Ruined Buildings – This was once a village

After finishing the Vlissinghe terrain boards, our next stage was to construct the ruined and semi-ruined buildings in the village. There were six buildings to be constructed - five houses and one church. I’d allowed 6 weeks for the building and painting of the buildings, but even with this fairly flexible timescale, constructing the model buildings took more time than I had anticipated (leading to a bit of a rush in the final week before the Crisis show on 7 November 2009). So much so that I had to rope various club members into helping at the last minute, and leading to one of my favourite maxims for wargame terrain construction – “Wherever possible, make it a team effort!”

I’ve set out in this blog post the basic stages we used in constructing the ruined buildings. It might be helpful, as a reminder of my earlier blog posts, to mention what we were trying to achieve. We were looking for an impression of a shell-shattered village in Flanders or France, but not one which had been completely destroyed. We wanted the village to add to the attractiveness of the participation game at the Crisis show in Antwerp, and we were prepared to sacrifice a little realism to do so. We could easily, and realistically, have modelled a pile of rubble on the terrain boards. But we wanted to create a village which had been lightly shelled – perhaps being a village around which the rear lines of the Siegfried Stellung had been constructed.

We also wanted the terrain to be practical for a wargame. We felt pretty strongly that it was no use having perfectly modelled terrain if no figures could be positioned within the buildings. So the buildings needed to display damage, but not be covered with rubble which might prevent them being useable wargames terrain. To illustrate how we went about achieving these aims, the blog post covers the basic construction of the village’s ruined café, De Witte Lelie.

Each of the buildings is constructed in broadly the same way. I find that it’s best to start with a plan, and again a series of rough drawings or ideas in a notebook helps. 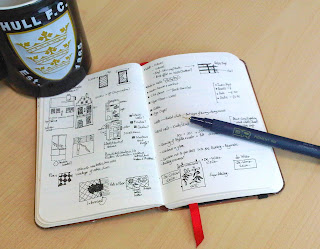 The first stage is to prepare the walls of the building. I used foamboard, being readily available and very easy to work with. The walls were cut using a new scalpel blade and steel rule, any measurements being done with a fair amount of care, especially on the café’s Flemish gable ends. 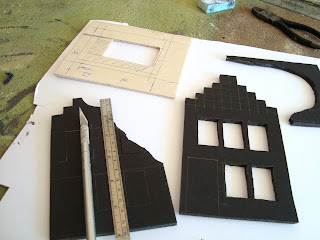 After cutting the walls, I added window lintels and sills, and a front door out of plasticard and cardboard. I added some brick effect to the exterior walls, sometimes using embossed plasticard and in most cases, as with the café, simply cutting squares of thin card to recreate a rough brick effect. 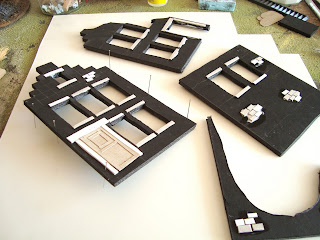 I tried to imagine what the building would have looked like intact, and helped with adding some interior walls. I didn’t bother with a staircase in most of the buildings - I found from other terrain projects that while a fairly intact building with full interior walls and staircases looks great, it has some disadvantages when actually using the buildings to inserting and remove figures during a game. This comes back to one of the terrain maxims I mentioned in an earlier blog post: "Think Macro, Not Micro".

The point when you first fit the walls together is hopefully (providing your measurements are correct, a rewarding moment! Although the building is far from finished, you can start to get the impression of a finished model building coming together. I used pins to hold the walls together in a “dry run” in order to check the overall fit, and also to check the precise floor are which would be available. 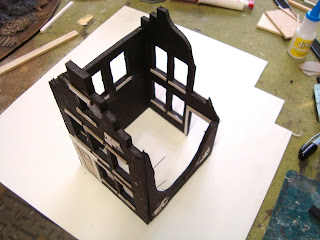 Once the walls are cut, the base of the building is the next step. I tend to use 1/8th marine plywood on all my 28mm scale terrain buildings because as it is very resistant to warping. I cut out a central section in the base (allowing the viewer to see through the hole into the cellar of the café) and then reassembled with a piece of card to hold the various pieces of wood together. The card was cut in such a way that a central hole would allow sight of the cellar, and the floor tiles could be scattered around the hole, adding the impression that the floor had fallen through. 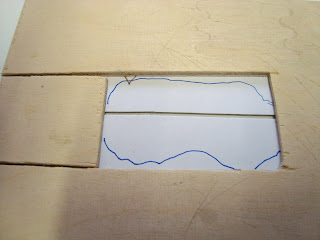 My original thought on this building was to build and paint the floor first, importing a dramatic (and, in retrospect, a rather over the top) black and white tiled Flemish flooring effect. However, as this would mean having to construct and paint the floor first, and then build the walls around , I decided that sounded like a plan for disaster. So I built the floor, scattering the “floor tiles” (thin card) and then prepared the walls for being glued into place before any painting had started. 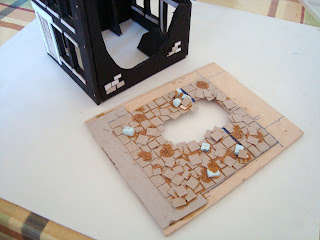 The walls were then glued in place with PVA, with dressmakers’ pins being used to hold the walls in place and provide extra support. I glued the walls to the base using an epoxy resin for extra strength and “painted” an extra coating of PVA along the corners of the walls to make the bonds tight before adding some doorsteps and leaving the whole model overnight to dry. 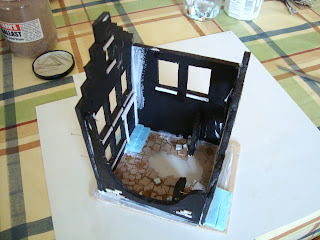 While drying I prepared the roof and upper floors. The method is fairly similar, essentially using a few scraps of foamboard, some balsa wood, coffee stirrers and more thin card. The floors were cut in a shape which can fit easily into a surviving corner of the building. The idea was to give a sufficient ledge to place a number of figures on to gain a clear height advantage over figures on the ground. The loft roof was solely included as a sniper’s position (a slightly “cinematic” concession). The foamboard floor was then covered in lengths of appropriately cut balsa wood or coffee stirrers, and left to dry. 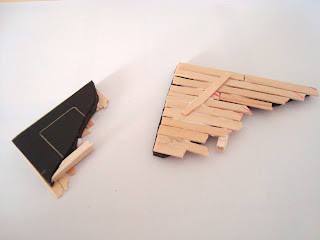 The roof was the same idea, although I used thinner card in place of foamboard for the roof, supported by some balsa roof timbers for effect. We found that in the other ruined model buildings which featured a large still-intact roof area, this had a nasty habit of impeding players getting their hands into the building to move figures around. With the village café, I therefore went for a I there went for a “cinematic” roof effect with a small area of intact roof timbers on one side of the building. It was a personal choice, but one which seemed to be reasonable bearing in mind how people had found more accurately ruined model buildings in other games at our club. Again, this follows another terrain maxim I’ve mentioned before: "remember you're building wargaming terrain, not a museum model". 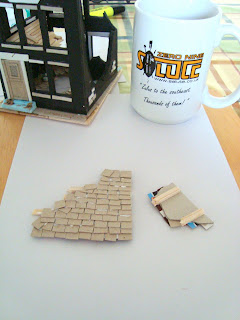 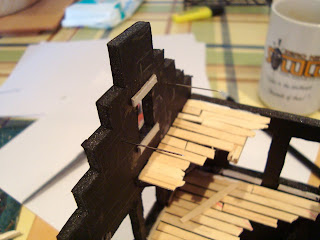 The roof and the floor were then added to the (now glued dry) shell of the café with more pins being used to support the roof and the floor areas. I found that the combination of the pins and PVA glue was more than enough to hold the floors in place, although I used epoxy resin to cement the roof onto the exterior walls and make a really strong bond. 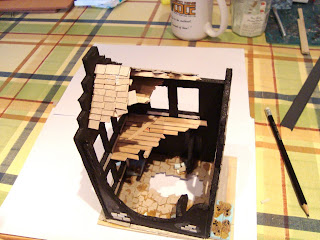 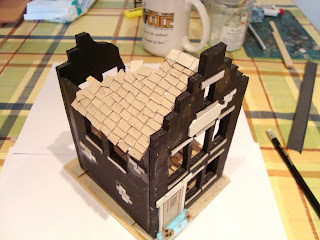 At this stage I wanted to add some more damage to the building. I wanted to add an impression of rubble and therefore scattered a mixture of grit and builders’ sand on the inside of the ground floor and some of the upper floors, as well as manufacturing a number of Styrofoam “bricks” for gluing into the corners of the building or on the outside of the remaining walls. I tried not to drop these bricks in the centre of the floor, leaving room for figures to be placed in the centre, and also leaving room for the floor-covering (of which more in the next blog post). 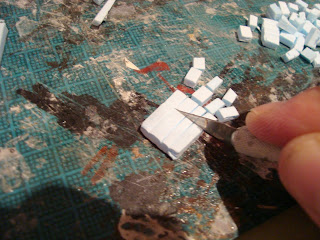 On some of the buildings I added Milliput sandbags and fallen roof beams, but I did not want to over-do this and so I ended up using that effect fairly sparingly. I also tried gluing the “bricks” onto the broken sections of wall. 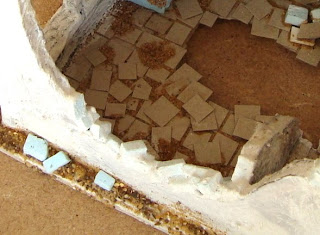 This seems right to me, but I can appreciate that many may say that the scale of the bricks should be smaller. However, I felt this looked right, and, in a “cinematic” theme again, that was the direction we were heading towards. 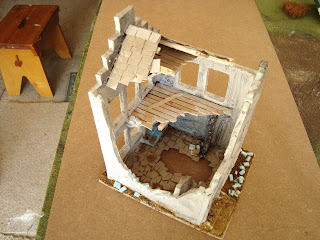 The final main building stage before painting was to make a thin wash of water, polyfilla (interior plaster) and PVA glue which can be lightly brushed over the walls of the building providing texture and generally strengthening the model. I used this only on the walls and not the roof or the floor (which was already scattered with sand and the odd Styrofoam “brick” or two).

I then had a basic finished building. To bring everything together, I spray painted the model black with a matt car spray enamel, the colour being a personal preference although grey would have done just fine as well and might have been preferred for an intact, undamaged model. 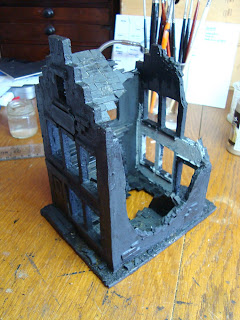 All that was then needed was to paint the building, which I did “inside-out” starting with the floor, and working up the interior walls and finishing no the outside and the roof. That got us to the point when we could use the building on the wargames table and practice the participation game, a sort of “95% finished effect”, if you like. 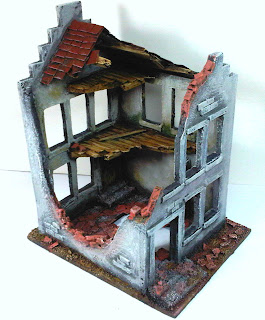 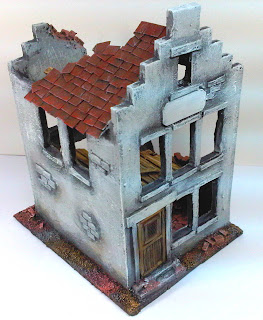 In my next blog post, I’d like to offer some suggestions on super-detailing and ways in which to bring the model to life and get that “100% finished effect”.
Posted by Sidney Roundwood at 11:12