Together with other members of the TooFatLardies roadshow, I headed down to the South East London Wargames Group’s SELWG 2010 show yesterday with our American Civil War participation game of “Terrible Sharp Sword”. This is the expansion for the ACW to Richard Clarke’s “Sharp Practice”, his really successful Napoleonic skirmish rules. We’d planned to “demo” a couple of participation games at SEWLG on the boards Richard had originally made about three years ago when “Sharp Practice” was first published and demo-ed at the International Napoleonic Fair in Essex. 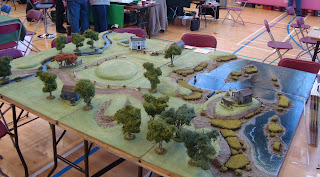 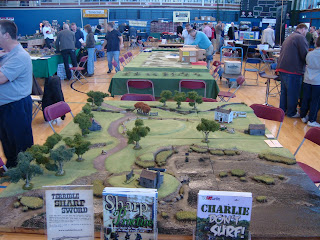 When the terrain boards were first made, Richard had set them as a beach line with a couple of small hills with a Martello Tower on the dunes. During the last couple of weeks, he’d turned these into a muddy part of the Mississippi delta, with a Southern mansion, moonshine tavern and a fishing shack. Although one of the players mentioned it looked quite a bit like Essex…..”Canvey Island mudflats is it?”.....I thought the effect was great and even better than the old beach terrain we’d started with. 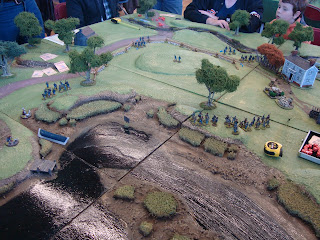 Our participation game was pretty busy throughout the day. We met some great people. There’s little in the hobby which is better than meeting new folk and chatting through with them what they’re working on, what it is which is interesting them right now, and finding out how their clubs are doing. The games seemed to down pretty well with the playing public, and we had full teams for the Unions and Rebs both days, which is always a relief so that my very dubious tactical skills are not called into use. Here’s some snaps of the game being played. 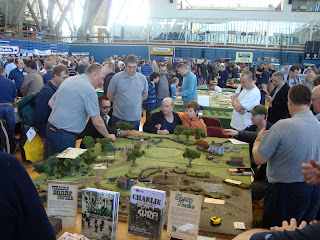 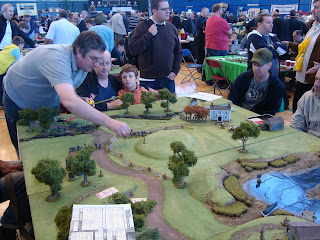 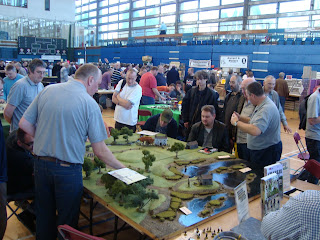 It was also a good time to meet up with some old friends, although sometimes all too briefly as I saw them disappearing off to their cars with mountains of terrain, games and figures throughout the day.

The SELWG show seemed busy in the morning, a little less in the afternoon. I guess that’s the usual way, and it seems to happen at most shows. I can only think that the exception I’ve been to was Vapnartak in York in its old venue of the Merchant Adventurer’s Hall, but that might be because people could not actually get into the tiny venue in the morning and had to wait until after lunch to get a look round!

I thought that the venue, the National Athletics Arena at Crystal Palace, was pretty good. It’s a bit strange sharing a wargames show in the same building as a swimming pool, but that mix didn’t seem to cause anyone a problem once you got used to looking at metal figures in sight of someone doing the backstroke. The games were concentrated in the main Basketball Hall with the traders around the edge of the hall, and that arrangement seemed to keep everyone pretty happy. 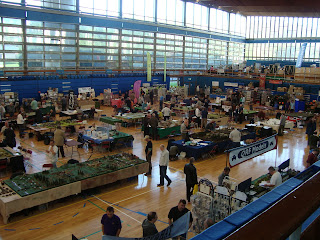 As for games, I spotted some really inspiring ones. Pride of place for terrain went to Shepway Wargames Club with their “Hochwald Gap” game from 1945. This was a staggering piece of work, with a fantastic evocation of a cold scene from January 1945. Every element of the terrain and figures shouted "winter", from the barren hedgerows, the frozen grass, the muddy roads and tracks, the winter-whitewashed tanks or the dead leaves around the blackened trees. 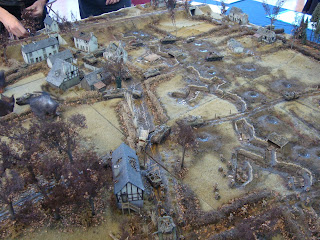 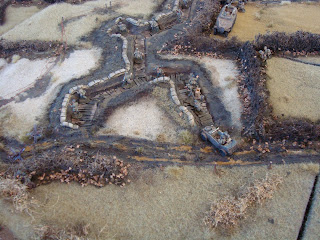 The display had some really great touches in the modelling of the vehicles and figures including muddy wheels and scratched paint work. A couple of RAF Bostons completed the look. 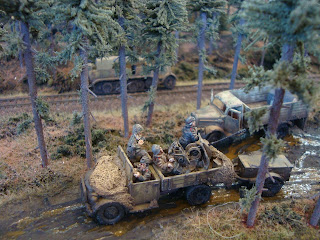 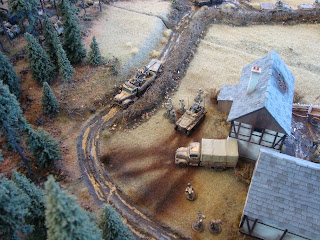 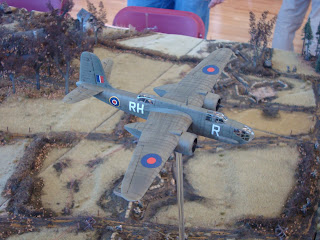 All of which took a huge investment of time and enormous effort by the Shepway guys. The guy I spoke to ruefully mentioned he was looking forward to not looking at another 20mm wargame figure for a month of so. I think we’ve all been there at some point, although the game he’d created was a real stonker.

Another cracking game was Southend Wargames Club’s Great War battle with French and Sikhs attacking a German trench line. I thought this was a game with a little of everything…… well thought out terrain, an interesting scenario, some fantastic conversions of Great War Miniatures figures into Imperial Sikhs and an attractively modelled town. 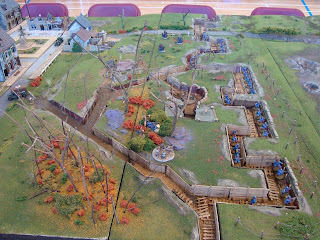 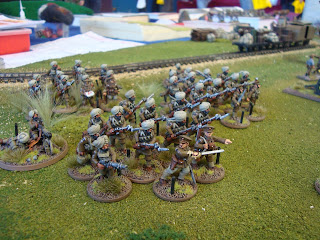 Like the Shepway bunch, the Southenders were very friendly and I came away with a load of ideas about building an MDF pillbox, some artillery dugouts and a ruined car or two. I doubt my photos really do it justice, but it was a great game and being played in a terrific spirit whenever I wandered across to take a look. Expect to see their great ideas respectfully emulated (a.k.a. respectfully ripped off) in some of my own terrain extras over the course of the winter! 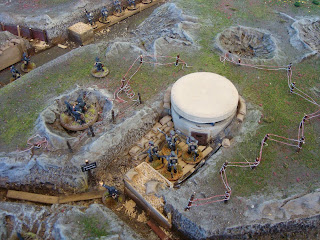 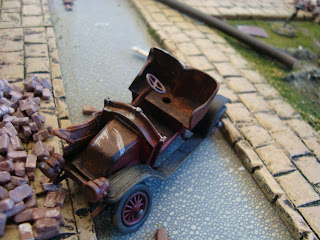 Also really well done was the fact that the Southend chaps had converted part of the wargames table as a small library of Great War books and troop deployment area. This was a nice touch. I’ve seen it done before in a couple of games, but this was right at the top of the gaming area, giving the punter a chance to look at the models, gave a read of the game scenario and take a browse through some books on the War before they looked over the game. A great touch, I thought. 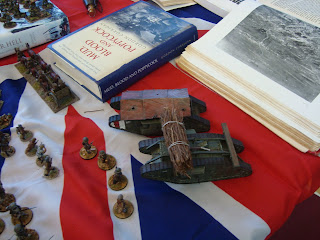 There were lots of other fine games going on, but the last one which caught my eye was the Loughton Strike Force’s recreation of Davout’s attack at Wagram from 1809. I’m far from an expert on the Napoleonic Wars, but what I saw looked like a near perfect game of Napoleonics…..smart terrain, a table nicely full (but not over-burdened with units), clear unit indicators and casualty markers and again some really welcoming guys playing and explaining. I’ve seen the Loughton games before at Salute and the International Napoleonic Fair and I’ve been very impressed. Wagram 1809 was no exception. 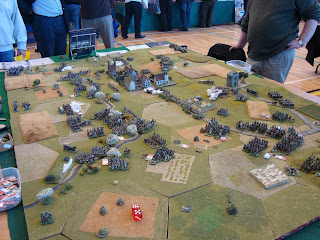 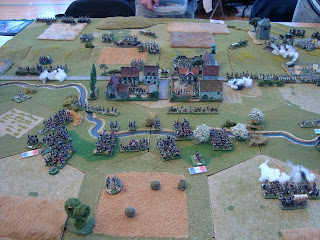 The journey back wasn’t too bad. I was still feeling fairly chilled by the end of the day. I realised yesterday that meeting and greeting punters and other wargamers is far less knackering than running a participation game and explaining how the rules work, making sure the players are having a great time and the thousand-and-one-things you have to do with a participation game.
Oh…did I buy much, I hear you ask. Well, it was a wargames show and I like to help the traders as best I can! I picked another Kaiser Rushforth case for when I’ve finished the Great War French, and three books. I’ve wanted to read “Come On Highlanders” for a while, and the “Passchendaele: The Hollow Victory” looked interesting. I picked them up for £8 each. 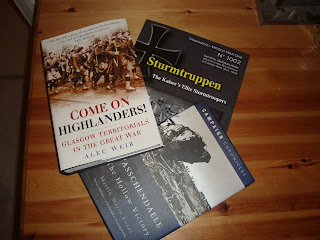 Seeing “Sturmtruppen” book was a genuine surprise, as I’d not seen it advertised. I have the Tankograd book on the A7V, which is fantastic. I felt I’d get the same original insight and photos from the “Strumtruppen” book, and a quick look last night confirmed that it’s packed with new photos and seems to have new analysis of the stormtroops’ tactics. So, all in all, a grand day out!

Posted by Sidney Roundwood at 13:20 2 comments: