We played through another of our trench raiding “Winter Sports” games last night, this one being “The Wiring Party”. Unlike the other trench raids over Christmas, this game was not part of the original “Winter Sports” article but was one of a number of new scenarios we are play-testing which I’m hoping to make into a mini-campaign focusing on some of the minor actions of a battalion on the front line in the Great War. I also tried to include a “game within a game”, focusing on the search for a wounded officer led by an inspirational Anglican Chaplain, but more of that in a minute!

First, a little by way of introduction. Wiring duties were probably one of the least popular tasks for troops in the trenches. Barbed wire defences needed to be maintained constantly, whether from shelling, attempts of the enemy to damage or destroy the wire at night, or just to keep the wire clear of any bodies. A wiring party would be formed under the command of an NCO and, under the cover of darkness, would leave the trenches to perform maintenance on their wires, as well as investigation of the status of the enemy's own wire. From time to time, these wiring parties might be accompanied by an attempt to rescue wounded survivors from a recent attack. It was far from unusual for wiring parties to meet their enemy counterparts in no man’s land and for fierce hand-to-hand fighting to take place, accompanied by machine gun fire, flares, star shells and sometimes trench mortar or artillery barrages.

The game started at the end of a tough days fighting. A British Division’s attack on strongly held German lines had not gone as well as expected. While the British assault battalions had carried the first line of German trenches, the second line has remained in German hands. The German second line is protected by a belt of wire which has been damaged in the initial British barrage. The new “No Man’s Land” between the first and second German lines is now littered with the bodies of both the British and German fallen.

The picture below shows the table I came up with. The paper squares indicate the location of wounded soldiers in No Man’s land who need rescuing. 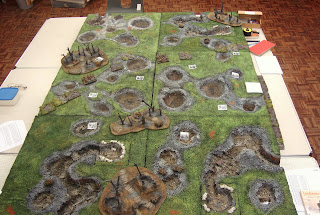 The primary mission for the British commander, Second Lieutenant Jasper Whitechapel (played by Elton), was to discover the strength of the German wire and prevent the enemy’s wiring parties from effecting repairs. The British player also was aware that his inspirational company commander, Captain Rupert Romford, was missing after the attack earlier in the day. The British player was told that, if at all possible, Lieutenant Whitechapel and his troops would want to rescue their commander from a grim fate in No Man’s Land. In that mission, the British player could call on a very special Big Man, The Reverend Charles Upton-Park better known as “Capstan Charlie”, and two RAMC stretcher bearers.

The German commander, Feldwebel Lothar Schmidt (played by Big Al), was tasked with leading a small team of pioneers into No Man’s Land to repair the wire, under the protection of a platoon of grenadiers.

Both players were told that once fighting hard started and once the alarm was raised, they could call on the support of a machine gun firing on a fixed line and, for the German player, a Granatenwerfer 16. 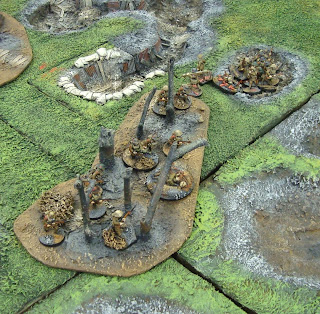 A section of engineers and trench raiders advanced to try and scout the enemy wire.... 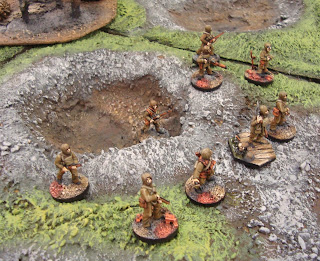 ....while a section of bombers advanced to the right of the wood under Corporal Vince Shadwell, feeling for further gaps in the wire in the darkness. 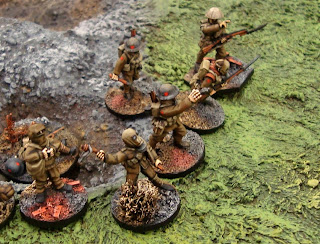 The German defenders quickly opened up with rifle fire on Corporal Shadwell’s position, although a supporting party of German soldiers under Gefreiter Johann Kleist was quickly pinned down the Lewis gun firing from Camden Copse.

On the German right, Gefreiter Rudi Vogel had pushed forward with a group of pioneers into Crow Wood aiming, optimistically considering the carnage unfolding, to commence re-wiring across the German front line. 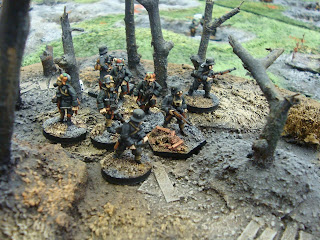 In amidst the chaos of starshells and flares being fired into the night sky, Gefreiter Vogel stumbled across a badly wounded British Officer in Crow Wood. It was Captain Romford. The Captain was quickly escorted, minus pocket-watch, to the German trench line. As the identities of the wounded soldiers were randomised in the scenario, the fact that Captain Romford appeared across the German wire and in Crow Wood made the British task of capturing him pretty much impossible. Mea culpa, on my part – well, I did mention this was a play test! 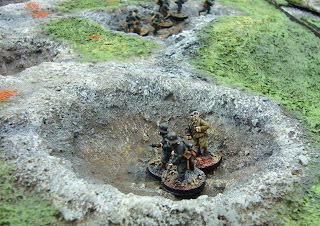 On the British side of the battlefield, great and noble things were being done by “Capstan Charlie”. The first “wounded soldier” he attended to was, sadly, already dead. The second, Private Alf Bethnal, was badly wounded and was taken by the stretcher bearers back to the British lines. At this point, “Capstan Charlie” proceeded under fire to attend upon a mortally wounded German soldier in an exposed area of No Man’s Land in an attempt to administer the Last Sacrament. 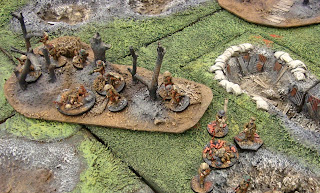 While the brave Chaplain went about his business, both British and German machine guns firing in a sustained fire role were deployed (the German in their trench, the British off-table but marked with a model). While neither fired many times owing to the need to avoid hitting their own troops, the fire power they deployed neatly bisected the table, pinning down a number of opposing groups. The deployment of the German Granatenwerfer 16 also added to the discomfort of a couple of British sections sheltering in shell craters. 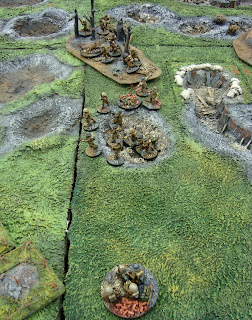 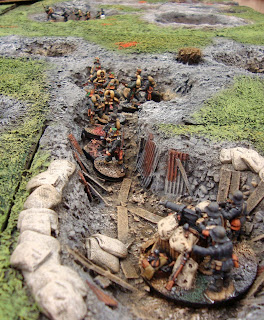 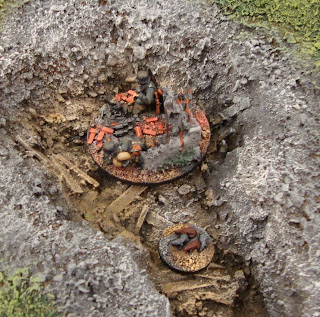 With casualties amongst the sections closest to each other mounting, both a British and a German section lost their “bottle” after loosing their junior NCOs, and both sides started to disengage from the vicious fire-fight. As “Capstan Charlie” administered the Last Sacrament and cast his eyes around the battlefield for other soldiers to help, the game drew to a close with growing casualties on all sides. 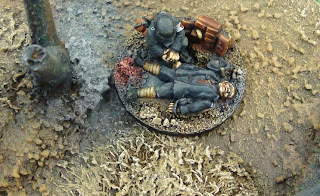 So, an enjoyable game, played in a great spirit by Big AL and Elton, but one which needs a little tinkering with as regards a number of scenario features. I felt that expecting the German player to fight forward to repair the wire was very challenging. The game would be better started with the German pioneers working on the wire, under cover of their platoon or sections, and being disturbed by the British. The sustained fire machine guns would have totally dominated the later stages of the game had it not been for intervening friendly forces, and this probably contributed to the final stalemate.

Finally, I was pleased with the introduction of “Capstan Charlie” into the game. While the rules need a bit of work, I liked the addition of a non-combatant into the game, particularly where he might be able to commandeer a couple of otherwise-fighting troops to help him recover wounded from the battlefield. For those interested, “Capstan Charlie” is modelled (with great respect) on the historical figure of "Woodbine Willie". More details of some of the remarkable chaplains of the Great War are available here. 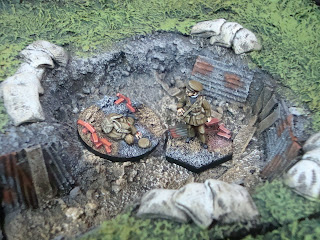 Posted by Sidney Roundwood at 15:06 8 comments:

One of my favourite wargaming blogs is Big Lee’s Wargaming Adventures. In addition to a succession of topical, hobbying, wargaming or modelling posts, Lee sometimes throws a complete curve-ball in. His post today on Wordle was one of these. The temptation to do one myself was too great!

Here’s the blurb from the Wordle site: ‘Wordle is a toy for generating “word clouds” from text that you provide. The clouds give greater prominence to words that appear more frequently in the source text.’

I plugged in Roundwood’s World, and this was what I got, in suitably earthy, Great War muted tones. 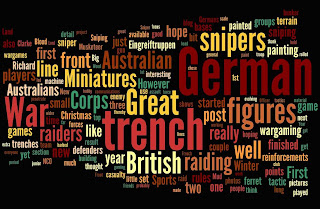 Making the word cloud was a lot of fun, and I liked the final result. So, a short blog post from me today, but hopefully enough to recommend both Wordle and Big Lee’s blog. Give them both a go!
Posted by Sidney Roundwood at 11:27 6 comments:

A few people out there might know that I’ve been working on adapting the “Winter Sports” article which Richard Clarke wrote for “Through the Mud and the Blood” into a larger mini-campaign in which the player, or players, take command of a platoon or company in the trenches on the Western Front. One of the aspects I’d like to include are the smaller missions and actions which an almost daily occurrence for the troops in the front line. Within that group I’m hoping to include a mission or two focusing on sniping.

I wasn’t previously aware that (like so much of the action in the War) sniping, and counter-sniping, evolved its own complex patterns and tactics. Sniping could disrupt formations under fire, inflict casualties and wreck any chance of an easy truce evolving between the front lines.

As one soldier wrote “The sniper is a very necessary person. He serves to remind us we are at war. Wherever a head, or anything resembling a head, shows itself, he fires. Were it not for his enthusiasm, both sides would be sitting upon their respective parapets regarding each other with frank curiosity, and that would never do” (“Trench Warfare: The Live and Let Live System”, page 57).

So, I felt I needed some snipers. There are some fine ones available from Great War Miniatures – four very nice German snipers and a British counterpart (which I’ve not yet painted). I also really like the British sniper set available from 1st Corps (which paint up well as snipers of any nationality). At first, I thought that the figures looked a little bit contemporary. However, a lot of the photos in the books mentioned below show that the art of camouflage was well understood by Great War snipers, with “ghillie suits” and loose hessian robes sewn with grass and tufts of green and brown material being worn by both snipers on both sides. 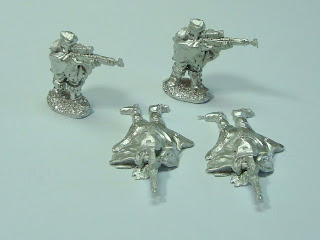 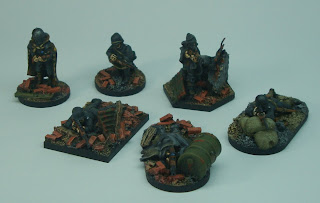 And here's the British snipers to balance up the numbers: 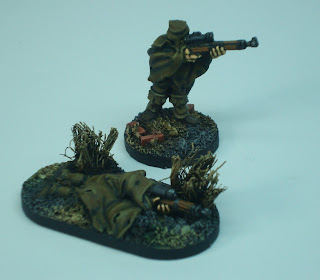 I tried to make sure that the snipers were painted in some random early camouflage pattern but, reasoning that there probably was no “pattern” as such, I just made it up. 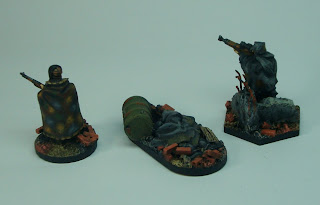 I found the most useful and interesting book about sniping and sniper tactics to be Major H Hesketh-Pritchard’s “Sniping in France”, an auto-biographical account of establishing British sniping schools. Peter Senich’s “The German Sniper 1914-1945” was also good, but with far more material on the Second World War than the First. The Osprey “Military Sniper since 1914” by Martin Pegler is a handsome book, but his “Sniping in the Great War” adds much more detail, especially about the Commonwealth snipers. 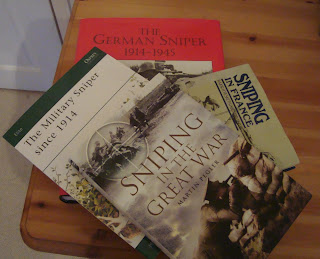 “Through the Mud and the Blood” covers snipers and their weapons in a fairly abstract way, which I do not suggest anyone changes. But the individual art of sniping, although fascinating, is just part of a wider story of how snipers were deployed, and countered. I hope to offer more about that wider story in future blog posts.
Posted by Sidney Roundwood at 17:47 5 comments: