It is Christmas Eve.  Gosh, it has come round quickly, again! 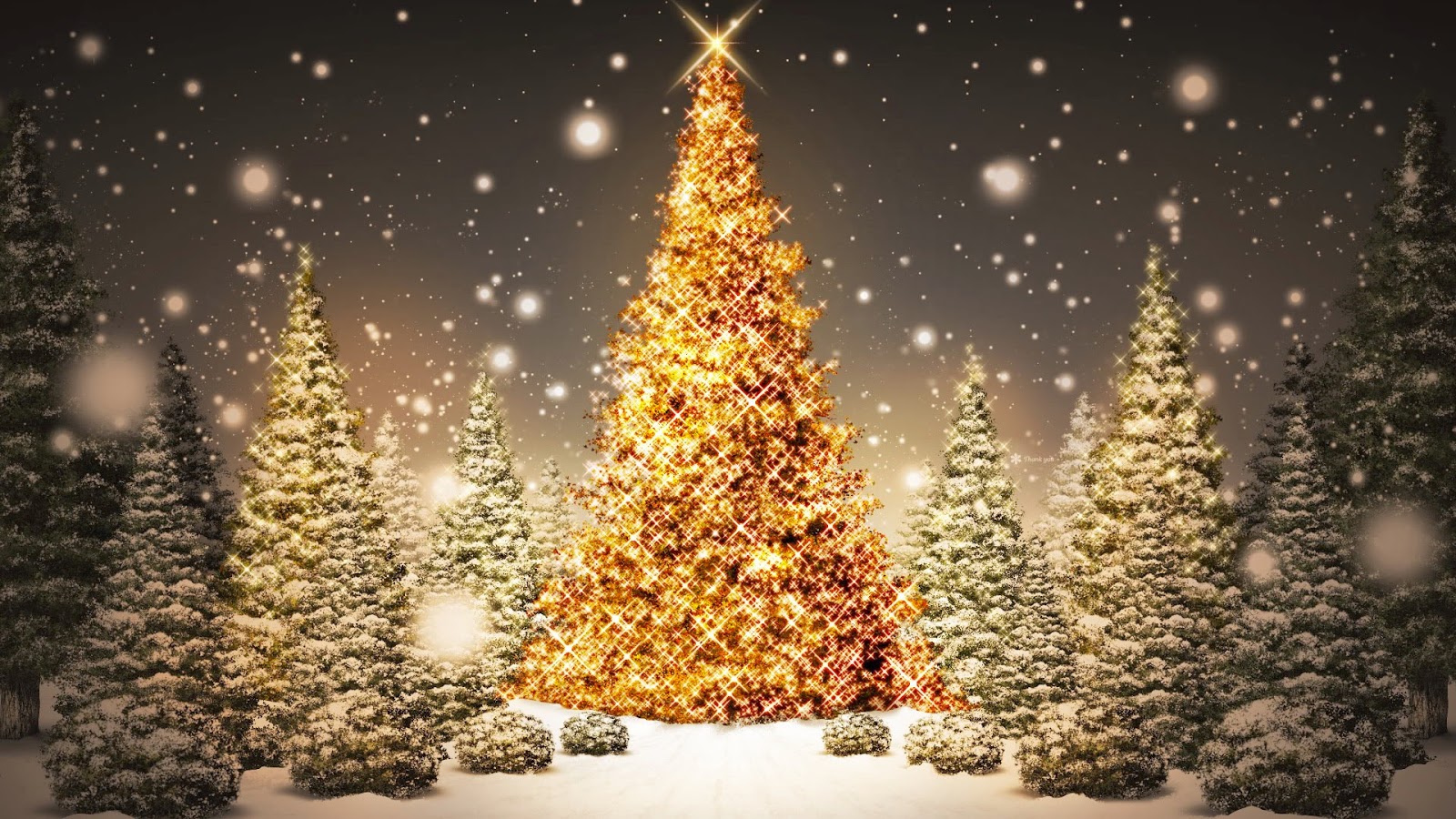 I hope everyone reading this, following the blog and looking at the various tweets I'm posting (as Roundwood's World) has a wonderful Christmas.

And at this time of year I think of friends who may have had a tough old year, or who are far from home.  My heart-felt good wishes for the season go out to all of you.

And also, in particular, I think of friends in the blogosphere who will not be with us this year, and of their families who will find this a difficut time of year.  This Christmas, I particularly remember two greatly respected and much loved personalities from our hobby who passed this year - blogger Captain Richard, and wargamer (and grumpy old chap) Allen E. Curtis.  Their kind words and grace blessed me many times, and I shall never forget them.

To Richard and Allen's families, I wish you all the blessings of Christmas.  I shall be thinking of both Richard and Allen tomorrow, with great fondness.
Posted by Sidney Roundwood at 21:07 52 comments:

Email ThisBlogThis!Share to TwitterShare to FacebookShare to Pinterest
Labels: Blogging and the Blogosphere, Christmas


As mentioned in my last post, I made the trip to Dragonmeet 2014 in London a couple of weekends ago. This was my third Dragonmeet in a row, and the first in the convention’s new location of the Ibis Hotel, Earl’s Court.

I had a great time. The convention seemed bigger and busier than ever before. In addition to roleplaying and boardgames, the show has grown to encompass miniature gaming as well. There were demos of “Dead Man’s Hand” a couple of zombie-themed games, as well as trade stands from a decent number of miniature manufacturers and retailers (North Star Miniatures, Hawk Wargames, Warlord Games).

The gaming halls were packed with every roleplaying/ boardgamining variety and combination of games you could think of. “Zombie/Nazi/Occult/Godzilla mash-up, Sir? – you got it. Table 48 on the right”. “Old-school Village of Hommlet – ah yes, upstairs by the bar”. All gaming life seemed here, and a pleasure it was to behold.

For me, though, pride of place should go to Ashley Pollard’s fantastic Ogre/ G.E.V. game, which I was pleased to see was placed right in the centre of the gaming hall. Ogre for me is a game which always conjures up 1981. It was one of the games I discovered at my school wargames club, and I’ve never forgotten. There was something about the combination of strange alien planets, monstrous armoured leviathans, hordes of space-suited infantry rushing over the battlefield on hover tanks, and accessible and fun rules which caught my eye then. And still does. 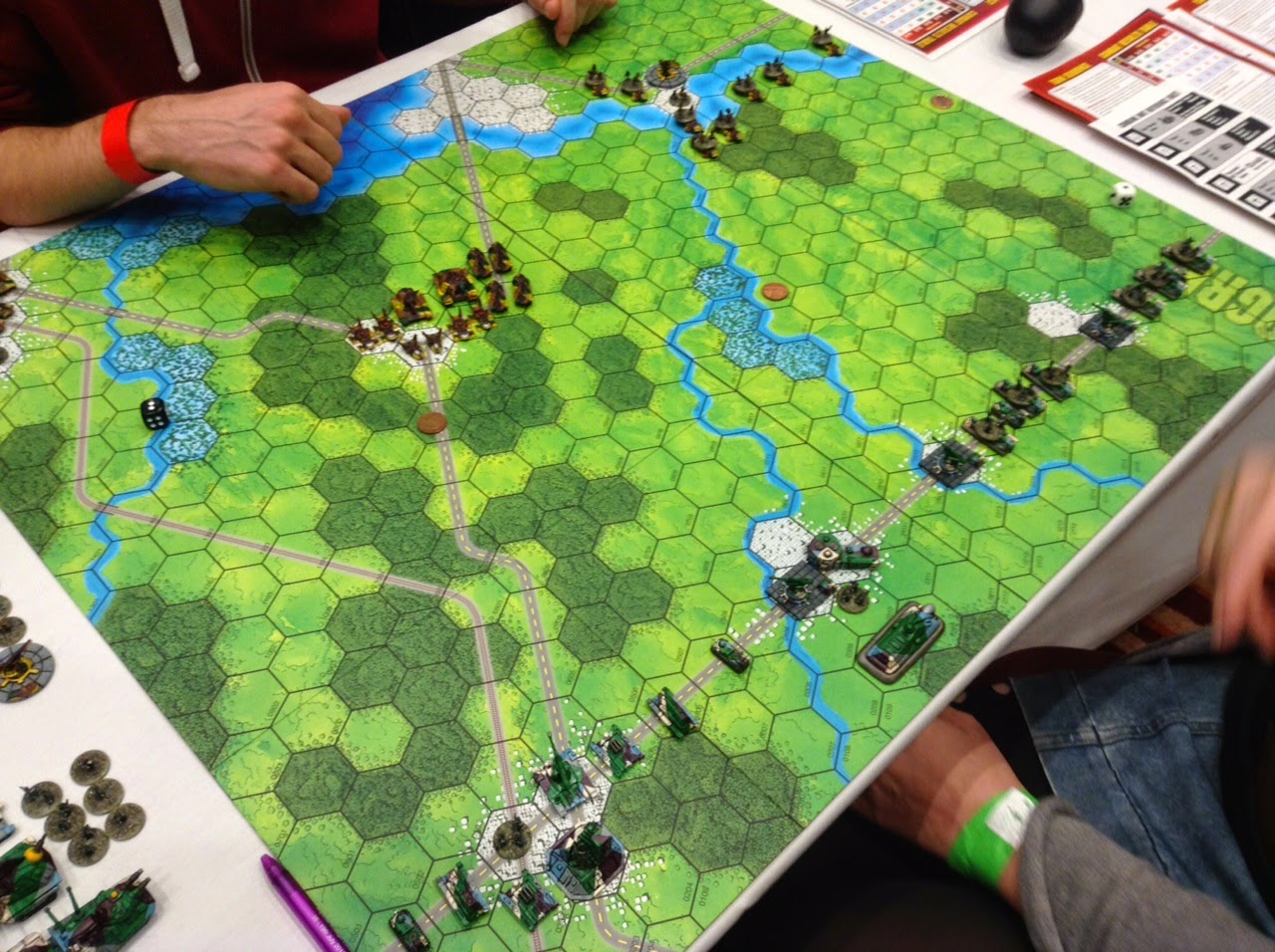 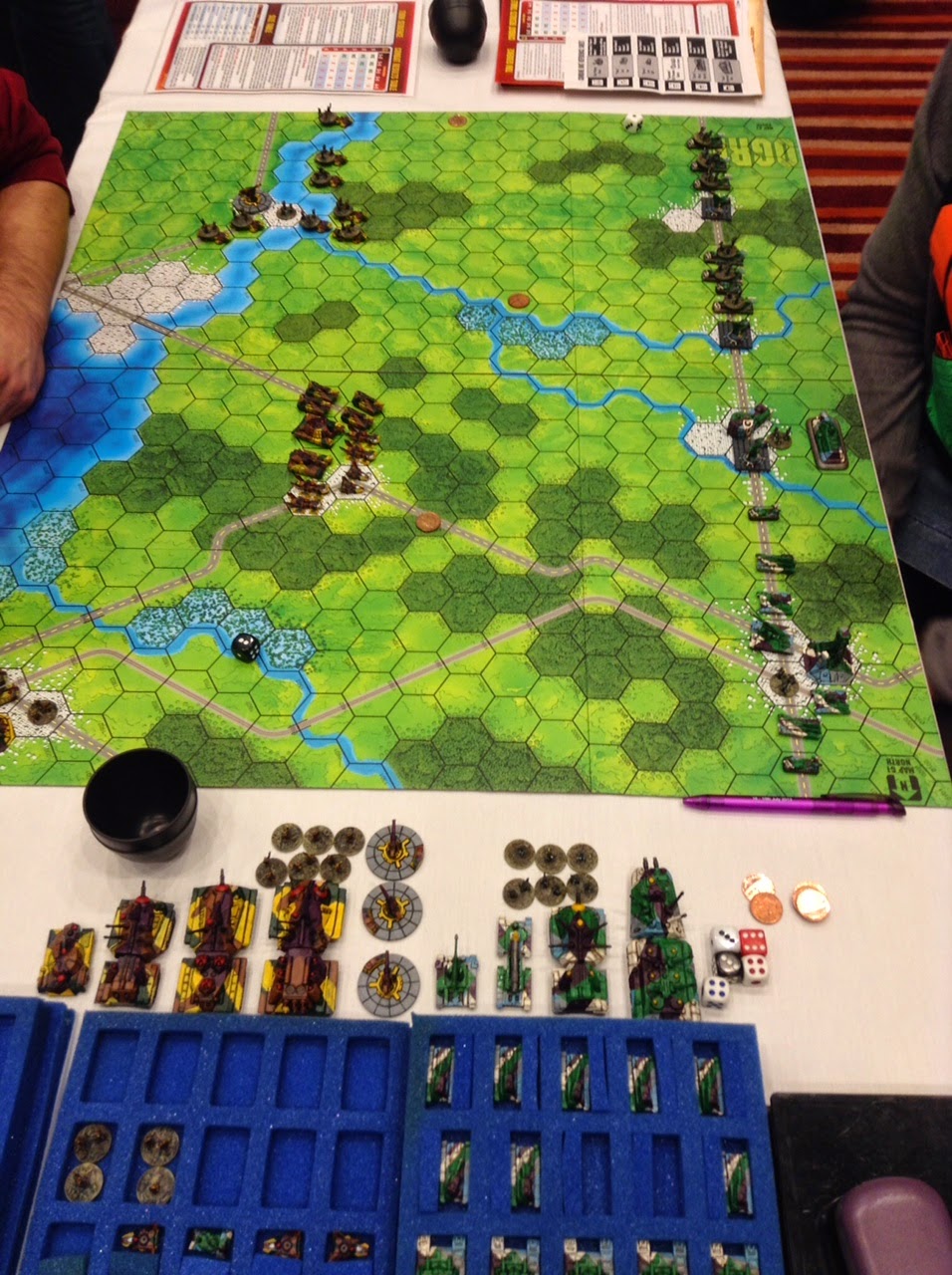 Ashley’s games have always captured that for me, and it was great to catch up. Her collection of Ogres, armour, grunts, mobile command centres and recon vehicles was enough to hypnotise any gamer. She umpires a great game as well – always good to see. Awesom stuff!

In addition to the games and gamers, the other thing I love about Dragonmeet is the lectures. Paco Garcia Jaen had done a wonderful job this year of arranging some terrific presentations but a luminous cast of speakers. The great and the good of roleplaying were definitely in evidence, but it was great to see speakers who were less well known, and who contributed their own take on the roleplaying world. I was desperately disappointed to miss Johnny Hodgson’s talk on art direction for roleplaying and boardgaming game publishing – I was cheering my son’s football team on a cold, rainy north London pitch at the time. I did catch up with the afternoon panels though, including a live version of the podcast “Ken and Robin talk about stuff”. The stuff talked about was as witty, erudite and funny as ever. If I could talk about anything as well for 5 minutes, I’d be a happy man! 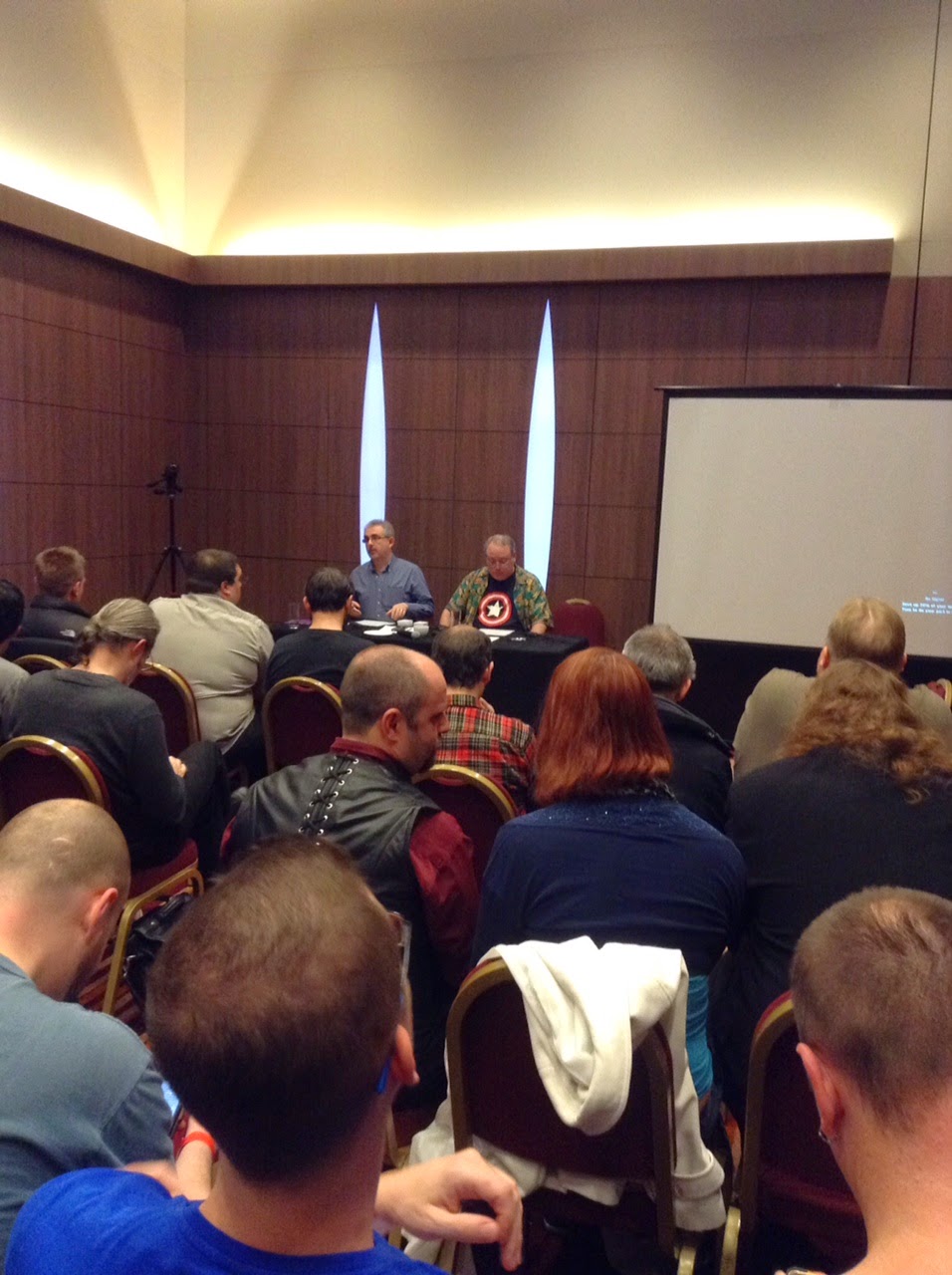 All in all, this was a wonderful Dragonmeet.  I'd like to say a huge thank you here to all the organisers of the event, the speakers and the staff in the Ibis hotel who were a model of courtesy throughout. If you get the chance to attend next year, I would thoroughly recommend it.

The day’s loot consisted, for me, of a pre-ordered copy of “Dreamhounds of Paris” and the "Livre de Fourmis”, by Pelegrane Press, and both chiefly authored by Robin Laws. Both Robin and co-author Ken Hite graciously signed “Dreamhounds”, very sportingly answering my questions and shooting the breeze for a couple of minutes. 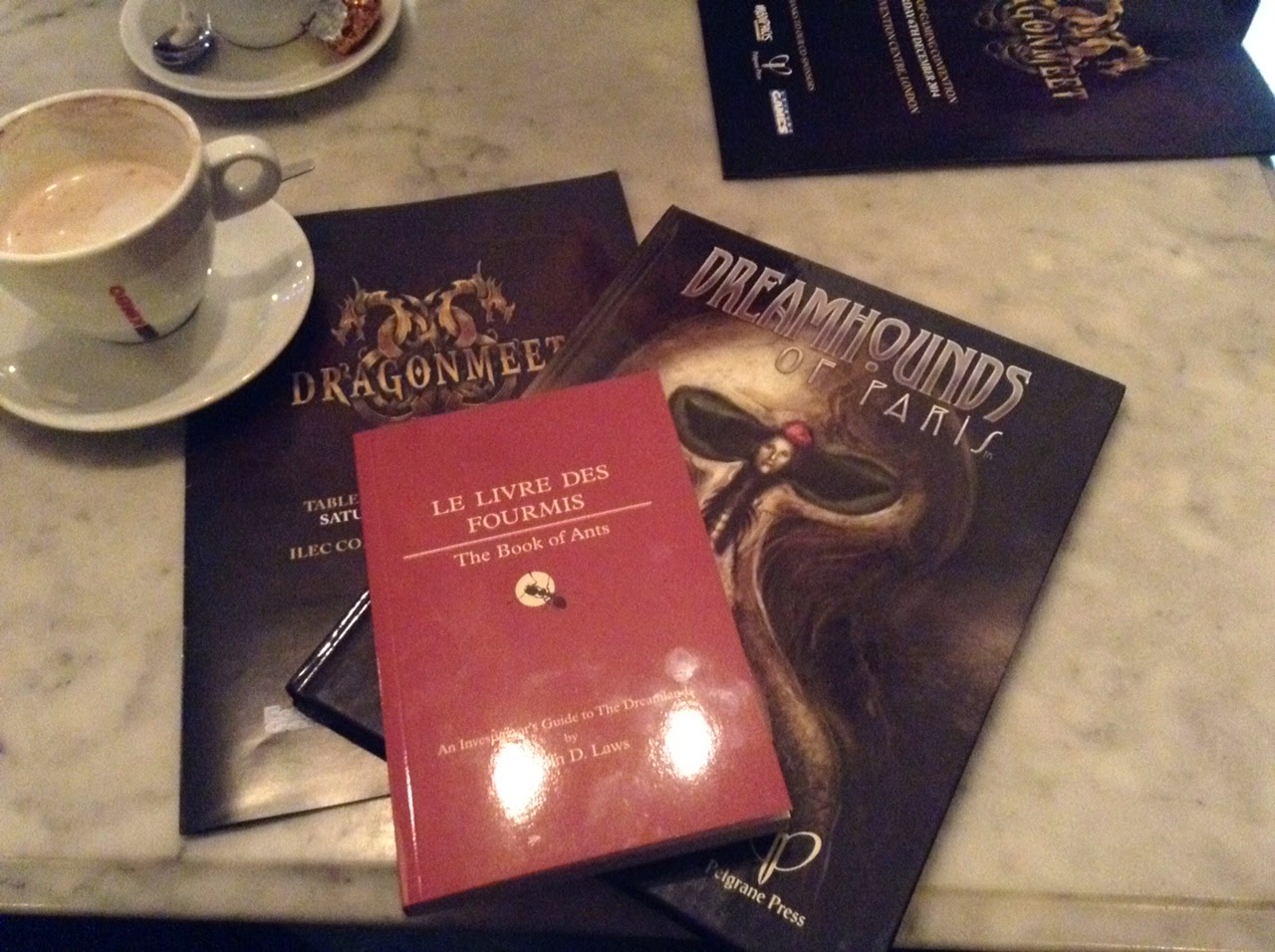 I always feel tongue-tied when asking authors to sign a book.  I end up saying something pretty lame like "I really enjoyed your last book", or "I'm really looking forward to reading this one".  As a default mechanism, I normally just go into "polite mode", but I feel this desn't really go anywhere towards showing appreciation for authors who make a long trip to a show or convention and take the time to meet their readers and patiently answer questions.

I tried harder this time, and actually came with something to say in advance!  I mentioned to Robin about how much i was looking forward to his books, and talked about my first trip to Paris in 1981 when I was 14 (with my French Exchange family) to see an exhibition of paintings by French surrealist Yves Tanguy.   That trip, and Paris, has always stayed in my mind.  So Robin, if you read this, thank you so much for listening patiently, and for the lovely ants you drew in my book! 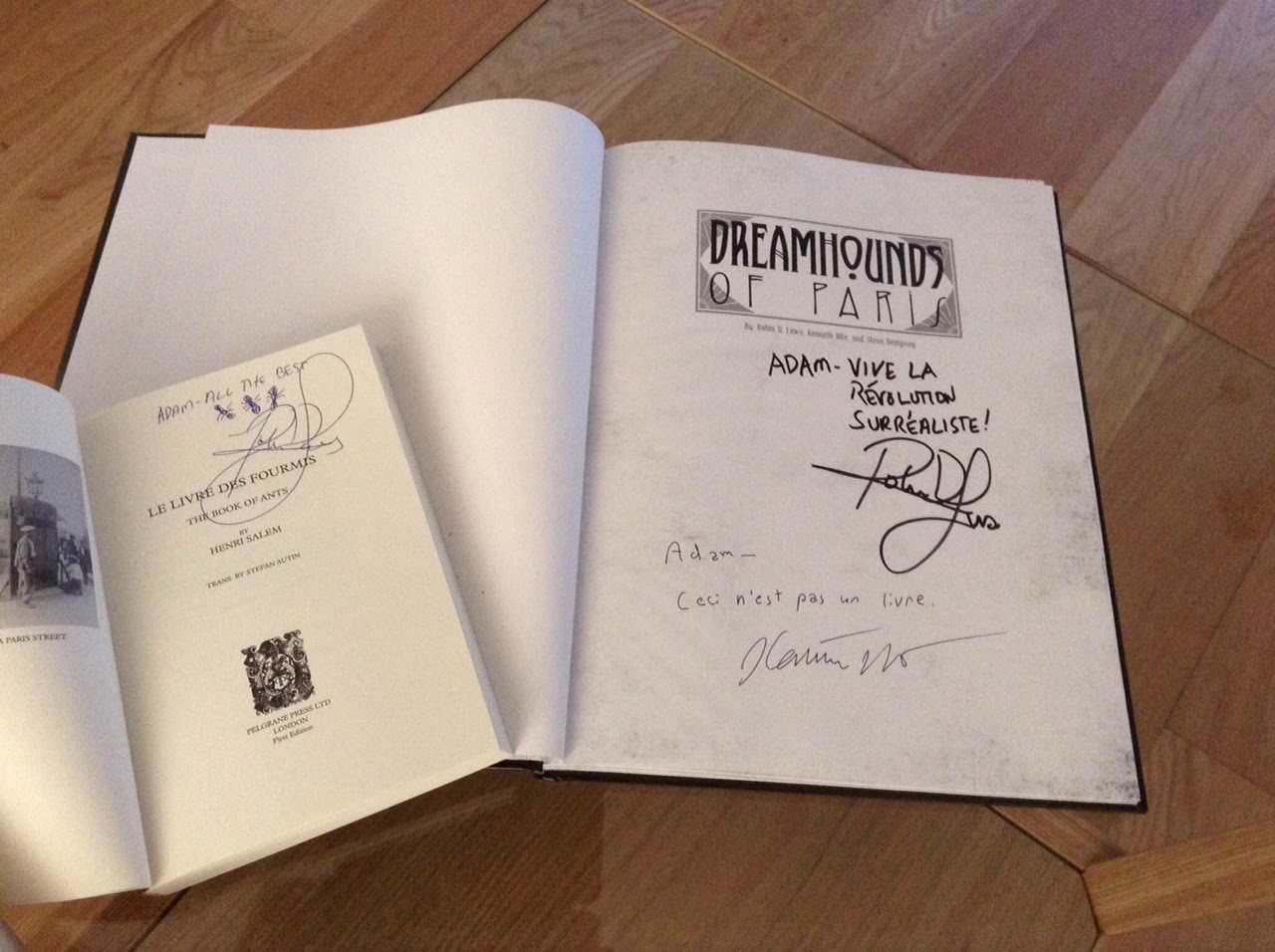 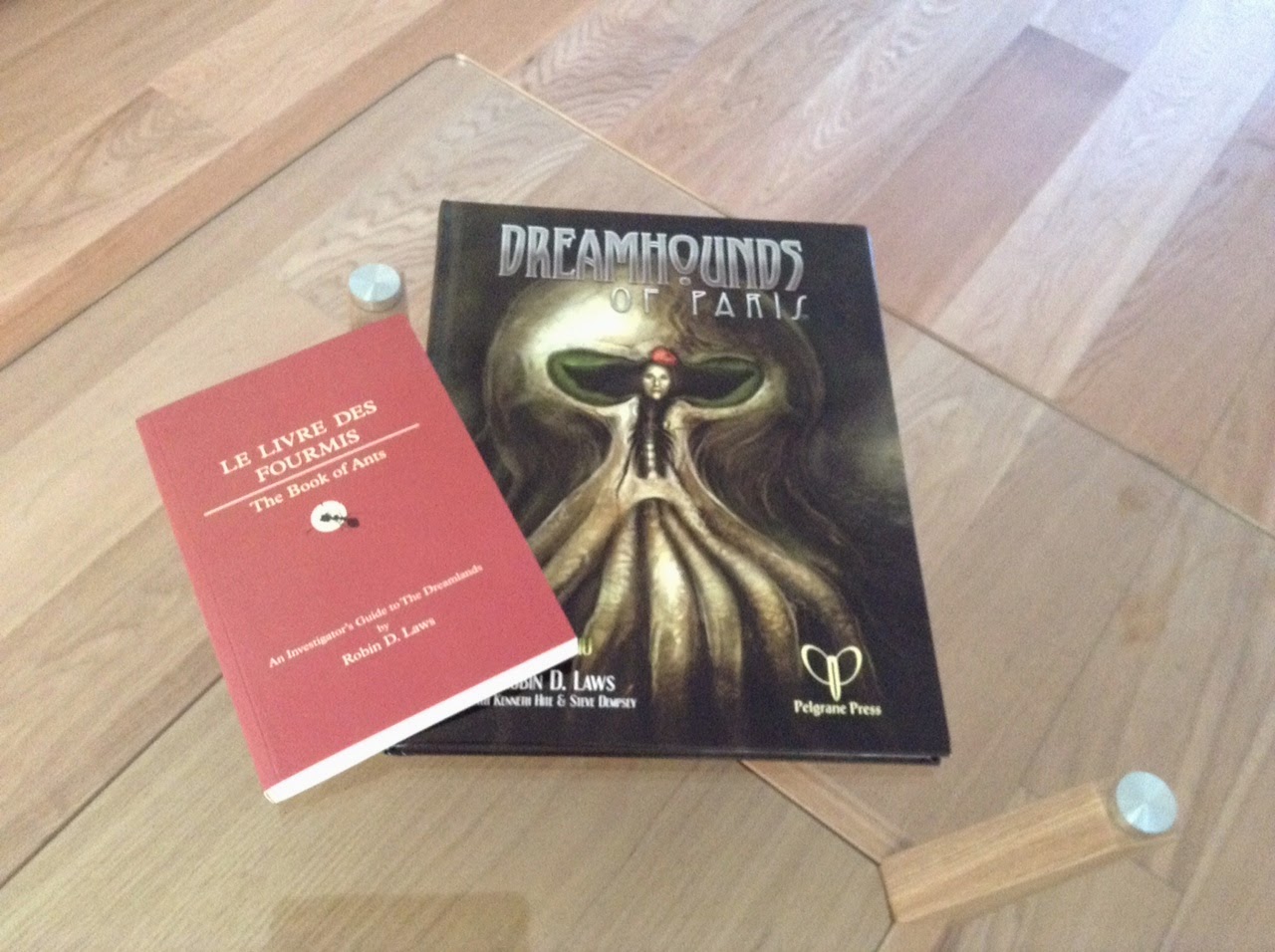 I’m in the process of reading the PDF copy of Dreamhounds (which Pelegrane Press send you for free when you purchase the hard copy book) on my daily commute. Even if you’re not a keen, or practising, roleplayer, there is much in Dreamhounds of Paris to love if you even have a passing interest in any of the following: Paris, the 1920s, Surrealism, the Cthulhu Mythos, French Occultism, beautiful books, fantastic art design, or wonderful writing. Very highly recommended.

One final postscript to picking up my copies of "Dreamhounds of Paris" and the "Livre de Fourmis" at Dragonmeet.  I'd pre-ordered these from Pelgrane, really becuase I wanted to show my support for the project (which I'm very excited by).  Yesterday, Cat from Pelgrane (out of the blue) went to the trouble of refunding my pre-paid postage on my debit card, and emailed me telling me she'd done it.  Exemplary customer service, very thoughtful and deeply cool.  Many thanks indeed, Cat and Simon!

Finally, for those of you wondering where on earth all my painted figures are for the start of Curt’s 5th Annual Painting Challenge, I have to confess that I’ve been delayed somewhat through being busy at work. December is always a frantic month for me work-wise, and this year it’s been doubly so. Long nights and busy weekends with the family have kept me away from the brushes, although I’ll hopefully be catching up fast by the end of this week. Fingers crossed for getting off the mark!
Posted by Sidney Roundwood at 06:39 4 comments:

Email ThisBlogThis!Share to TwitterShare to FacebookShare to Pinterest
Labels: Blogging and the Blogosphere, Paris, Trail of Cthulhu, Wargame Shows

Yes, it is that time of year again. By my watch, it should be about midnight in Regina, Canada on the 5th December just around ..... now. Which means that the Fifth Analogue Hobbies Painting Challlenge should be well and truly under way in the home of one Mr Curt Campbell Esq., and indeed throughout the world and known universe. 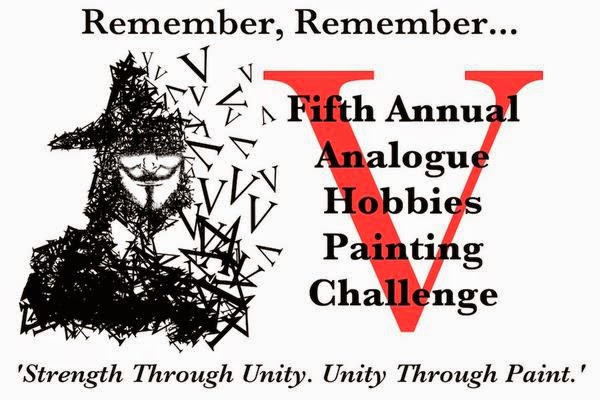 I'm able to record this fact becuase I am already up, dressed and ready. Sadly, not for ready painting duties... Today is the first day of my daughter's new swimming schedule at her local swimming club, which means that I'm required to get up at just before 5am and take her to the pool, then wait around with other similarly bleary-eyed parents for an hour or so. Hertfordshire, England at 5am is as bleak as just about any other place at 5am - at least in my book.


Anyway... on to happier thoughts. When I eventually get to my painting table tonight, I'll know that I'm joining a great many friends in the Painting Challenge for three months of fun and mayhem as we each strive to reach our personal painting targets. So this seems like a great time to say "good luck" and "bonne chance" to everyone taking part, and indeed everyone who stumble across this post - and especially anyone doing so at 5am in the morning, wherever you are.

As an introduction, here's some painting I (almost, bar the final groundwork) finished in November. There's a couple of 28mm snipers from First Corps' Great war range, and a ruined battery of French 75s comprising Old Glory French casualties and Scarab guns. 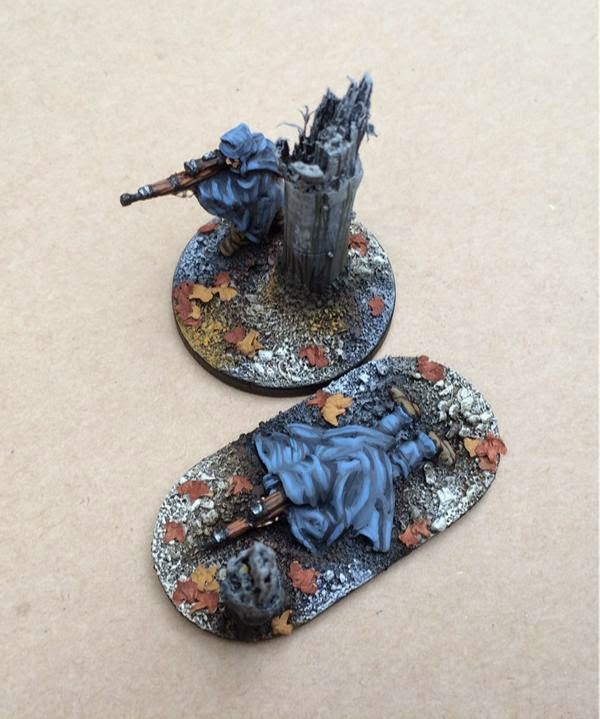 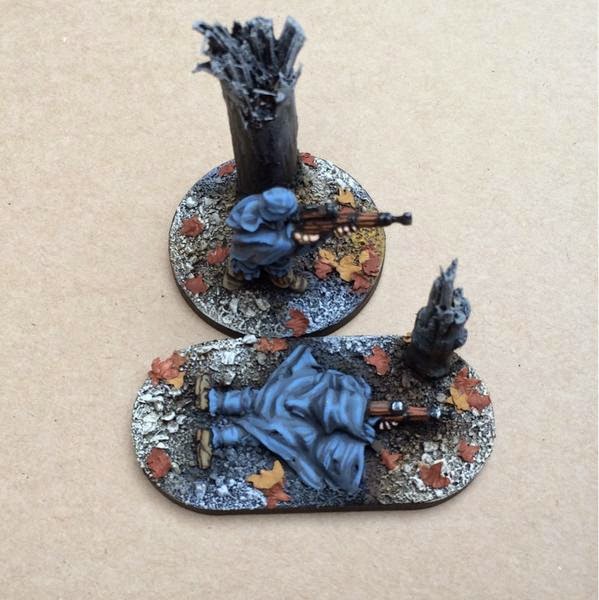 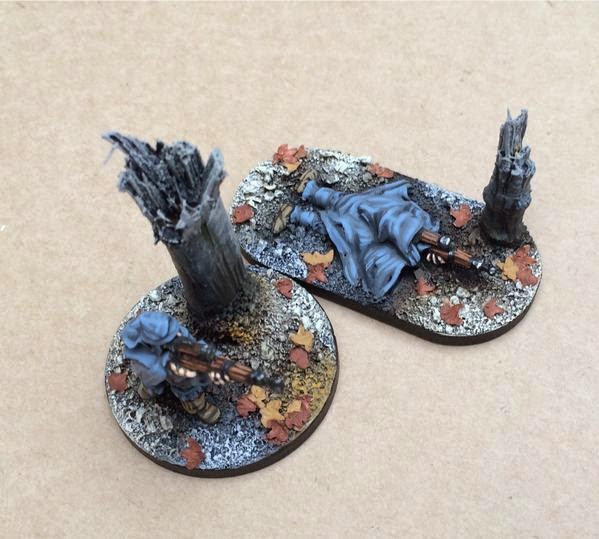 I really struggled to find information about French snipers of the Great War. There seems to be little reference to them in the English language books I have on First World War sniping, but I doubt that's the end of the story. There's also no 28mm figures which I've found of a French sniper, which is a great shame. There's a vacancy there in some figure ranges for anyone interested! 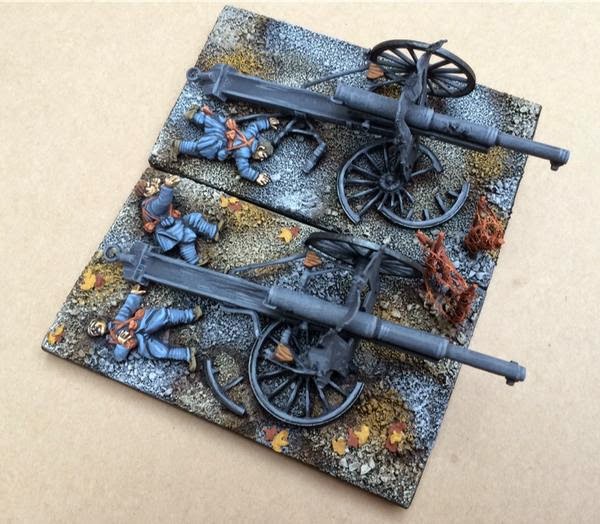 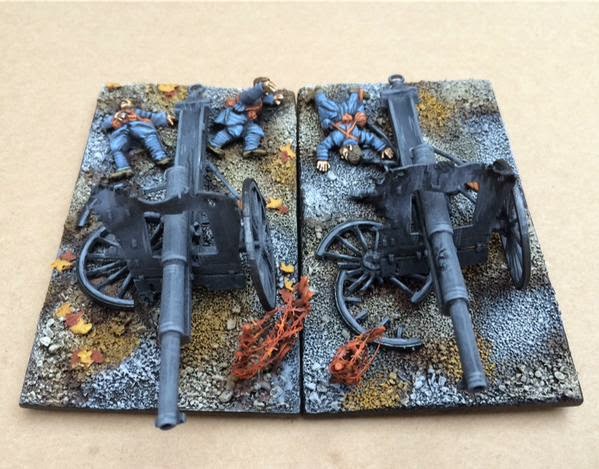 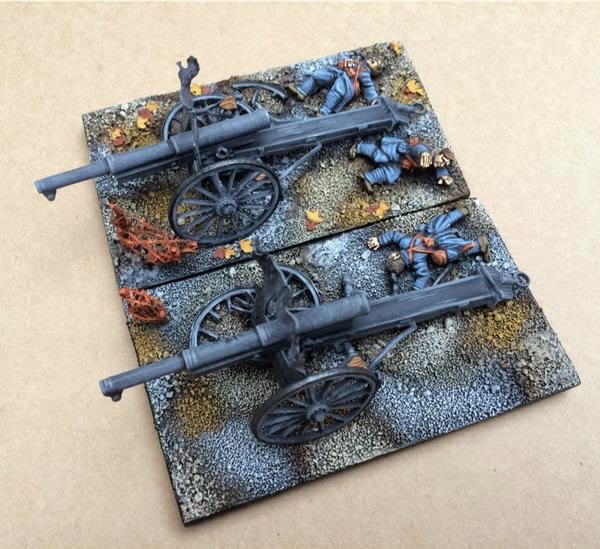 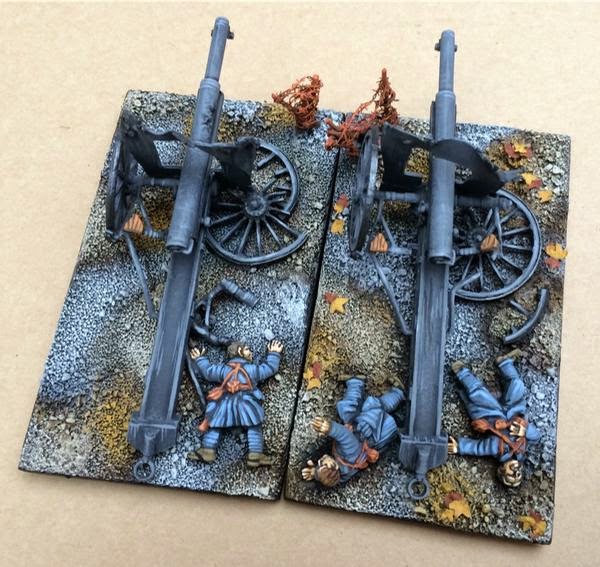 The damaged battery of 75mm field guns was something I'd thought about for a while. I've yet to finish off the groundwork, but the figures came together quite well with the artillery - although, for the purist, I am sure the figures are noticeable as infantrymen and not artillerists. It's no surprise that there seems to be no figure manufacturer making artillery casualties, so I had to make do with the terrific Old Glory French casualty models for the wounded and fallen crew. The models of the artillery guns are from Scarab, albeit damaged and broken by me. I can promise you that, intact and painted, the Scarab models do liik very nice indeed, and fit very well with the purpose designed Scarab artillery crews.

On a final note, this Saturday is Dragonmeet in London, held this year at the Ibis Hotel Earls Court & ILEC Convention Centre.

For anyone with a few hours to spare on Saturday, I can very strongly recommend Dragonmeet as a roleplaying convention which any wargamer would enjoy. The quality of traders and speakers is very high indeed, and I've enjoyed it greatly whenever I've attended. 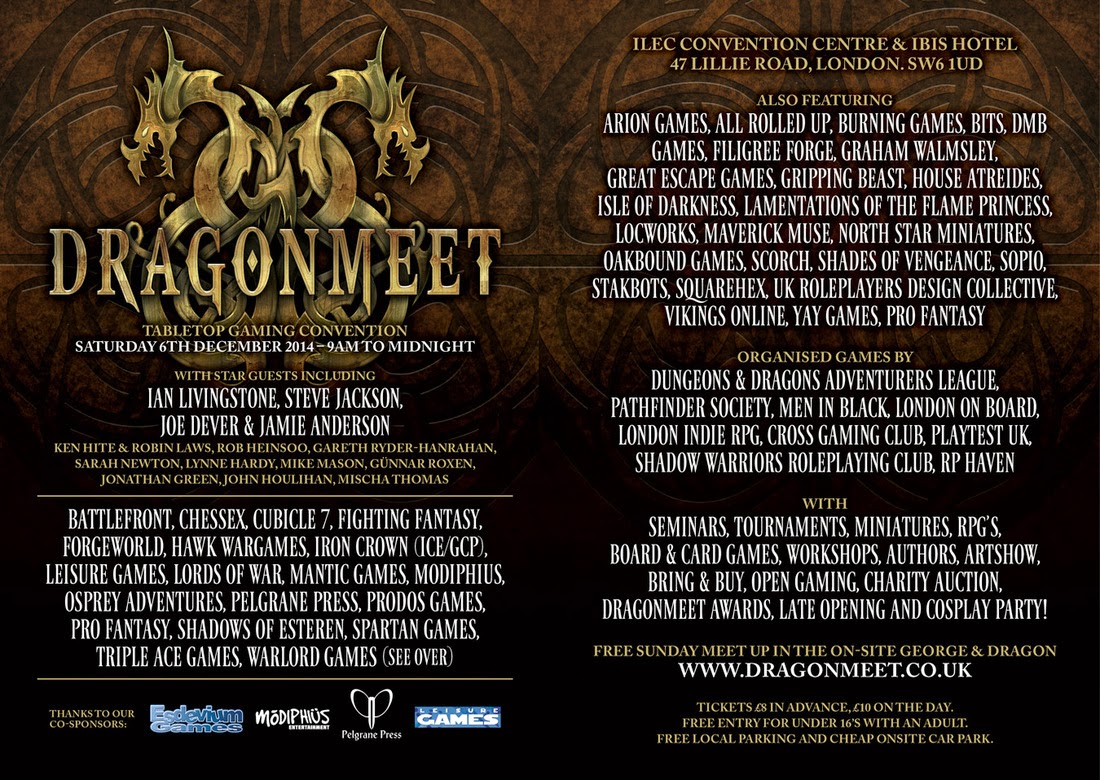 I shall be heading there in the afternon to collect my copies of Pelegrane Press' new "Dreamhounds of Paris" and "Le Livre de Fourmis", and hopefully getting them signed by their well known author (and all round gentleman) Robin D Laws. Hopefully more on the Dragonmeet show in the next blog post. 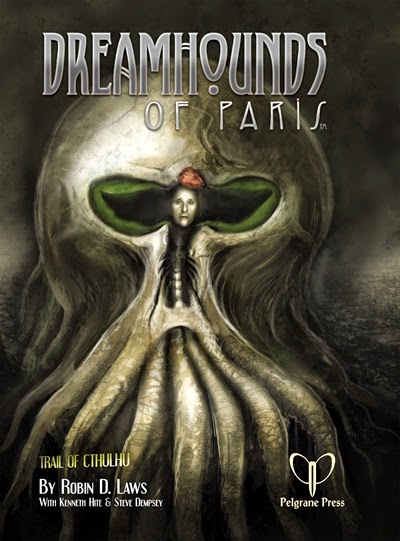 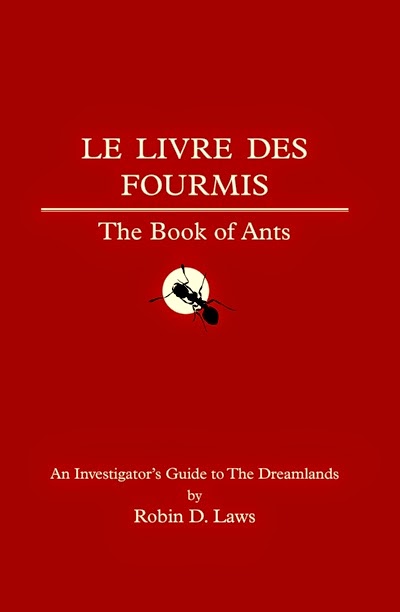 And, until next time, I need to find some coffee and recover, slowly!
Posted by Sidney Roundwood at 07:46 16 comments: