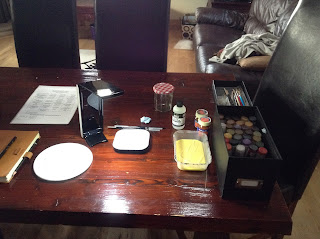 Like everyone I know in the hobby, I really struggle to maintain a consistent painting schedule. Work, family, travelling, doing stuff around the house and garden … everything seems to get neatly coordinated to prevent me sitting in front a table a picking up a paintbrush until 11pm at night. Yes, I know that you know that feeling.

One of the best things about holidays is taking a paintbrush and some paints and figures. Tricky, but not impossible, if flying, but certainly possible if you’re heading anywhere by car. Part of the trick is getting prepared in advance.

I picked up a sturdy deep box from Paperchase, and kitted it out with an off-cut of blue Styrofoam to hold the Vallejo paints downwards with. I blu-tacked the brushes to the lid of the box and added a few other bits and pieces like a palette and brush cleaner. 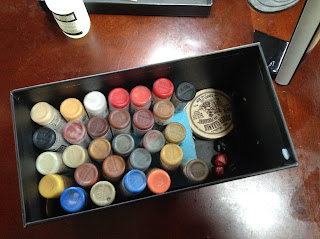 A while back I’d picked up a Foldi Daylight lamp which gives out a great daylight LED light to paint with and is powered by AA batteries (and cost about £60). OK, not cheap, but a pretty good investment if you’re painting on the go a lot. A long time back I’d also picked up a magnifying glass which you can dismantle and fold away and can be easily packed away in the painting box. 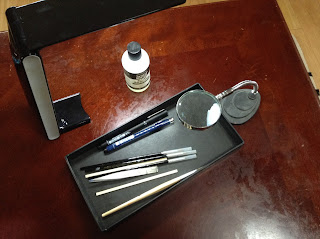 I fitted a handful of 28mm figures into a separate box – more late 17th Century militia – and I’m all set. I’ve no idea how many I’ll get through, but I’ll let you know! 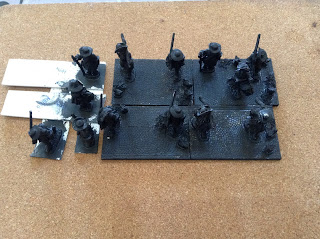 When I can’t manage to carry paints – such as on an overnight business trip – I try and carry a notebook, some pens and pencils. I’ve loved making and drawing maps for years. Some of them historical, some not. I like dreaming up scenarios, battles and campaigns – some of them even get played! Just as with a blog, I write down the games we’ve played, the ideas that come to you at odd times of the day, and the plans that just about every wargamer enjoys making. Notebooks are a great way to stay in touch with the hobby, even if you have zero time.

Just five minutes colouring in a map takes you to a 17th Century Italian valley, the Free City of Bravos, the Acheron IV meteor cluster – or wherever, or whatever, you enjoy. 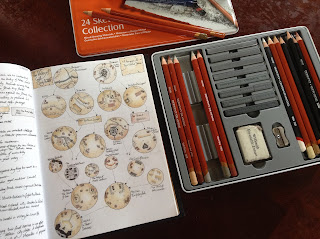 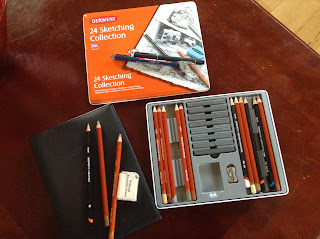 They’re fun to look back through. Not as polished as a computerised map. A lot less printable. But a lot more personal. 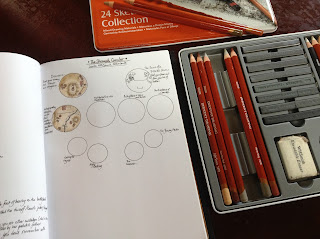 
I’ve briefly covered painting 2mm figures in a previous blog post. Although I don’t want to go over old ground, I thought it was worthwhile giving a couple of additional thoughts now that I’ve finished both the Imperial and the Swedish 2mm armies for the Lützen game three weeks back, and have now started on a smaller pair of French and Spanish armies for the 1630s Italian campaign around Mantua (more of that in a later blog post).

I’ve set out these thoughts in seven handy sections, below:

(1) 2mm painting is MASS painting
In painting both the Imperial and Swedish armies for the Lützen game, I approached the project en masse. I cleaned the figures together. I based them in one setting. I undercoated each army in a single setting. I base-coated and painted the groundwork in one go. Here are some images, this time from my 2mm Swedish army, of doing things an “army-level”. 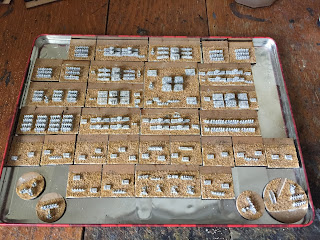 Put simply, doing each stage in one go made me “feel” I was getting somewhere. I might be only painting 50 bases, but (I would think), “that’s the Imperial army based”, or the Swedish Army’s groundwork “done”.

Of course, this manner of thinking is a bit of a cheat – it’s no more laudable to do a whole army than a single figure. But , after years of building 25mm/28mm forces, it was a good feeling to be painting a whole army and visibly getting somewhere.

With 2mm figures, you have to do more than just paint the figures. A beautiful paint job isn’t really possible. The figures are too small for that. You need to be thinking of a collection of units, and of those units existing in a world they inhabit. You’re trying to bring that army to life, and recreate the army in the field.

That’s why I think it is worth bothering with standards and flags and pennants. 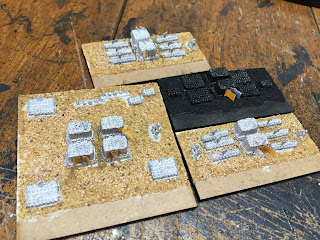 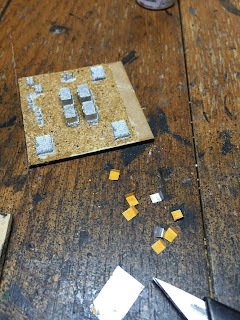 And that’s why it’s worth spending time on the figure bases.

(3) 2mm basing – a neutral frame
You’re going to have to exaggerate colour in the 2mm figure and figure blocks. Your bases can help with this. I’m not talking about having a flat, empty base without groundwork. Far from it. The approach I took was to try for as neutral as possible a basing technique. This would frame the figures on a neutral coloured base, with minimal scatter. 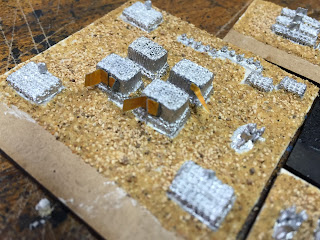 With this in mind, I PVA-glued the figures to 2mm depth MDF bases from Warbases in the UK. I then created a mixture of 50% polyfilla and 50% PVA in a porridge like mix and painted than on the bases to give a little texture to each base and conceal the metal bases of the figure blocks. I think the addition of Polyfilla helps “set” the figure blocks on the base better – they look like they are part of the base, not just standing on it. I added fine gravel and sand before PVA/Polyfilla mixture was dry. The gravel just gives enough texture to create an irregular surface, and help dry brushing.

I also added some foliage on the bases for the baggage trains, t try and create the impression that the Provost-Marshal has halted the waggons by the shade of a well-placed copse.  Woods and trees are easy enough to recreate in 2mm, simply being the addition of clump foliage, "painted" with white PVA for strength.  The white PVA dries completely clear, leaving the foliage rigid and perfect for dry-brushing. 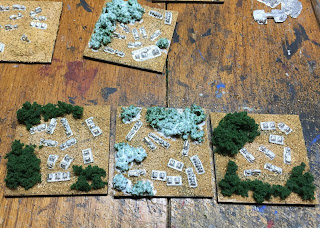 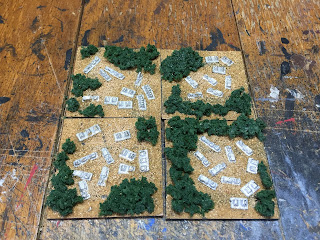 I undercoated all of the figures and the bases with black Humbrol enamel. Drying time was speeded up by placing the figure bases on a tin tray in the cupboard where our hot water tank lives – something we call the “airing cupboard in the UK.

I then painted each base with a base colour of Vallejo Neutral Grey, and then dry brushed progressively through a light grey and near white. (I tried experimenting with a tiny amount of French Mirage Blue in the Neutral Grey, but it didn’t look right). I felt that the monochrome, neutral palette for the figure bases worked well enough on its own. 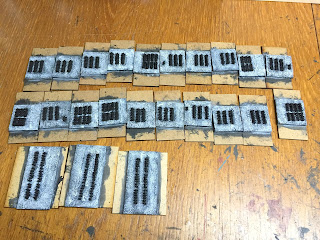 The next stage was to base-coat paint all of the figures in Vallejo Black. Why on earth would I do that? Didn’t I just undercoat the figures in black enamel? Correct, but the undercoat is just a “key” for the paint – and the Vallejo Matt Black base-coat is (for me) an essential stage in getting the later painting “right” . Give it a try, perhaps, on a few figures if not a whole army. 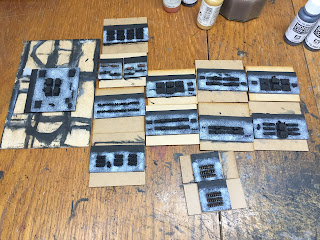 Then you’ve arrived at the figure painting itself. This part is quite fun, and surprised me how much I could get done. I did find a good magnifying glass invaluable (I’ve blogged about it HERE), and I had lots of good light – natural and artificial. Once you have those, you need a reasonably steady hand and a small brush. I used a size “1” for the figure block horses, bodies and hats, and I used a size “0” for the figure block faces, highlights, pikes and standards.

Most of the horses were painted using two colours – a base colour and a highlight. I also used that same combination – base colour and highlight – for the individual soldiers in the figure blocks for their torso/trousers, hats, metallics and standards. 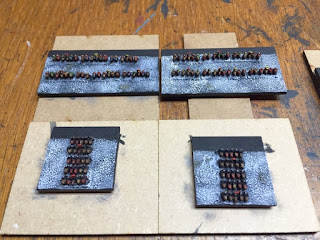 You might think that using two shades of paint for 2mm blocks is excessive. I think that’s a fair comment, but looking at the figures, I did feel that the blocks looked more animated and vivid when there was a greater variety of paint colours on each block. As ever, I used Pieter Snayers’ paintings as a guide. Have a look at his incredible painting of the Siege of Preswitz – his cavalry blocks are a mixture of complementary colours, and the painting is not flat and slab like. They’re impressionistic, giving a feel of movement and variety. That was what I was trying to aim for. 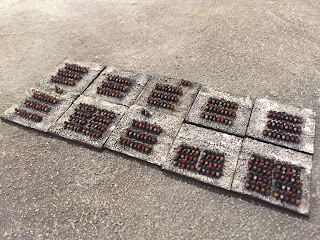 I probably spent more time on horses than riders, as a general rule. The Irregular horses are one of the strengths of 2mm sculpts – well moulded and easy to paint. I also tried to vary the Imperial coat colours in a variety of natural tones (browns, beige/ buff, dark reds) to a greater extent than the Swedish regiments. 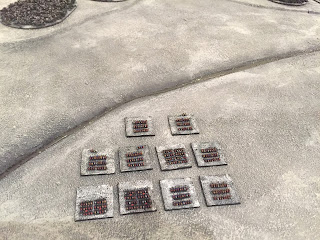 I also found the following timings useful in planning painting sessions:
Hopefully, from this list of timings, you can see that you can start to amass attractive armies in a short time. If, like me, you like to feel you’re getting somewhere with painting, 2mm figures are rewarding.  Just half an hour can see you finish a couple of regiments of Reiters or Horse. In a couple of hours, you could easily crank through a brigade of foot. I felt I was making progress before getting stale.

(7)  Varnish, but don’t get stressed about it

I varnished the figures with an artist’s matt varnish, but I doubt I needed too. 2mm figures are very resilient. They don’t seem to “paint-chip” or flake when playing. And they are too small to pick up – players instinctively pick up the bases. The varnish is to seal the paint and give some protection, but it does not seem as essential as with larger scale figures.

Hopefully all that helps. The next post will be on making 2mm terrain, after which, I’ll move on to rules and scenarios. Hope you can join me for those.