"The Art of Discoverie": Reconnaissance, 1688 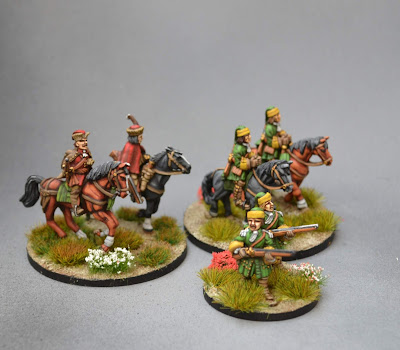 Time is such a disconcerting thing.

Although it had been fourteen years, nothing had changed to show the passage of time on the low, gloomy Flemish hills and frost-crackled downlands encircling the territories of the free Flemish city of Laarden.  The smell of the earth was the same - rich, cloying, infused with damp. The sky was still pewter grey - had the sun even visited here once in the last decade?  And the wind, buffeting from the north and the German Ocean, flayed at my face just like it had done, fourteen years ago.

They had nearly killed me here, back in 1674, near to the village of Sint Vaalben. On a Flemish hillside just like this, only wreathed in smoke and the sound of wounded and dying horses and men all around me. Under a Flanders sky, like this one.

I spurred my horse gently to the top of the downland, to a long ridge crest which gave a fine view of a cold, winter landscape of thick woods, more open copses, folds in the ground, ploughed fields, small villages and – in the distance – the spires of Laarden itself.  The downland crest was occupied by a single rider, watching the same view from his horse silhouetted against the sky. 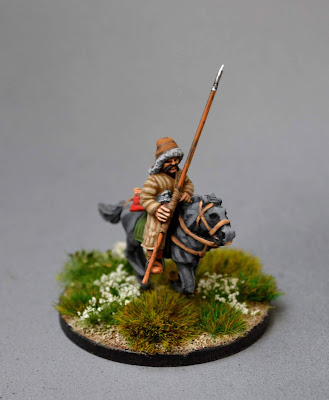 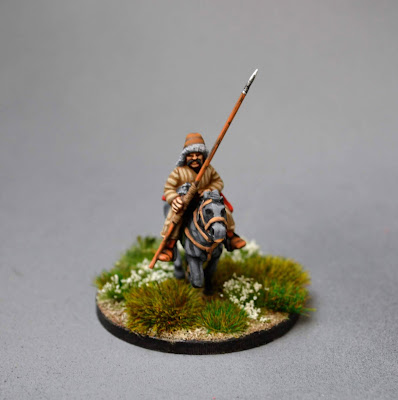 He was stationary, not even looking in my direction. His horse was squat, short legged, little more than a child’s pony, with tack and bridle made from rope. He was dressed in a coat the colour of dead leaves and a cap of filthy sheepskin. I turned, confused and bewildered to the sergeant of the Dragoons de Fimarcon riding beside me on the hillside. “No, really?”, I asked, wondering if this was a joke.

The sergeant, looked at me with eyes as black as the wine of Cahors, shrugged and spat on the frozen earth. “Von Kroneberg does things differently”, the dragoon replied. “But.... my Lord, he’s good, and fast. And he knows how to find the Enemy.” Another shrug from the sergeant, a pause, and a knowing look. 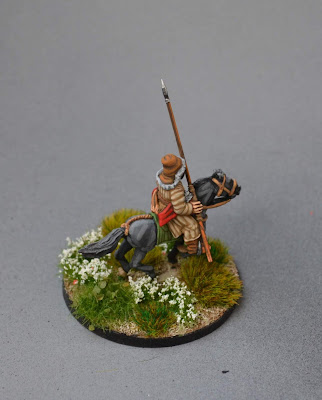 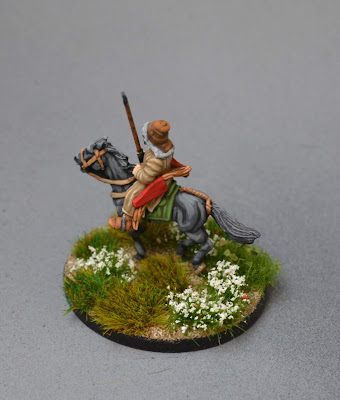 I grunted and spurred forward to the horseman who was still sky-lined on the crest of the hill.  Somehow, I could tell the rider knew I was there. Once I was twenty paces from the rider, both he and his horse turned perfectly to face me, in a movement more fluid than oils moving on the surface of water. No one rides like that who wasn’t born in the saddle.

I saluted the man slowly, and he tipped his lance. “Von Kroneberg....?”, I asked, waiting for a reply. His eyes never left mine as he reined in his horse and cantered from the downland, watching me through the descent. 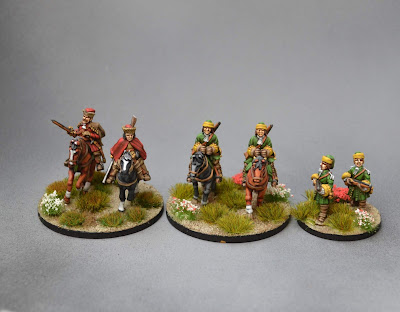 Baron Hans von Kroneberg had many names, and even more titles, and all of these were dwarfed by his soubriquets.  Hans von Kroneberg was the name he had finally settled upon. But in the battlefields of Germany, Hungary and Poland, few commanders were overly concerned with the accuracy of a captain’s name, provided he brought his promised troops to the field at the allotted time - and providing, of course, they fought well. And for all his wretched lies, falsehoods, immoralities and arrogance, Baron Hans von Kroneberg and his hussars, Croats, Poles, Lithuanians and other horsemen fought very well. 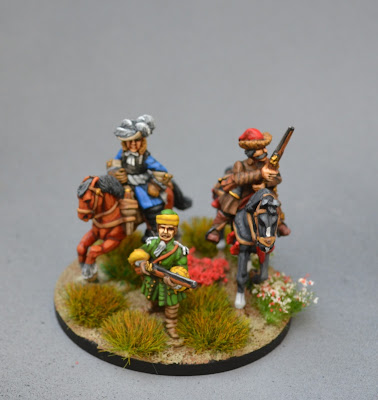 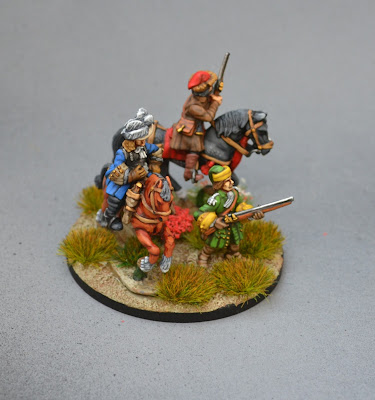 I had seen them before in Germany, paid by the Sun King to serve along the Rhine and in the Palatinate. And I had heard of them in what the Germans call the Türkenkrieg.  Of course there were the familiar stories of plundering, being absent from the line, thefts, trouble in the camps and quarters wherever they were billeted.  And, just as frequently, there was the more welcome news of Kroneberg’s horsemen riding hard, scouting effectively, and possessing an usual skill in finding and facing off against the Imperial Horse.

By the time the tartar scout had led me to von Kroneberg’s encampment, it was growing dark on a late February afternoon.  Unlike before, the Baron von Kroneberg rode out to meet me and the Fimarcon dragoons in my party.  He was, perhaps inevitably, dressed flamboyantly, and surrounded by a cloud of hussars and Croats, into which my tartar escort vanished like smoke in the cold evening breeze. 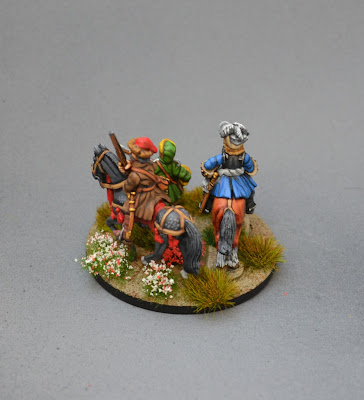 I summoned all my tact as I addressed him. “Greetings Baron, we have marched north since we last spoke and are advancing on Sint Vaalben, and Hoedveld.  We were expecting that you would have joined us earlier”.  I restrained myself, although mindful that the Duc d’Humieres and the Duc de Varennes might not be so forgiving for the faux-Baron’s tardiness.

He inclined his head, and reined in his chestnut mare, and smiled.  And then he laughed, a sound which was accompanied by some of his company of horsemen.  “Lost your way already, Marquis?  Shall we help you find the Enemy?” 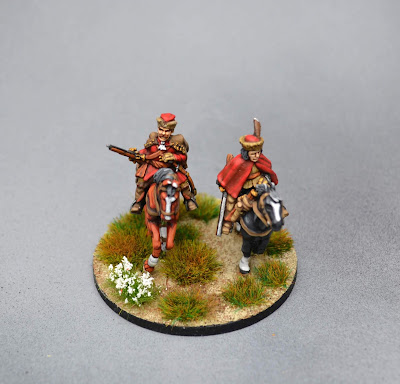 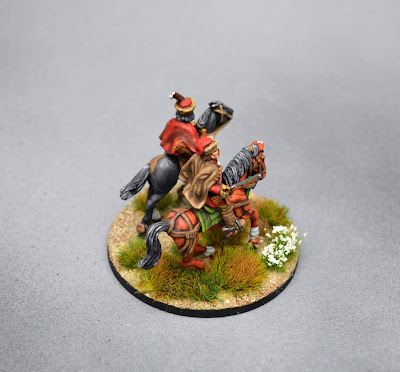 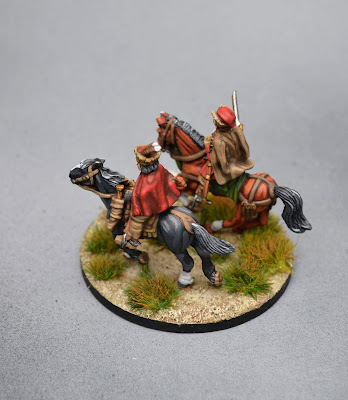 *******
It’s been a little while since I blogged this next installment in the story of the (fictional) Flemish city of Laarden’s campaigns against Louis XIV in 1688 and 1689.  Apologies for that, dear readers.  It’s been a fine, but busy, summer – which I hope you have all enjoyed.

On this blog this time are a few figures I completed earlier this year – with a French commander (the Baron von Kroneberg) being accompanied by a hussar and one of the dismounted dragoons de Fimarcon, and a small group of other hussars and dragoons.  Much to my shame, I confess that these figures started out being prepared last December for the ninth Analogue Hobbies Painting Challenge, for the themed rounds of “Reconnaissance” and “Mercenary”.  Better late than never, I’m sure. 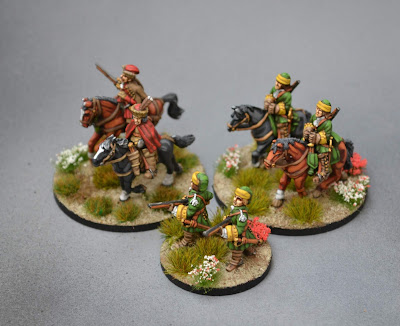 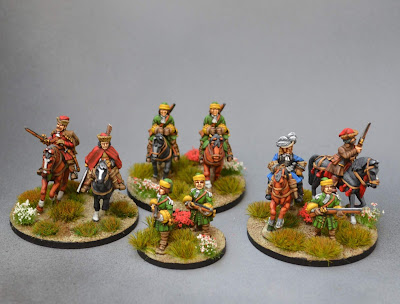 For those wondering – yes, the Baron von Kroneberg was a real French commander of hussars.  From being the talk of the Versailles salons, the Baron was dismissed from service in 1692, apparently for conduct unbecoming a senior officer in the Sun King’s army.  I came across a number of mentions of him having a shadowy past – and, with a little literary largesse, I’m sure he can become a mercurial commander in the field, or an interesting figure in a campaign.  The Baron is a Dixon Miniatures cavalry commander, mounted on a Wargames Foundry horse, accompanied by a Dixons dismounted dragoon, and a TAG Lithuanian Tartar – all in 28mm. 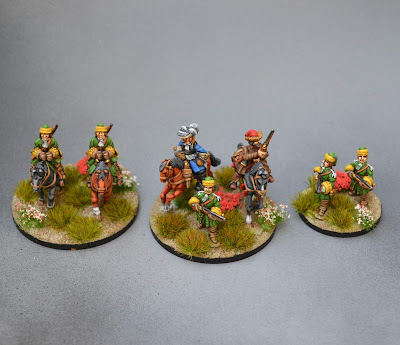 The tartar is another refugee from the “Reconnaissance” themed round in last winter’s Challenge.  He is, of course, pure alt-historical fantasy.  I can’t rule out the odd one or two tartars making their way into the French army in the Thirty Years War, the Fronde or the wars of Gloire under Louis XIV – most probably as a member of a company of “Croat” horse.  However, if this happened, he would be a unique, and colourful, addition – which is why I only painted one.  Apologies in advance to my many historical purist friends!

More to come from Laarden soon, with the arrival of the French foot as the march on Laarden gathers pace.  Hope to catch you all next time. 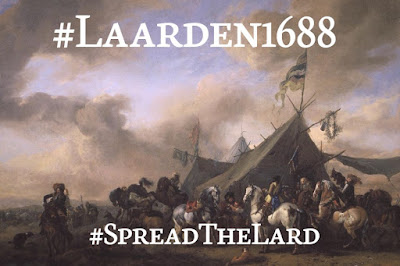