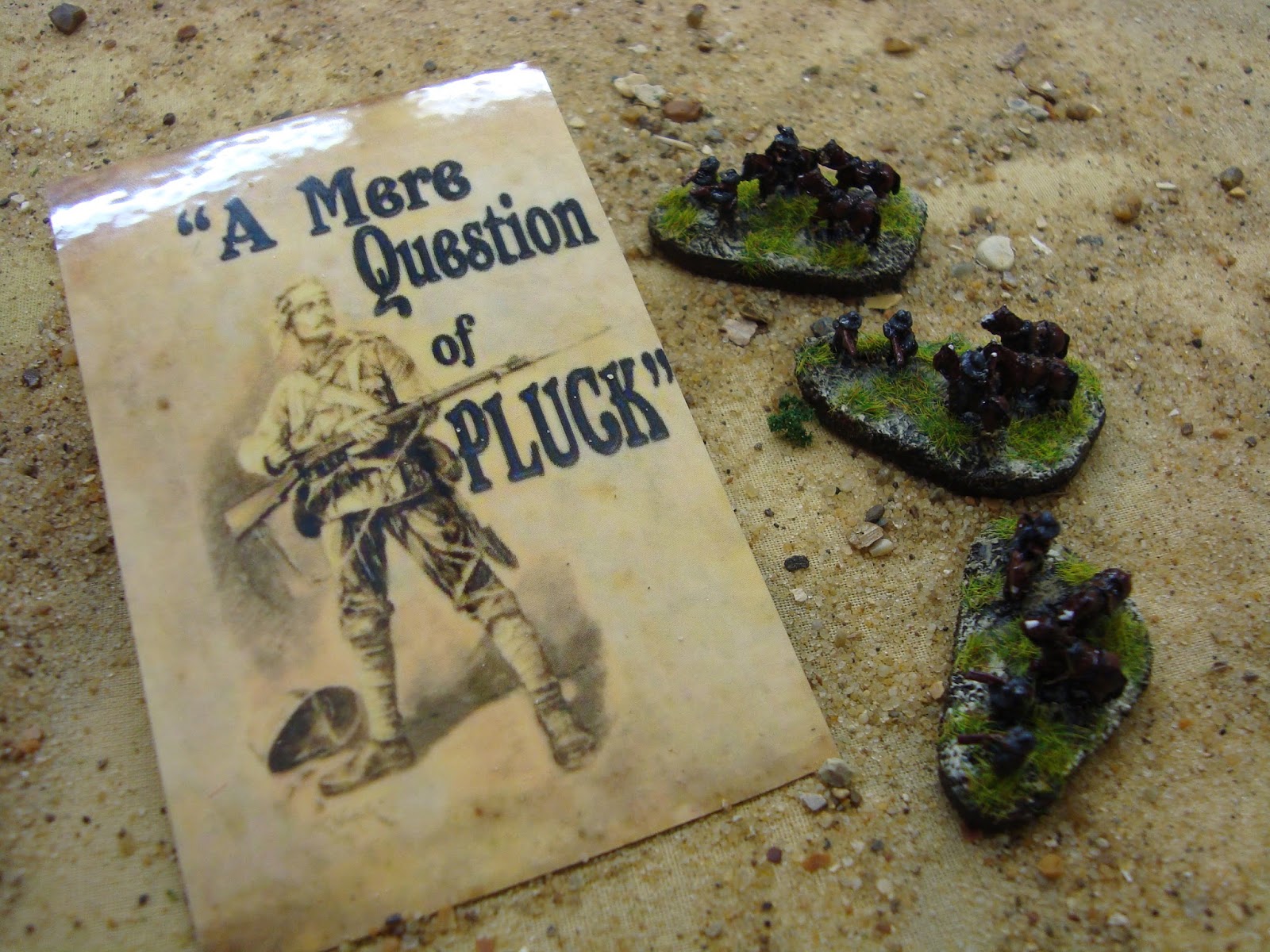 Over the past few weeks, the St Albans club has been returning to the Second Boer War. For various reasons (family illness, work), I’ve missed the first couple of games, but I returned last night for the British assault on Impati Hill, north of Dundee in Natal province. 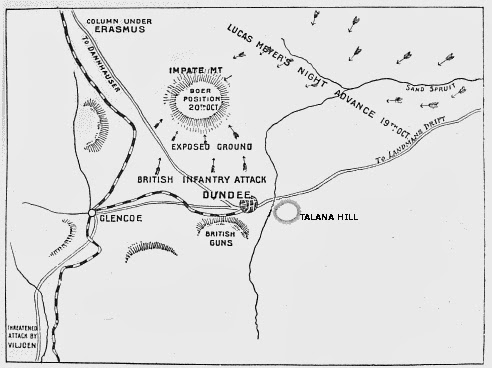 The scale used was the same as in previous games (6mm figures, courtesy of Baccus 6mm, scratch assembled terrain and a ground scale of (approximately) 1 inch to 50 yards). The rules – “A Mere Question of Pluck” were Rich’s own, and are bound to change as play-testing goes forward.

The actual battle was a very close run encounter, and the wargamed recreation stayed true to form. The result, after two and a half tense hours of play, was a marginal British tactical victory, won mainly by the ability of the British infantry to press on regardless of early casualties.

In one of those historical echoes (for which our games of the Second Boer War seem to be full of), the command of Sir William Penn Symons went strangely absent for long periods of the game. This wasn’t the result of a mortal stomach wound inflicted on his command figure (as historically), but owing to the vagaries of the card deck refusing to bring out his command card. At times like this, improvisation is the British watchword, and the infantry advance ground forward remorselessly, but at a initially glacial pace. 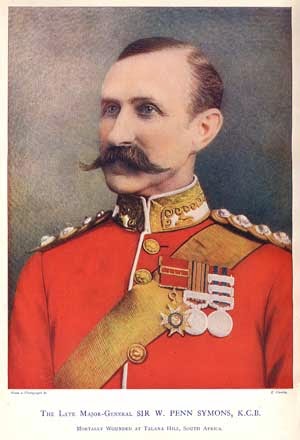 Instead of listing the events on this page, I have added a commentary to the photos. Let me know if you prefer this to a written narrative. 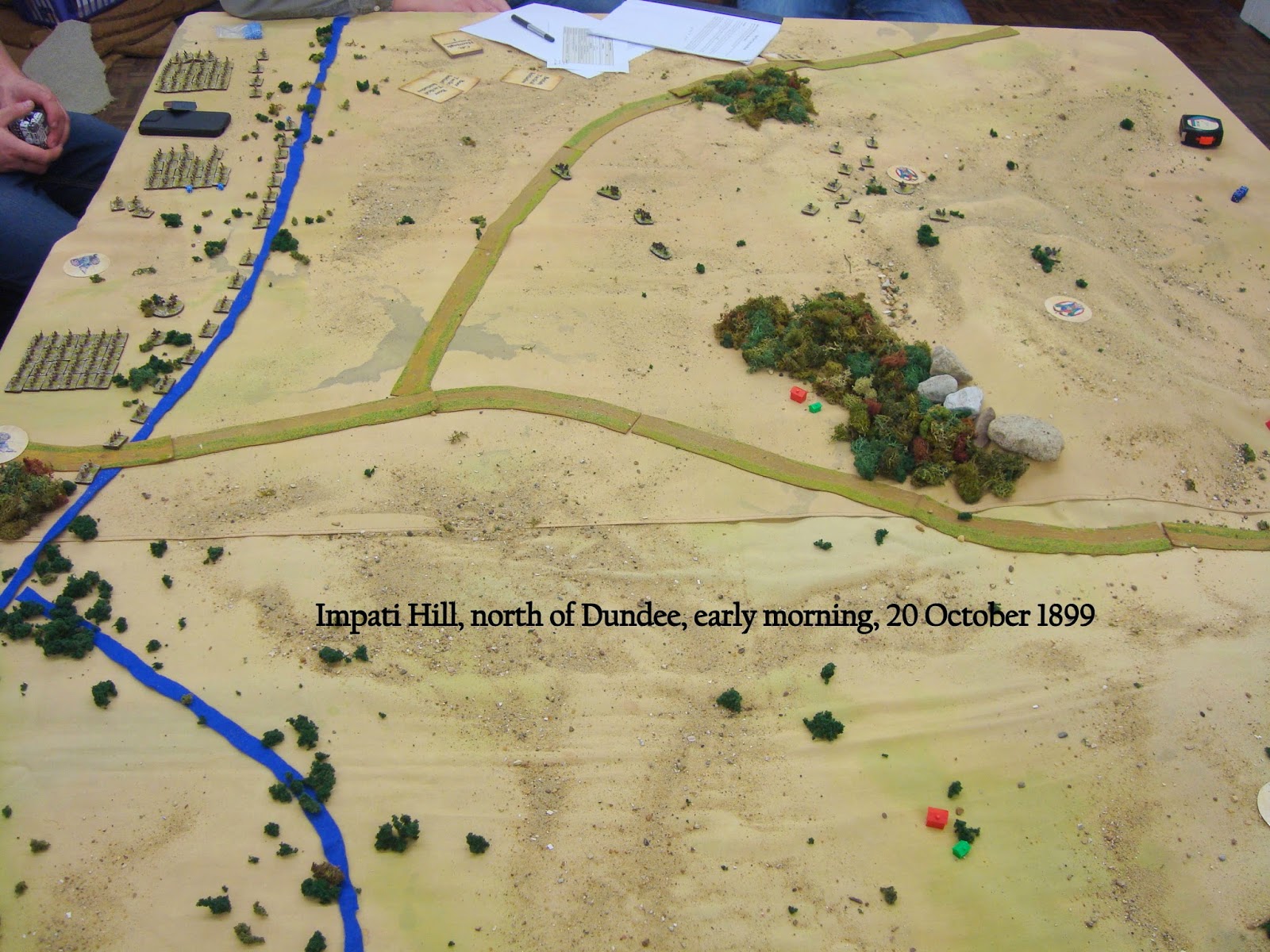 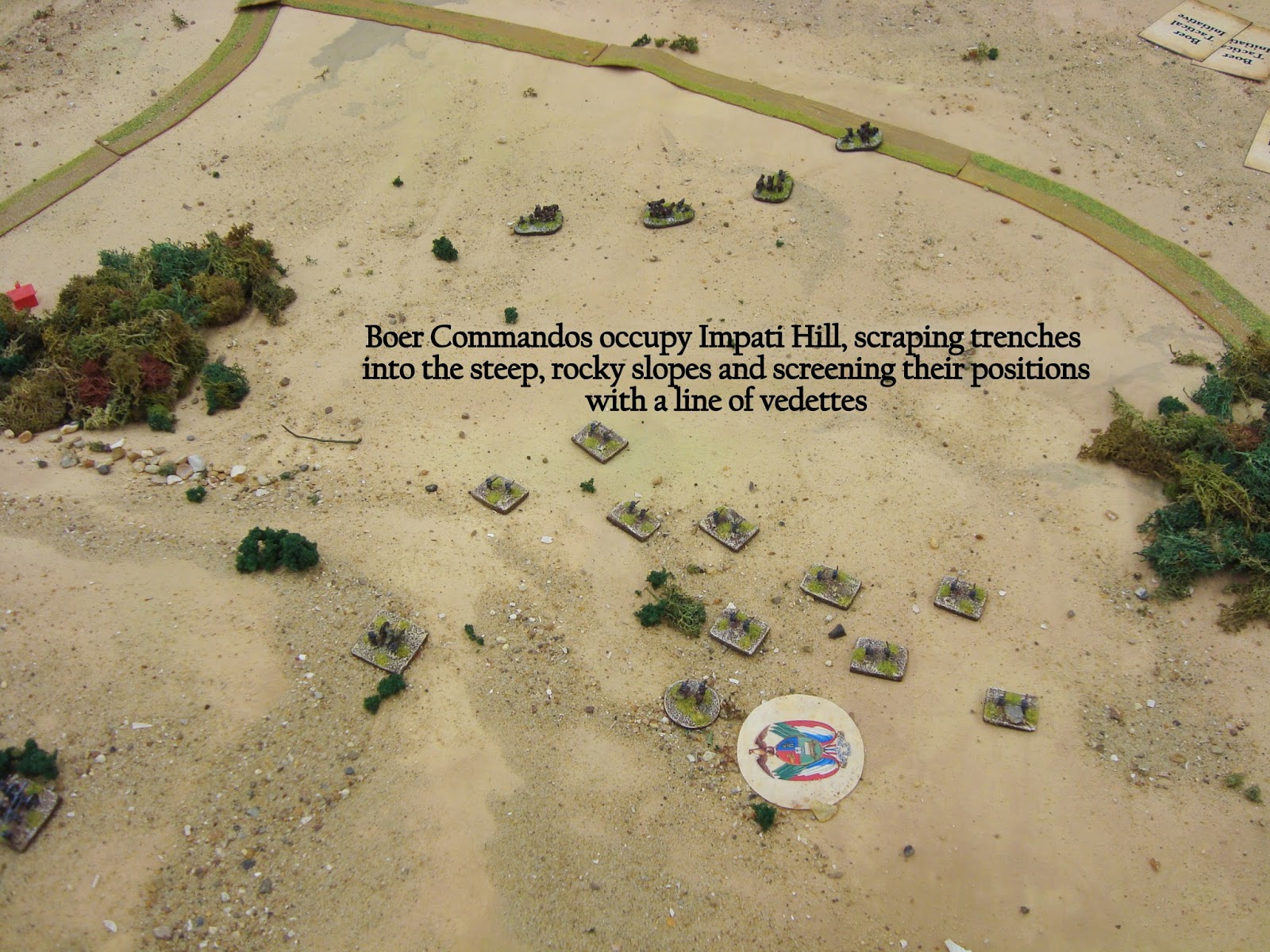 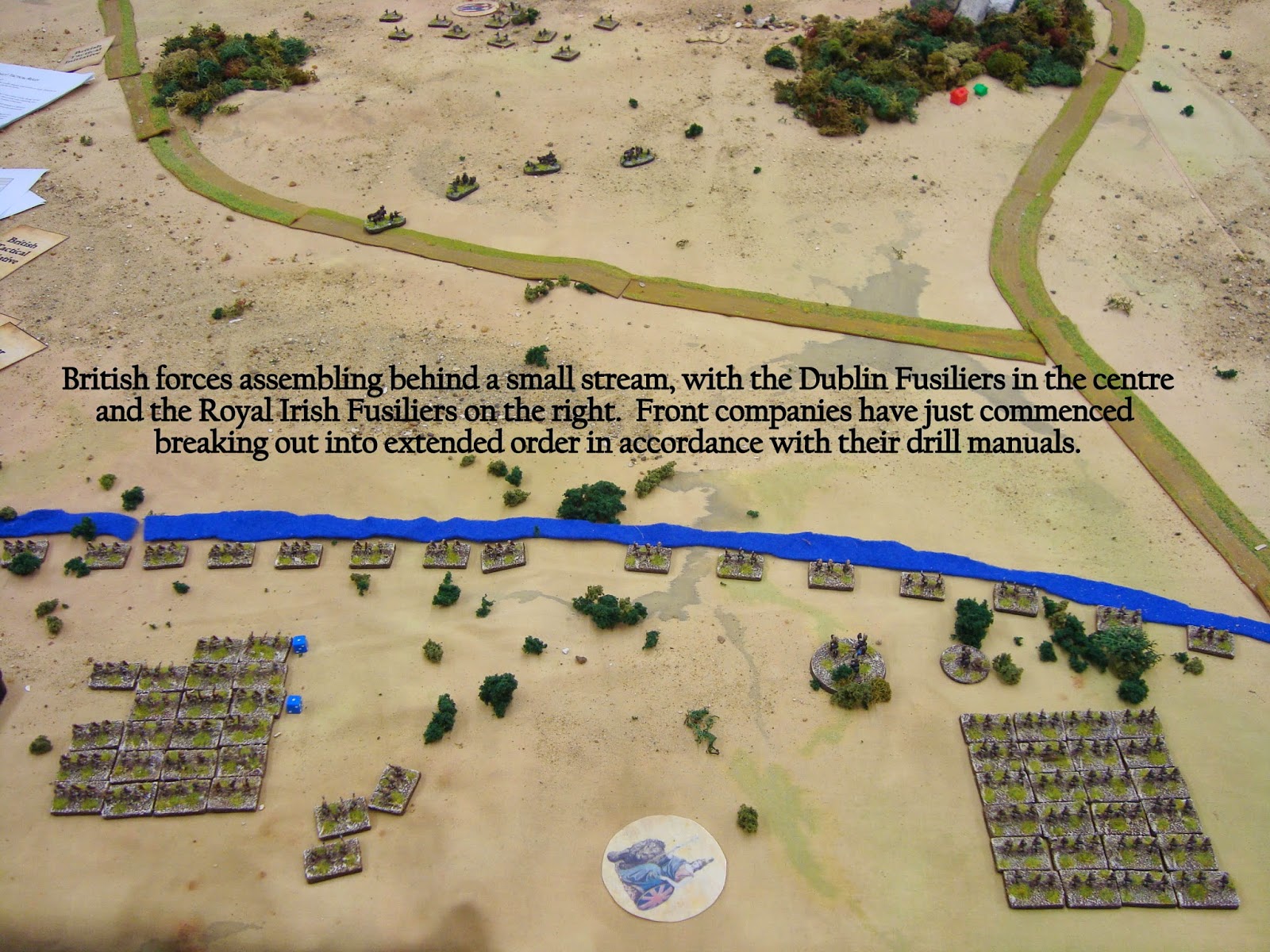 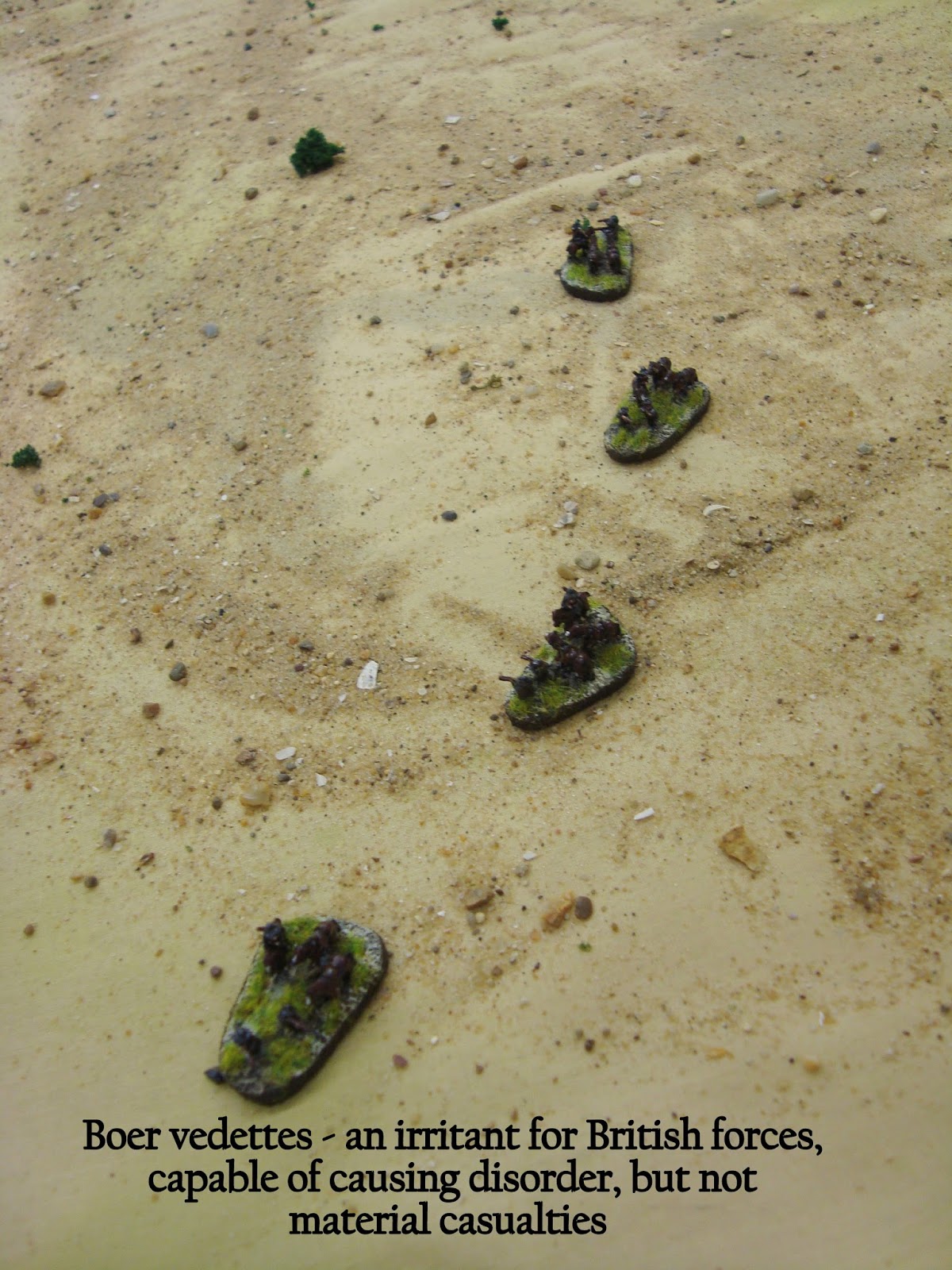 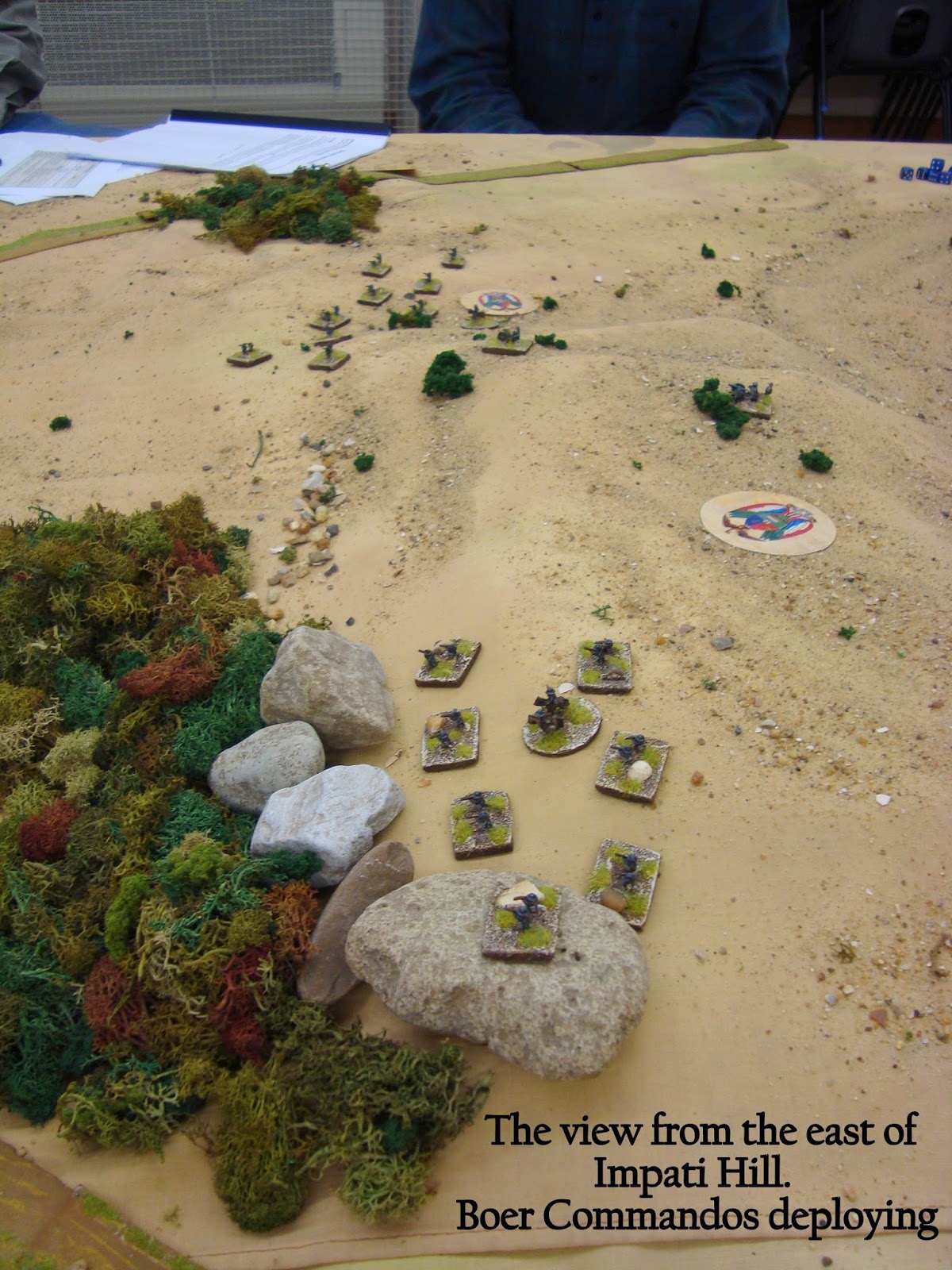 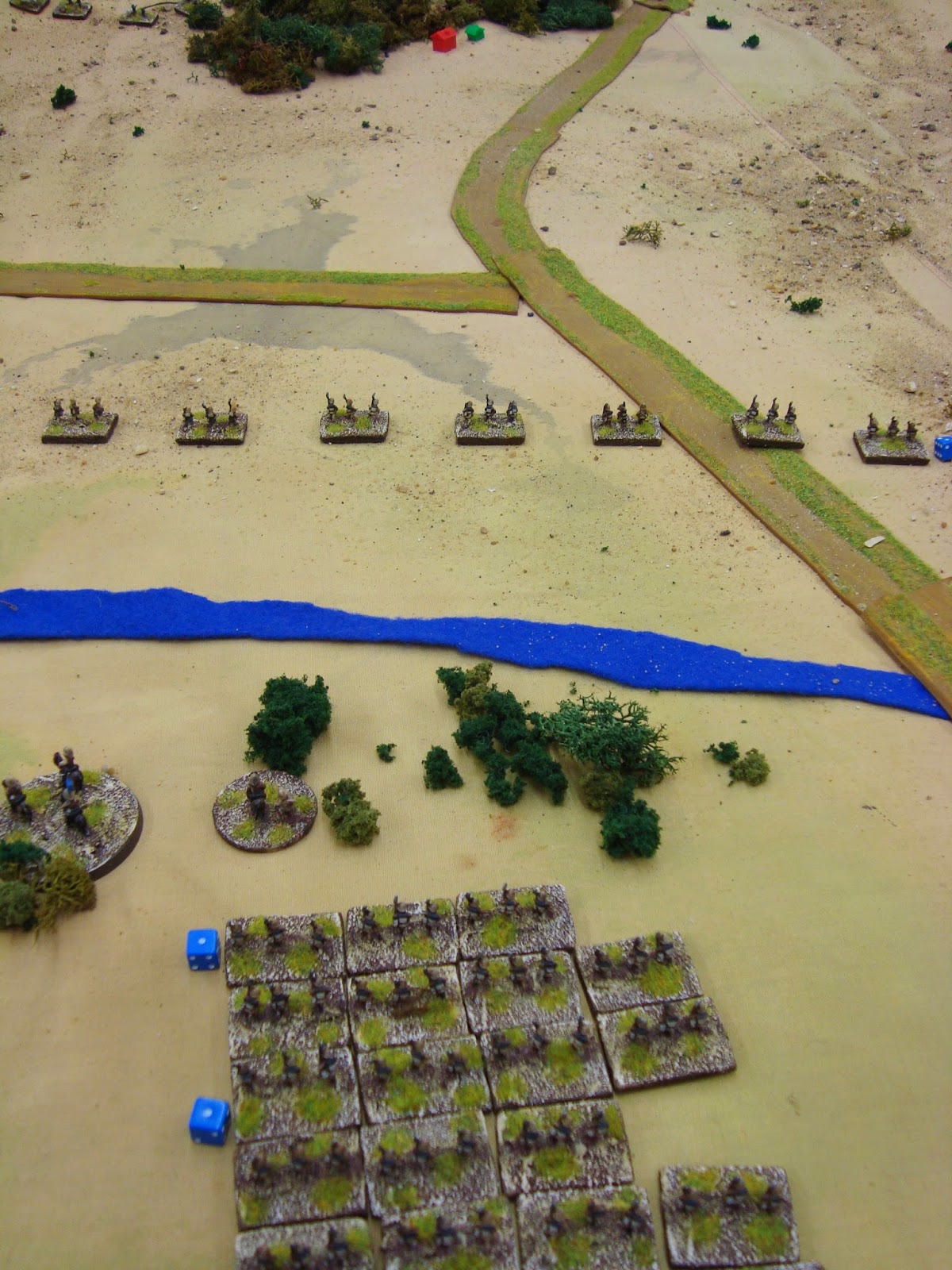 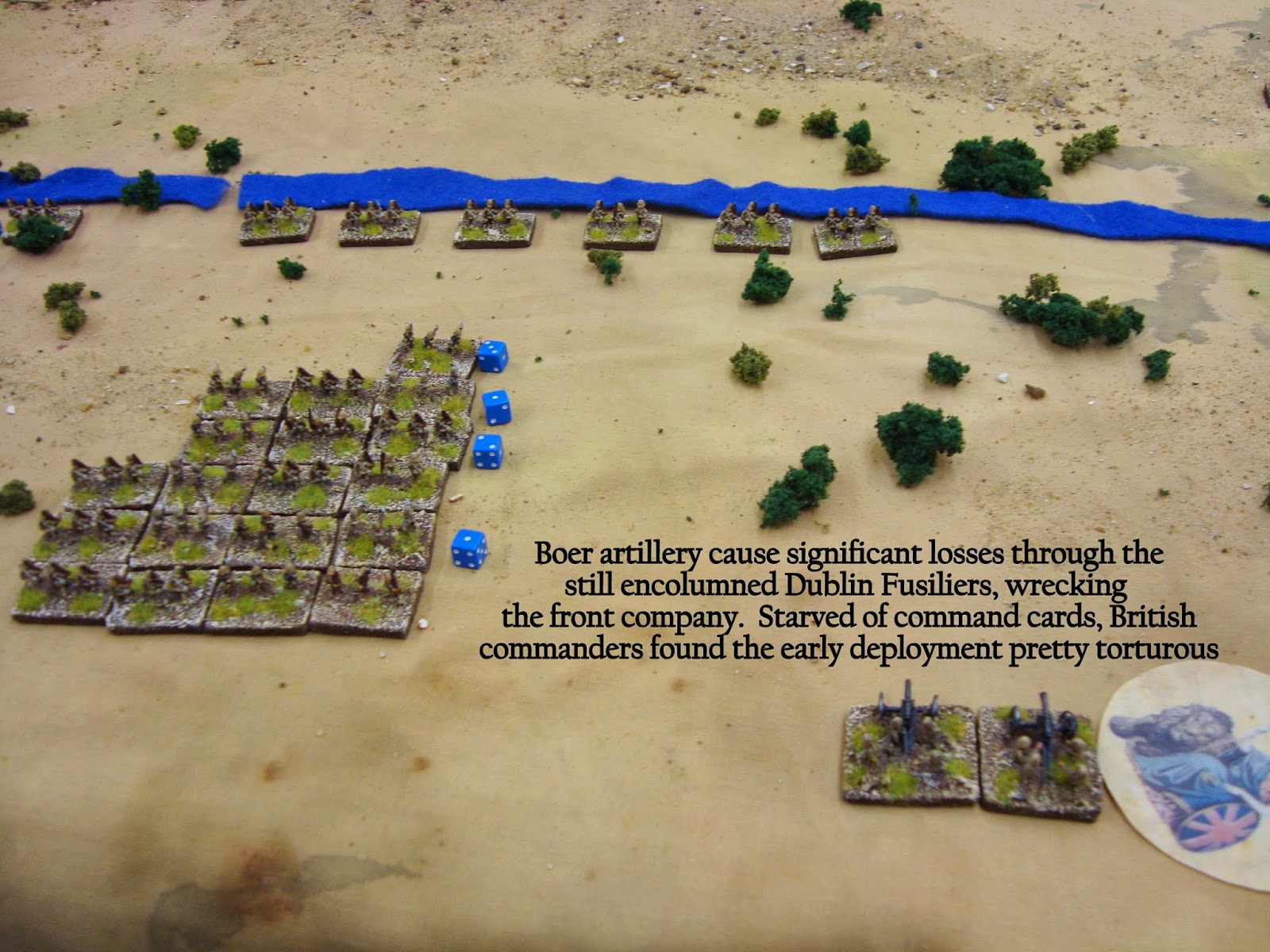 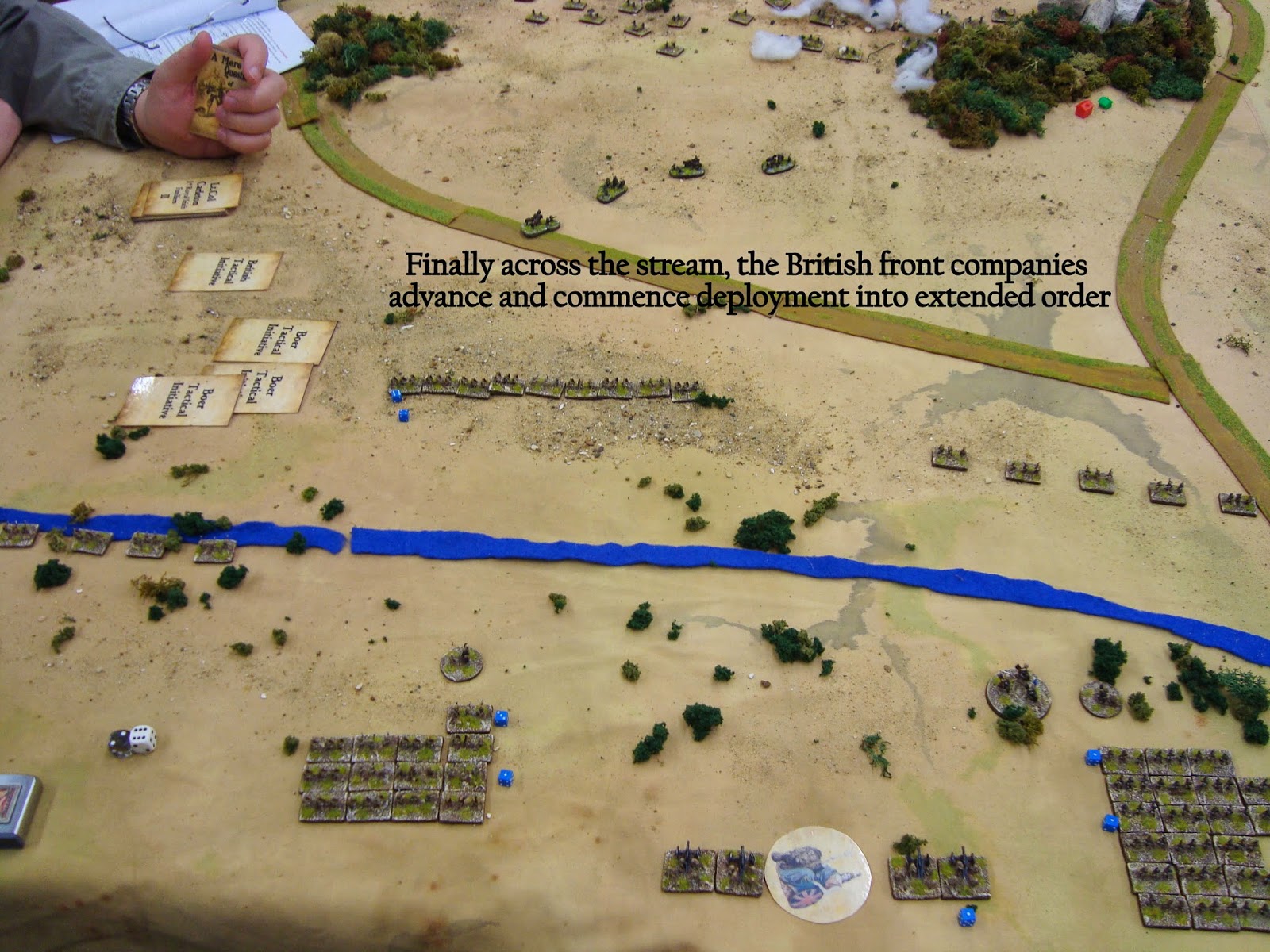 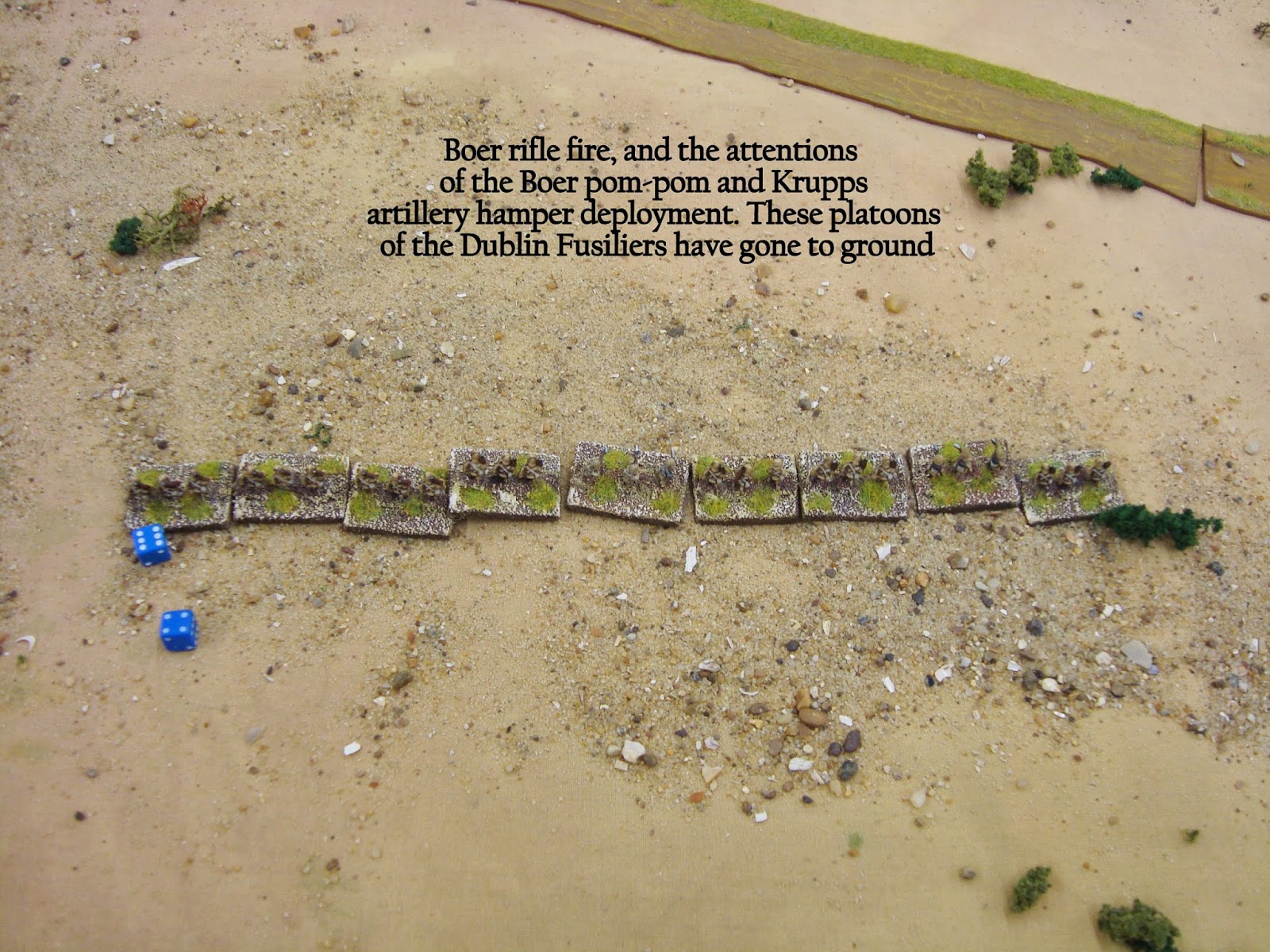 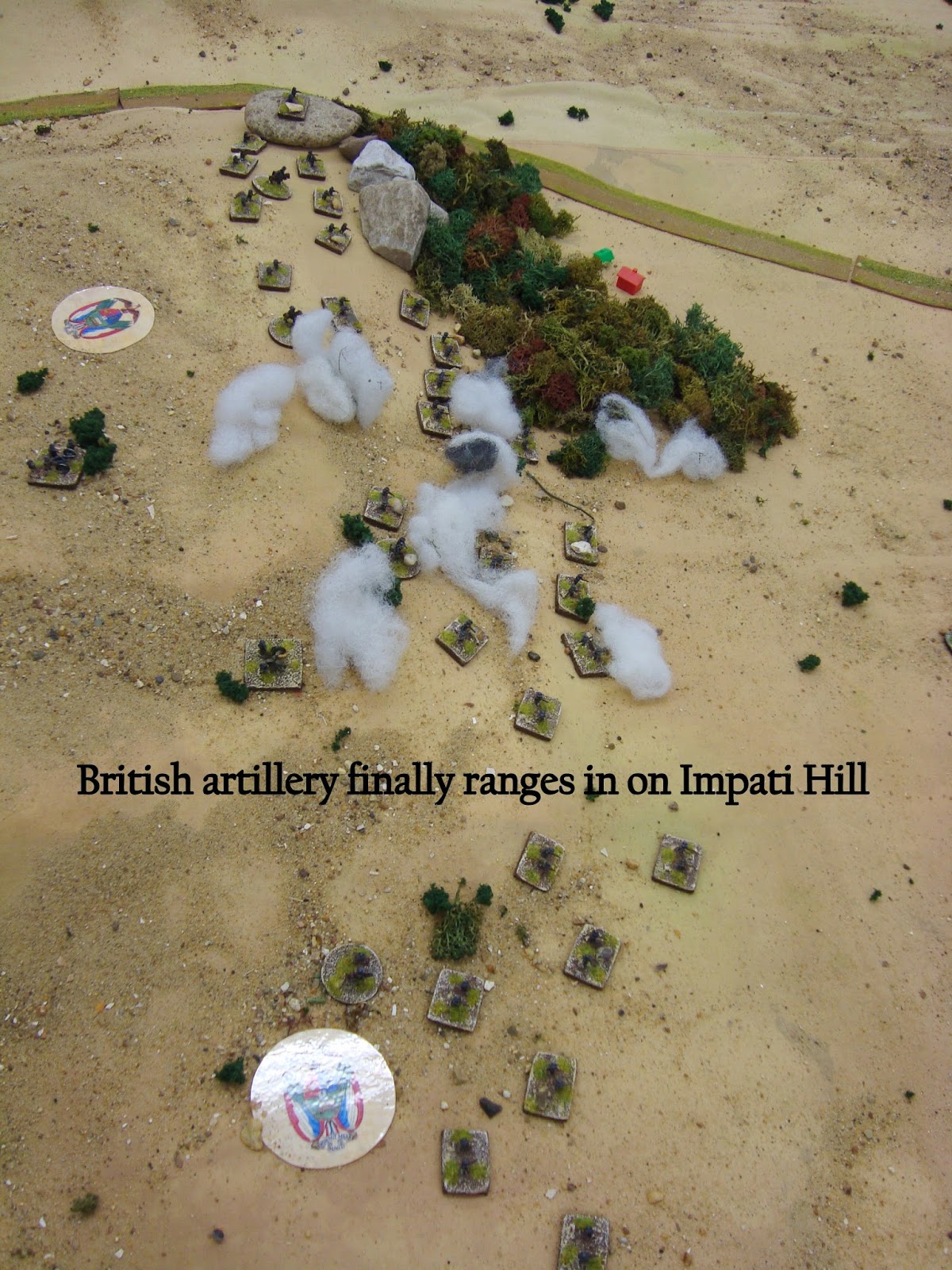 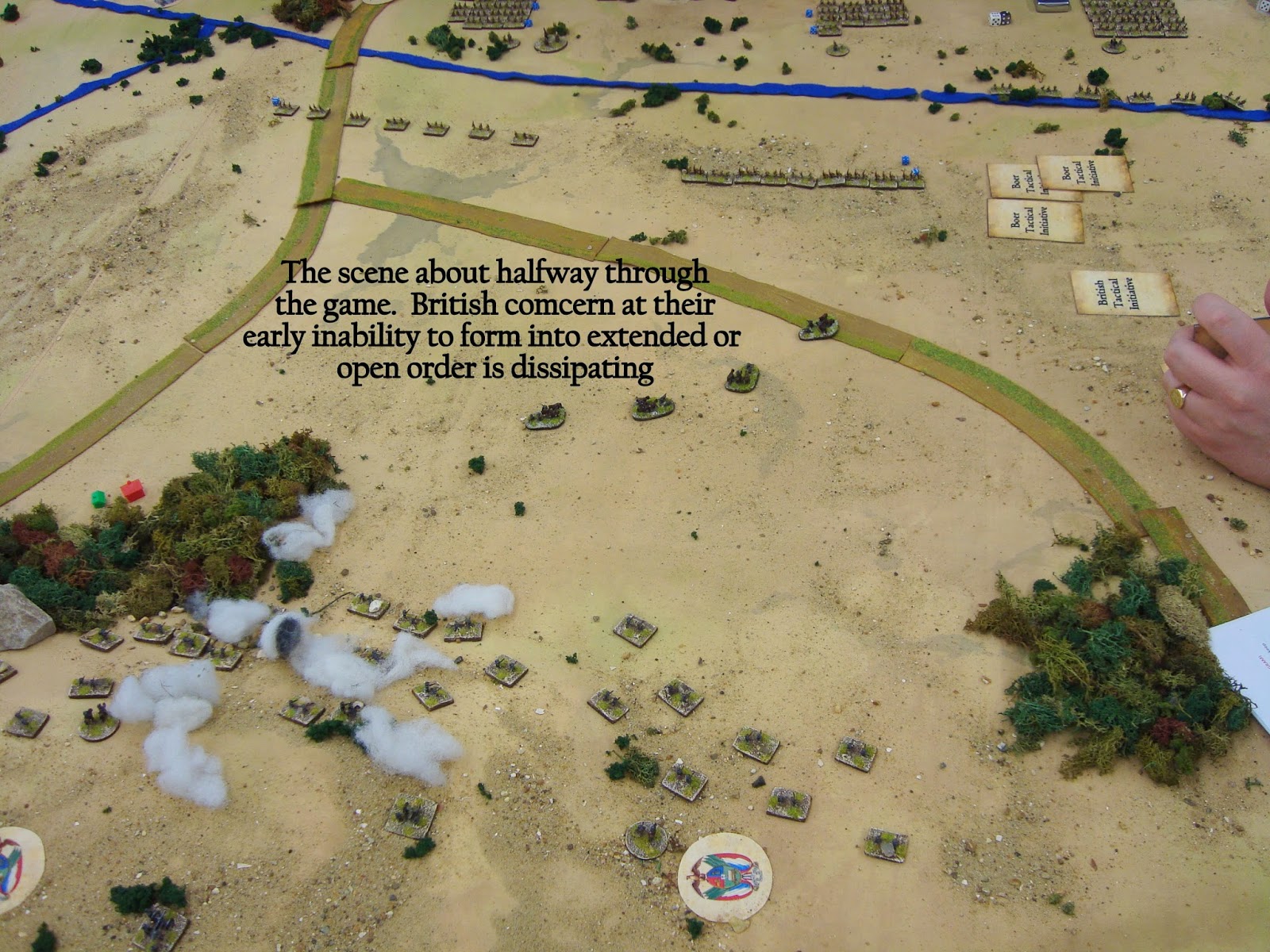 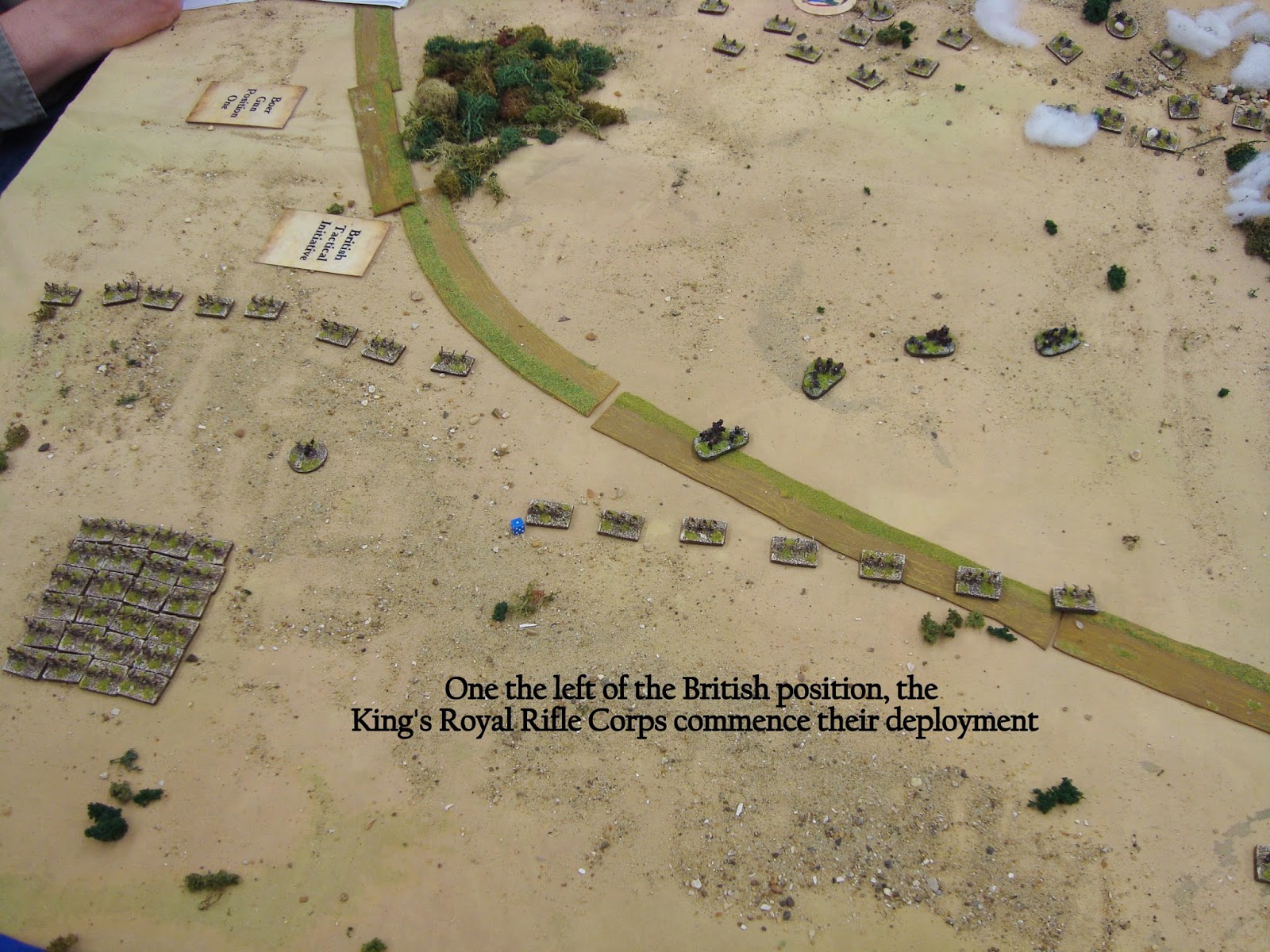 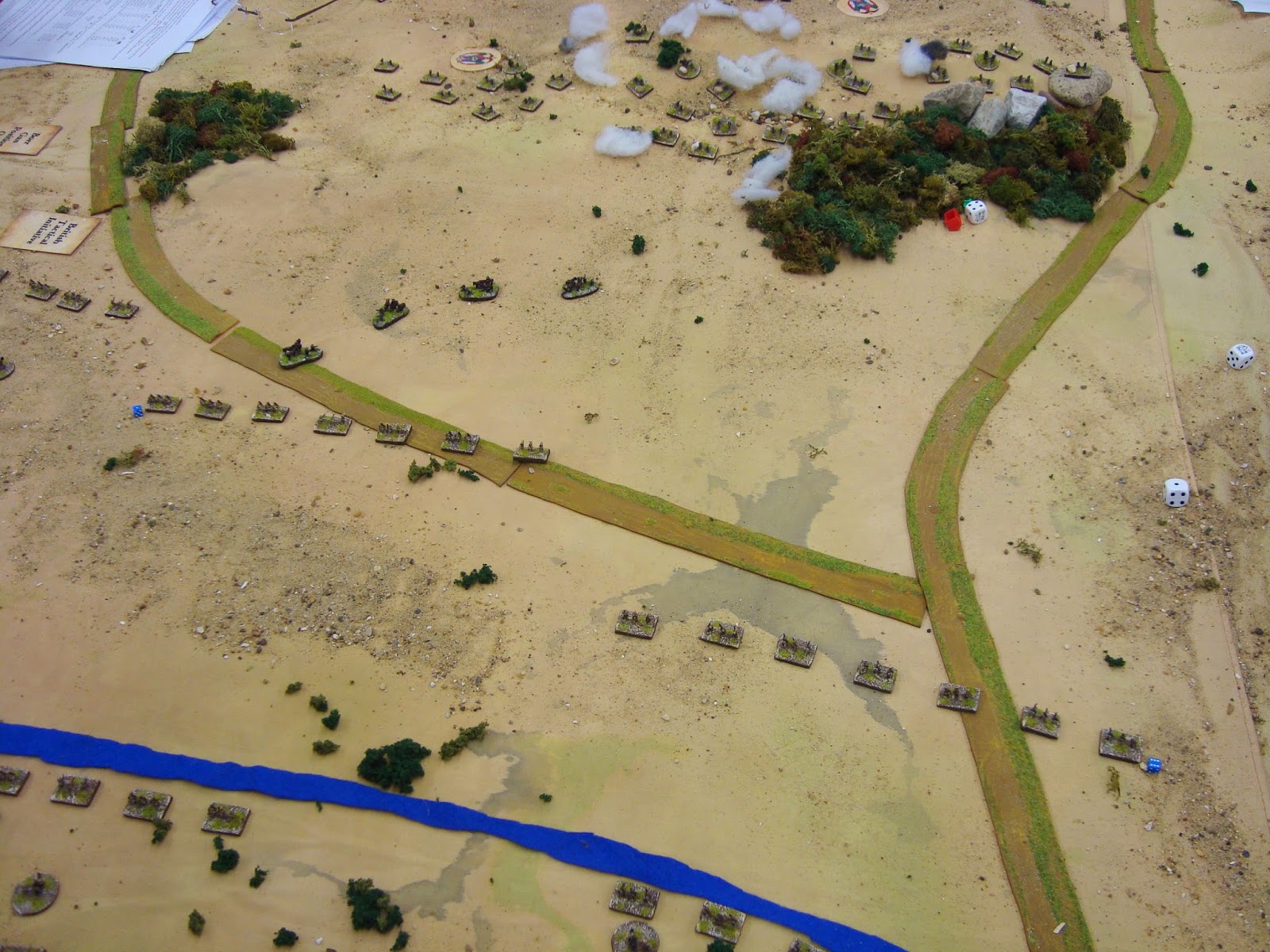 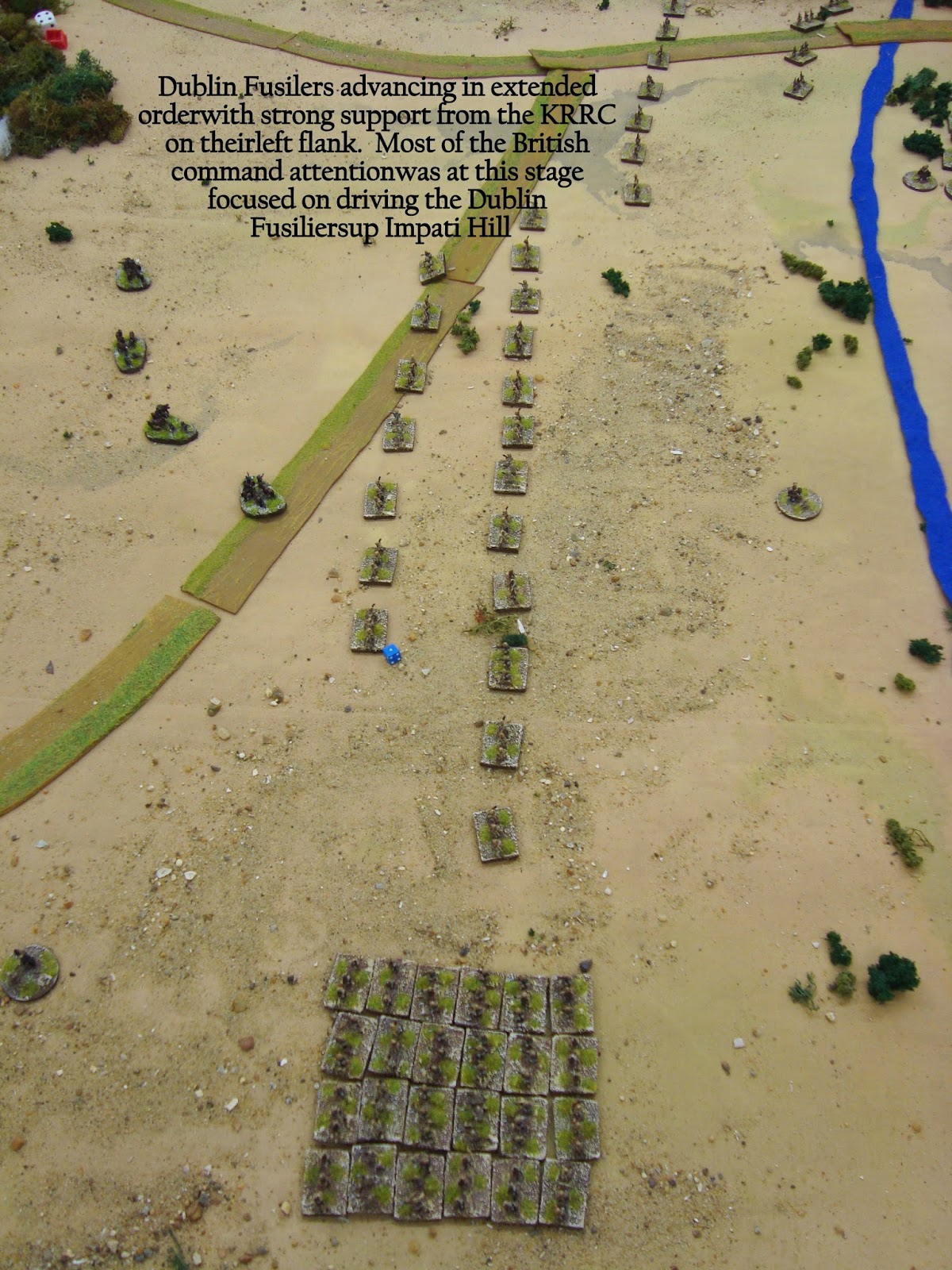 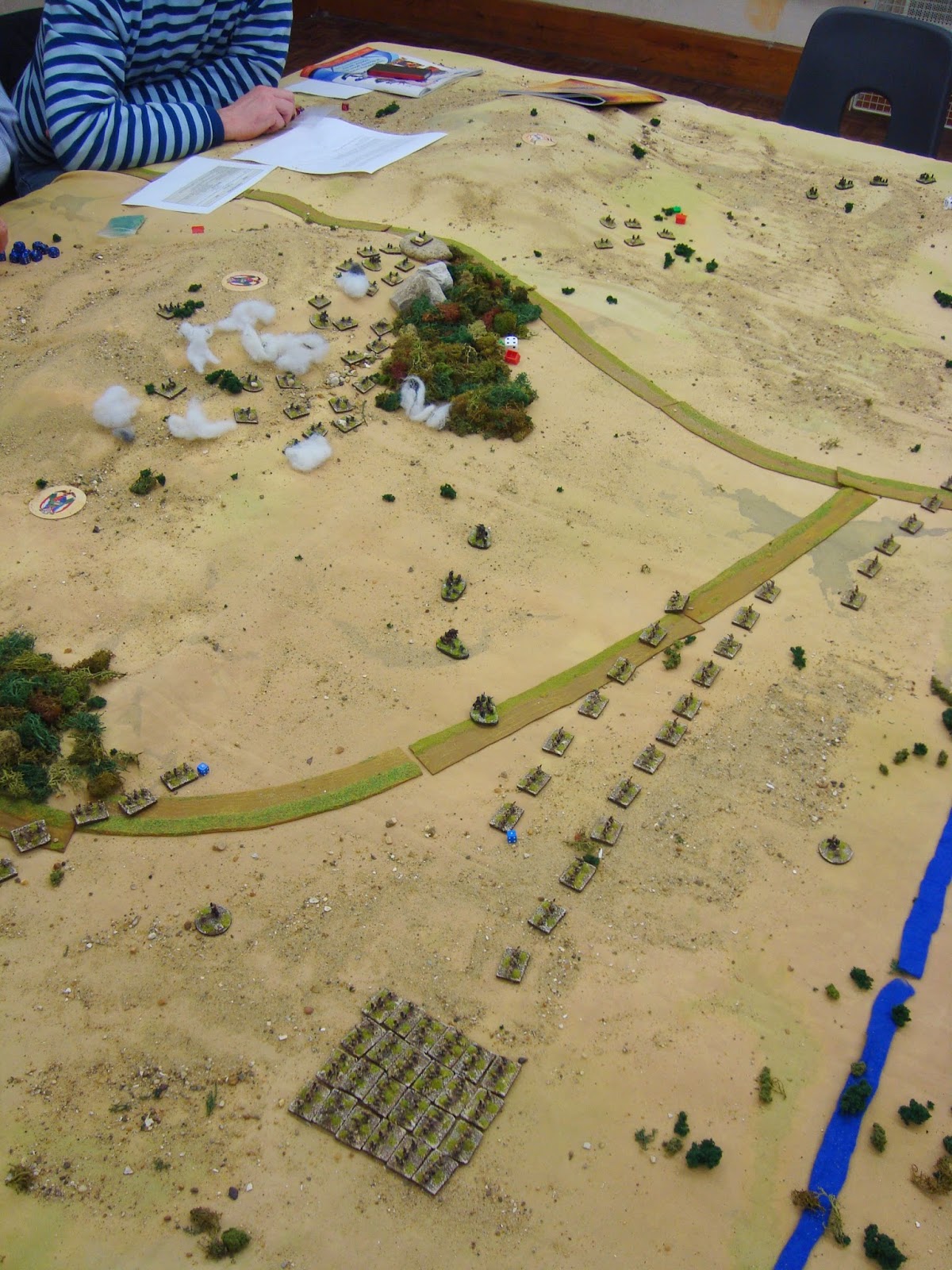 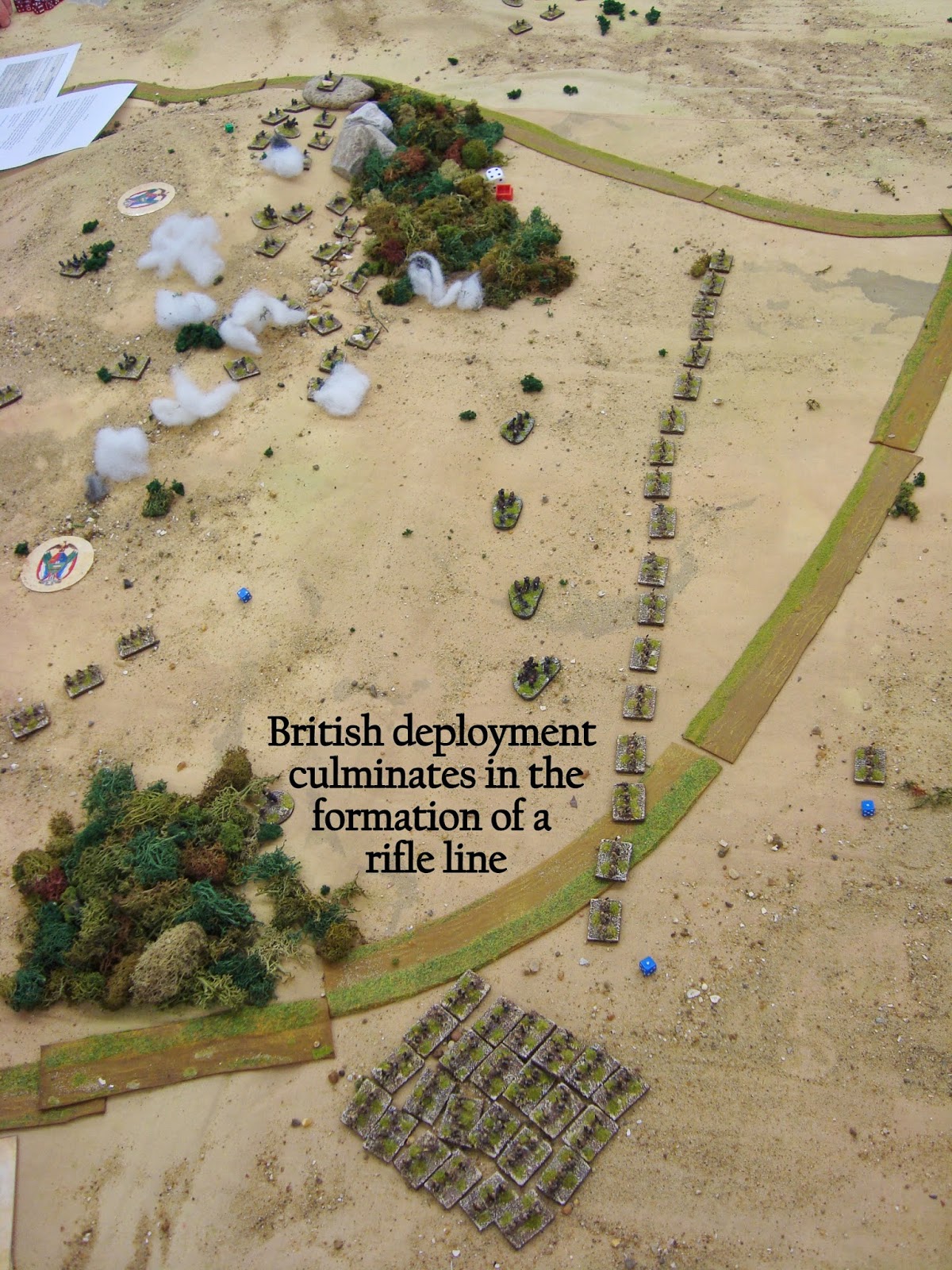 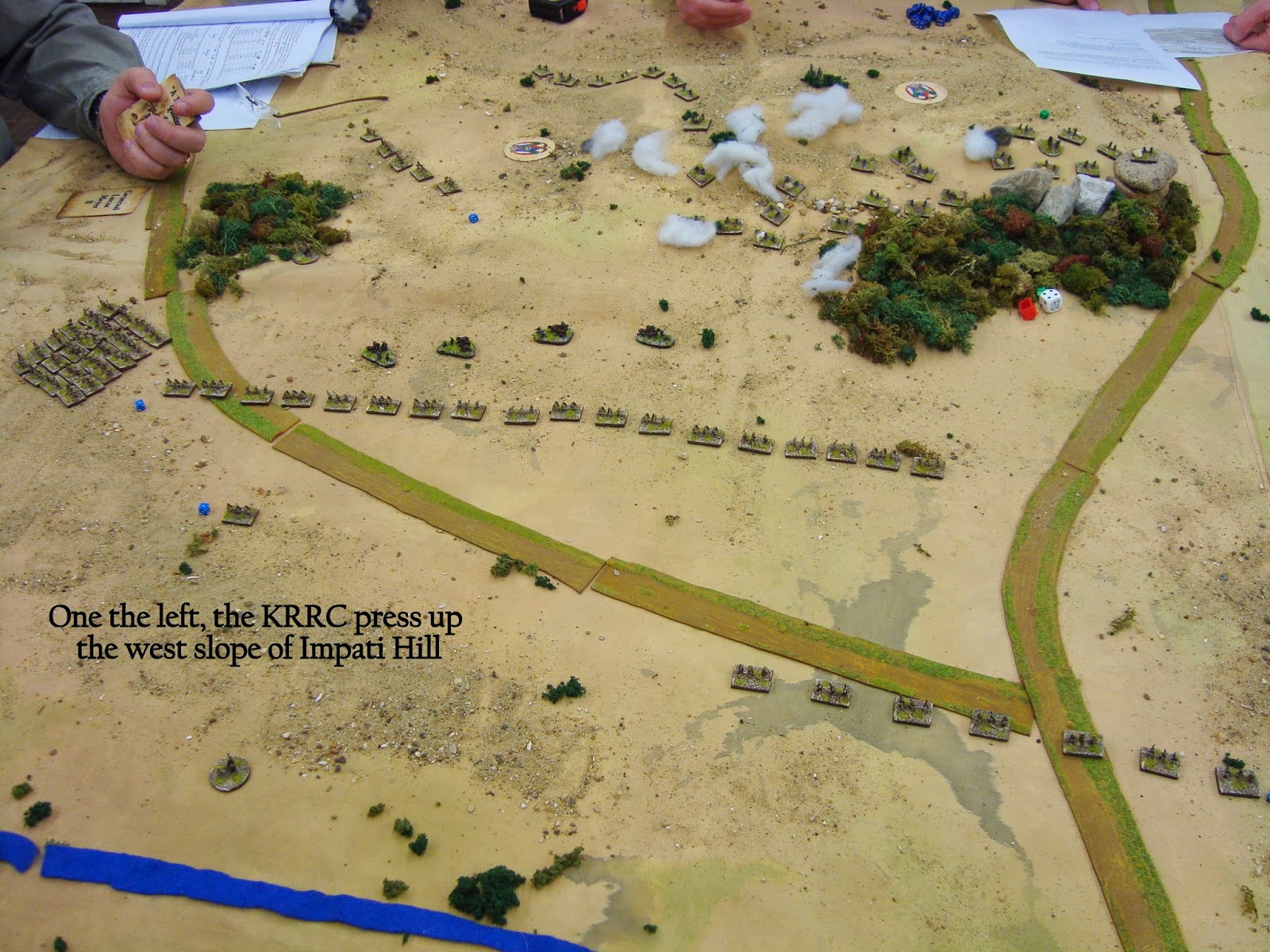 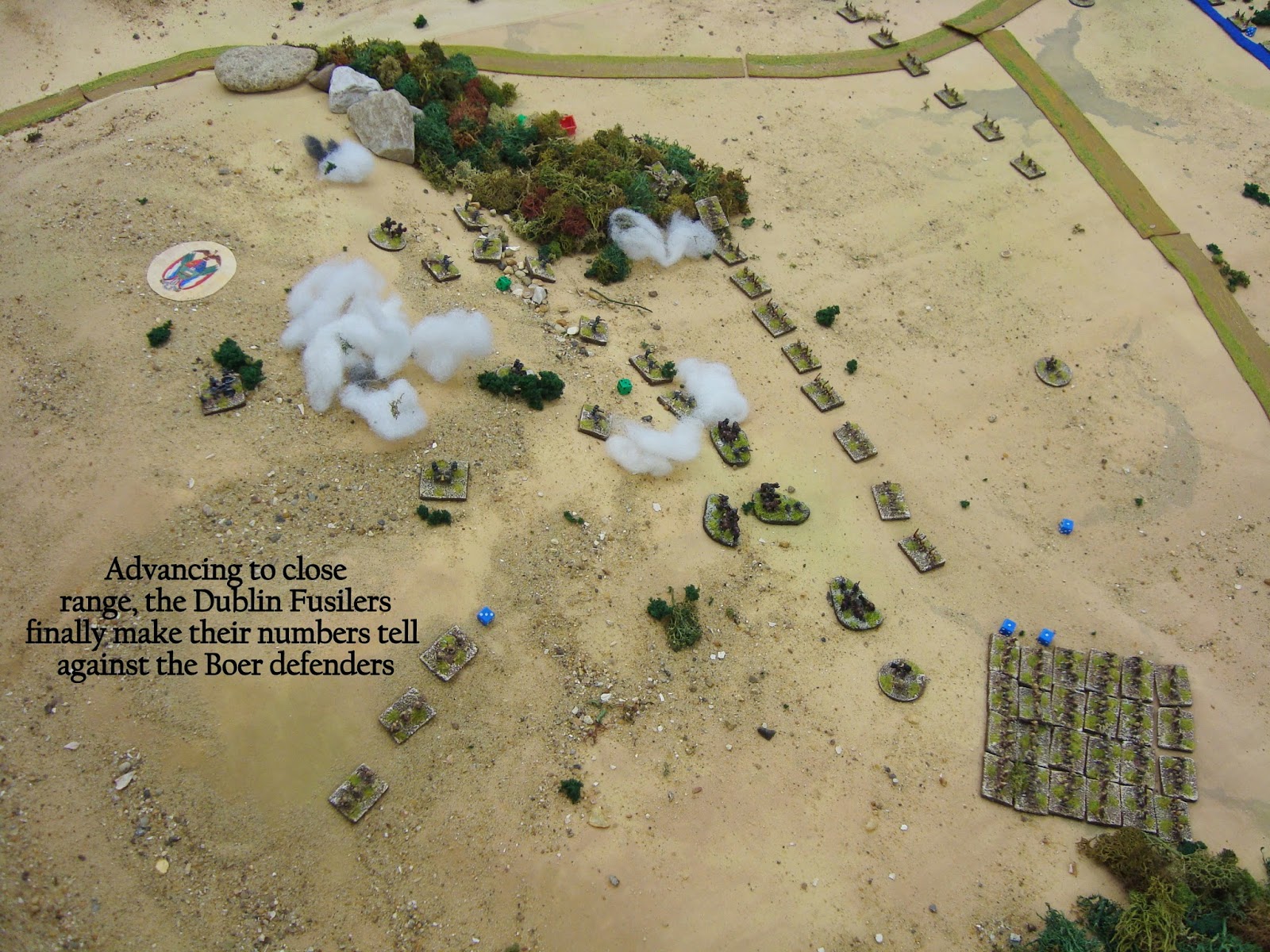 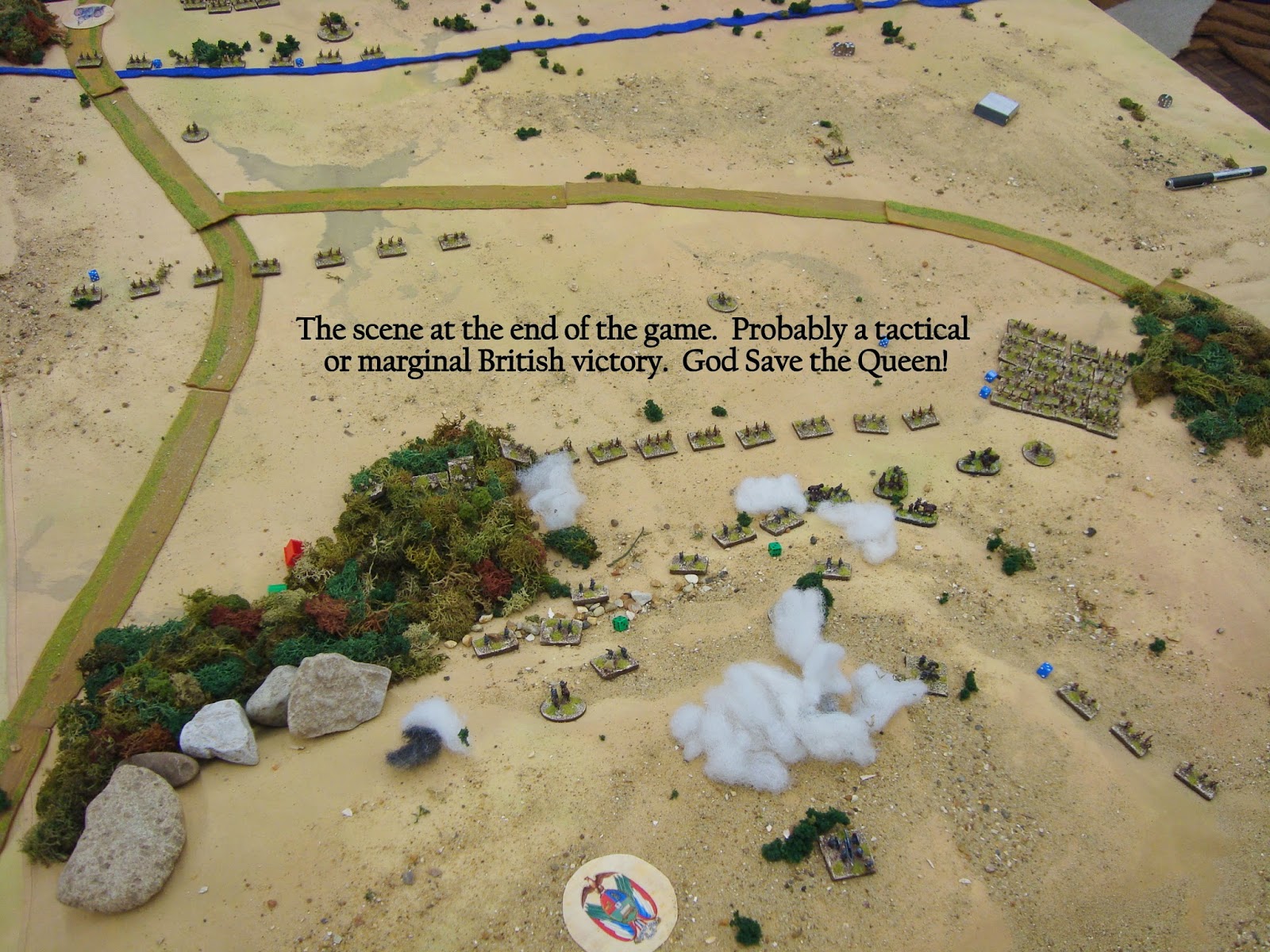 1.  The Boer Wars are a wonderful period to recreate, with numerous engagements, balanced but very differently configured opposing forces and variable commanders (particularly on the British side).  The sources are numerous and in English.  Some, perhaps many, of the tactical developments foreshadow, or influence, the tactics used in the opening months of the Great War.

2.  The Baccus 6mm figures are admirably suited to grand tactical battles.  They looked perfect on the tabletop. 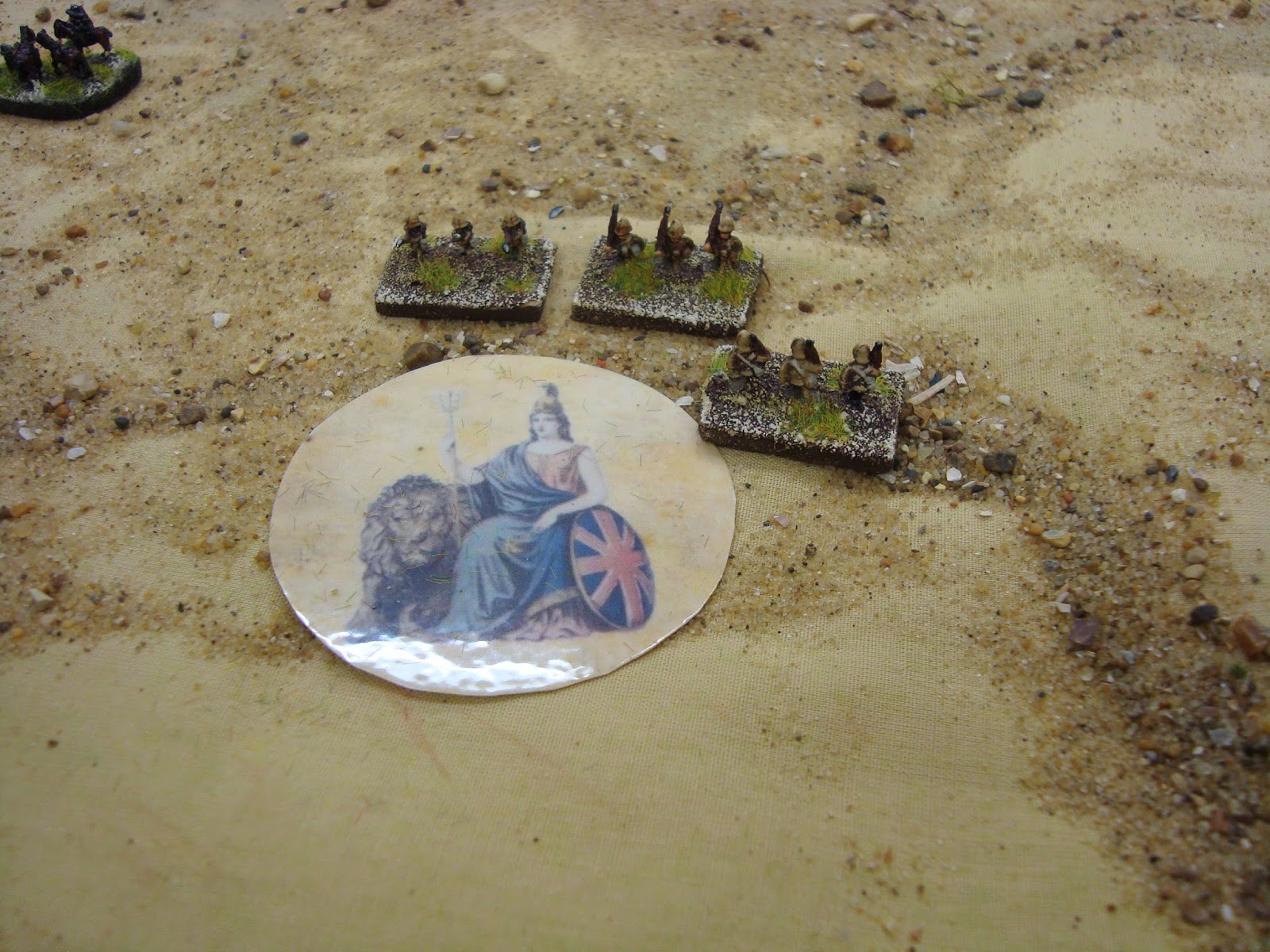 3.  Integrating card-driven mechanics into the rules is proving interesting.  We are working on a number of variations involving tactical initiative cards - enabling these to be used in certain situations to provide impetus, or rallying, but at the risk that the initiative card may be lost or "burned".

4.  Playing the British forces (particularly infantry) is hard work.  They are somewhat unwieldy in the face of Boer Commando tactics and can be awkward to deploy.  Once deployed and moving, however, they are formidable.  Getting the British infantry to deploy and move forward aggressively is the main drain on the British command.

5.  Playing the Boers requires finesse and skill.  There are numerous tactical opportunities, but the forces are small and fragile if poorly deployed.  British artillery is a killer once finally deployed. 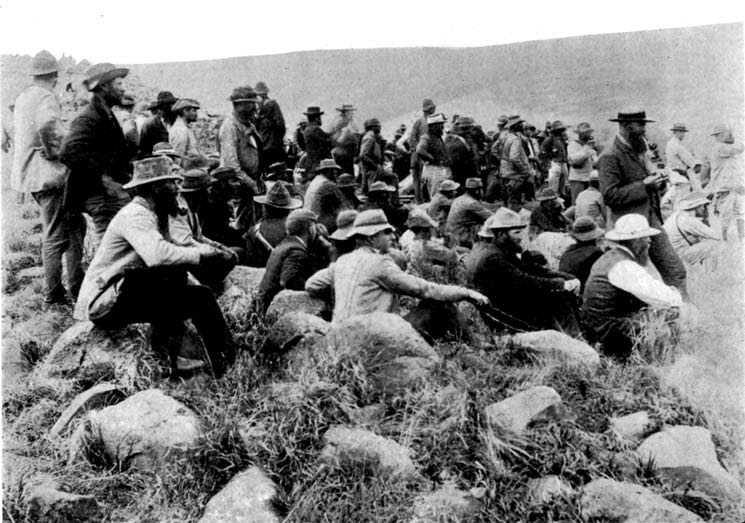 I'll finish by mentioning that we're hoping to run through other Boer War engagements over the next few weeks.  Hope you can join us for those! 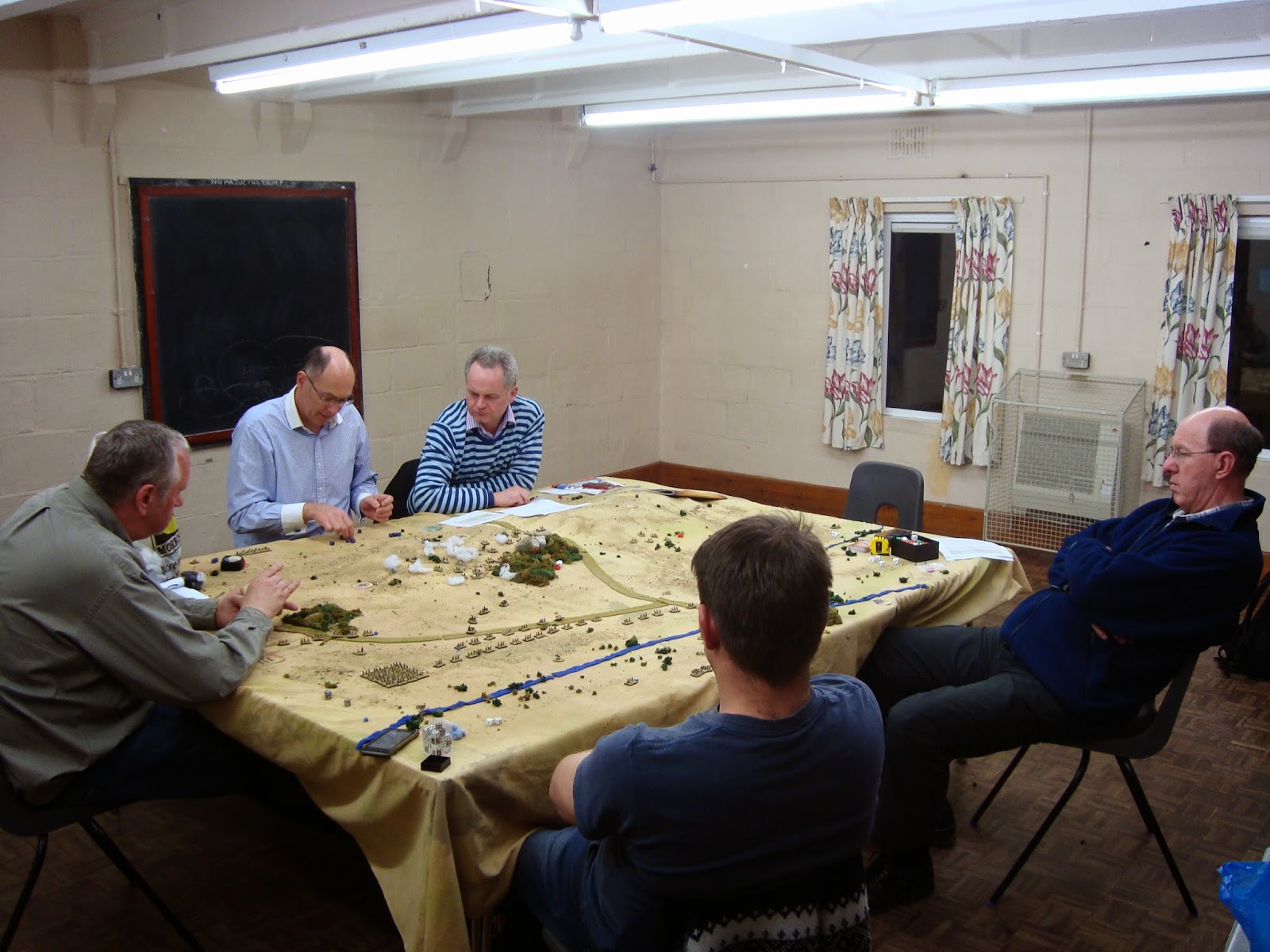