The other piece of good new is that the third edition of Wargame Bloggers Quarterly is now available, free of charge.

You can pick up your issue HERE 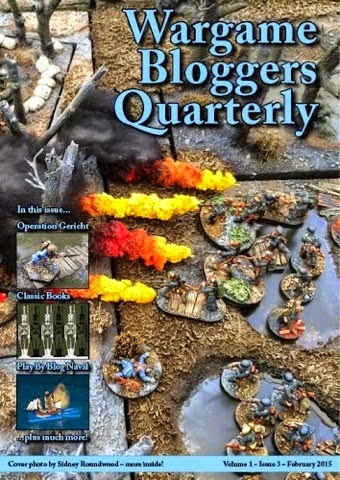 And yes, the editor for this issue, the super-talented PK, very kindly has featured my "Operation Gericht" game from Partizan in the Park last June, with the photo from the Germans' flammenwerfer attack in the second game making the cover.

I was very grateful for this honour, and it came as a complete surprise when I found out.  As I mentioned before, all of the four Operation Gericht games we played last year, at both Partizan and Evesham, were great fun and huge thanks go again to everyone who took part in wonderful spirit.

I promise to get around to posting the backgrounds and scenarios to the "Operation Gericht" game here shortly.

As for Wargame Bloggers Quarterly, I've taken the reins as editor for the next issue, number 4.  The first three issues will be a very hard act to follow.

Email ThisBlogThis!Share to TwitterShare to FacebookShare to Pinterest
Labels: Blogging and the Blogosphere, Wargame Shows, Wargames

It's taken me quite a while to get started with this year's Painting Challenge, hosted by Curt Campbell over at his splendid blog "Analogue Hobbies".  Nothing but the usual excuses, I'm relieved to say - general family stuff, work, winter colds - although my daughter's swimming routine which starts at 5am every Friday morning is pretty much wiping out Thursday evenings for me.

So, in brief, these chaps have been much delayed making it here on to the blog.  Which is a shame, as they were fun to do.  First up, there's two French 75mm artillery pieces from 1917, with 28mm Brigade Games late war French crews.  The guns are made by Great War Miniatures and fit together very easily.  The guns can be mixed very well with the Brigade crews. 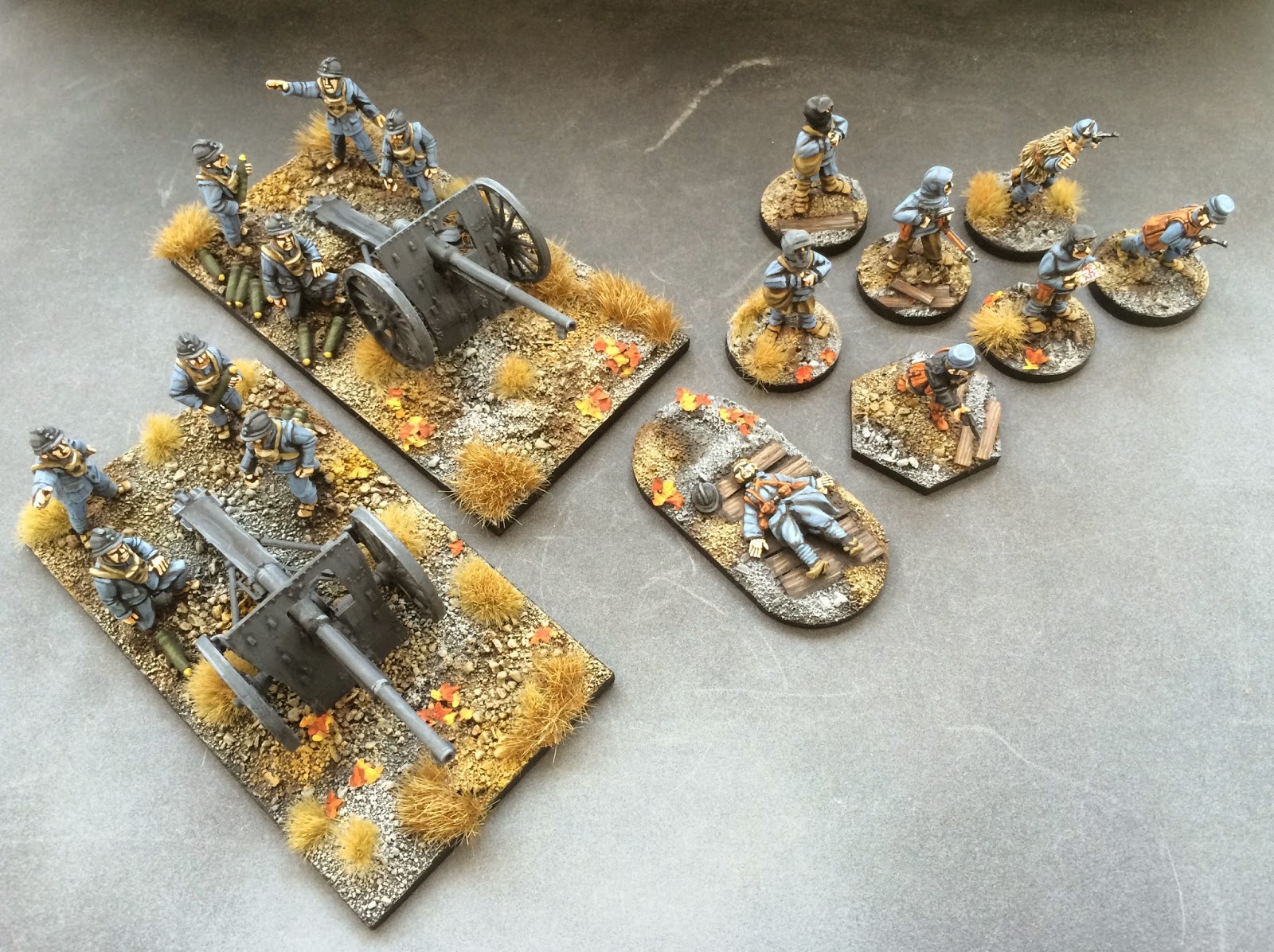 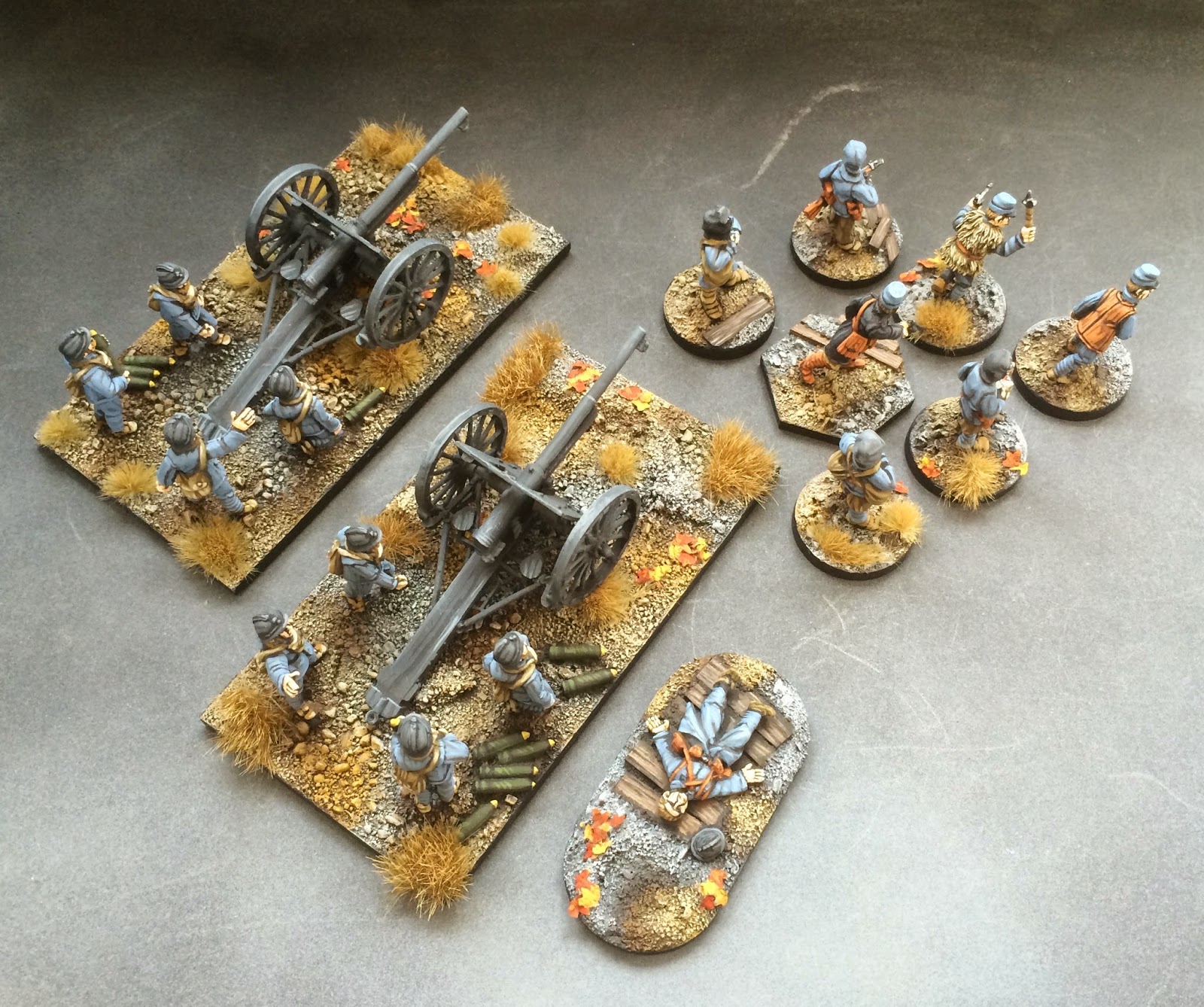 Also, I wanted to paint up a small force of French Trench Raiders from the First World War.  I really struggled to find any detailed information about French raiding, although I found enough to be able to tell that it certainly happened.  Without photos, it was a bit difficult to recreate that these chaps might have been equipped with.  I therefore too the easy route for figures, converting some Musketeer Miniatures British trench raiders, and some Brigade Games French officers, with the addition of Woodbine Miniatures heads.  I have a vague plan to do some trench raiding later this year as a fill-in game at the club, with the French and German raiders mutually looting each others' trenches and amassing all kinds of interesting loot.  Possibly not the most serious of games, but certainly fun nevertheless! 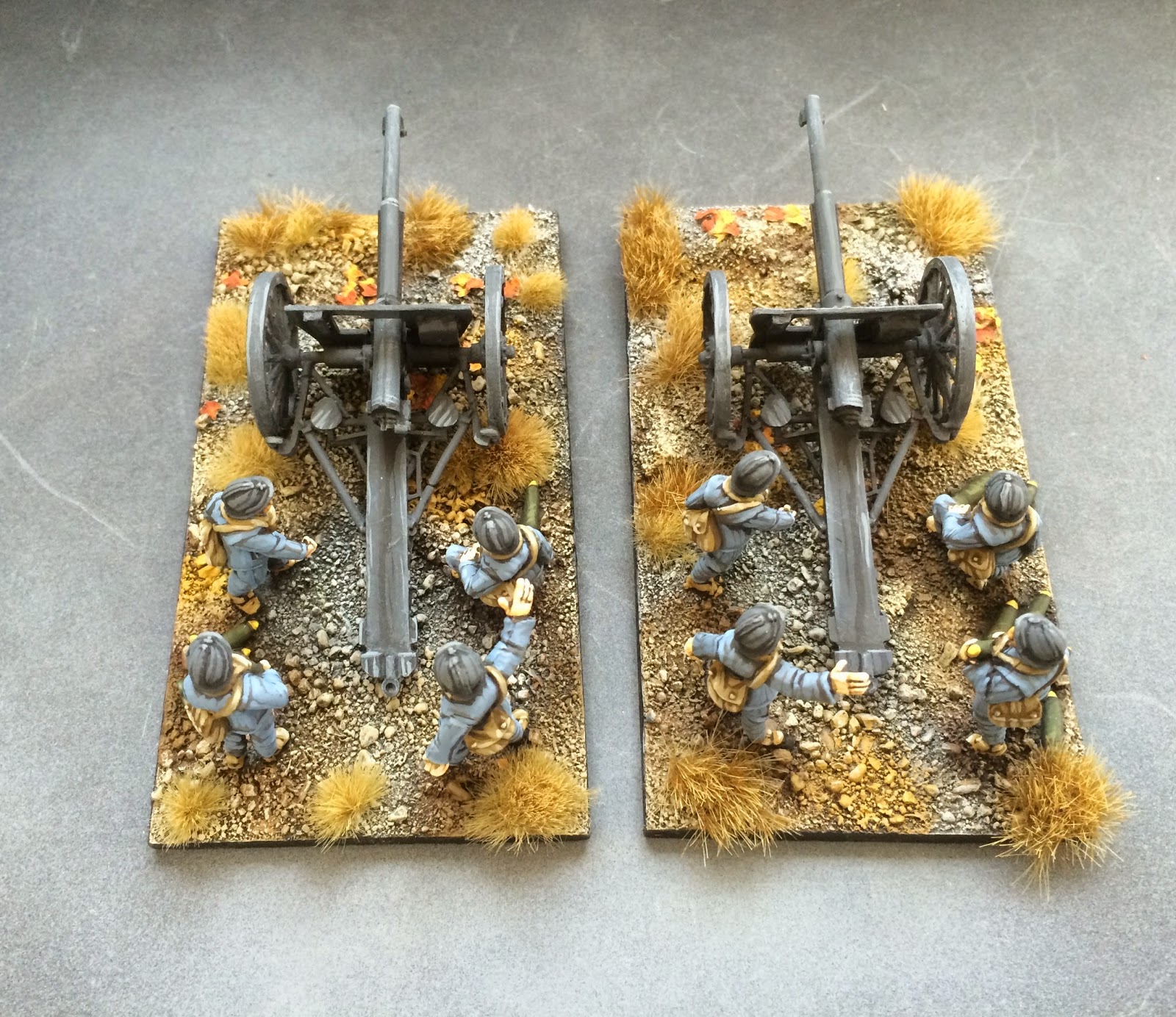 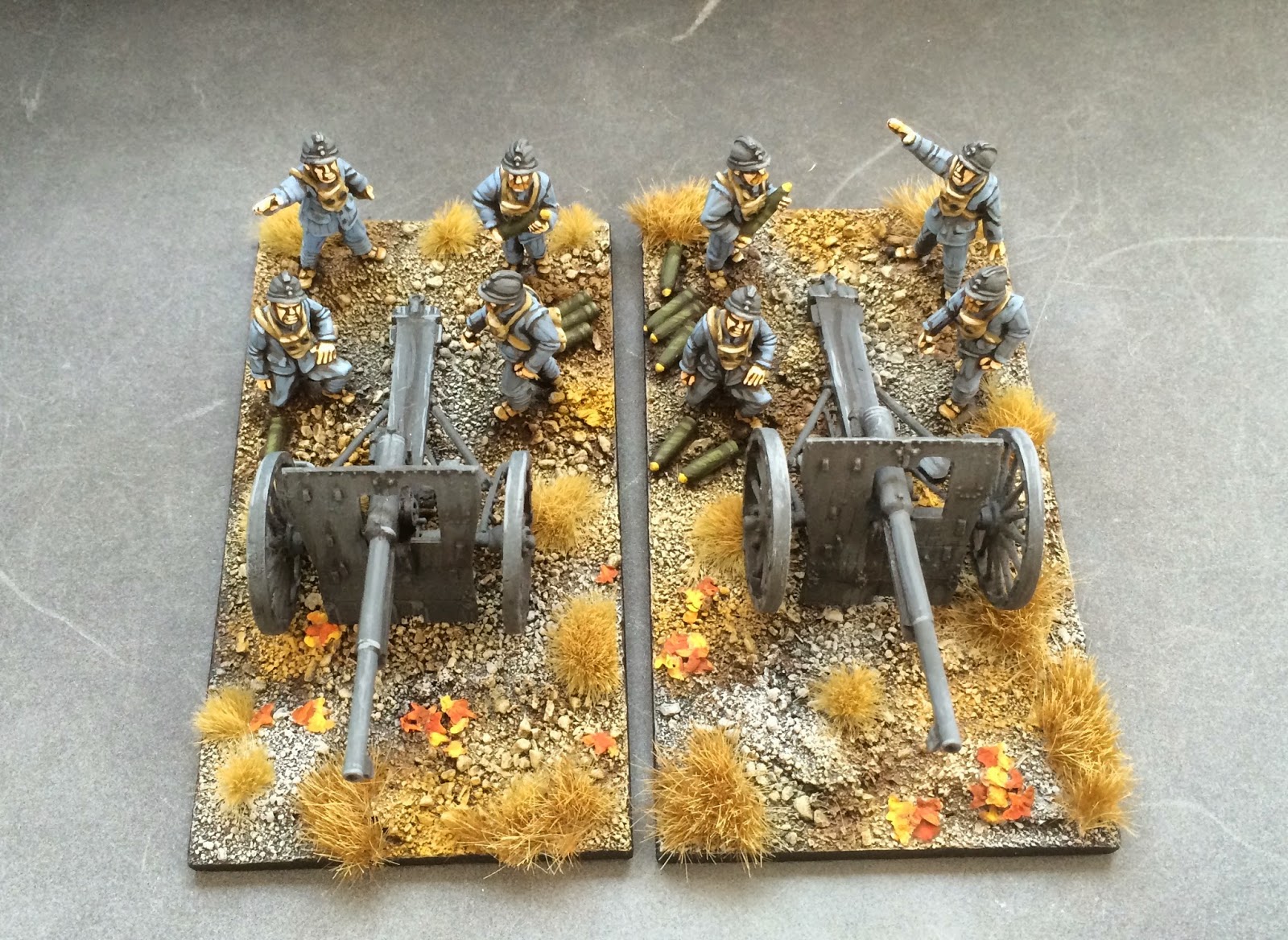 The next figure is the first test figure for the Tirailleur Senegalais.  I tried a few times to get the figures skin tone right, and what you see here is the result of some experimentation.  I also wanted to try and ensure that the tone can be achieved with simple Vallejo Model Colour paints, so that it should be easy to replicate for me, and for you!

I'd like to post the paint formula for the skin tone for the Tirailleur Senegalais, and also the Tiralleur Marocains I did last year, on the blog in the next few weeks.  I just want to paint a few more figures before posting anything - which, conveniently, gives me a chance to ask you what you think.  Does the skin tone look OK? 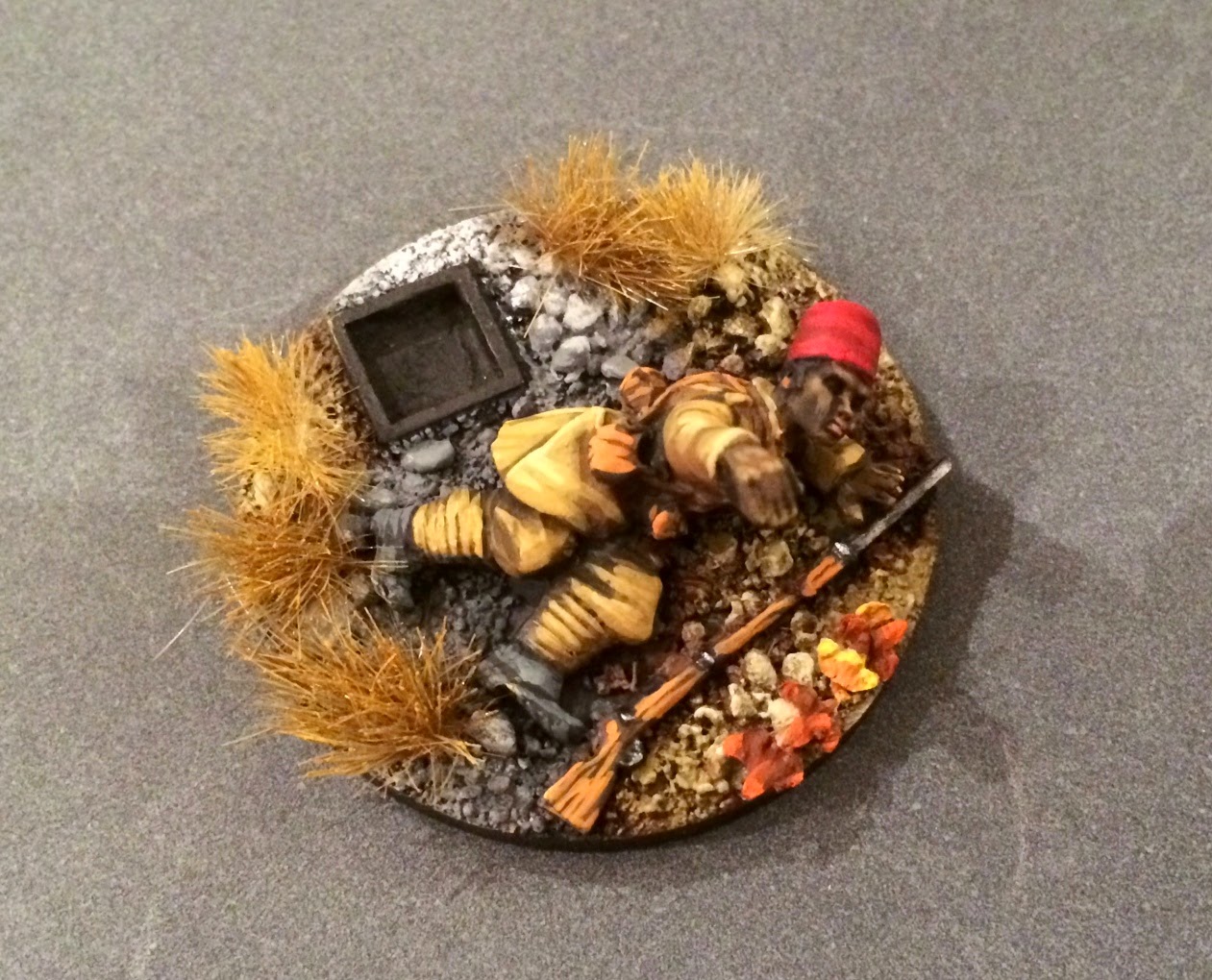 The figure is one of the very nice Old Glory 28mm French casualties, with a Woodbine Miniatures head-swap.  The black port on the base is to fit a casualty or "shock" dice into.  Grassy tufts from Silfor.  There are 80 of the Tirailleurs to get through, all of which I have converted (and yes, my fingers have almost recovered).  Fortunately, I think the uniform colour - a kind of khaki/mustard/ochre dye tone - seems to be a lot easier to get the hang of than Horizon Bleu. Again, any comments welcomed! 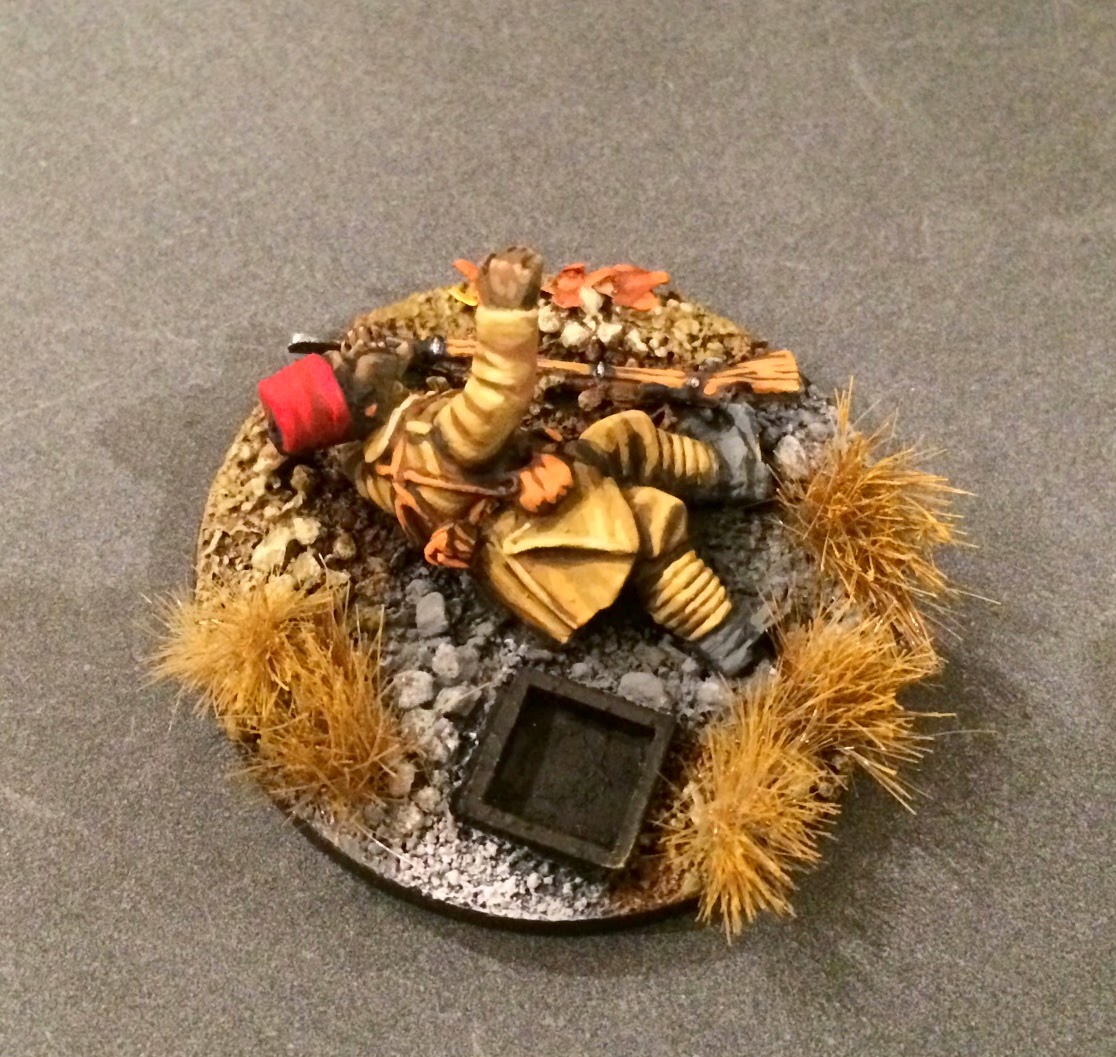 I couldn't resist a photo of the French Soixante-Quinze side by side, with both intact and destroyed guns.  I tried to get the ground work consistent, with suitably autumnal leaves and more grassy tufts across all of the bases. 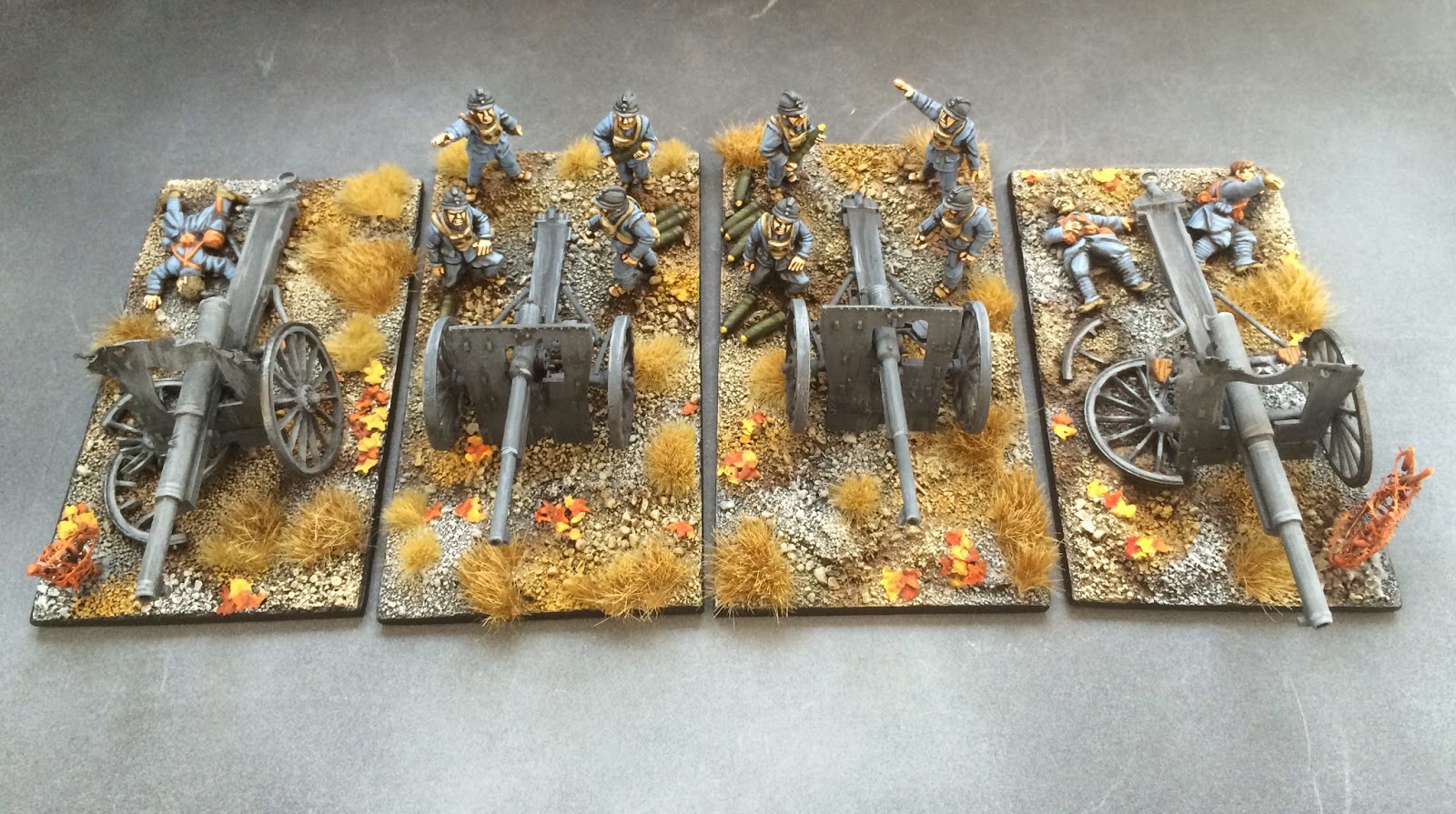 Next up, hopefully some more painting for the Tirailleurs - I've a couple of infantry sections and a Hotchkiss machine gun I'm working on - plus a couple of other things, including the latest edition of Wargame Bloggers Quarterly, which is just about ready to roll off the presses!
Posted by Sidney Roundwood at 11:49 65 comments: