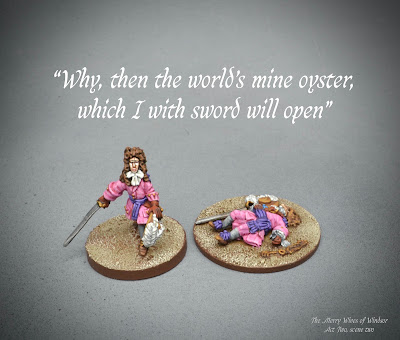 Since May this year, I’ve been working on a discrete project which is a lot smaller than my current Laarden 1688 obsession. It’s far from being a complete project - in fact its barely started - but I thought it was a good time to mention it here on the Blog. 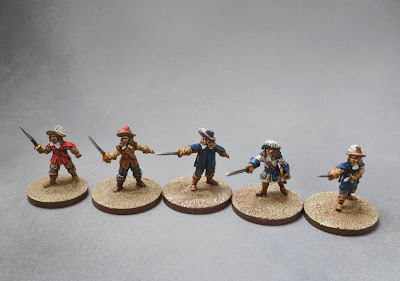 Paris, 1622 - City of Glitter and Treachery
Back in 2019, I talked with my good friend, Nick Skinner, about developing a skirmish game based on the adventures of the “Three Musketeers” from the pages of Alexandre Dumas. We thought that the exploits of Athos, Porthos, Aramis, d’Artagnan, Milady, Rochefort and Cardinal Richelieu were perfect material to be transformed with the treatment of Lard.
By one of those unexpected coincidences, another good friend of ours, Martin at Warbases, also mentioned about that time he was hoping to find some rules which were suitable for the period to accompany Warbases' fine range of miniatures (which were inspired by one of the excellent, recent TV dramatisations of Alexandre Dumas’ books).
We've barely started on the rules and play-testing, but it’s an exciting time - stepping out into Paris of the early-seventeenth century to cross swords with a multitude of rivals, enemies, factions and adversaries. We’re hoping for a game which is very portable - with our first play-testing being on a board 18 inches (about 48cm) square - and with a low figure count, possibly only a dozen figures a side. 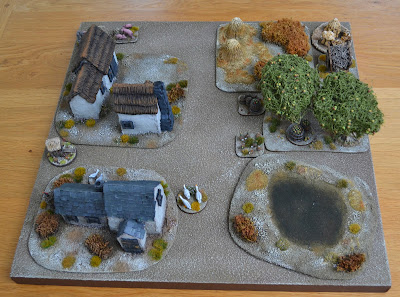 Hopefully, history will not be forgotten as we travel the dusty roads of Champagne and the Île-de-France. I've been reading through manuals and treatises on the different schools of fencing from the late sixteenth and seventeenth centuries. Hopefully, we can introduce rules for various schools of swordsmanship into our games - whether they are the Italian Schools of Bologna or Venice, the evolving styles of fencing with rapiers, or the styles of fencing practiced in the Salle d’Armes of Paris established by notorious gentlemen of the blade following the examples of François Dancie or Girolamo Cavalcabo.
And, with luck, the single-based figures can also be recruited for use into larger-skirmish games of "In the Buff" or "The Pikeman's Lament". 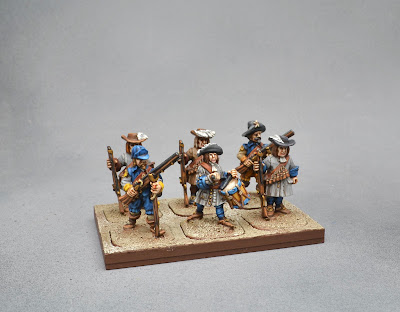 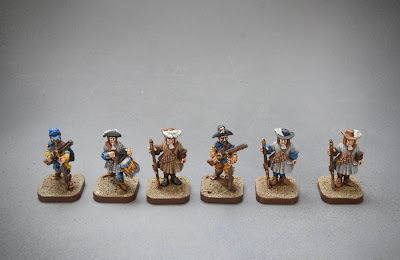 As for the figures, I thought 28mm worked best, using a mixture of Les Mousquetaires du Roi and the Garde de Richelieu from Warbases and Brigade Games, with some extra figures from Dixon Miniatures, Wargames Foundry, 1st. Corps and the lovely 1898 Miniatures range. As there'll be fewer figures on the table, it should also allow us the scope to create some fun conversions, vignettes and green-stuff lunacies.  Here's two converted figures from a favourite miniature in Dixon Miniatures' wonderful "Grand Alliance" range. 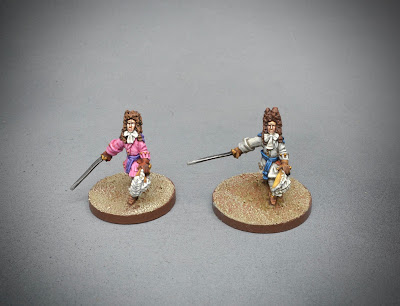 I've experimented in basing the main characters on circular MDF bases of 30mm or 35mm. I think they look good on the slightly larger sized base and it makes them easier to handle.  The larger bases can accommodate small blood markers depicting when a character is wounded - something useful to track in a small scale skirmish game.  To try and make these characters distinctive, I've swapped the right arms, added green-stuff lace, and created some special casualties for the characters (including silly things like a green-stuff dropped key to the Royal Chambers of the Louvre Palace). 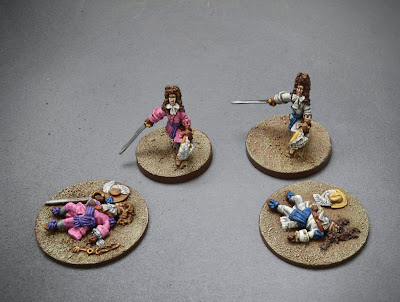 As we're dealing with a small skirmish, I thought it was worth adding plenty of casualty figures for not only characters, but also the henchmen and ruffians on the tabletop. 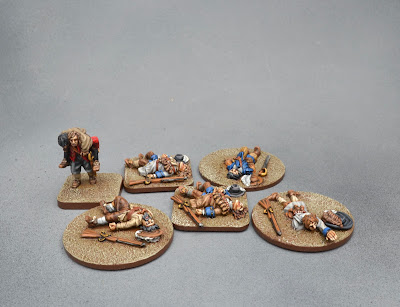 In the fighting and duelling, we've been trying out rules for stumbling swordsmen and dropped weapons.  No one makes figures or bases for these, so I felt like making my own, together with some figures for prone swordsmen.  The two prone swordsmen below were converted form 1st. Corps casualties, with swapped-out Redoubt Miniatures' heads with green-stuff ruffs and cloaks. 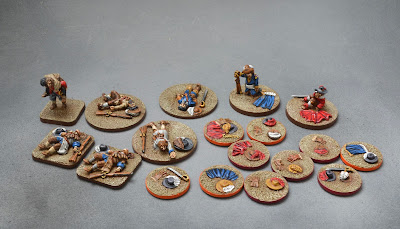 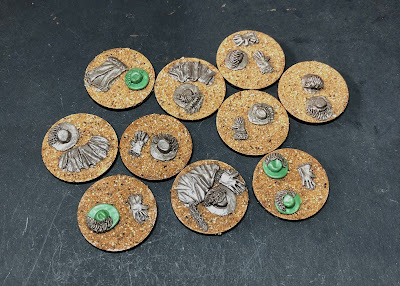 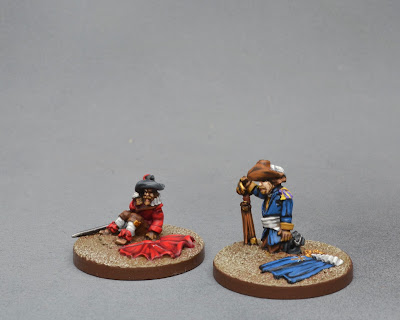 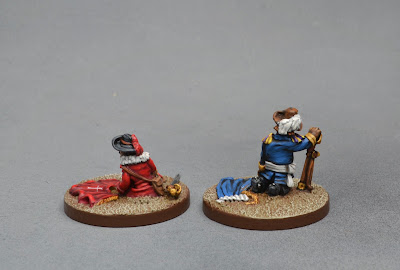 Storing the stumble and dropped weapons bases on a magnetic board makes them easy to bring out for each game. 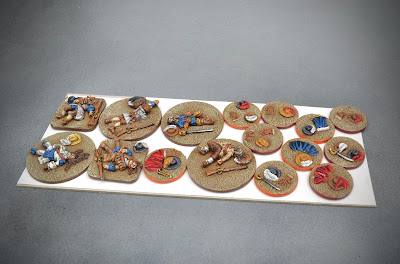 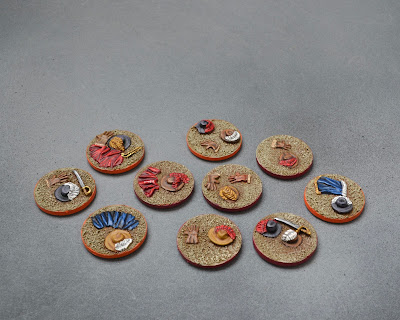 I've added common soldiers, ruffians, henchmen and civilians to the project.  I've experimented with adding these to 20mm or 30mm square bases (with rounded corners). These store really nicely in foam trays.  The Dumas novels are packed full of intrigue, disguises, spies and agents - so there's plenty of opportunity to assemble a cast of citizens which can fit into any Parisian location. 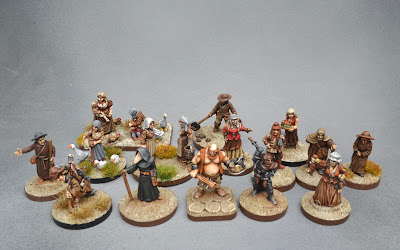 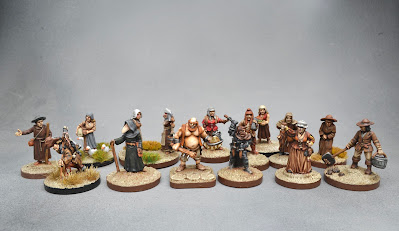 The threatening figure of the jailer in the front rank is a lovely Heresy Miniatures figure, which sadly now seems to be unavailable.  Somewhere, I have his partner-in-crime wielding a poker ... but I'm not sure in which box it's in....!  The other figures, below from left to right, are a Citadel Miniatures ratcatcher (with a Redoubt Miniatures head-swap), a lovely Warbases plague-doctor and a dagger-throwing Midlam Miniatures assassin. 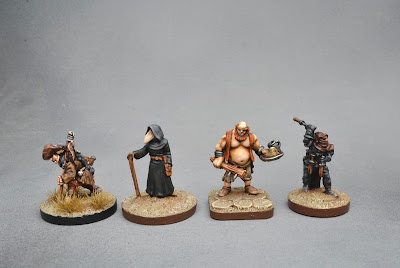 Finally, and with a nod to future games, I could not resist painting up Louis XIII and Anne d'Autriche.  These Warbases miniatures painted up beautifully.  Any resemblance to Alexandra Dowling and Ryan Gage is ... well, I may have to paint up another pair of figures to get it just right! 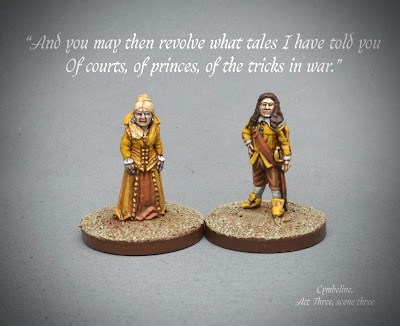 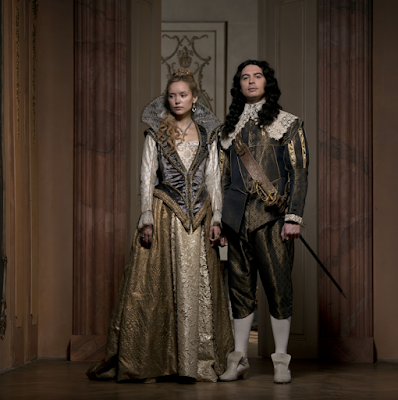 I'm not at all sure what the final rules will look like, so all this might change...  So far we've been experimenting with a few, core characteristics.  And, of course, that's a chance for some more very self-indulgent cards to place at the players' disposals. 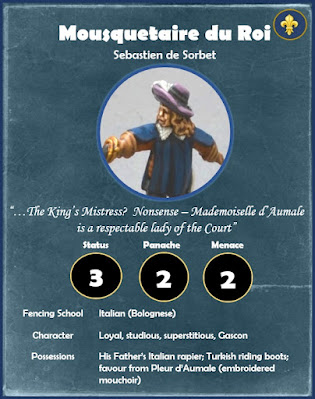 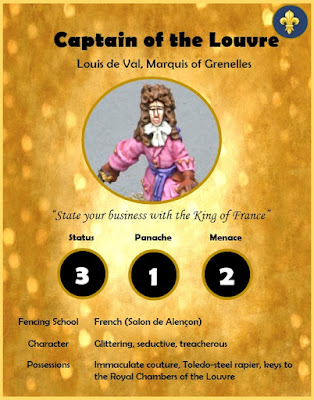 That's all for now, but hopefully in future posts I can post a few pictures of the games we've been playing, and explore our Paris of 1622 in a little more detail.  Hope you can join me for that next time.
*******
Posted by Sidney Roundwood at 21:05 59 comments:

Email ThisBlogThis!Share to TwitterShare to FacebookShare to Pinterest
Labels: 17th Century, All for One, Flashing Blades, Wargaming with the French
Newer Posts Older Posts Home
Subscribe to: Posts (Atom)