I’ve posted three photos in this post comparing the size of 28mm late Great War French infantry figures. As you can see, the figures are of comparable height, but appear to differ quite a bit in size and heft.

The broadest and bulkiest are the Scarab Miniatures figures, which are cast in a very solid, dense metal. They are truly robust figures, and take paint very well. I like them a lot, especially for the specialist figures in the Scarab Miniatures range – the battalion command, the communications troops and the French rations and soup carriers, les Hommes Soupes. I tend to feel that the Scarab Miniatures infantry figures are not quite a perfect fit with the Brigade Miniatures figures, which are of a comparable height (as you can see) but which are nowhere near as broad or bulky.  (I would say that when viewed at three feet from the wargames table, any differences in height and bulk seem less pronounced than when the figures are placed side by side in the photos in this post).

The Brigade Miniatures figures are, with their helmet included, a shade over 28mm. There’s a pretty decent mix of figures in the Brigade range. The earlier sculpts had a large number of helmet covers, which are really only suitable in large numbers for late 1916 and early 1917. Brigade have recently brought out an extra pack of all-plain Adrian helmeted infantry figures, thereby enabling the units to be more balanced in their historical helmets.

The Brigade figures fit very well with Woodbine figures (from the Gripping Beast stables), which are of an almost identical size and breadth. The Woodbine figures have the advantage of having multiple heads for the French, ranging from the Adrian Helmet to the Zouave Checia.

The final figures in this brief review are from Old Glory. These are the smallest figures by comparison with the other manufacturers, perhaps best being termed as being 25mm rather than 28mm. The Old Glory figures are quite chunky in themselves, being easily as broad as the Brigade Miniatures figures and therefore being a pretty reasonable match alongside Brigade Miniatures figures provided that the slight height disadvantage is compensated – I’ve used slightly thicker bases for the Old Glory figures adding an extra one or two millimeters to the base as height compensation. Old Glory also do some very nice sculpts which the other manufacturers do not produce, such as a dedicated casualty pack (although Woodbine have recently brought out some French casualties which I have not yet seen), French infantry in M2 gas masks and French tank crew (shown here). With slightly thicker bases on the table top, their slightly smaller size is not going to be noticed from three feet away.

It’s possible with the anniversary of the Great War over the next few years that some other figures for late war French will be manufactured, so hopefully this review will just be the first of a few comparisons between the available figures.

Finally, one of the best things about collecting the late Great War French is that all of the manufacturers featured here have given great, prompt and helpful service to me in purchasing their products. I can strongly recommend all of them as manufacturers and suppliers from personal experience.
Posted by Sidney Roundwood at 21:57 21 comments:


It’s been a while, hasn’t it? June and early July were pretty frantic for me with work, and I didn’t manage to blog anything and notably failed to keep track of everyone else’s fantastic blogs – so many, many apologies for that. It happens, occasionally, although this year has been particularly challenging in finding spare time to hobby in.

But, as all-round wargaming champion blogger and top bloke, Mike Whittaker, would say, “Never get off the bus, Sidney”. So I’ve been trying to keep the sacred hobby fires burning by painting up another section of French late war infantry and some very fine French battalion and higher command figures from Scarab Miniatures. 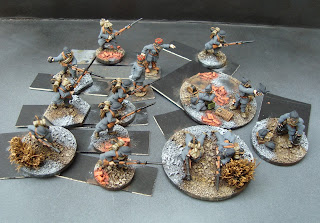 What you see here is at about a 60 per cent stage, with a lot of work left to do on the uniforms, helmets and metallic. I also need to add a few extras to the groundwork of all the figures. Barbed wire, shell fragments…..that sort of stuff. 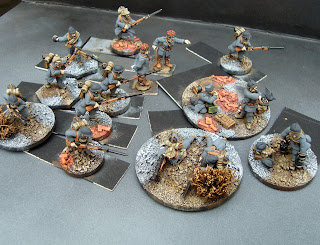 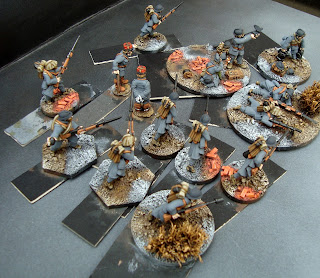 The Scarab Battalion Command is a particularly nice set. I’ve combined a set of senior officer figures with a set of communication figures. I particularly like the pigeon being launched by the grizzled Poilu with a fine moustache. 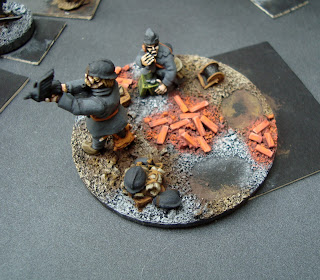 I also painted up a small, prone Chauchat team from Brigade Miniatures. These have been fun to do, not least because the moulded face of one of the figures was….well, kind of melted and indistinct. You know the kind of figure – the one you see out of the pack and you think, oh dear, scrap heap for you old chap. However, one of the useful things about the French M2 gas mask is that it’s very easy to sculpt onto a figure. Basically a leather bag with two glass eye disks. 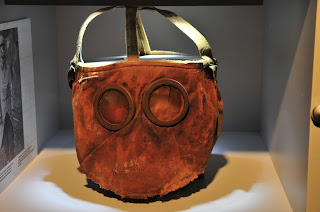 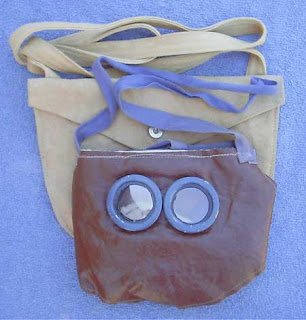 Making a mask for a figure is therefore pretty easy. Simply file down any features left on the face, add a blob of grey- or green-stuff for the mask, smooth it down and then add two small circles of grey-stuff for the eye disks and you’re just about there. The result isn’t Paul Hicks standard, of course, but it should pass muster at the three feet observation distance from the surface of the wargames table. 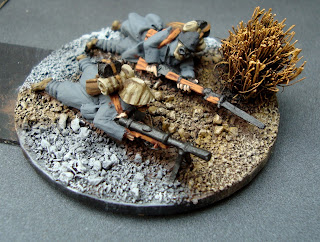 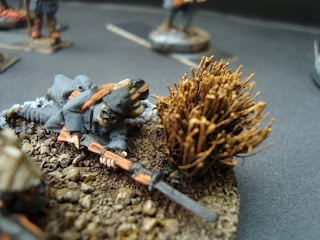 Next post, I’ll try to feature the scale comparison between 28mm French late war figures. I’ve got Scarab, Old Glory, Woodbine, Forgotton & Glorious and Brigade Miniatures to compare, plus a couple of extras. So fingers crossed for next time!
Posted by Sidney Roundwood at 11:17 35 comments: