A Spring Clean and a new Monthly Theme

I've made a few changes to the layout of this blog over the past day or so.  The aim is to make it easier to read, easier to navigate around and just more user-friendly.

When I started the blog, a couple of years back, I had no idea how long I'd keep it going.  What began as a record of terrain building has spread to miniature painting, battle reports, book reviews and wargames show pictures.  As I've blogged, I've tried to track everything through the topic headings on the right, but I can see that they're getting a bit long and unwieldy.

That's why I decided to give the blog an overhaul - a spring clean if you like.  A huge thank you in this regard goes to Frontline Gamer, whose excellent site had a post on blogging a week or so back.  Almost all of the ideas for spring cleaning came from him (and, as ever, any mistakes are my own!)  Thanks again, Jody! 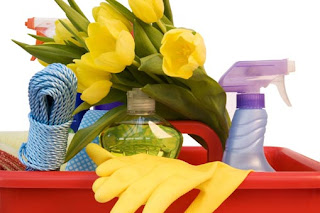 Email ThisBlogThis!Share to TwitterShare to FacebookShare to Pinterest
Labels: Blogging and the Blogosphere, The Monthly Theme 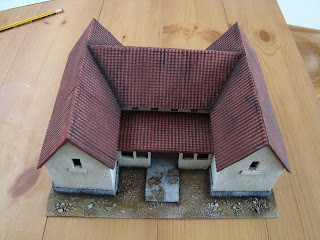 Cynewulf the Life-Ward and the Fight at the Ford

By the light of the guttering fire I can still see his face, flecked with blood and the exhaustion of the battle. I was silent while he spoke to me throughout much of the night. I shall remember his story to tell to my son, as my Father, Cynewulf of the Grey Shore, has told it to me.


“By the end of the fourth day, my Lord Cyddic had completed the rape of the land around the Town the British call Verulamium. My throat was hoarse from the smoke of a hundred farms and I was sick of fighting. We’d taken their cattle as easily as we had taken their lives. All that remains was to cross the Colne and bring their cattle and treasure home. 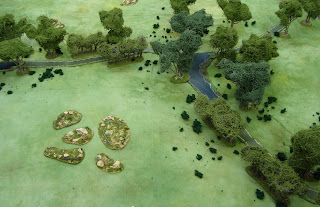 “I went with the Henga, the other life-ward to Lord Cyddic, to a route to the farmland we now call home. The Colne was fast flowing from rain and had a black glow which signalled to me it would be hard to cross. Henga and I spent a time looking, wading, trying to find a ford, searching the muddy ground of the bank for the tracks of the British cattle’s usual crossing. 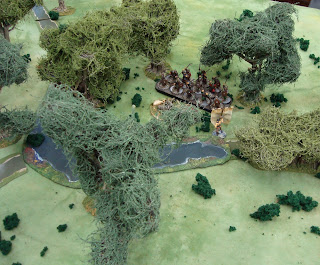 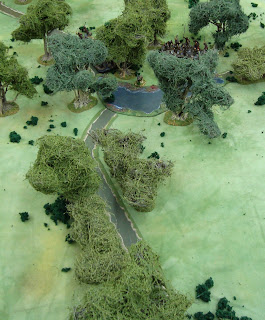 “My Lord Cyddic came and joined me. He was confident we could cross by the linden wood to the west, but I thought it an evil place. The banks were slick and wet. The crossing would be to a narrow place on the far side. I showed him the water – deep, black, fast. I warned him that our enemy was nearby and chasing us hard to take their cattle, their treasure and their pride back. 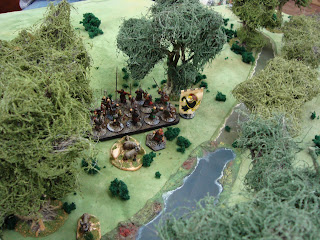 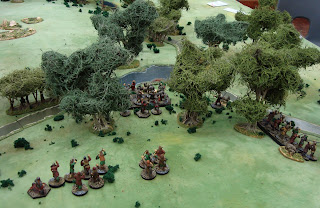 “He laughed hard, his voice like a rasp of steel. He chided me for being too cautious, saying that was the way of a life-ward – his closest warrior sworn to protect a Lord with his own life. He smiled at me, bidding me join him first on the far bank.


“Ravens curse me that I did not stop him then.

Rich, Biff, Nick, Elton, Joe and myself made the annual trip from St Albans down to Salute yesterday for the UK’s biggest wargames show at the Excel Centre in East London. Just about everything you could want for wargaming is, for one day, located in one place – including old and new friends from far and wide across the UK and the World. Owing to some administrative problem, TooFatLardies didn’t have a table this year for the show. This was bad news as I’ve enjoyed the participation games which we’ve staged at Salute in the past, but good news as it allowed me time to look around the show and (ahem ... cough ...) get de-railed into The Fox public house at an embarrassingly early stage in the day’s proceedings with aforementioned friends. More of that later …

The journey to a show is a big part of the day, and London Transport did us proud with a hassle-free journey. For those ladies in London “Looking for Mr. Right”, look no further than the two gentlemen – Big Rich and Biffo – under the perfectly placed sign on the Circle Line tube ... 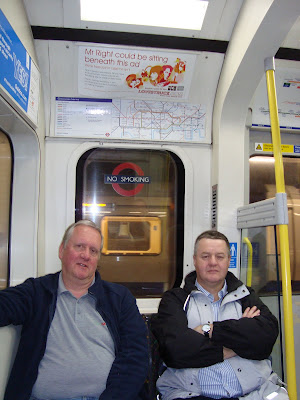 The show itself was pretty busy when we arrived, so we drifted off for a coffee first before joining the (reasonably) fast cue to get in. The morning seemed particularly busy, both games and trade stands in full flow. I spent a couple of hours in the morning looking around, and here’s my highlights from the games on show. All of them were excellent, and very welcoming and a pleasure to watch and photograph.

Base sizes and types

Perhaps like all bloggers, reading the comments on my blog are one of the real pleasures of blogging in the first place. It's good to know people - yes, that's you dear readers - have enjoyed something posted on the blog. But more than that it's a great way for blog readers to ask questions of the blogger. Curt, from the excellent Analogue Hobbies blog, posted one about base sizes last week (thank you, Curt!). 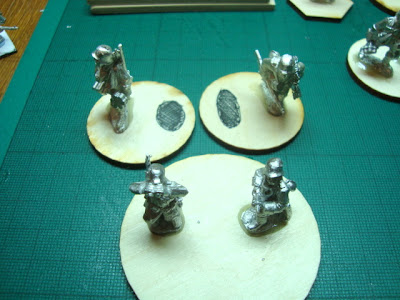 I was going to just reply in the comments thread, but as I typed the reply it grew ... and grew. So I thought it might be helpful to add it as a new Blog post - which is my 100th post on the Blog.

So, here's my guide to the figure bases I use, their sizes and why I use them.

Great War Snipers – or how not to be seen

Here’s a few snipers from the Great War I’ve worked on this week. I’ve painted a few snipers before and I’ve always found them an interesting subject. It gives a painter the chance to experiment a little more than you get with painting the more familiar uniforms of British and German front line troops. 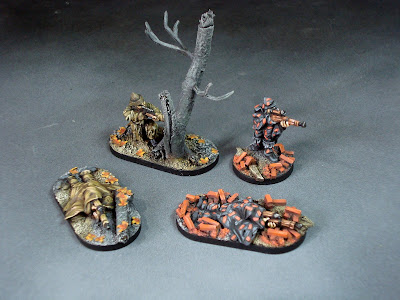 The first figure is from Great War Miniatures – the British sniper by the tree – with the other three being from 1st Corps miniatures – the other standing and two prone snipers. I enjoyed painting them all. There were each finely cast and take paint very well. I particularly like the prone snipers, and I would say that they’d be perfect for a lot more than just the Western Front in the First World War (which is the range their sold in by 1st Corps). 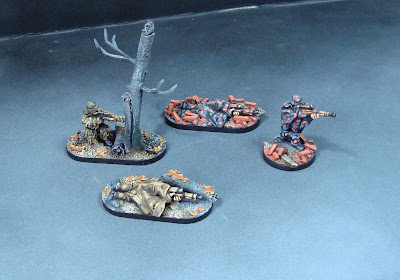 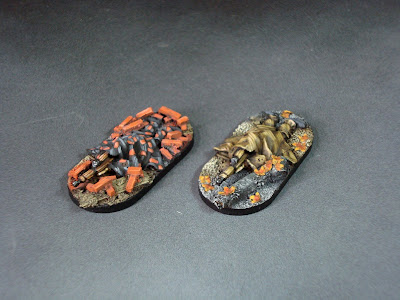 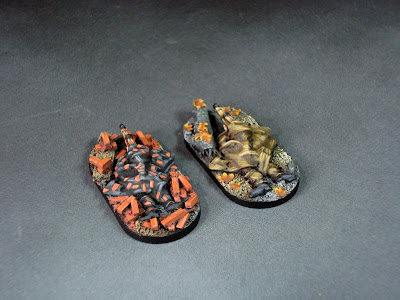 As for the camouflage, the Great War saw some real innovations in this area. Accordingly to “Sniping in the Great War” by Martin Pegler (at page 131) the ghillie suit, worn by the Lovat Scouts, was one of these: “Sewn onto it were lengths of green, brown or black cloth, as well as loops into which local flora would be tucked, suitably blurring the outline of the human body. It had a hood that could be pulled up to cover the forehead, and properly used could make a man invisible to a skilled observer at 10 yards”. As the War progressed, snipers made their own camouflage from whatever was available: “muslin, wire gauze, coats, gloves, veils, bandages for rifles, periscopes etc...masks...may be useful. An ordinary sandbag over the head, with the strands pulled apart...for the eyes is often the simplest and best disguise”. (“Sniping in the Great War”, page 141).

I tried to set the British snipers in a wooded environment, crouching among the shattered stumps and fallen branches. 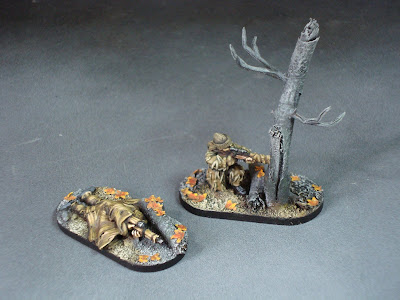 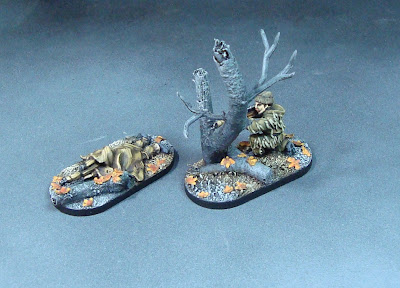 Turning to the German snipers, I wanted to set these in a built up environment such as a ruined village or a particular battlefield such as the infamous “brickstacks” around Cuinchy (the site of a former brickworks, marked by numerous solid and sturdy stacks of bricks varying in height up to around 18 feet and held by the Germans in 1915 and 1916). In the early stages of the War, German snipers had a distinct upper-hand. With unfettered access to high quality telescopic sights through their optics and precision manufacturing infantry, the German Army was also quick to field snipers along the whole of their front line. Few British officers in 1914 were fully aware of the need to provide adequate protection against sniper fire: “October 1914: C Company was also under inescapable enfilade from Rouges Bancs, which was only 350 yards away…for most of the deaths were from rifle fire, shells caused comparatively few.” (“Sniping in the Great War”, page 49)

So, here’s the two snipers, painted in camouflage aimed to conceal then among shattered walls and buildings. As the British used netting and canvas covers replicating ruined buildings and fallen bricks, I couldn’t see why the Germans would not have had access to the same sort of camouflage. 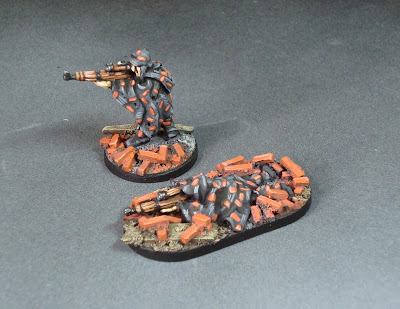 Next up, I’ve some British sentries, German trench raiders and terrain over the Easter holidays, together with a few other posts I’ve been saving for a while. Until then, Happy Easter!