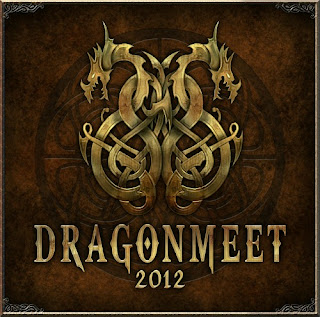 After the fiasco of not getting to Crisis 2012 in Antwerp earlier this year, I’m relieved to say that there doesn’t seem to be anything to stop me and my great chum from the Humberside Wargames Club, Mike Brown, getting to the Kensington Town Hall tomorrow where the show is taking place.  No hurricanes, no landslips, no floods (so far  – I’ve just checked), no new work project to keep me chained to a desk, and hopefully no train hijacking on the way to the show tomorrow morning to delay me.


It’s been a few years since I last made it to Dragonmeet.  My memory is that it’s a cracking show, with a great line up of speakers, participation games and traders.  It’s a chance for me to pick up a few RPGs which I’ve had my eye on for a while.  Officially, I’m excited.


I’ve still been working hard on the Stosstruppen articles I mentioned before (yes, they’re almost finished, although I’m still stuck on a couple of aspects), so making an evolution for the day into a world of roleplaying is going to be a great tonic.


I’m looking forward to meeting up with some old friends on the day, and if you’re going as well, I’ll hopefully catch you there!


And I’ll hopefully also let you all have a full report early next week.
Posted by Sidney Roundwood at 23:10 12 comments:

Have you ever had the feeling that you’re juggling one too many things at the same time?  A little like one of those plate spinners who used to be a staple of 1970s television on a Saturday night?  I confess that I feel a little like that right now.  I don’t think it’s a question of being a wargames “butterfly” – a very apt expression – but just someone who’s just not managed to finish everything they’ve started.

So, what exactly is on the painting table and terrain bench right now? 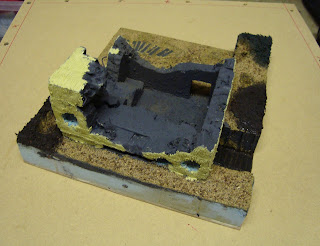 First up is the destroyed version of das Rattenloch which is currently on the terrain bench.  You might remember the large bunker I built in the early months of this summer, based on and inspired by Phil Robinson’s excellent Rattenkeller model.  I’d long planned the bunker itself as being a removable terrain piece, which could be replaced by a destroyed version. 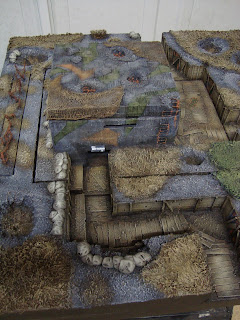 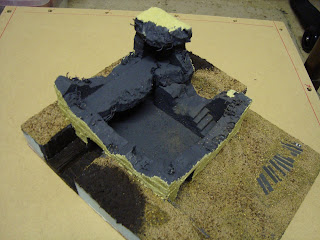 One of the real pleasures of  the blogosphere is the sheer number of terrific wargaming ideas people come up with and blog about.  Every so often someone comes up with something which is just incredible.  I’ve occassionally re-blogged these, or linked through to them, in the past and I’d like to mention another one here. 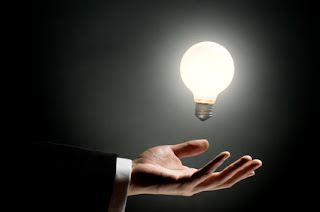 This one is just a wonderfully simple idea by Black Cavalier for “terrain blinds”.  As described by him on his blog, Two Tharks One Cup : “They are nondescript terrain place-holders that allowed me to show the players that something is in that area of the board but that their figures can’t tell what it was until they got closer”. 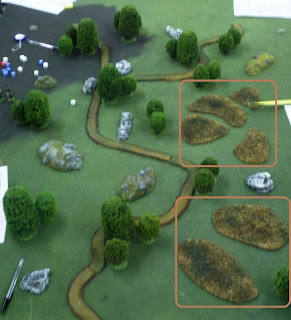 It’s an idea with loads of uses, in all different gaming rules at all scales.  It fits the rules I really enjoy for the Great War, TooFatLardies’ “Through the Mud and the Blood” perfectly.  But it’s also perfectly easy to build into a game of Warhammer "Great War", or Iron Ivan Games' "The Price of Glory", or countless other rules in different periods.

I've tried experimenting with different inserts in modular terrain before.  You might remember the prepared 7.7mmFeldkanone 96 n.a. position I built last year, and which British Great War tank commanders found so difficult to spot until almost at point-blank range. 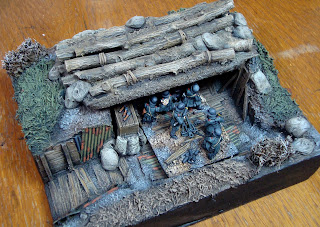 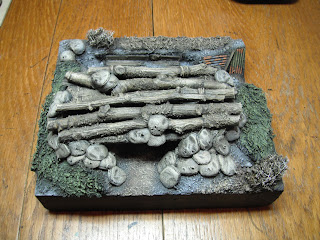 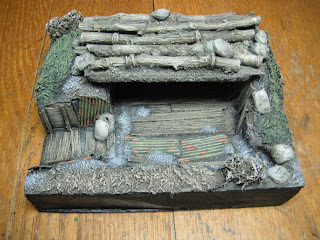 But I’ve not done the same with terrain which can be placed in a variety of positions on the tabletop, which is the very flexible idea proposed in Black Cavalier’s post.  I hope to correct that shortly, following his terrain blinds idea.  Where great idea go, it always fun to follow and see where you end up!

One great idea.  Hundreds of uses.  Simple but fun and realistic.  It doesn't get better than that!


The occasion of Remembrance Day often brings out some fine documentaries on television.  While I am generally not a great watcher of television, sometimes I find a programme in the TV schedules which is worth the cost of the UK license fee in itself.

Tucked away on More 4 this weekend was a very fine documentary entitled “War Horse: The Real Story”.  It was a poignant, moving and very well researched documentary about the work, and death, of horses on the Western Front in the Great War. 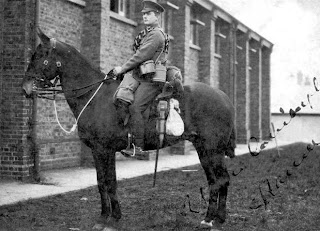 The documentary is available on Channel 4’s “on demand” service, 4OD, at the present time for free.  I don’t know whether this on demand service extends to residents outside the UK. (I anticipate that, owing to the UK television licensing, it may well not so – which is a great shame).

The programme charts the purchase, training, use, care and deaths of horses in war and battle on the Western Front, giving some incredible statistics for the sheer number of horses which died and suffered in the conflict. All of this is conveyed in a very professional, thoughtful and informed manner.  There is a clear acknowledgement of how traumatic the war was for horses in conflict.  There are many images of the care and concern which men gave to their horses. And there is also a clear recognition in the programme of the invaluable contribution of horses to British and Imperial forces in the Great War.  The indispensable service of the British and Imperial cavalry in the “Hundred Days” campaign in the late summer and autumn of 1918 is well covered. 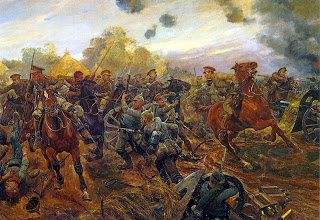 
In Flanders fields the poppies blow

Between the crosses, row on row,

That mark our place; and in the sky

Scarce heard amid the guns below.

We are the dead. Short days ago

Loved and were loved and now we lie

Take up the quarrel with the foe,

To you from failing hands we throw

The torch; be yours to hold it high.

If ye break faith with us who die

We shall not sleep, though poppies grow

Email ThisBlogThis!Share to TwitterShare to FacebookShare to Pinterest
Labels: Remembrance


It was a simple plan.  I’d been before to the Crisis show in Antwerp. The hotel was booked.  A car-parking space at the hotel was booked.  The restaurant was booked.  The figures and terrain were finished.  I was fit and healthy.  My passport was valid and my E111 in date.  I had blogged that I was heading to Antwerp last Friday and kind souls like those reading this post had responded – I was welcome.  Life was good. What could possibly go wrong? 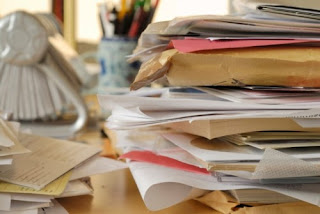 I got a call from a client last Thursday lunchtime.  They needed something.  No, it really couldn't wait. Yes it would be finished by … Monday.  Yes, there were meetings involved and when was I coming to their offices to help sort it all out?

So much for my "simple plan", wrecked by having to work this weekend while my other chums from the St Albans Wargames Club had a fantastic time in Antwerp.

To everyone who I told I was coming – many, many apologies.  I mention that not because meeting me is in any way exciting (it really isn't!), but just because I hate saying I’ll do something and then not being able to do it.  And this is the second time in a month that it’s happened, the first with getting the ‘flu.  I am beginning to wonder if Lady Luck has deserted me this Autumn.

My next planned outing is with my great chum Mike to Dragonmeet 2012 in December.  I am expecting a hurricane or impenetrable snowstorm to descend in the vicinity of St Albans just in time to prevent me getting to Kensington Town Hall for the event.  I hope not, and I'm only an amateur weather forecaster, but you have been warned...!

Away from simple plans to a great blogpost from the wonderful blog of Phil Broeders.  He posted a super post yesterday “Are you a proper wargamer”.  I’ve seen a few bloggers rising to the challenge, and Big Lee even devised a points system for his response (simple to spot the army list builder there, Lee!!).

Yes.  About £500 a year, all told, including paints, brushes, terrain materials and whatnot on the hobby.  This seems an awful lot, but I rationalise it by thinking that its about £10 a week on the hobby I love.  I’m sure there’s worse things I can spend £10 on.

* Tried at least 10 different rule sets and vowed never to play half of them ever again
Yes.  There must be dozens of copies of rules hanging around my house, supplemented my own home-brewed attempts (mostly rubbish) that I've tried to concoct over the years.

* Bought an army off EBay
No, although I've purchased figures on Ebay from time to time.

* Sold an army on EBay
No.  I've not sold any figures that I can think of.  Given quite a few away (and been given them), but not sold any.  And yes, the garden shed does stand on reinforced concrete to stop it’s leaden contents sinking into the Hertfordshire soil.

* spent months painting an army - then used it in anger once
Ah Phil, you must be thinking of my 28mm Japanese Samurai army from the Sengoku period.  Not quite used once, but certainly less times than I’d like to have used it.  One day, mes braves, one day …

* tried several different periods and genres
Oh yes.  Just about every period imaginable has seen my ham-fisted attempts at generalship over the years.

* dropped a box of figures on the floor from a great height
Not that I can recall.

* lost a battle on the last throw of the dice
Yes, a few times.  But defeat usually steals into my camp far, far earlier than that. 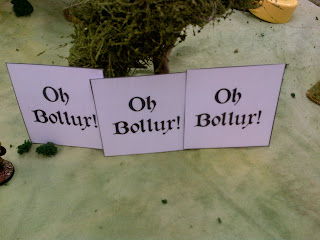 * made at least one enemy for life
No.  I’d be heartbroken and mortified if I had done.

* had a proper, stand up argument over a wargamers' table
No.  I can’t think of any.  You tend not to get into arguments when you’re not that bothered about winning.

* thrown a dice across a room
Almost every week.  It is a standing joke at the St Albans club that I'm nearly incapable of throwing the dice on the table.  I have acquired my own dice box to roll without scattering the dice like shrapnel everywhere. It nerves.  Knowing you're going to roll a double 1 is a terrible thing, friends.

* rebased an army for a different rule set
Yes.  Ah, WRG 2nd Edition Renaissance rules, how I do miss you...
.
* inflicted a whopping defeat on an opponent
Only accidentally or through sheer happenstance.

* suffered an embarrassing defeat due to a stupid tactical decision
Usually a weekly event about 9.30pm every Tuesday (bank holidays excluded) at the St Albans Wargames Club and at every TooFatLardies Games Day yet.  “Run Forrest Run…”

* joined a wargamers club
Yes.  Three clubs – Wolfreton School, Humberside and St Albans – in 31 years.  By far the best things I have ever done in the hobby, giving me a lifetime of wonderful friends. 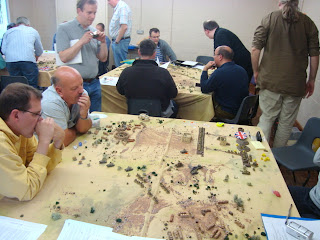 * bought a ton of lead that remains unpainted
Maybe not a ton.  But my lovely wife will tell you otherwise.

* have more dice than is logical or necessary to own - and have used most of them
Yes.  It’s an addiction.

* have taken boxes of troops down to a club just to show them off to your mates
Yes.  Usually to try and entice clubmates into some new period or to persuade them that even though I am the world’s worst wargamer as regards tactics, I do still have some uses.  Lord only knows what they'll say to me once 3D colour printing arrives, though... 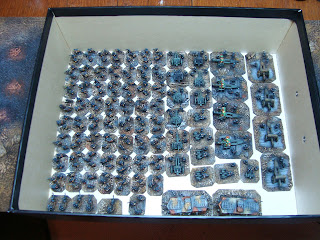 Thanks again to Phil for a great set of questions!