Well, it’s January, it’s cold and it’s the time of year that you persuade to yourself that you need to make a real effort to do all the things you said you’d do last year. I had a few this year, but one of them was to post a blog about one or two of the terrain projects which I worked on last year for the TooFatLardies display games of “Through the Mud and the Blood”.

Over the last year, a few people have asked me how we went about building an 8 foot x 8 foot set of terrain boards featuring wargaming terrain from the Western Front in the Great War. Richard Clarke kindly asked me to add an article on the terrain to the TFL Summer Special all about the construction of the boards. As articles in magazines go, I was pretty happy about it, but not everyone has a copy and, well, there’s only so much you can put into an article.

So, to try and spread the word about how we went about building the terrain, here’s a blog which sets out my terrain constructing entertainment from 2009, and brings people right up to date with my plans for 2010.

“Every journey starts with a first step”

Thinking back, I don’t quite know how it happened. In the space of a few short hours in November 2008, I had arrived at the St Albans wargames club at the Fleetville Community Centre for a light-hearted game of “Bag the Hun” and ended up with a new project. Well, that’ll teach me to make a cup of coffee in the kitchen when someone’s looking for volunteers. The project seemed pretty simple when I agreed to it. Richard Clarke wanted to have a crack at producing some trench terrain for his new World War One rules, “Through the Mud and the Blood”. How hard could that be? Piece of cake, surely? I’d made plenty of terrain before and that hadn’t taken too long. I’d even made a set of terrain boards for the TFL game at Salute in 2005, and that’d been simplicity itself.

Trenches? ....no problem. World War One?.....Well, not really something I knew much about, but how complicated could it be? 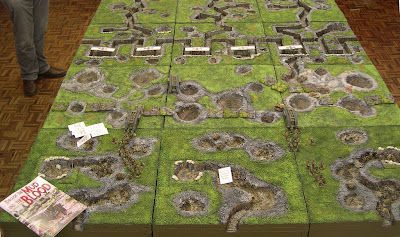 Posted by Sidney Roundwood at 09:18 No comments: