African Autumn: "...and you bought HOW many Tirailleurs...?"

And then there are the - thankfully fairly rare - days like today.  The day when some of the exciting feeling of a new project disappears like the early morning mist on the Veldt.  The day when you actually count up how many figures need painting...and converting.   The day when reality makes first contact with your dreams!

Oops.  That's the day you look at the little metal figures and shake your head.  Sometimes laughing in disbelief.  Sometimes softly, trying to convince yourself this was a good idea.  And you slowly recount the figures.  No, surely there can't have been that many.  I must have miscounted.  No...I counted right the first time.  Oooops.

Yes, mes braves, its time to show you The Box. 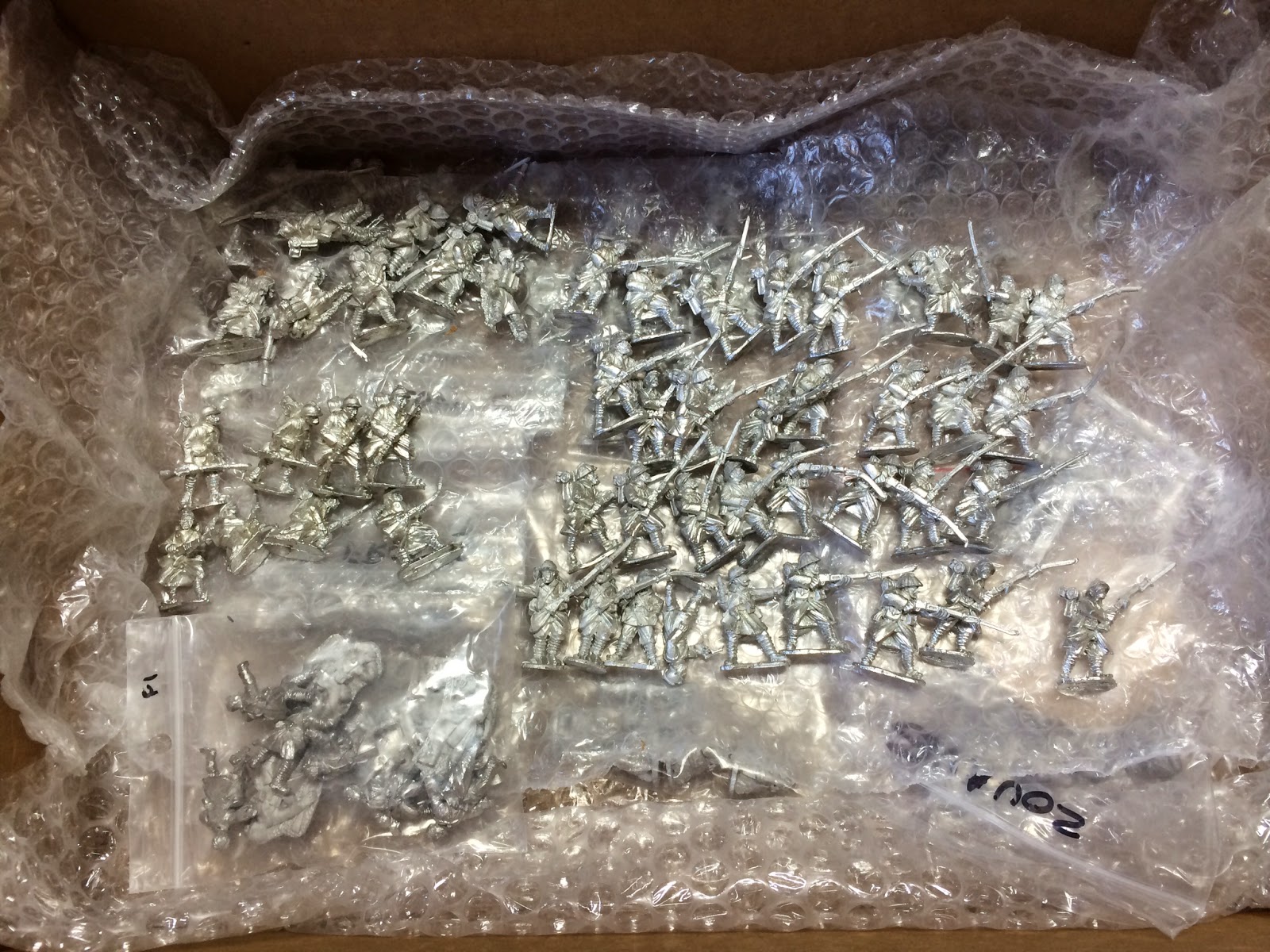 Well, they they are.  Les Tirailleurs Senegalais.  Oh, and there's another layer below them of more Tirailleurs and French Legion Entranger.  And some machine guns.  And some casualties.  And some other stuff I don't need to trouble you with right now.... And some spare heads....actually, rather a lot of spare heads.

I know what you're thinking.  That's quite a few figures to convert ... and that really is a lot of heads to swap.... 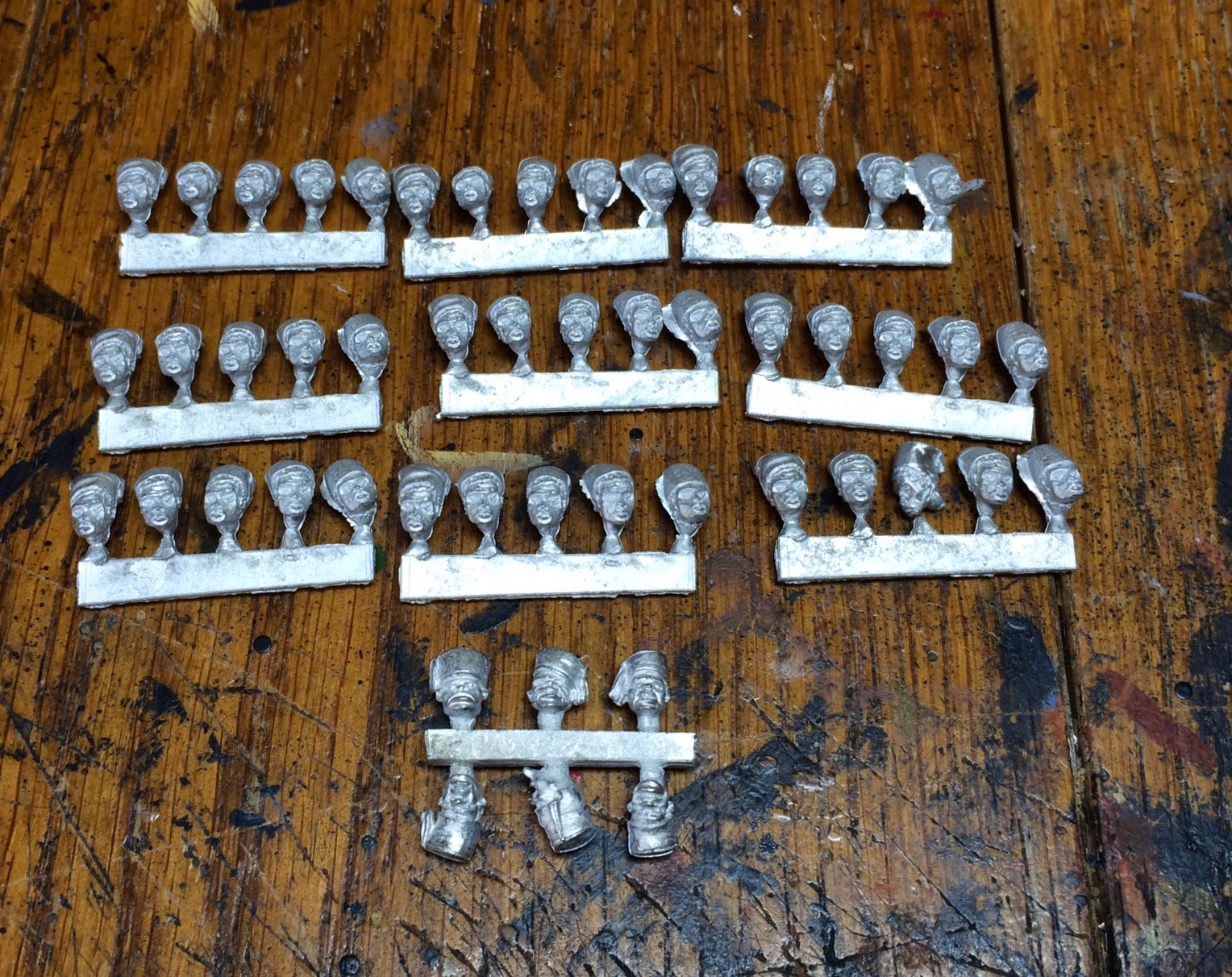 It's been a slightly subdued morning in the painting room after I realised how much I had to do and just how small those lovely Woodbine Design Company heads are.

But every journey starts with a first step.  I've selected the first nineteen figures for preparation, conversion and basing.  I've chosen figures which are similar enough to give me a feel for how to manage the conversions over a larger group, but varied enough so I don't get bored.  And, because I keep convincing myself I enjoy a challenge, I've included a company command base in the first batch as well (with some Forgotten & Glorious Tirailleur heads).

And yes, that is a lot of modelling putty in the photograph below.  Sadly, perhaps even depressingly, no enterprising figure manufacturer has yet cast anything I can use for a coupe-coupe machete to be glued onto the belt of the figures.  Ahh....so that's what the modelling putty is for... 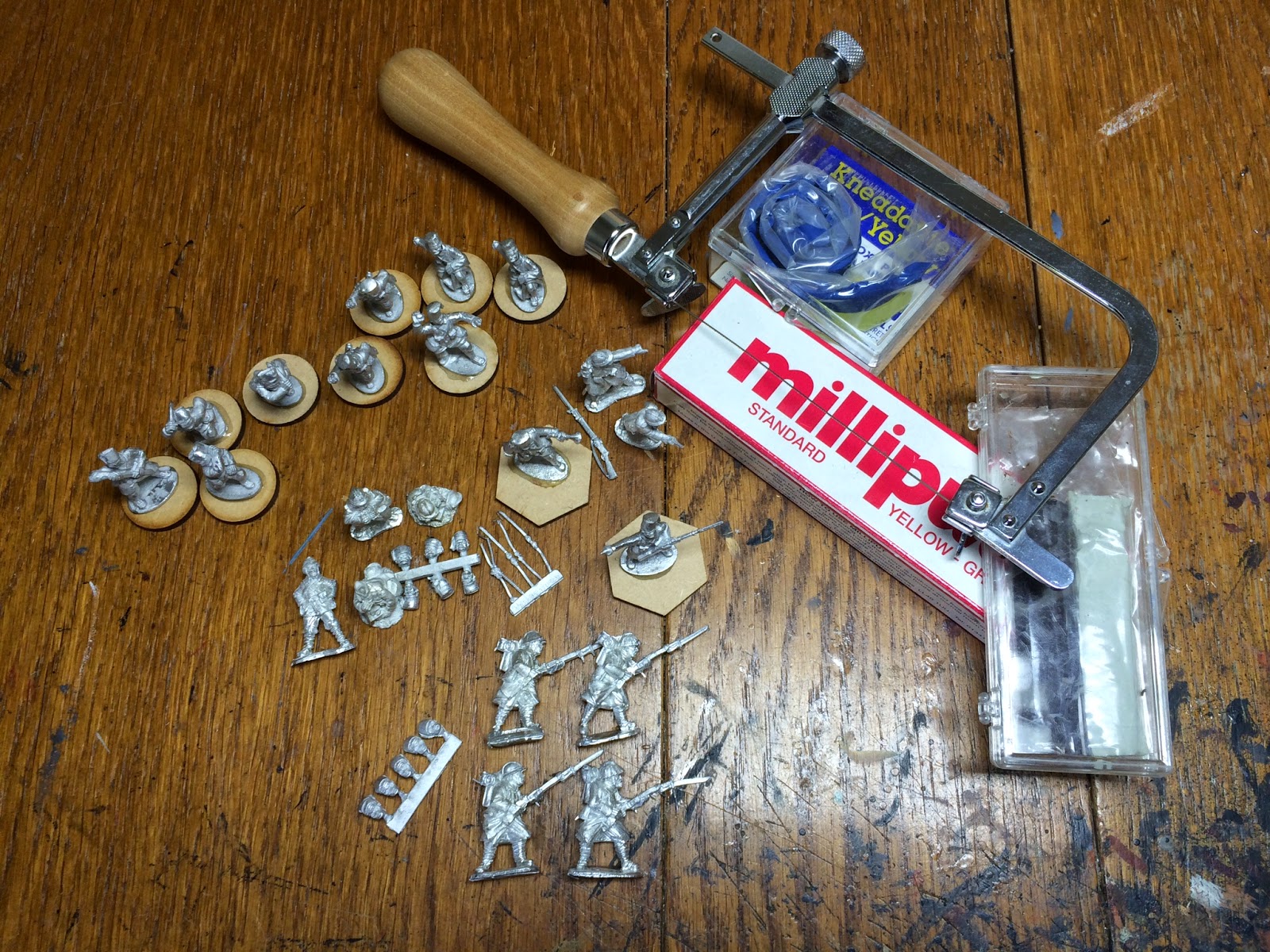 All done by December?  What are the chances?  Ninety 28mm figures (including the Legion Etranger), in three months.  To be honest, there's maybe be a slim chance of that happening.  Which is just enough of a chance to go for it!

And, although books about the Tirailleur Senegalais are a little thin on the ground, I've plenty of inspiration for wargaming in Africa from other sources - some eminently respectable, some a little more eccentric! 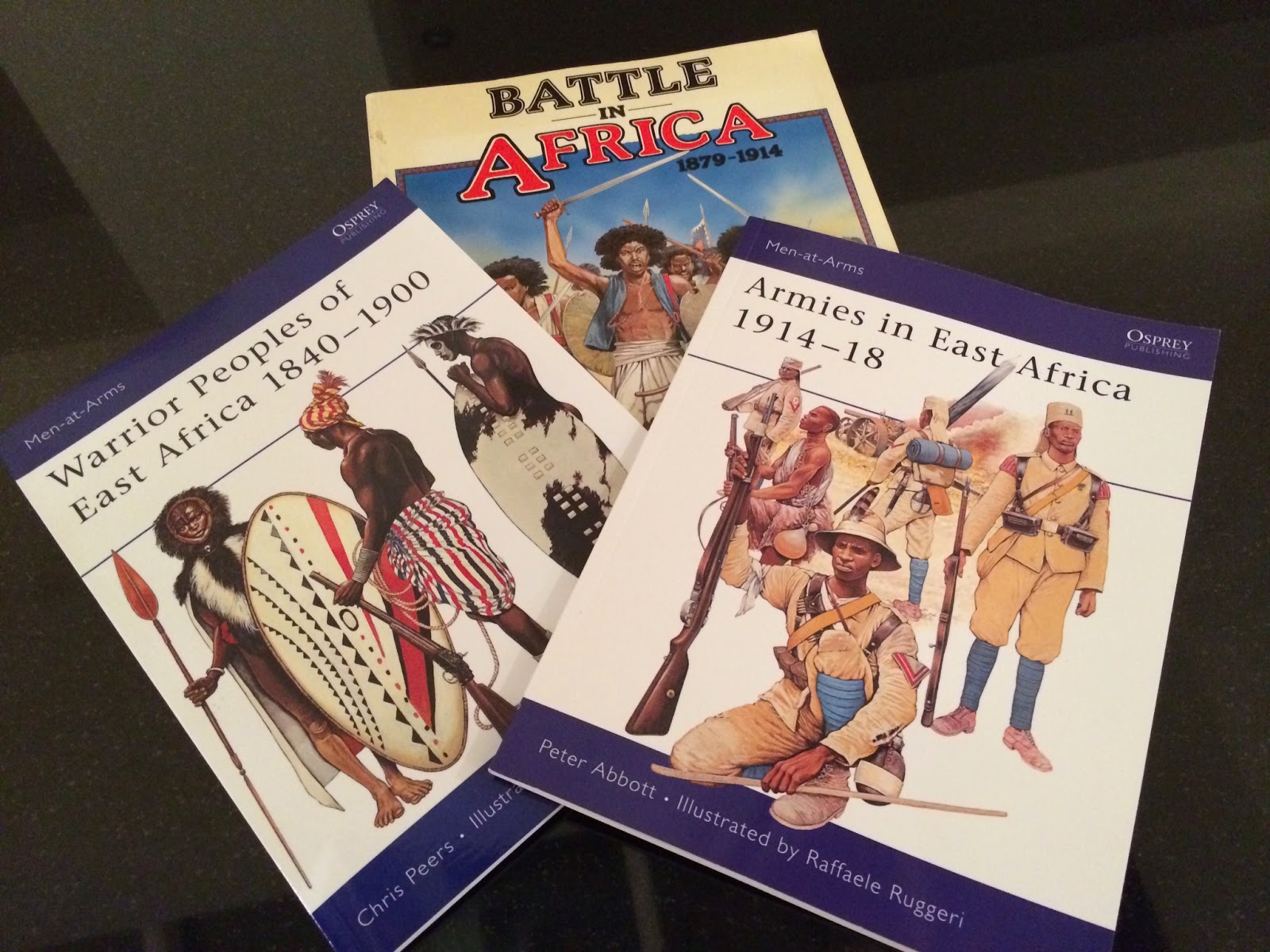 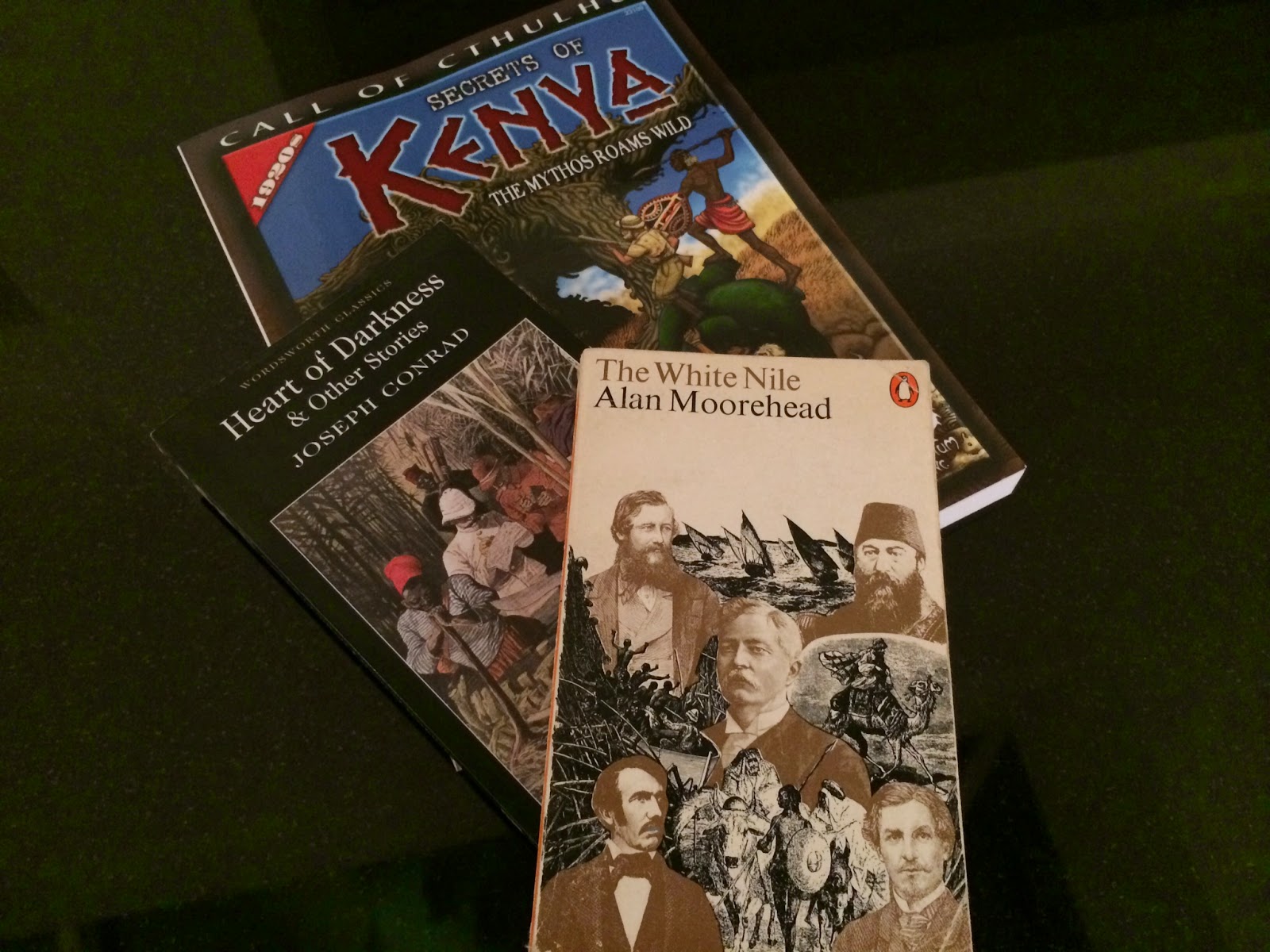 So, wish me luck.  I better get moving.  Those Adrien helmets won't swap themselves!

Email ThisBlogThis!Share to TwitterShare to FacebookShare to Pinterest
Labels: African Autumn, Painting and Modelling, Wargaming with the French, Work In Progress

Here's the final Poilu in Horizon Bleu for the Verdun Project.  They've taken a while to complete but they are, at last, completed. 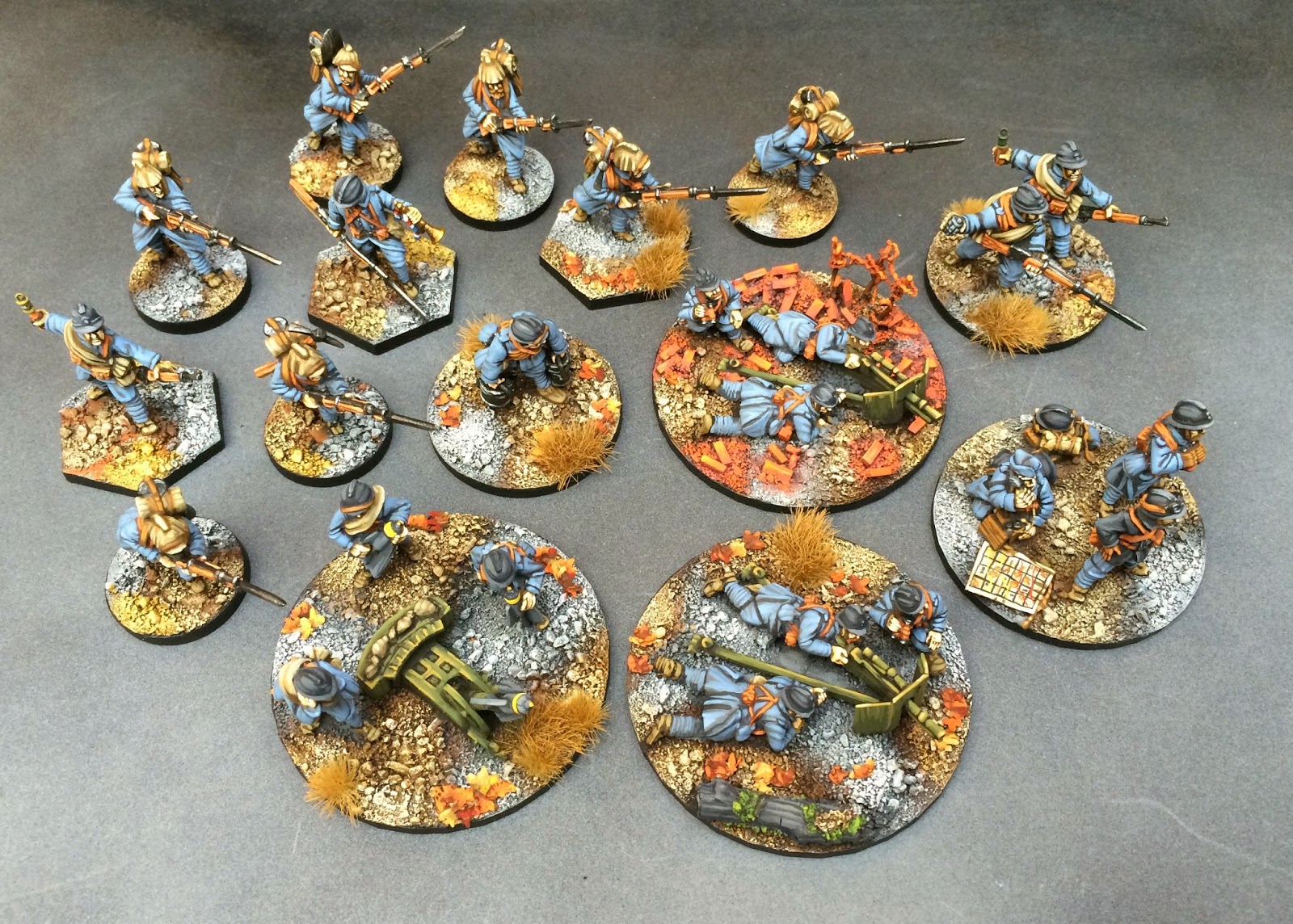 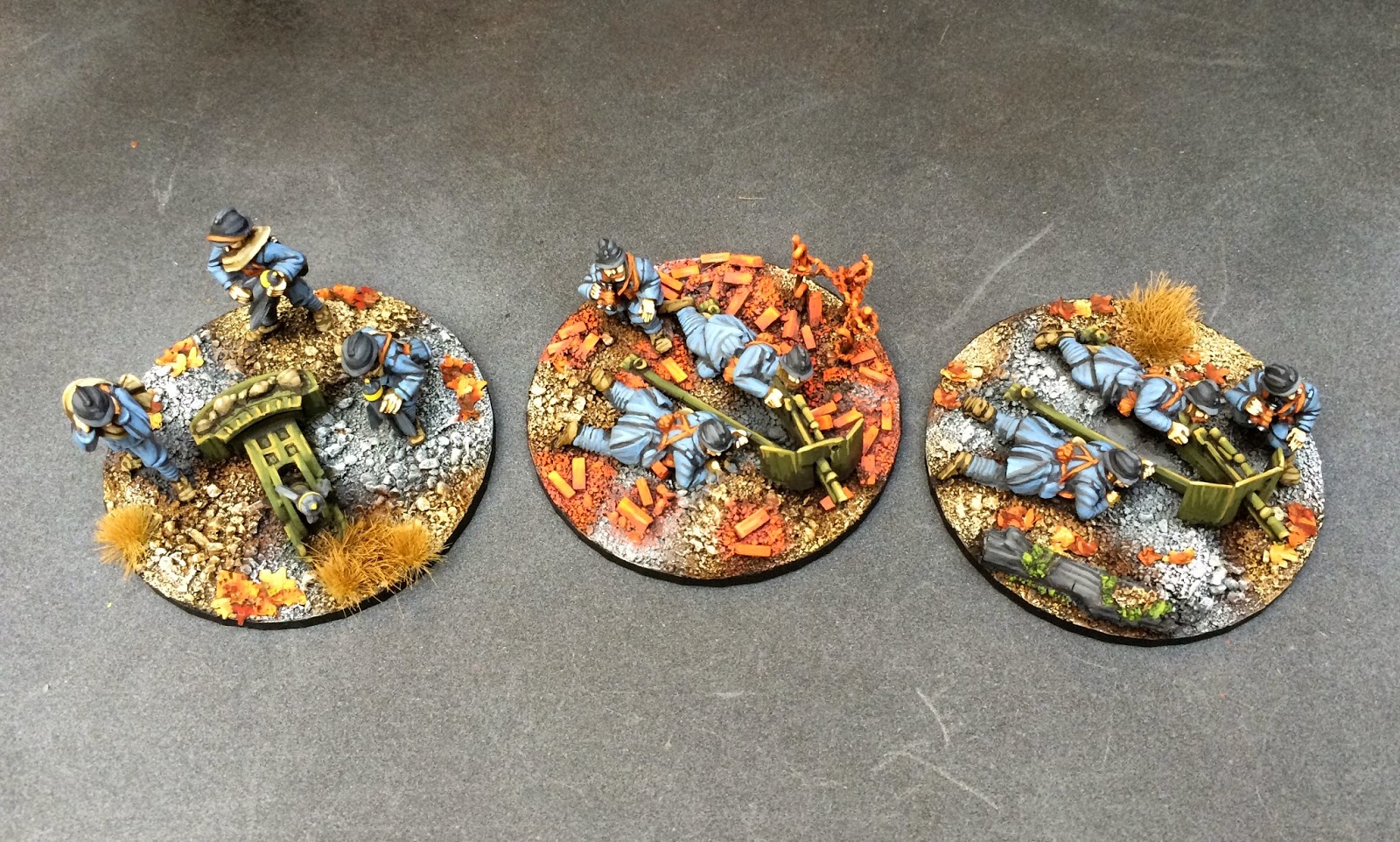 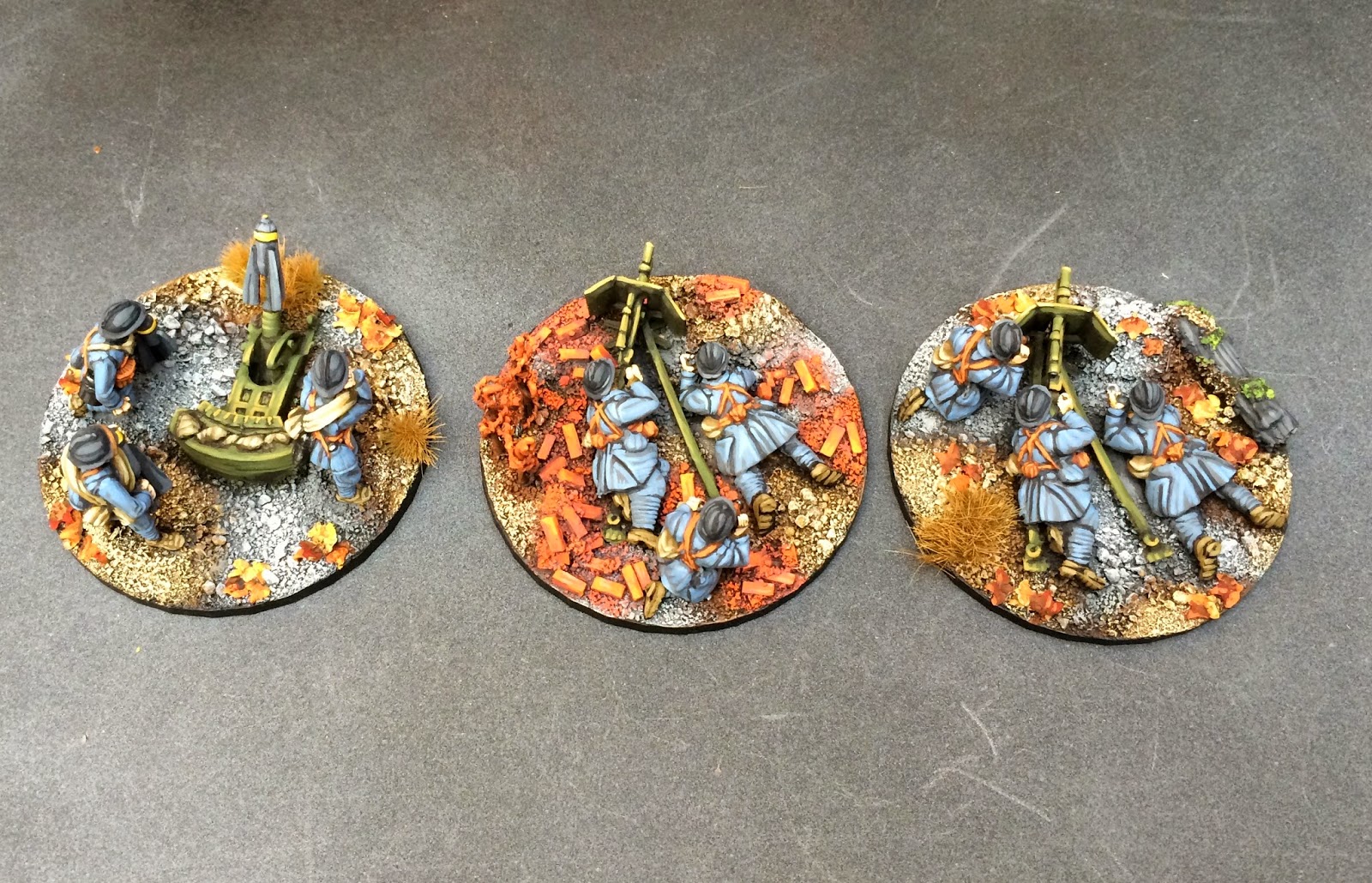 The figures are mainly Brigade Games miniatures from their late Great war French line.  The 37mm trench guns are from Old Glory, with a Forgotten & Glorious musician and Scarab field telephone operator added for good measure.  The Old Glory trench guns were worth persevering with and paint up very nicely - they should give the French assault formations some real force on the tabletop.

The company command group was a lot of fun to paint.  I'm currently toying with the idea of using a satin, or even gloss, varnish on the black leather jacket of Capitaine Moreau. 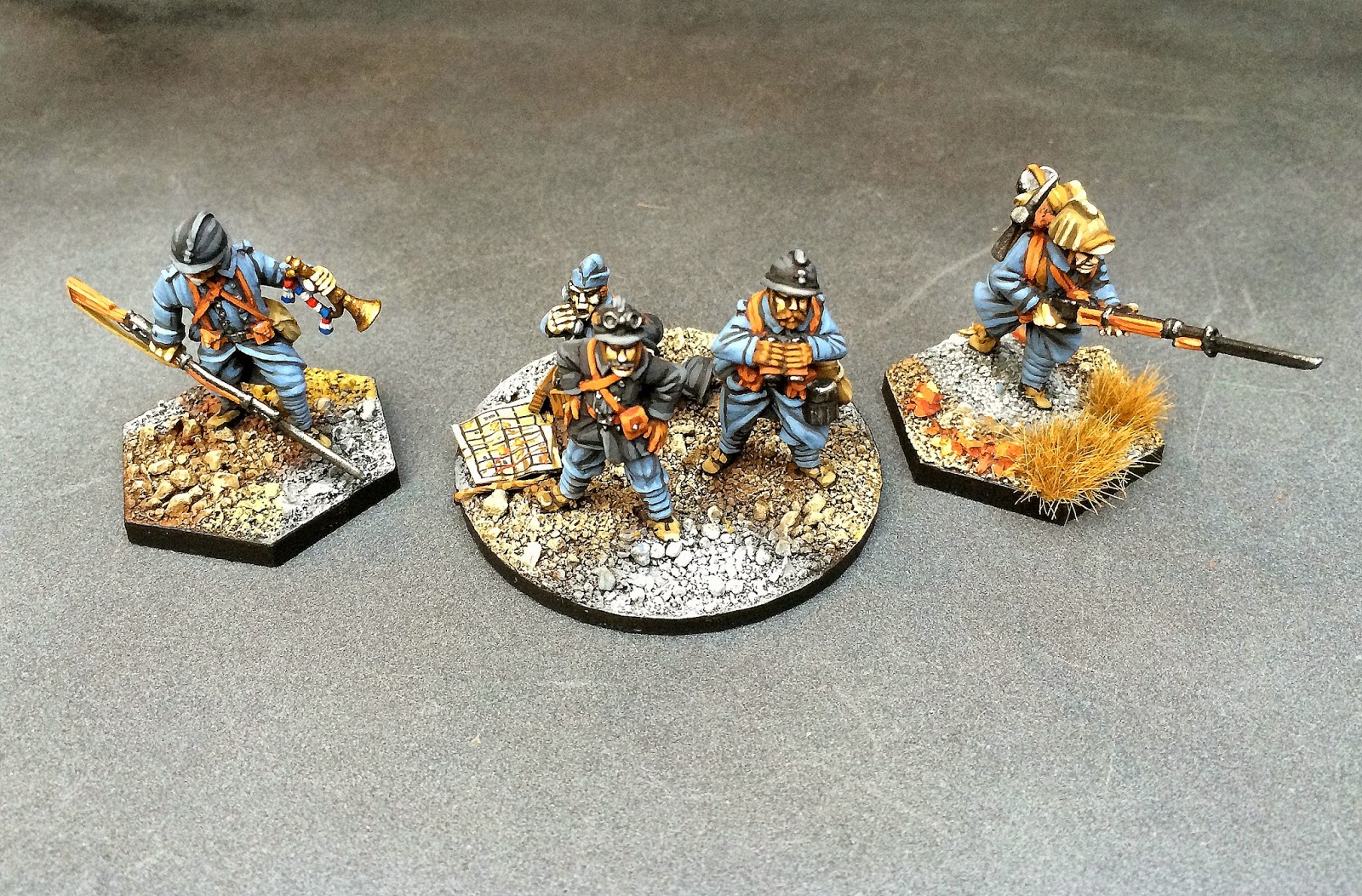 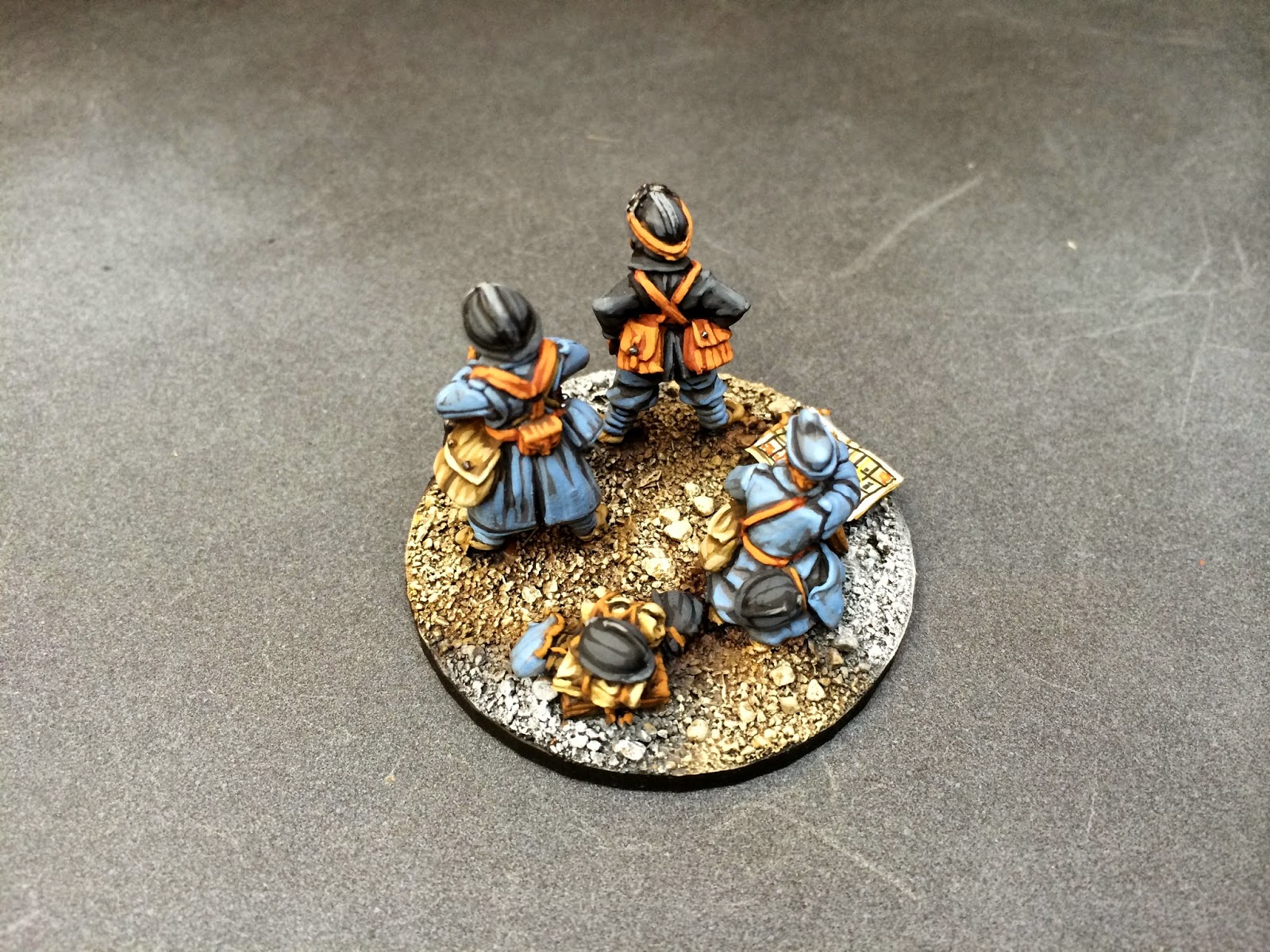 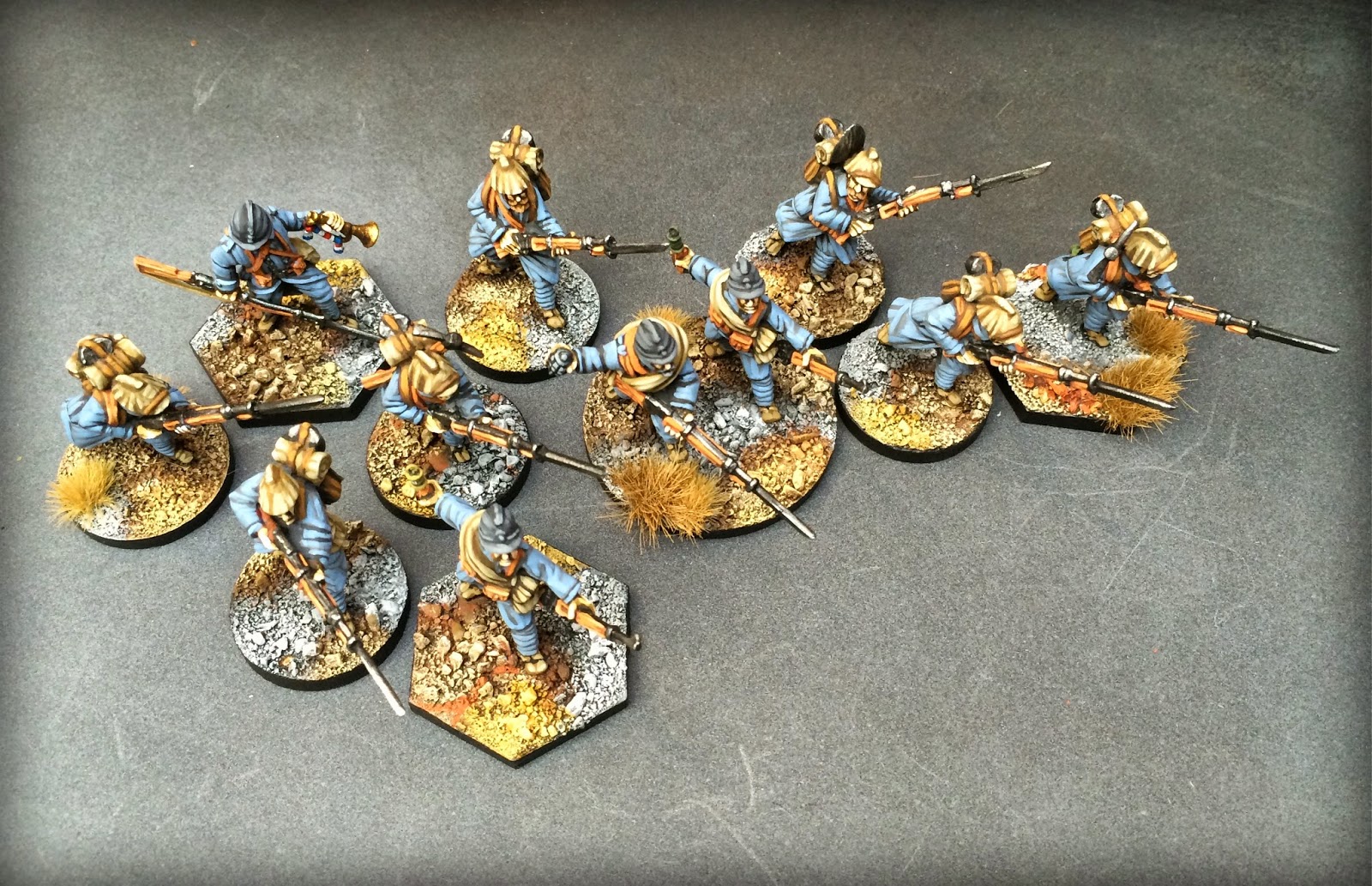 These are the first batch of figures where I’ve gone the full distance with ground texturing, adding grass tufts and leaves to a lot of the figures along with some barbed wire. I think the extra effort was worth it, and I’m going to be doing more of this in the future I hope.

So, after almost 18 months, I’m about ready to hang up my Horizon Bleu paint brushes and move on to the Tirailleurs Sénégalais. The figures, and their separate heads, have arrived in the post, I’ve a clean painting table, and have no more excuses.

Hopefully the next few posts will have a sense of exotic Africa about them!

Email ThisBlogThis!Share to TwitterShare to FacebookShare to Pinterest
Labels: Painting and Modelling, Verdun, Wargaming with the French


It’s been a busy week at Roundwood Towers. I’ve been busy preparing the first wave of Tirailleurs Sénégalais, and finishing off the last of the horizon bleu coated Metropolitan French infantry. I’ve posted a work in progress shot below of just about the the last of the Poilu. 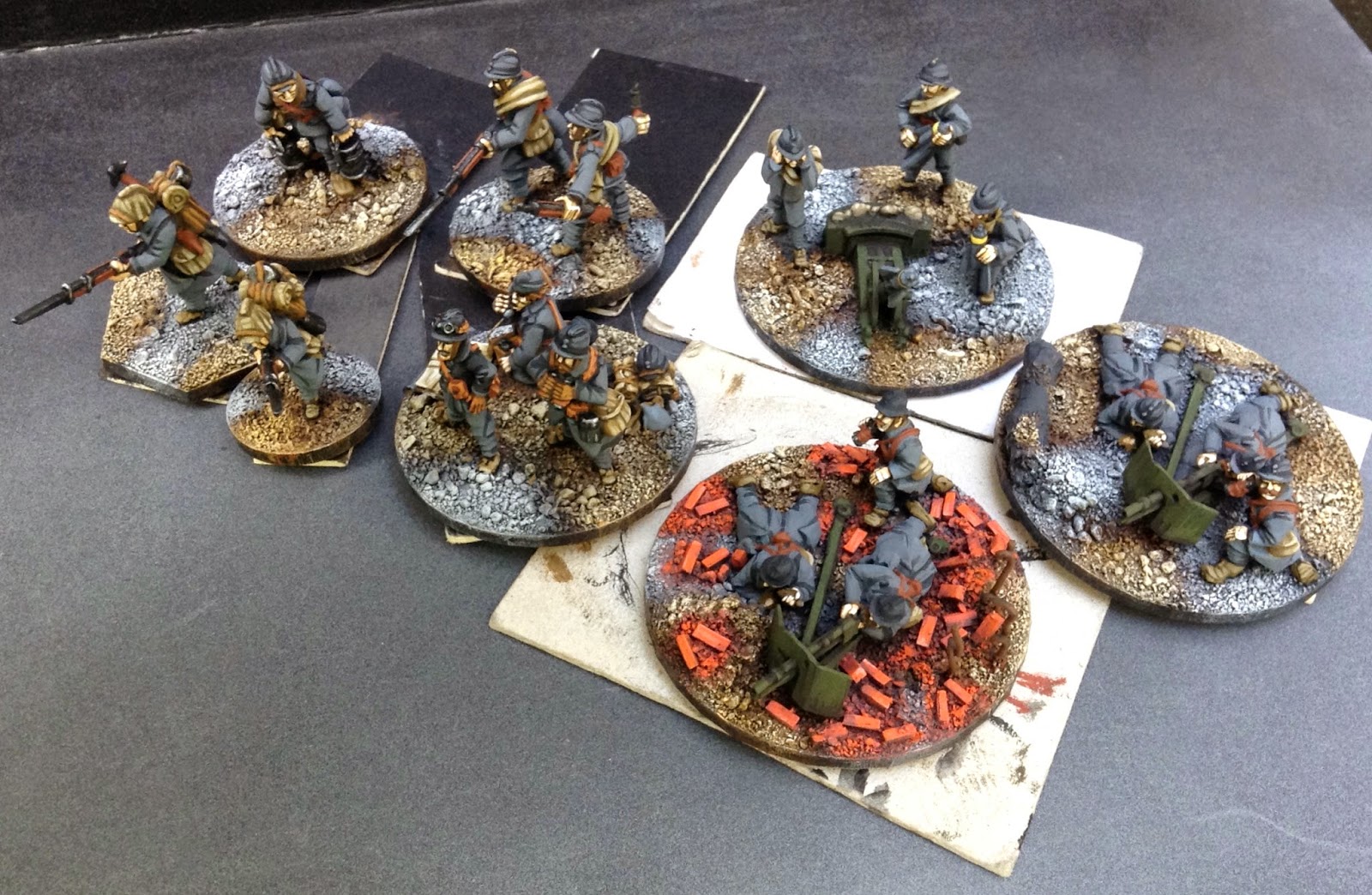 As you can see, there’s a small number of spare French infantry, a battalion command group (which somehow kept being missed from the painting queue), a couple of 37mm trench guns and another Crapouillot trench mortar. All the figures are 28mm, and come from a mixture of Brigade Games, Scarab Miniatures and Old Glory.

Readers of this blog will know my love of the Brigade Games late First World War French range, sculpted by Mike Owen. These figures are really splendid. I strongly recommend them. I’m also a fan of the Scarab Miniatures command ranges, including the kneeling field telephone operator in the command group. The late war French range from Old Glory doesn’t get as much love online as it might do. The figures are very slightly smaller than Brigade Games’ figures, and certainly do not have the heft and weight of Scarab figures. But they are well proportioned, and in small groups of figures (such as the 37mm trench guns above, or the Crapouillot trench mortars below) they look very fine. On the table top, on a shell-pocked terrain, they really fit perfectly with Brigade Games’ and Great War Miniatures’ French and German figures for the 1916-1918 period. 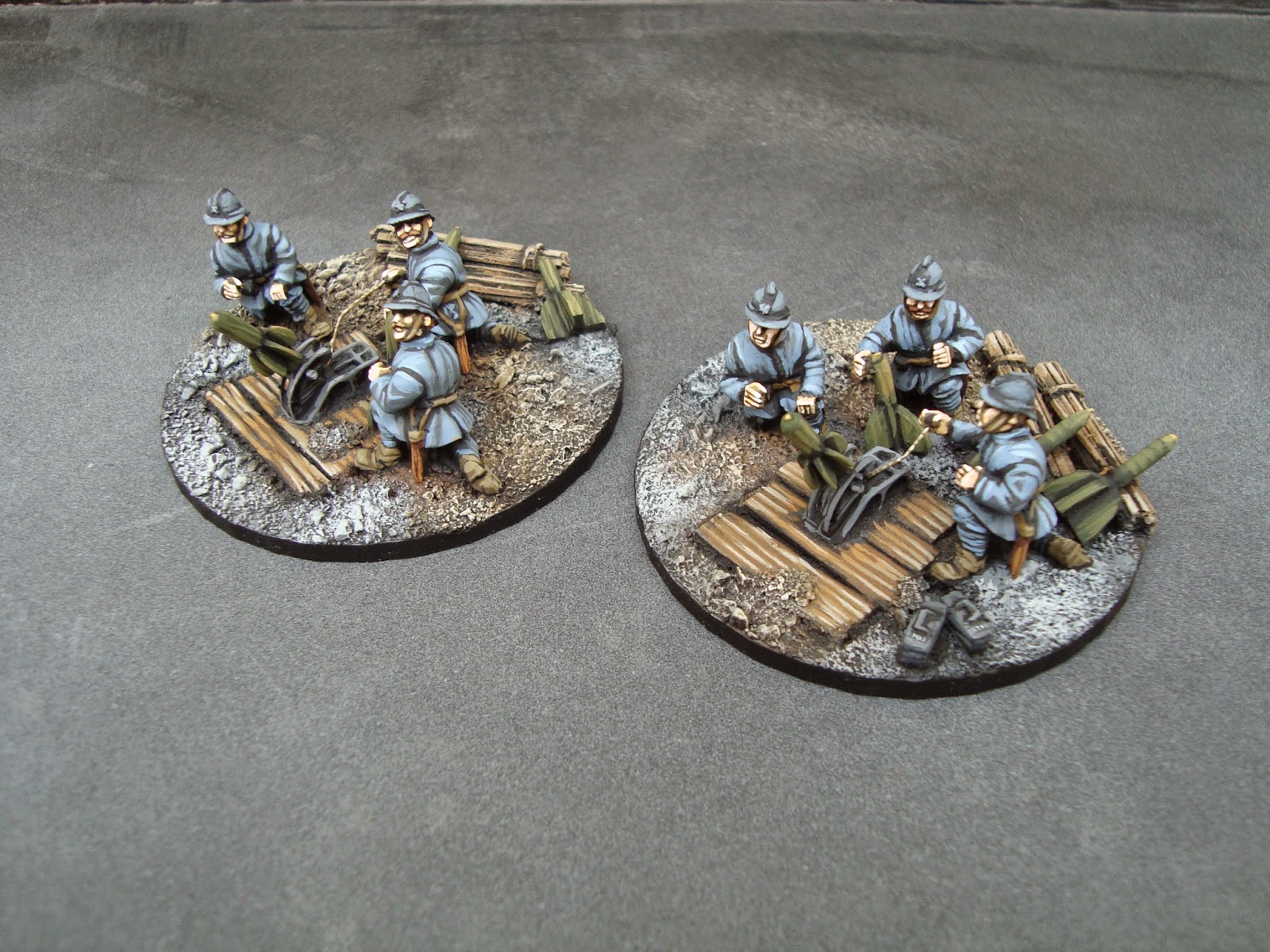 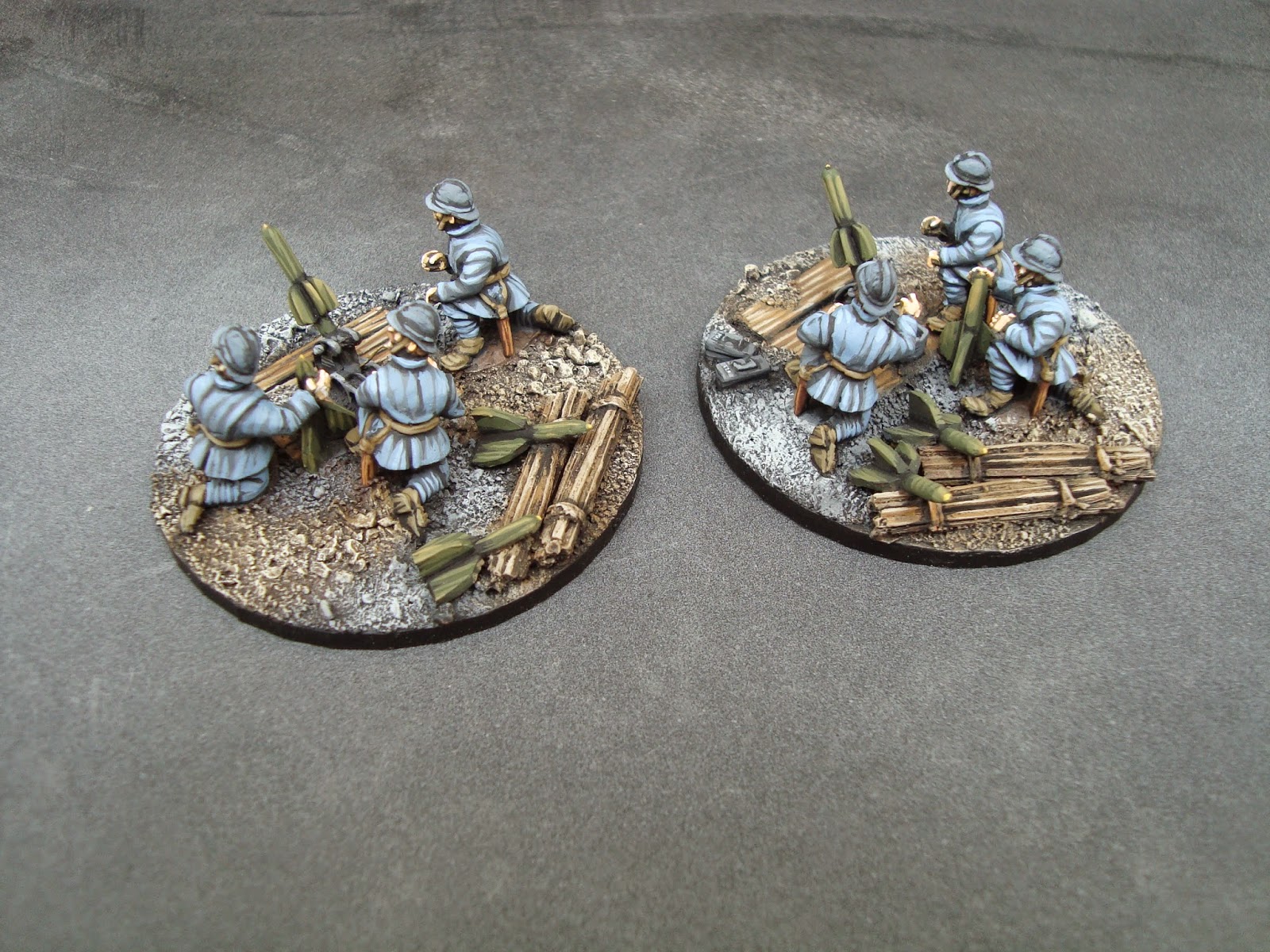 The vague, as yet not fully formed idea in my mind, is to stage a game at the club in late November or December featuring the African troops of the French Army. Finding the right scenario for the disparate elements is going to be interesting! I like to imagine my wargaming in terms of projects, with the thought in my mind of moving from the “Verdun Project” to an “African Autumn”.

Finally, it was the Partizan show in Newark, England this weekend. I was not able to go for family commitment reasons, but my chum Richard Clarke and Nick Skinner made the trip north. They very kindly provided me with some fine photos of the wonderful early Great War game staged by Aly Morrison and Dave Andrews. Both Aly and Dave have long been hobby heroes of mine, and to my mind they consistently set the bar of excellence with their amazing displays. From the photos, you can see that their game on Sunday was no exception. More photos are available at Phil Robinson’s excellent blog, News from the Front HERE. 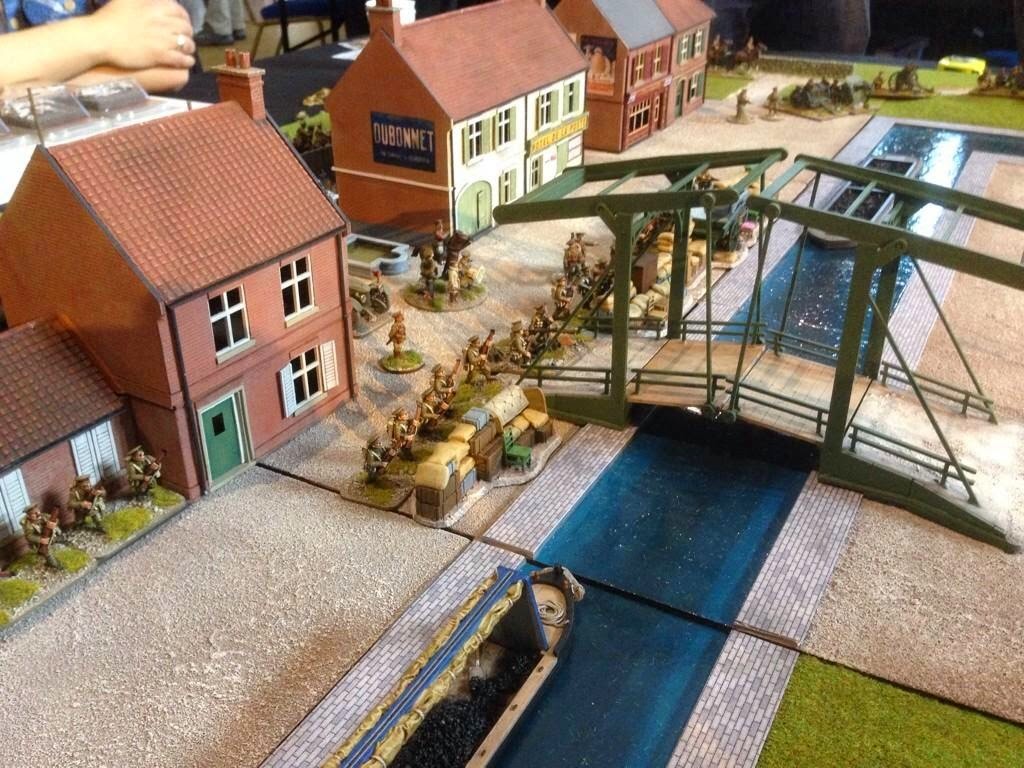 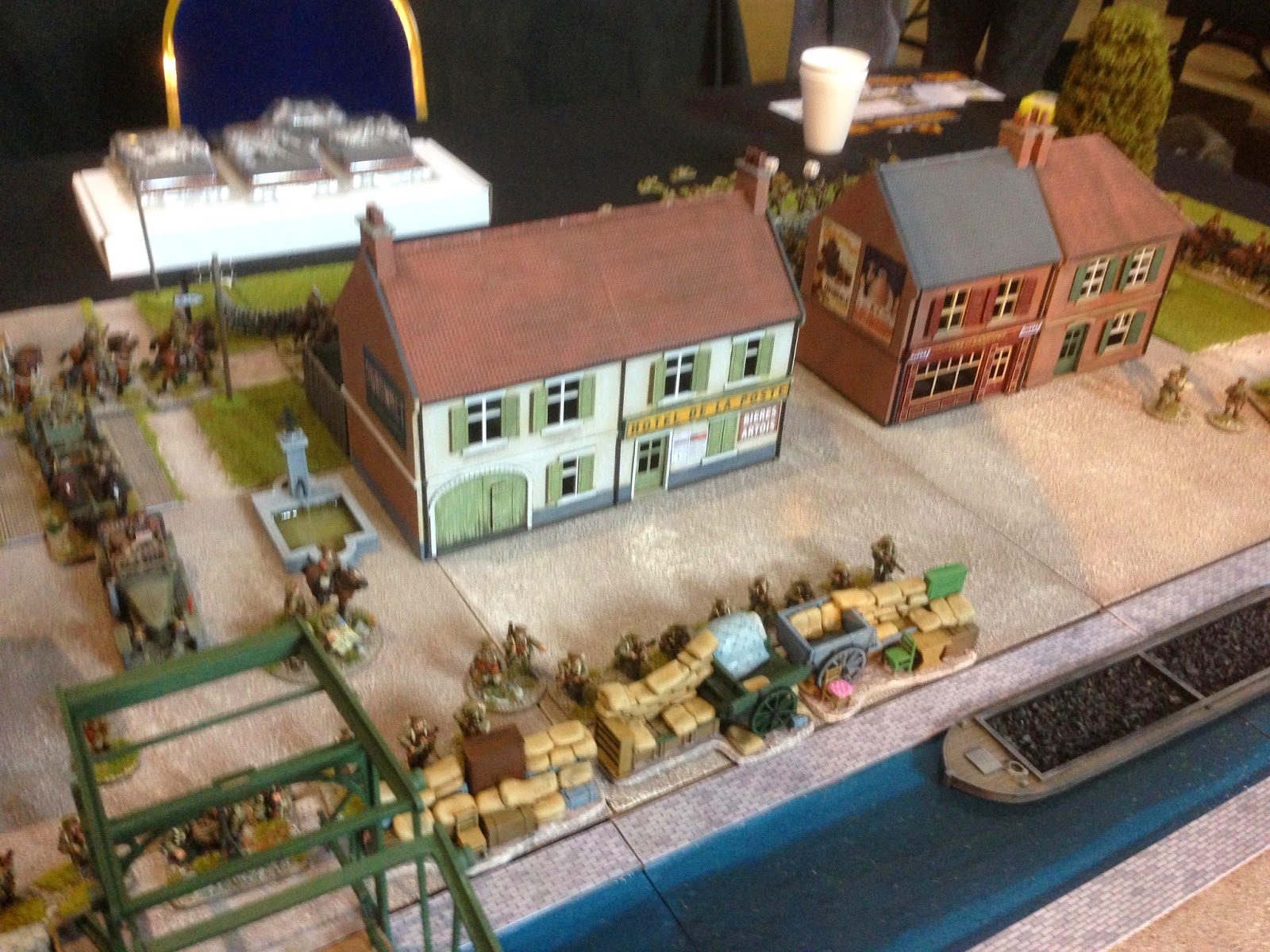 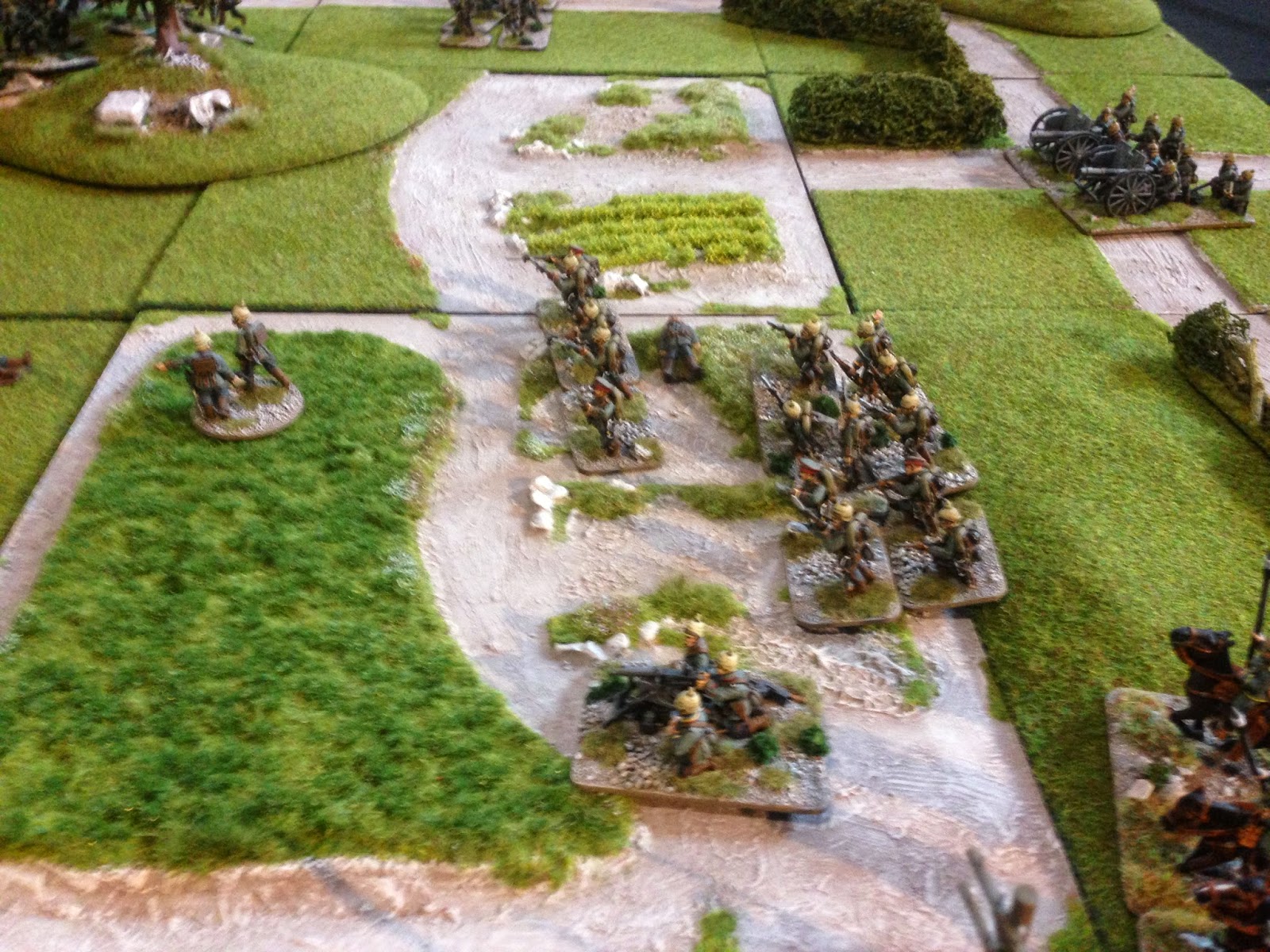 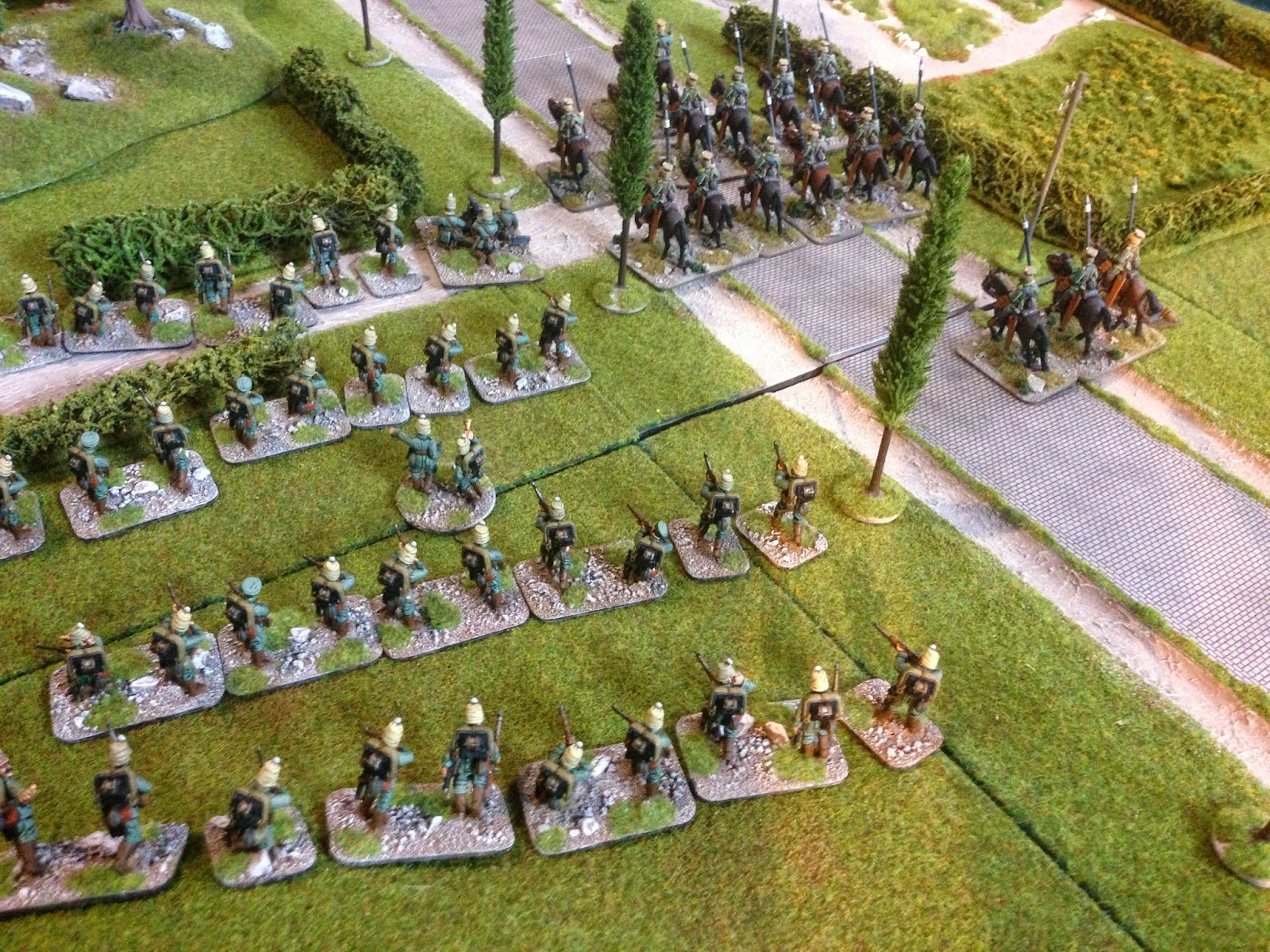 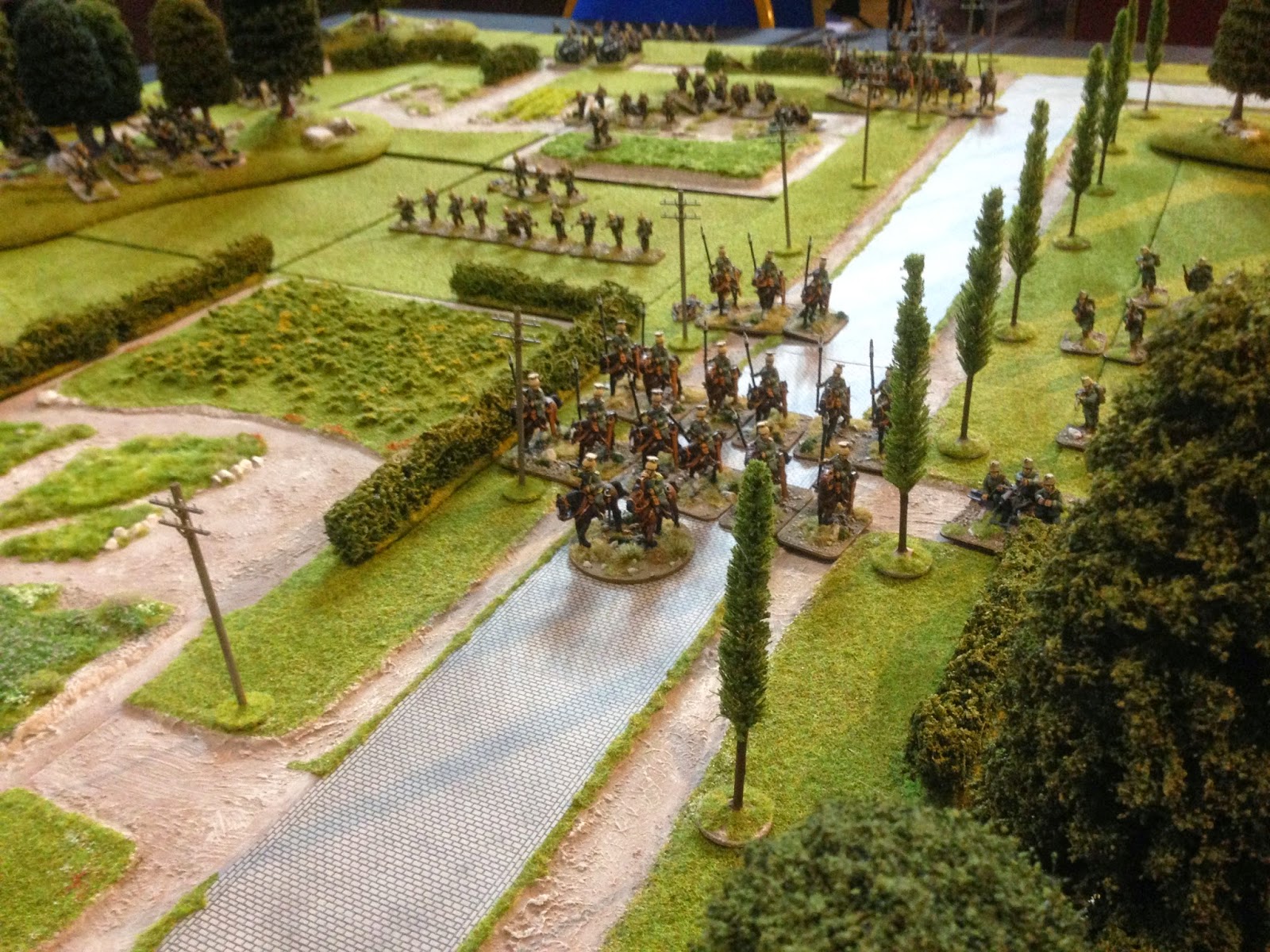 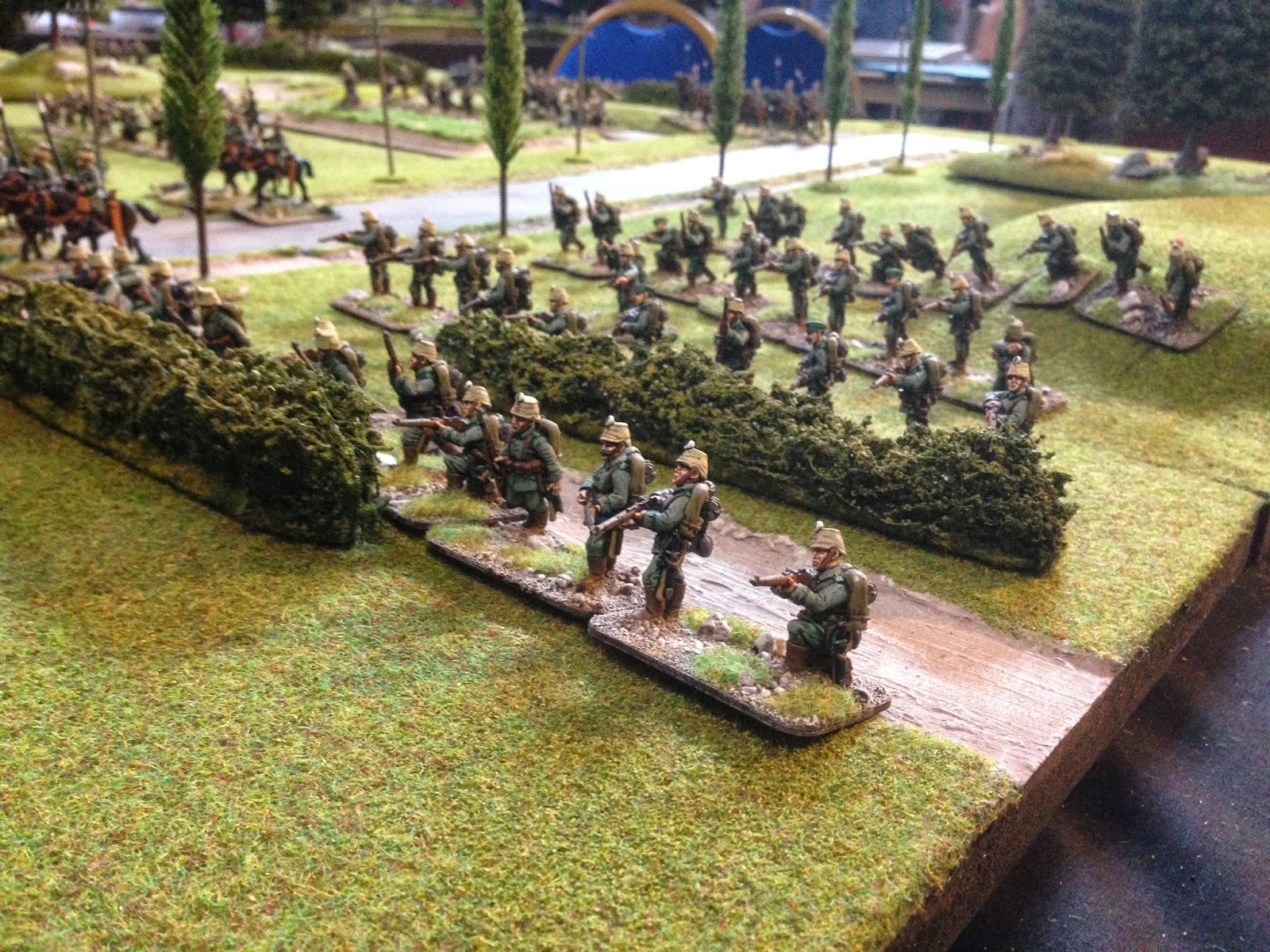 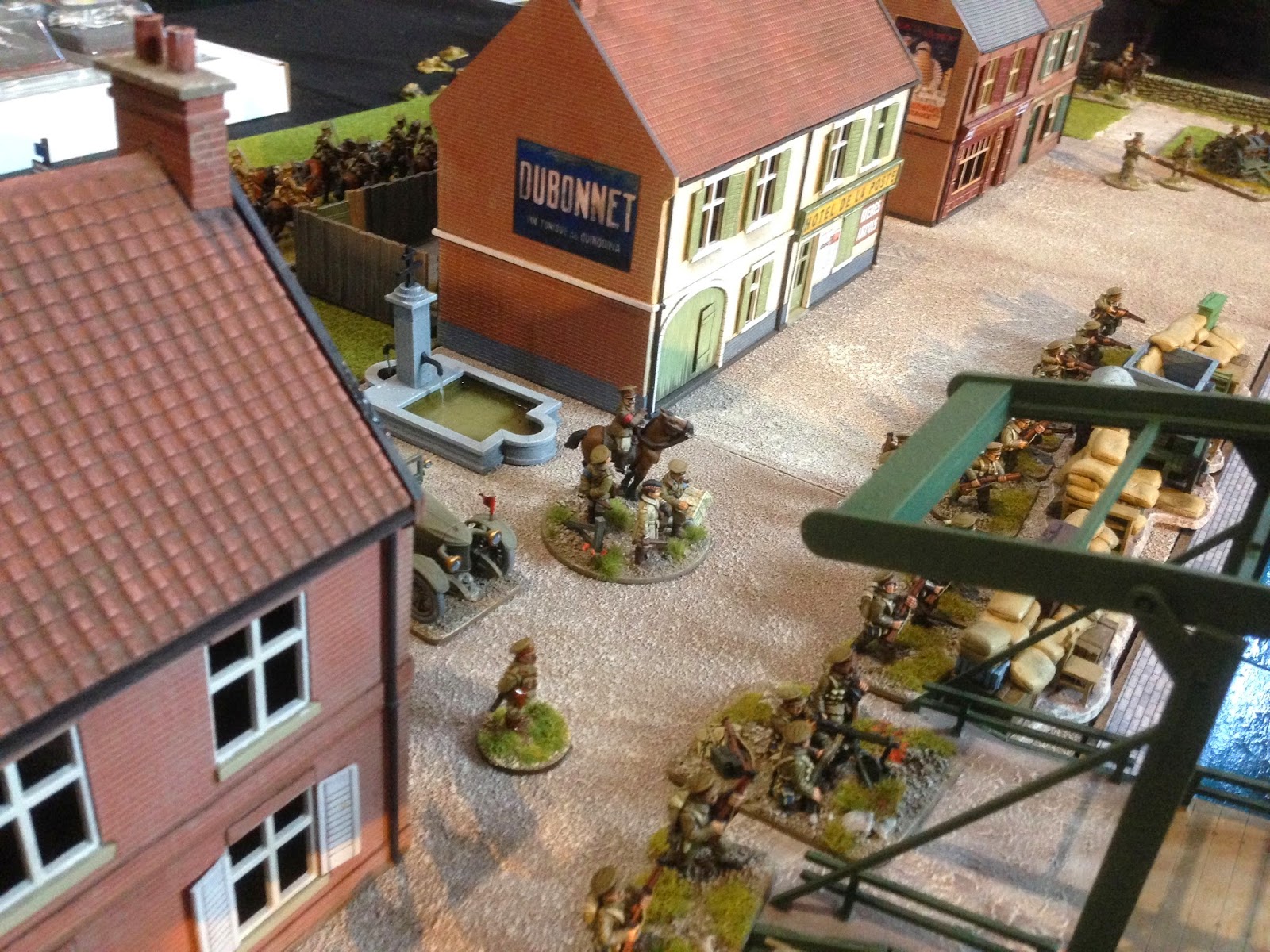