I thought I’d post a few pictures of some British trench raiders which I’ve been painting in the past couple of weeks, really to keep my momentum up during the long, cold January months for my “Winter Sports” trench raiding project. 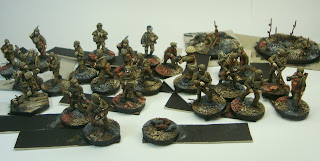 I’ve enjoyed painting these guys. They’ve made a real change from simple British and German infantry. I’ve photographed 22 of the figures – there are another 10 to finish off, plus a Vickers machine gun to give long range covering fire if the British attacker is fortunate enough to get the use of that weapon in the pre-raid “Winter Sports” troop allocation. I’ve then got about 20 German trench raiders, which I’ve not yet started. 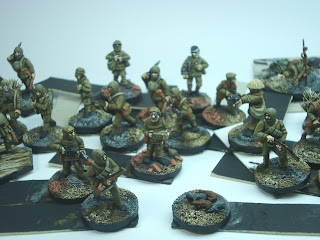 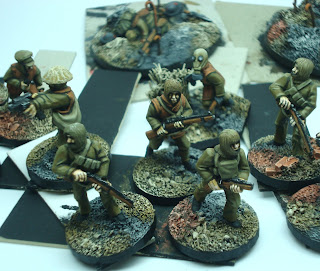 The standing figures in the photographs are from Great War Miniatures, Musketeer Miniatures and First Corps. The casualty figures are the excellent ‘generic casualty’ from Silent Invader from the Lead Adventure Forum, with the addition of some weapons, helmets and backpacks from MaxMini and The Assault Group. The swarm of trench rats were from Irregular Miniatures.

While the first two manufacturers are well know for their Great War subjects, I don’t think that First Corps have got the same following....at least not yet. I found the First Corps figures (available at www.1stcorps.co.uk) very clean and well cast, size-compatible with Musketeer and Great War Miniatures and very reasonably priced. Delivery was very fast, and certainly within one week to mainland UK. The figures are characterful and easy to paint. They don’t have the same intricate surface detail as Musketeer and Great War Miniatures, and the sculpting is not as fine. However, they look good (at least to my eye) when painted. See what you think. Once I have finished all the raiding teams, I’ll do a shot of the First Corps figures so you can judge them against the others for yourselves. 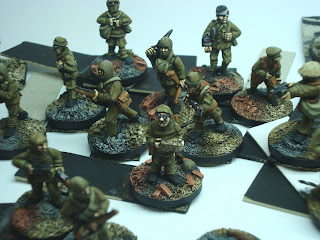 The figure holding a map in the photograph above is a First Corps figure and to my mind is a great sculpt – reading a map as he tries to navigate through No Mans Land by the light of starshells.

The British trench raiders in the photos are about at the 90% finished stage, just requiring varnishing and the addition of a little more detail on their bases. On quite a few of the bases you can spot barbed wire picket poles of the type which would have been present in No Mans Land in front of trench lines. I went a bit over the top on adding extra poles onto the casualty bases. I hope to post a few more pictures next time of the different sorts of barbed wire you can use on bases when I finish the figures later this week. 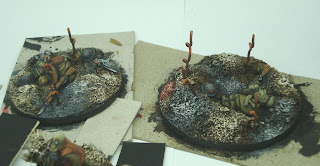 Finally, as this is a WIP post, I've posted a couple of pictures of where I started out with these figures just before New Year. You can get a glimpse of the Vickers machine gun team, and some of the German trench raiders, as well as some of the British trench raiders I've not yet finished... 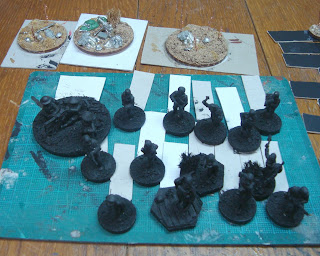 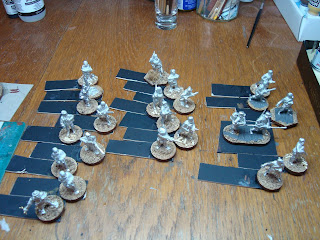 This was the second of our “Winter Sports” trench raiding games played just before Christmas using the “Through the Mud and the Blood” rules from TooFatLardies. We used the article by Richard Clarke, “Winter Sports”, featured in the TooFatLardies Christmas Special which Richard brought out in December. 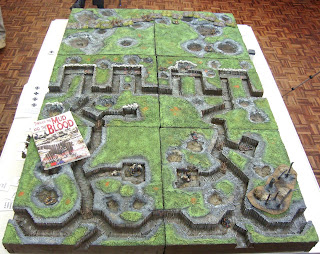 The British raiders in this second raid rolled the “Peaceful Penetrattion” mission. The aim in the raid was for the attacker to capture and occupy a 12” section of the defender’s trench and hold it against an enemy counter-attack for a set period of time until reinforcements had arrived. The scenario was taken from an Australian tactic which was developed towards the end of the War as an alternative to a daylight frontal assault on German front line trenches. The concept was for small raiding parties to infiltrate into the outpost line of the German defences, which were by then organised in depth and over a series of Stellungen and defensive positions rather than being focused solely on linear barriers. The Australian’s idea was to penetrate the German defences at night, and for the raiders to be quickly reinforced by substantial forces in darkness thereby avoiding the need for long preliminary bombardments.

The scenario we played included a few of these elements. The Australian players took a small raiding team of 27 Australian figures. Unlike the first trench raid game we played through before Christmas (see my earlier blog post), the attackers (the Australians) did not attempt a crossing of No Man’s Land at all points of the table. Instead, the Australian commander cunningly chose to ‘purchase’ an additional NCO in place of a couple of privates and split his forces into three groups (each led by an NCO) with a junior officer leading all three groups forward in a single concentrated assault on a small part of the German front line. 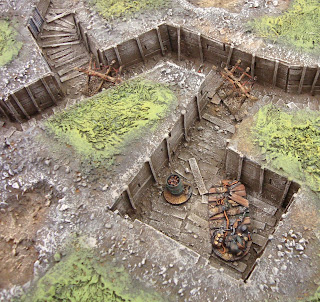 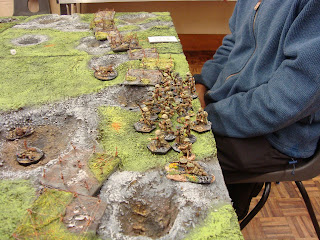 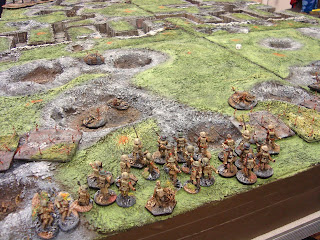 Purchasing the extra NCO allowed each of the small raiding groups to be led by a ‘Big Man’ , thereby freeing-up the junior officer of the raiding party to use his initiative under the rules to deceive the enemy sentries into thinking nothing was amiss (by reducing the number of spotting and “whistleblowing” points which the Germans were accumulating in the game). A cunning approach, well worthy of the most determined and tricky Australian on the Western Front!

Against the raiders was a small force of German Stellungsbattalionkämpfer defenders garrisoning the line and a force of 26 Eingreiftruppen to reinforce the German defenders once a general alarm had been raised.

The Australian tactic of using their Officer Big Man to reduce the successful German spotting, or “whistleblowing” rolls, worked extremely well. So well, in fact, that the Australians were able to penetrate into the German trench without being spotted and despatching one of the three German sentries assisted, it has to be said, by a woeful set of dice-rolling by the German players. 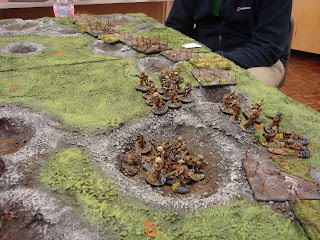 Instead of the general bumbling about of Lieutenant Carshalton in the first game, the Australian players really stepped up to the crease as they peacefully penetrated the German’s front line trench. 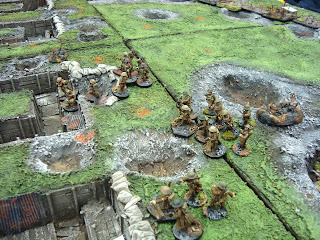 Dropping down off the parapet, the Australian Officer, Captain Murdoch, was able to deploy his “ferret” into a German bunker occupied by an section of the German Stellungsbattalionkämpfer which had not been alerted. 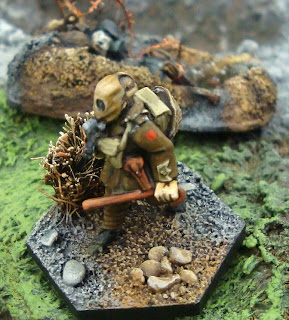 The “ferret” in question was a ferret bomb, an explosive device rigged up by the Royal Engineers consisting of 8 slabs of guncotton and encased with shaped wooden panels which had been rounded so that the charge could be rolled down a dugout without lodging on the steps. Rather than facing the “ferret” rolling down the steps of the bunker, the first section of German defenders, perhaps wisely, chose to surrender.

By now the commotion in the front line trench had generally alerted the other German defenders, bringnig Captain Murdoch face to face with the Hun.... 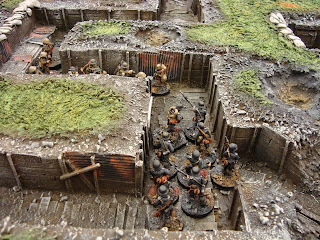 The resulting fighting in turn heralded the arrival of Gefreiter Artur Sturm and two detachments of Eingreiftruppen to challenge the Australian penetration. 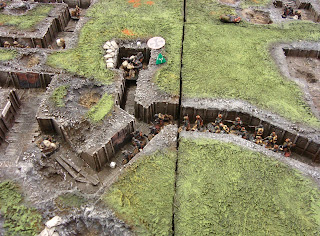 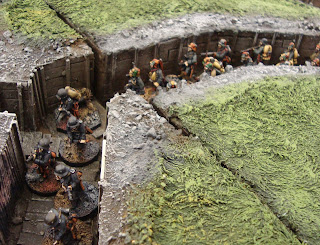 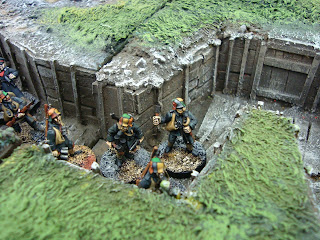 However, by the time German Eingreiftruppen had started to arrive from the communications trenches, the Australians had already held the enemy trench for half the time required to achieve a victory. The alerting of a German MG08 Maxim machine gun team in a bunker threatened at one point to unbalance the Australians’ success. However, after a grim struggle ensued, the Australians held on to launch their flares and obtain reinforcements. 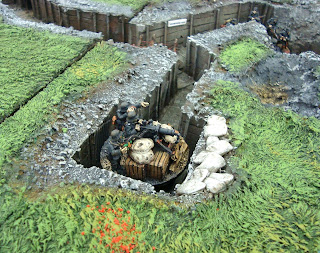 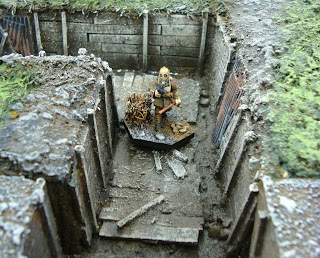 We had an interesting debate during and after the game concerning the entry points for the Eingreiftruppen reinforcements. The German players had pre-determined the entry points as being the communications trenches. If the German players had brought their reinforcements in over the top of the trench network, allowing them to drop into the middle of the front line trench, the result could well have been very different, as the result would have been to split the raiding forces into two smaller groups, as the overhead photo below shows. It would have been a bold tactic, but very much in keeping with the traditions of the Stosstruppen. Perhaps this tactic will happen on other trench raids....stay posted on that thought!! 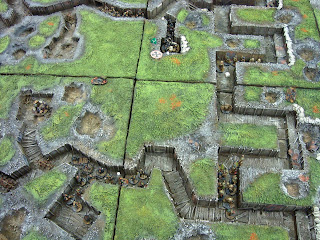 All in all, a really enjoyable game, and an undoubtedly better result for the Australians than the Ashes! I’m a little behind with posting games and new figures, so I shall try and catch up over the next few days with a blog post about what’s been on my painting table so far this year. 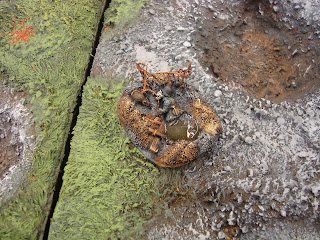 Posted by Sidney Roundwood at 11:30 9 comments:

A very happy new year to everyone out there! And my very best wishes for 2011. 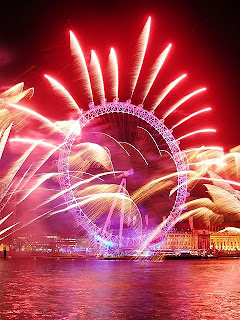 2010 was a pretty good wargaming year for me. Of course, there was a lot I planned which I didn’t get round to, but the balance was firmly on the positive side of the wargaming ledger. Right up at the top of the achievements ledger was meeting some new gaming friends at the St Albans club and at shows like Salute, SELWG and Burton. For me, sharing experiences with old wargaming friends, getting figures on the tabletop, playing games and welcoming new members to a wargames club or group are what the hobby is all about for me.

This year I also started this Blog. I’d like to thank everyone who’s followed, commented and read it. The comments and things people have said have been really appreciated – each and every one of them! What started out as somewhere to post a tutorial about building trench terrain has become a bit of a focus for what’s going on in my wargaming hobby. It’s added a huge dimension to my modelling, terrain building, painting and gaming and I’m really looking to continuing it in 2011. I’d also like to say a HUGE thanks to the other blogs and podcasts out there in the wargames community, whether historical, fantasy, sci-fi or RPG which have inspired me this year. There’s too many to mention, but some of my favourites Blogs are listed on the right hand of this page under “Great Wargaming Blogs”. Again, Ladies and Gentlemen, thank you for all the inspiration! I only hope I can give something back…

So, what’s in store for 2011? Well, I’m usually a bit nervous about predictions and New Year’s Resolutions. However, what I am hoping to do first is post two or three battle reports in the next couple of weeks covering some more of our trench raiding games over the Christmas and New Year period. 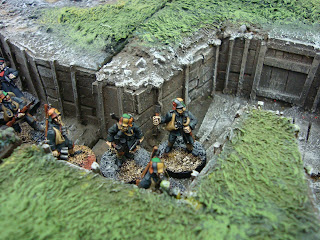 I’ll be blogging photos of some new trench raider figures I’ve finished recently and some no-man’s land terrain boards which I’ve been working on for these games. 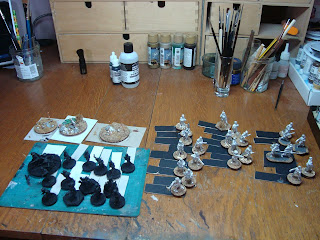 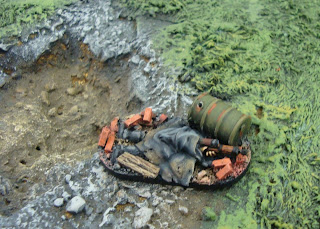 Towards February and March, I’m intending to do a successor modelling project to last Autumn’s “B” Battalion of the Tank Corps. The focus in the Spring of 2011 is going to be on a troop of Lord Strathcona’s Horse from Moreuil Wood in March, 1918. I think cavalry have been slightly overlooked in Great War wargaming, and I hope I can persuade a few people to look again at this really interesting dimension on the battlefield.

Later in the year I hope to be play-testing some divisional scale Great War rules based on, and evolving from, TooFatLardies’s rules for the Great War in the Middle East, “If the Lord Spares Us”. Richard Clarke and myself have been building armies in 10mm scale for this, with the Germans finished and the French and British still to go. I’ll be putting some terrain together for these rules, which I’m hoping will be fun to do.

Finally, the ‘Big Project’ for this year will be a new army, probably starting after the summer. I’ve a French army from Scarab Miniatures waiting patiently in the painting queue, but Great War Miniatures’ Americans from Belleau Wood and the Meuse-Argonne are looking very tempting.

Whatever happens, it should be fun. And however you spend your 2011, I hope it will be healthy, happy and filled with great wargames.
Posted by Sidney Roundwood at 13:51 4 comments: