The Sound of a Distant Drum: The Buildings of Laarden, 1688

One of the things I'm looking forward to doing in my late seventeenth century setting for wargaming is matching up my figures with terrain which looks like coming from the same period and place.  As many of you know, this can be a fairly lengthy progress.  Terrain gets built up slowly, with new pieces being added each year to the collection.

I've a vague, general plan to work on a set of Flemish terrain boards next year (probably in the Spring), but I'm still enjoying adding specific buildings and terrain features as I'm paint up figures during the course of this Autumn.

I'm particularly hoping to try and create a "feel" for the lost world of 1688 Flanders.  I've tried to do this by hunting down town plans from the period.  One of the nicest I've seen is the one in this  wonderful perspective map of Harderwijk from the 1670s: 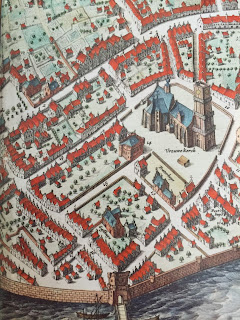 I love the way that the buildings have a communal gardened area, frequently furnished with fruit trees.  I would imagine that within those enclosed areas, vegetables could be grown and poultry might well be kept.  And slightly outside the town buildings, perhaps an old, poorly maintained (and definitely not yet Vauban-improved) town wall, and an open landscape of dykes, poplars and windmills.

The first question is which buildings to use.  I've long been a great fan of the 25 mm buildings produced by Hovels in resin.  These are now pretty venerable, but have stood the test of time very well.  They are little small for modern sized 28mm figures, but fit the Dixon Miniatures and Foundry ranges for the 1680s and 1690s very well.  Although resin can be fragile, the "European" buildings range by Hovels in 25mm is pretty robust and fairly adaptable.  I'm planning to use the range for most of the Laarden buildings - they seem to catch the right feel and spirit of Flemish towns from the eighteenth and nineteenth century, and I am sure they will do fine for 1688 at a pinch. 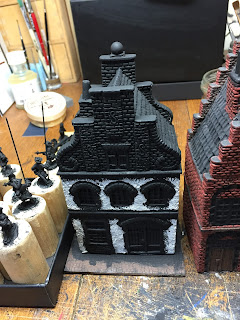 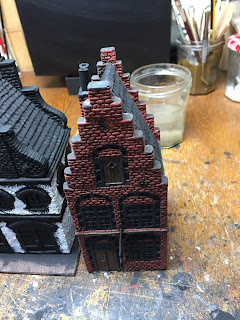 The walled enclosures can be made using some of the 25mm walls available from Hovels.  These are a bit rough and ready, but nothing that some green stuff can't fill and fix.  I doubt that seventeenth century brickwork was universally perfect, especially brickwork used for enclosures and walled gardens. 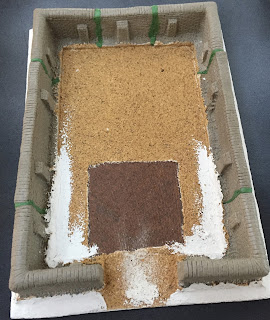 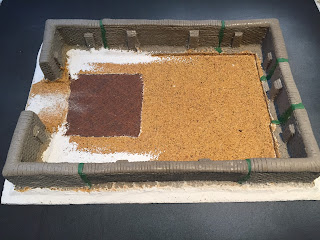 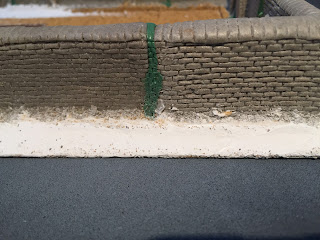 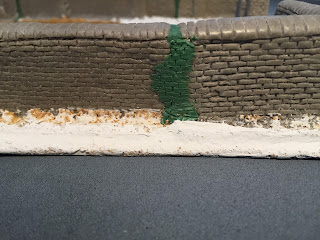 I've arranged this test terrain piece so that the building stands at the front of a walled enclosure, with plenty of room for a variety of terrain items to be slotted in the back.  More on those to come in a later post. 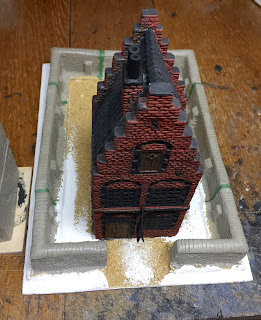 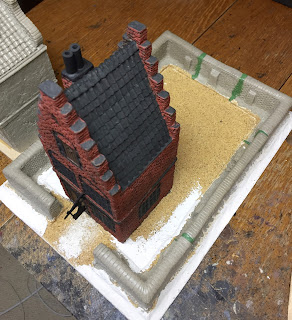 I'm planning some modest gate posts to finish off the front of the enclosure.  And of course, with every building, comes a variety of Laarden townsfolk.  More of that kind of nonsense to come in later posts. 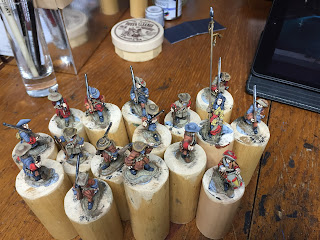 I’ve been steadily painting throughout September. I’ve finished three battalions of Flemish foot from Laarden (my fictitious town in the Spanish Netherlands of 1688), which are now in the process of being based. More of that in the next Blog post.


I’m moving on to a contingent of allied North German foot, recruited by the civic elders and burghers of Laarden to brace and supplement Laarden's otherwise creaking military capacity. Battalions of foot and horse could still be recruited through private contract and alliance in the late seventeenth century, and these formations have fascinated me for years. However, tracing the history of North German mercenary contingents is an obscure process. The Dutch States General were regular contractors for German and Brandenburg troops in the 1680s. On 5th August 1688, the Dutch States-General concluded a contract with the Elector of Brandenburg for 7,510 troops, a figure adjusted upwards to 7,884 in 1690. John Carswell’s excellent book "Descent on England: Study of the English Revolution of 1688 and its European Background" mentions that the contract, signed by the Duke of Portland, was one of many that summer with half a dozen princes across the North German plain. A treaty with Brunswick-Lüneberg-Celle was signed on 8 August 1688 to provide a further 2,710 soldiers. Agreements were also signed with Brunswick-Wolfenbüttel, Hesse-Cassel and the Duchy of Wurttemberg in August 1688. 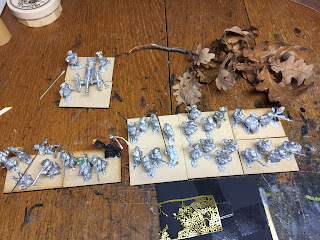 These German mercenaries, hired by their own princes, dukes and electors, replaced Dutch troops which would either accompany William III on his invasion of England, or release Dutch troops to face Louis XIV in the Spanish Netherlands.


I would love to be able to discover more regarding the actual contractual terms on which these contingents, battalions and squadrons were recruited. Did the contracts specify how long the troops would be hired for? Where would the troops be marshalled in anticipation of the commencement of the contractual term of hire? What conditions of use were stipulated? Was there any detail of any battlefield or campaign deployment mentioned in the contract (such as limitations on use in sieges, or in a geographical area "such troops not to be deployed south of the Sambre", and so on)? What provisions in the contract was made for death, wounding or desertion of troops, or loss of equipment?Did the troops bring any accompanying artillery? What did the contract state about looting, or what would happen if the formation was destroyed in action or on campaign?

Unfortunately, none of the books I have read cover these sort of details. It may be that this is yet another of those mysteries from the late seventeenth century which is probably under our noses, but well hidden.  Alternatively, it is perhaps more likely that the contracts for hire of such formations were fairly simple, just stating that a number of troops would be hired from a particular prince or elector by a certain time at a particular location.

But, as ever with wargaming, it’s fun to imagine the terms of contracts which might have been drafted by one of the Laarden civic dignitaries in a candlelight Flemish Voorhuis with the military plenipotentiaries from Emden, Lübeck, Leer or Bremen present in the room and looking on as the contracts of hire were negotiated.

Here’s some (very draft) ideas which I’m thinking of building into a play-test set of battle rules for the period which I’ve been working on for the past few months:

Turning to the North German troops I have in mind for my formations, I’m again using Dixon’s 25mm Grand Alliance range, mixed with a few Wargames Foundry figures to make up a forlorn hope (or “verloren kinderen”, if you prefer). 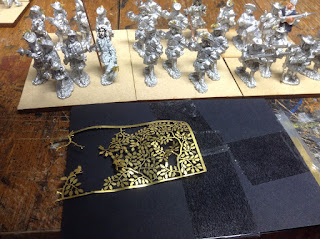 To mark out the troops on the tabletop battlefield, I’ve been adding etched brass fret oak leaves to the soldiers’ hats. This is less fiddly than might appear. As long as you have a very sharp modelling knife of scalpel, the brass oak leaves can be cut out, bent and glued in place using tweezers pretty simply. I know that some figure manufacturers make these, but the etched brass fret are, I think, worth the extra trouble. 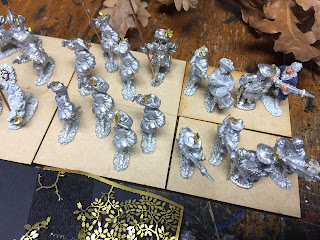 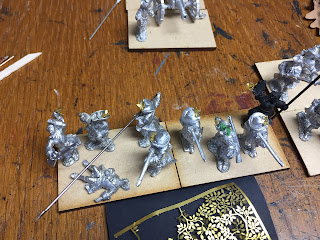 You can pick up the etched brass oak leaves (and other leaves) from either Hasslefree or Scalelink. Both of these suppliers are great to deal with, and come recommended by me. The Hasslefree frets are very reasonably priced and are slightly thinner than the Scalelink ones.

Next time, it'll be a quick look at basing and more flags from Laarden.  Hope to catch you around for that!
Posted by Sidney Roundwood at 12:01 20 comments: 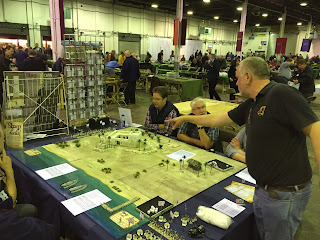 It’s been a while since I brought you a report from one of the wargames shows in the UK. There’s an obvious reason for this – which is I don’t get to visit many. Work and family life often prevent me from taking to the road and travelling around the country, even thought the shows are almost always on a weekend. It was a rare treat, therefore, to make the trip up to Derby World Wargames over the weekend (now held in Castle Donnington), accompanied by my good chum and Chief Lard-meister, Mr Richard Clarke.

We ran a participation game of ‘Viva Ras Begas’, and excellent short scenario using the Sharpe Practice 2 rules form TooFatLardies. The action was set in the Horn of Africa in 1840, and lots of details of the game, the figures and the terrain are available HERE on Richard’s Lard Island News website. 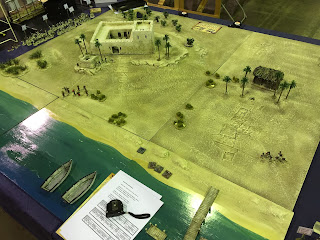 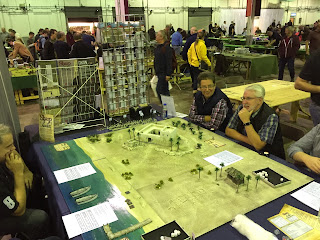 Everyone  seemed to have a fine time playing the game, which saw two thumping wins for the evil African slave-traders. Good job that history never turned out like this!  Huge thanks to everyone for playing, chatting or just stopping by. 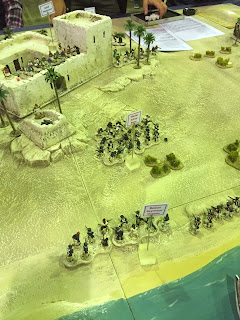 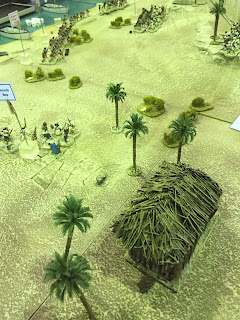 I had a good chance to walk around the show and collect a few things. I met new friends and old, and thanks to everyone who made me feel very welcome. I think that every one of the demonstration games I looked at was at least a very good standard, with a select few being really excellent. While not discounting the merits of the other games at the show, one game, based on the Battle of Rain in 1632, caught my eye. 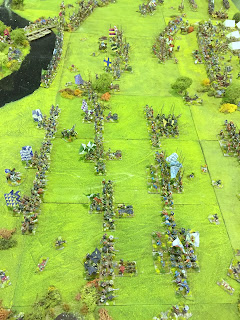 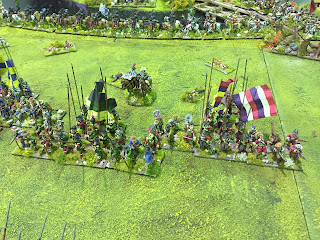 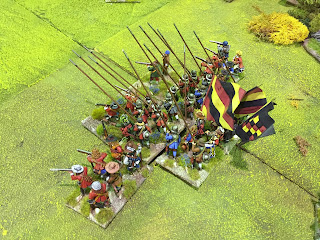 As a Thirty Years War game it looked superb. I had the chance to chat with Dave, who was running the game and had painted the figures, at length. What I loved about Dave's game wasn’t just the amazing standard of painting of figures, or the superbly hand painted banners. What excited me was that the units had been built in a very eclectic manner, using figures from the widest possible range of 25mm figure manufacturers. 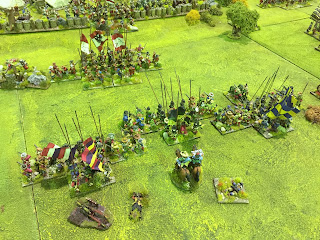 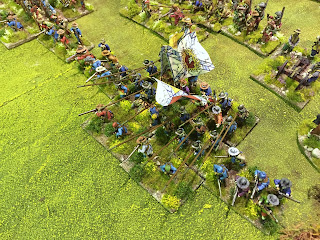 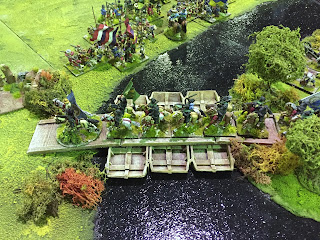 There were Wargames Foundry, Warlord Games, Essex, 1st Corps, Dixons, TAG, a small number of Redoubt and no doubt others in the Imperial, Weimarian and Swedish regiments and squadrons. While figures of markedly different sizes were not mixed in the same unit, Dave mentioned that he had gone out of the way to mix figures of the same size of different manufacturers. The result was amazing. The differences in 25mm figure size and style blended seamlessly, as they so often do when the figures are on finished bases on fine terrain. Sometimes when we hold two 25mm figures in our hand, they can look to be very differently sculpted, shaped, sized and proportions. When painted, these differences can, I think, melt away in the glory of a game like Dave’s. 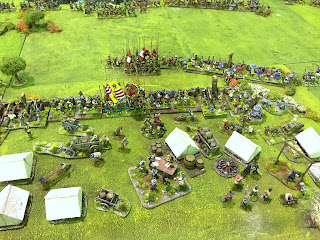 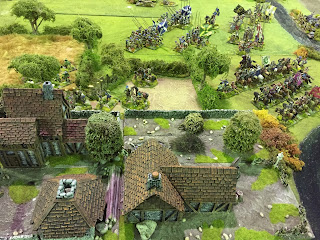 The one downside of an otherwise good venue was the dodgy lighting, as sadly you can see from some of the photos above. For once, my hamfisted photography was not to blame, but rather it was the electric light in the venue, which seemed to have a distinct ivory cream glow to it. If the colours in the photos look a little vivid, and on the yellow-ish side of the colour wheel, I am sorry – but for once, I don’t think it’s my fault!
Posted by Sidney Roundwood at 14:15 39 comments: