So, now is the time to pour yourself a glass of the golden ale from one of Laarden’s breweries, or enjoy a cup of coffee illicitly brought to the city through the French blockade, and drift back to my alt-historical nonsense from the year of 1688…. 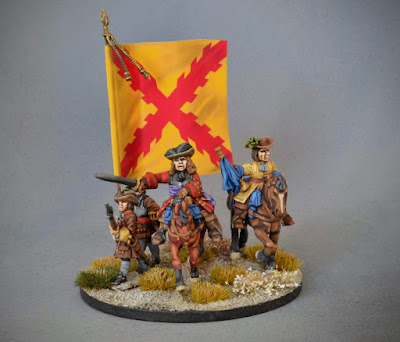 The first of the “Characters” is Hannes van Breughel, Count of Ieper and Lord Commander of Laarden. Hannes is a converted Wargames Foundry figure, with a sword arm swapped for his originally cast-on ineffectually-waving arm, and with some green-stuff feathers and lace added. The trumpeter is Wargames Foundry, with just some added brass fret oak leaves on his hat – which is my field-sign for Imperial troops. 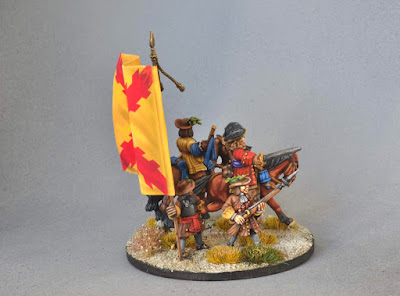 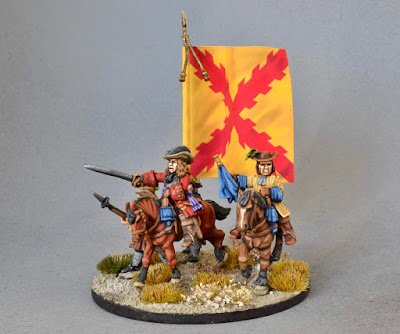 The two soldiers are Dixon Miniatures, with more oak field-signs added, and painted in suitably earthy Flemish browns and ochres – to fit the colour scheme of the other Flemish regiments in my Laarden collection. The Imperial standard, in Hapsburg scarlet and yellow, is from Iain at “Flags of War” – whose website and flags I can heartily recommend. The base is 60mm MDF, 3mm depth, from Warbases.


Here’s the Lord Commander’s Character Card. I had in mind that the Flemish commanders for Laarden would be somewhat untried and untested when faced by an assault of the ferocity of the French army of 1688, led by the Marshals of "Louis Le Grand". So, I tried to conjure something which suggested finery, but tinged with some slight nervousness about the Lord Commander's "credentials" for command in the Field. 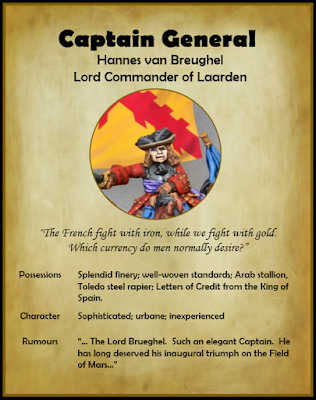 From one nobleman born to lead (with uncertain abilities but from the right side of the Laarden highway), to another from the other side of the cart-tracks.  Every crisis brings unusual heroes to the fore, and allows us all to be astonished by the quiet tales of sacrifice and determination. And this would be true in the alt-historical world of 1688, as well as our own. 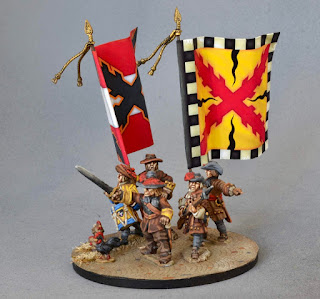 Much remains to be written of Laarden’s powerful guild-system. To some, it might be a medieval hangover of restrictive trade practices; to others, it might be a reinforcement of community in the face of economic change. Whatever the academics might say, it’s true that the Laarden Guilded Company of Tulip Cultivators contributed significantly to the defence of the city in 1688, not least in the form of Captain Jan de Vroot, one of the redoubtable and irascible Guildsmen who has found his moment to shine as the French army threatens his City. 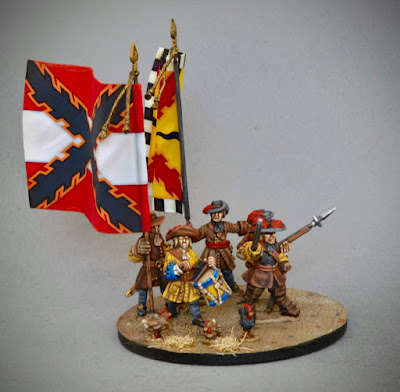 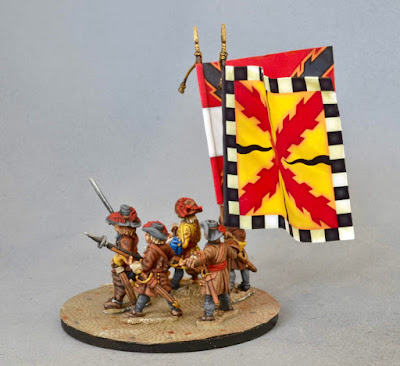 I tried to depict Jan and his civic militia comrades in earthy browns and ochres, but added a drummer in yellow – a colour which I’ve been using for Laarden drummers and characters since the start of the project a few years back.


Captain de Vroot is a Wargames Foundry ECW dismounted cavalryman, with a converted arm and green-stuff additions. Other civic militiamen have green-stuffed feathers on their hats, and the standard bearers are carrying more flags from Warbases. The chickens, wandering the Grote Markt, where the Company of Tulip Cultivators is assembling, are from Warbases. The cobblestone groundwork is more brass fret from Scalelink. I bought it a few years back – it’s very expensive, but gives a great depiction of continental European paving. Since then, a couple of companies have produced rollers for green-stuff with the same pattern, so one of those is on my list to purchase. The “straw” is…well, straw from a floor mat. Finials on the standards are from Bicorne Miniatures. 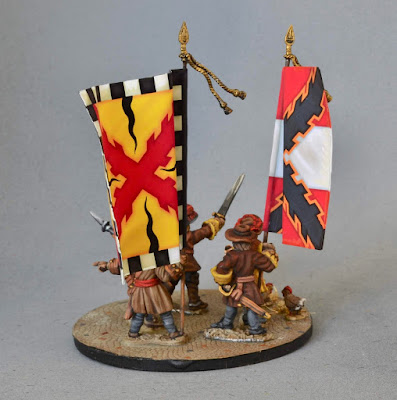 And, here's Captain de Vroot's card for the collection of the Characters of Laarden: 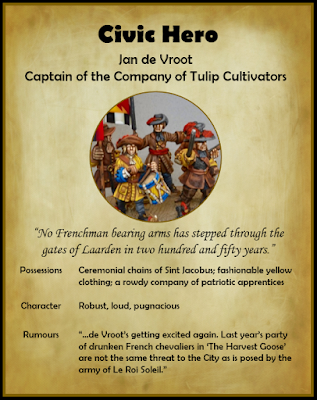 
And, now for a view of yet more "Adversaries of Laarden", in the form of two French engineers, a French grenadier and a Captain of Engineers - Pierre Duval, "The Mole of Versailles" - steadily advancing a sap towards the walls of one of the fortified villages close to Laarden. 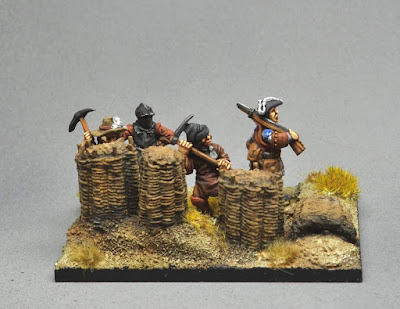 I've always had a sneaky love for the spade-wielders of the seventeenth century, either besieging a town with lines of circumvallation or, less commonly, digging defending saps to challenge the besiegers. I think that groups of engineers, miners and sappers always make a great addition to seventeenth century tabletop battles, so often providing the target for an attacking force in the game. 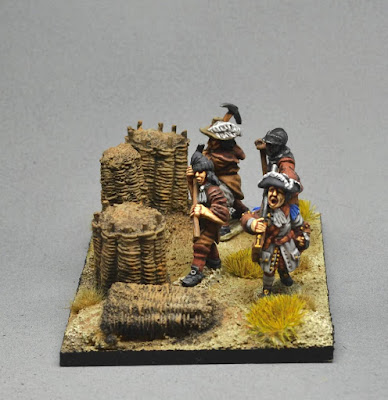 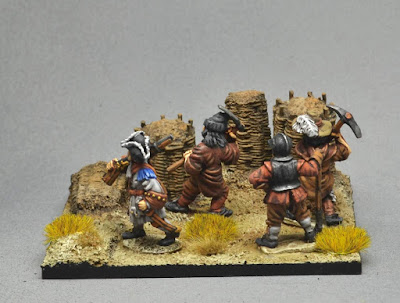 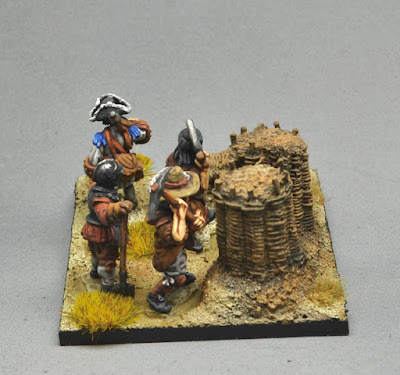 The figures here are a mix of manufacturers, being Dixon Miniatures and Wargames Foundry. I tried to add some extra greenstuff features to one of the engineers, just to give that soldier a defiant, jaunty look with greenstuff feathers in his hat. For the "Mole of Versailles" himself, I used a Wargames Foundry figure, depicted in robust siege armour, supervising the siege workings. 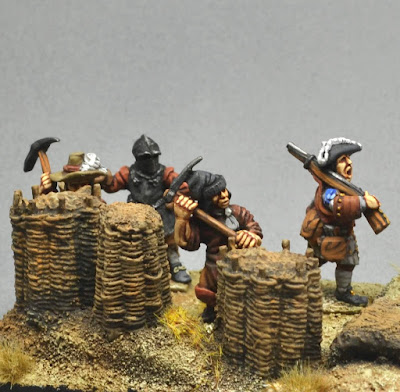 The gabions are from Front Line Wargaming and Colonel Bills, and paint up very well in a variety of earthen shades to match the uniform of the engineers. And, since this is part of the set of the "Characters of Laarden", they have their own collectible card to add to your collection! 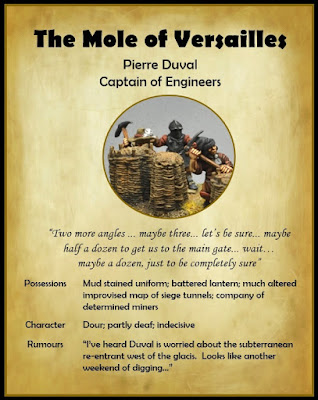 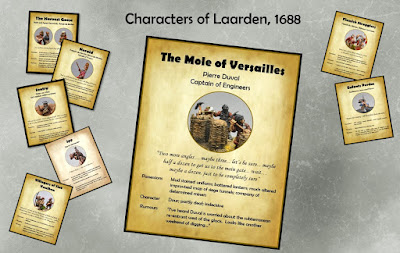 
As you know, my journey in the hidden bye-ways of 1688 Flanders is not just about the soldiers and commanders. Warfare in the late seventeenth century affected non-combatants, often in surprising ways, as I wrote about here on my blog a couple of years back. I wanted to add a couple of sisters to the collection of Characters. So here are Agnes and Margriete van Rompaey, and their children.... 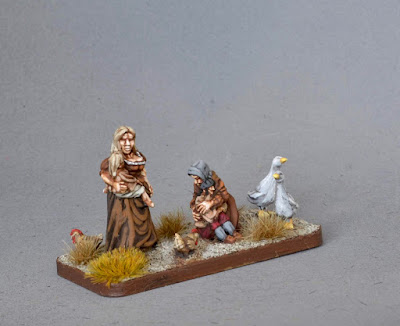 I loved painting these old Redoubt sculpts – at least once I’d managed to undercoat them. They’re chunky, look very un-prepossessing out of the plastic bag when they arrived, but painted up really well. You can cover any of the slightly clunky facial casting by a careful paint job, and by adding some basing to take the eyes off the slightly mis-sculpted children’s faces! 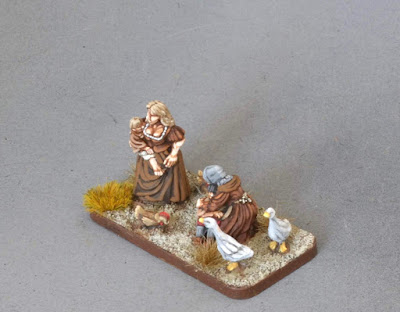 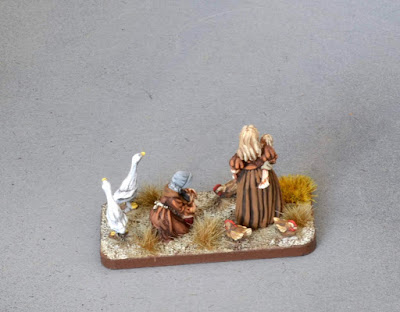 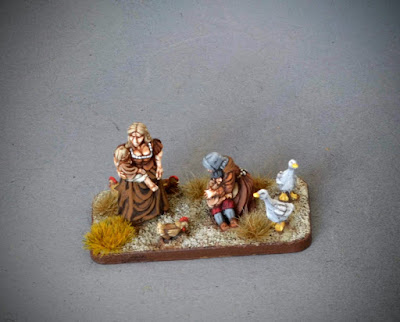 I thought they’d be perfect to grace either the streets of Laarden, or one of the cluster of satellite villages around the city. The chickens are again from Warbases (as is the base) and the geese are (I think) from Magister Militum.


I experimented with a softer brown edging on the figures - which I thought worked quite well. It's less harsh than the black edging - perhaps more suitable for non-combatants, maybe? 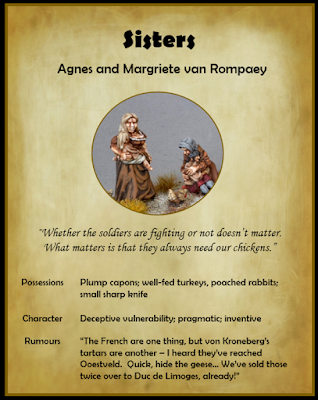 
And finally, as a painting treat for Easter Week 2020, I thought I’d add a small group of monks from the Laarden-based Brotherhood of Sint Jacobus. 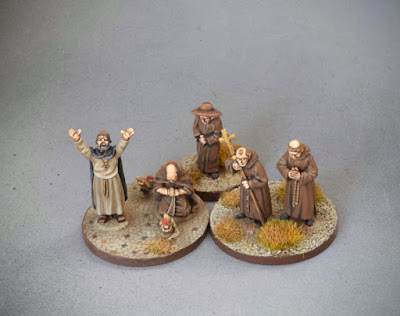 More from the Brotherhood of Sint Jacobus in later Blog posts, dear readers. Men and women of religious orders hold a real interest for me, and I think the Blog would benefit from a description of (at least one of) the miracles of Sint Jacobus at some point. 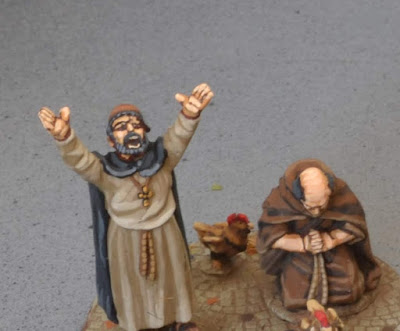 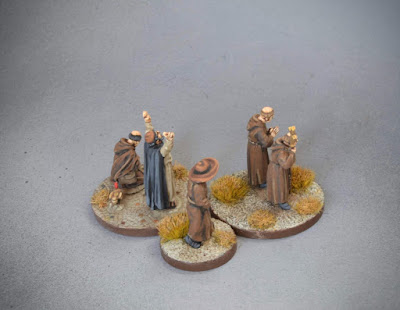 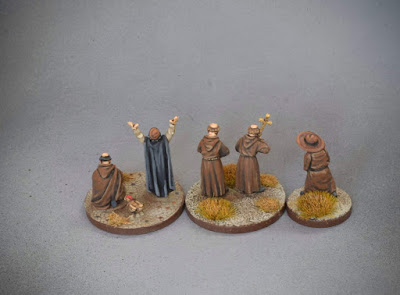 The Brothers are a mix of Redoubt (the brother with the hat) and Perry Miniatures, the latter being from the Perry’s First Crusade range but which make good monks in any period.


Looking through the lead pile, I seem to have collected far too many monks over the years, so I’m sure that more of the Brothers of Sint Jacobus will appear in Blog posts in the future. Blessed Be!!


Here’s their Character Card, complete with the Brothers’ cryptic possessions to be explained at a later date…. 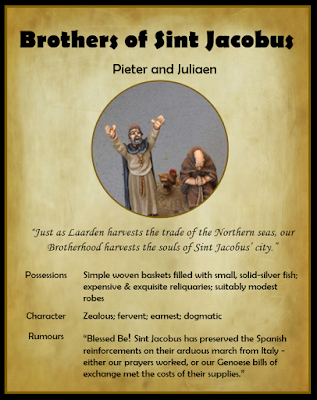 And here, finally, is the completed “Characters of Laarden” collectible-collection of cards for Challenge X. Did you get the whole set? 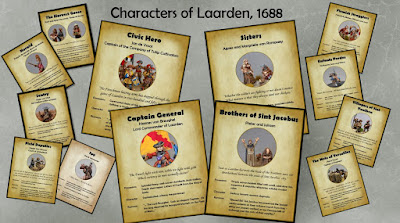 I've loved doing them.  Totally indulgent, frivolous, and sometimes downright silly.  Or, if you prefer, "quintessentially Roundwood", as a good friend once tweeted to me!

I did, however, enjoy them so much that I’ve thought of doing another set. Perhaps (in Old-School WRG fashion) “Enemies and Adversaries of Laarden”, or maybe “Allies of Laarden”. Let me know what you think.

I wonder if I could expand the current 13 Collectible Character cards to 26. Or even to 52. What’s that - making a 52 card deck of such nonsense?  No… no, surely I’m not THAT frivolous …. hmmm..