The Flexible Art of Slotting and Dropping

First, an apology for all who have been waiting patiently for the next instalment in this Blog. Please rest assured that I had not forgotten to update the Blog, but work got in the way of doing this (depressing, isn’t it, how that happens so often). Anyway, I am back and hope to finish stage 1 of the Blog a little later today (covering the Salute Boards). Stage 2 (the boards from Crisis 2009) and Stage 3 (new terrain boards) will follow in April 2010 and later in the Spring, respectively.

And a huge thank you to everyone who has become a “follower” of the Blog and who has left comments on the wargaming sites on the internet. It really is great to hear from people about their experiences of terrain building, particularly regarding terrain from the Great War. Anyway, on with the Blog....

I mentioned at the start of the Blog that we wanted to create the maximum flexibility in our terrain design. Sometimes this won’t always be possible. There might be that scenario which calls for a bunker to be deposited in that odd location on the board, or that shell-shattered wood in just the oddest of positions. But there may be other times that you just know that you want to build in a bunker or a gun position somewhere on the board, but you simply don’t want it there all the time.

Now don’t get me wrong. Of course you can just drop bunkers or strongpoints on the boards anywhere. I’m definitely not the sort of person who would ever think badly of anyone who did that. Quite the contrary, I do it all the time myself. But for the Great War Trench Terrain, I wanted to try and integrate these terrain items into the boards, making them a real feature of the terrain and something which looked as realistic as possible. My reasoning was that since I was trying to create the trenches dug into the terrain, i thought it would be consistent to try and do the same with the other terrain features.

I tried to go about doing this in two ways....

First, for the smaller bunkers which were a feature of the German Stellung in the Late War period, I created an area which could serve as an MG pit. Perhaps this was an old crater in the line which has been reinforced, or perhaps this was a deliberately reinforced area from which a machine gun firing on a fixed line could be situated. I made the proportions of the pit fairly square so I could also slot a small bunker on top of the pit. I also used the Styrofoam cut away from the main board as a base for the small bunker. This enabled me to make sure that the Bunker could be effectively “slotted” in place and would not move during the game.

Here’s a few photos of the pit being created, with some 28mm figures added for scale. I’ve tried to show how the Styrofoam cut away forms the base of the bunker to be placed on top of the pit. 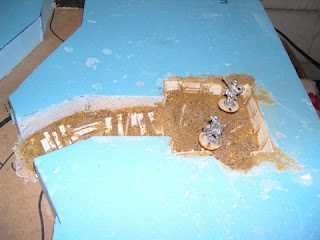 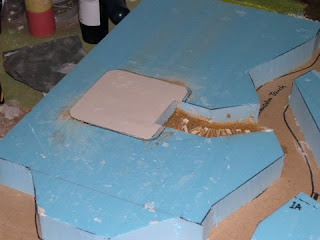 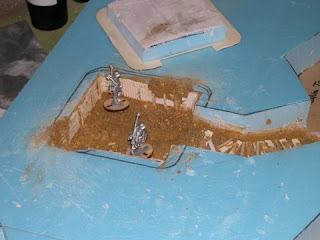 Here’s another shot of the bunker in action, painted and finished with some camo netting and flock and positioned on top of the MG pit. The battle scene is from Crisis 2009. Hopefully you can get an idea of how the bunker can in some games be used to reinforce a flank (here of a village), or a trench support line. Or, if you prefer, the bunker can be removed and the defenders left with a weaker position. 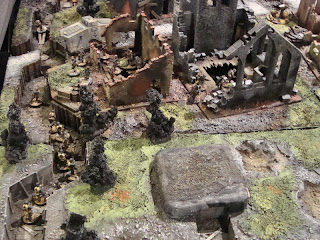 Second, I tried to use the same general principle for creating “segments” to drop into the game boards. This takes a bit more work but in my view is really worth it and adds tremendously to the flexibility of the boards. On the first rank of "No-Man's Land" Trench Boards, I created whole sections which are cut out from the Styrofoam and can be dropped in place. So, when the board is used as no-man’s-land, the dropped segment is a reinforced crater for the attacker’s jump off point. However, when the board is reversed it can be sued as as a rear rank board behind the support trench, with the shell crater segment removed and a segment dropped in place representing a field gun position, a bunker, a casualty clearing station or an anti-aircraft MG mounting.

Here's a picture of the shell crater on one of the rear boards being made. 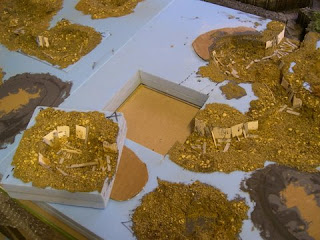 Next, a close-up of the finished shell crater segement in position "slotted" into the Terrain Board. The rubble in the crater was built up using builder's sand (a coarse, rough sand with numerous small pebbles, and fine talus. The "wood planking" is thick-ish cardboard, and the "corrugated iron" is actually corrugated cardboard. I wanted to try and create a different effect for the trenches leading into the shell craters, suggesting that they'd been hastily sapped forward by engineers... 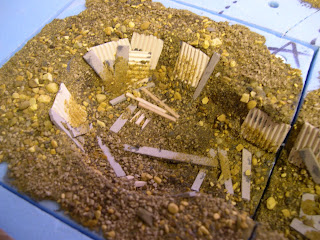 And then a picture of the Royal Surreys preparing to leave that shell crater during one of the practice games before the Salute 2009 show. 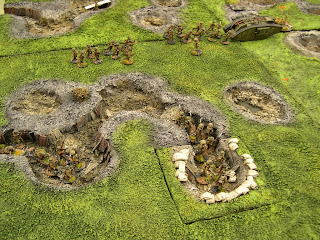 And here's another shot, this time of all the Trench Boards we made for Salute 2009. You can see the three crater segments in each of the Trench Boards nearest the camera - each crater in the segment is surrounded by sandbags and improvised revetting using wooden boards and corrugated iron brought forward in the saps by the field engineers. You can also see how we used these boards as "jump off" saps for the attacker, with some sections with rifle grenades and some command elements being left in the saps as the lead sections close into an assault. 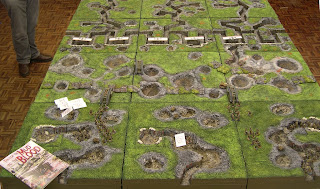 Designing each segment to drop in is good fun, and adds a lot of variety while still being integrated into the terrain. By designing and building different segements you get the maximum use out of the terrain, enhancing flexibility and preserving the effect of features being built into the terrain and not just placed on top of it.

Sometimes the segment can be a mini- terrain feature in this own right, such as this destroyed German MG position I made for our wooded “Copse 125” Terrain Boards. 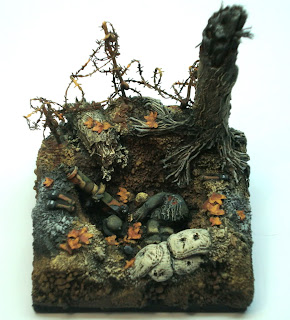 Posted by Sidney Roundwood at 10:24