I’ve finally got round to painting the four tanks from “B” Battalion of the Tank Corps from 1917. It was a long haul, but that project’s now finished. I’ve added some of the work-in-progress photos as a sort of “I did it my way” blog post, together with some shots of the finished tanks and their crews. 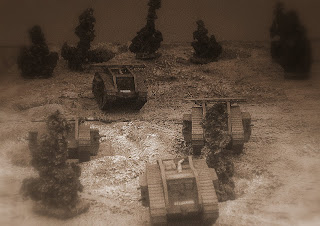 I’d undercoated the tanks in black, and started with a base coat of Vallejo about 75% burnt umber with 25% black. I then shaded a little more black into the mix to paint in the shadows under the sponsons in particular. 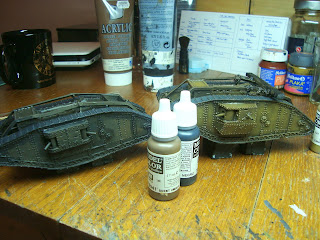 I was aiming for the type of colours featured in the Osprey “Mark IV” book, in particular the image of Deborah (D51) from the battle of Cambrai. 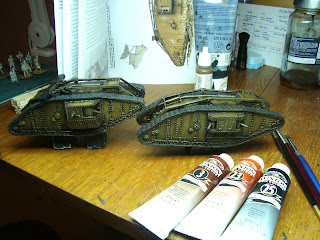 On a couple of the tanks, I added some fine sand to the tracks. On one female tank, “Banshee”, I added sand on every track plate, trying to recreate the look of a tank which had been churning its tracks in thick mud. As Second Lieutenant Wilfred Bion recalled of the conditions in the Ypres Salient for tanks in 1917, “We travelled literally one foot to each revolution of the tracks”. 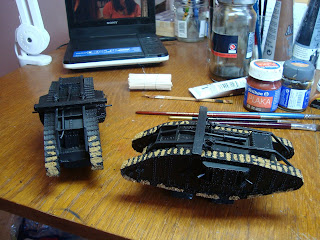 When the PVA glue and sand mix was dry, I painted it a black/ dark brown mix. 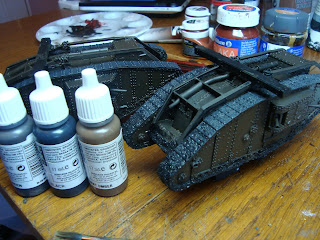 I then dry brushed lightly along all the tank panels, bringing out the rivets and armour plating with progressively lighter colours. I used Vallejo English Uniform as the highlight to Burnt Umber. 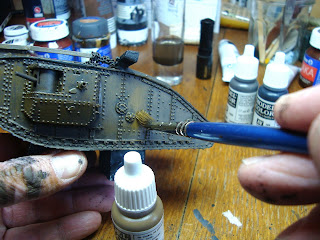 After the dry-brushing and a heavy dry-brush of grey on the tracks, I got to this stage. 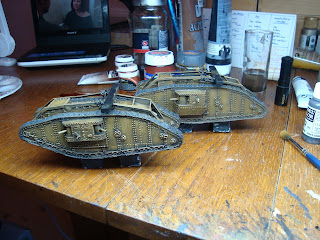 Then, back to an old tried-and-tested Forgeworld technique of flicking a mixture of dark red/dark brown oil paint heavily diluted with turpentine onto the tank, simulating rust, dirt and caked on mud. I then ran a clean brush with turpentine over the resulting splodges. 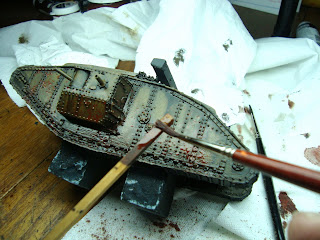 I wanted these tanks to look like they had seen action, so some oil and grease streaks were added on the sides, and thinned with more turpentine on a clean brush. I was trying to recreate the thoughts of Colonel Bertie Stern, one of the directors of tank manufacture in the Great War, when he said that people needed to bear in mind that the first tanks were not precision motor cars, but were more similar to agricultural machinery. 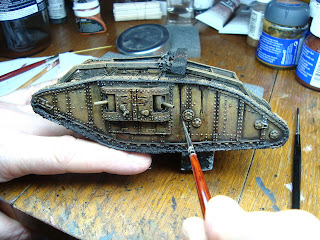 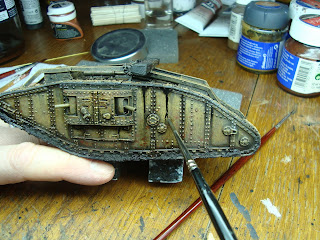 I added some MIG standard rust weathering powders to the exhaust.... 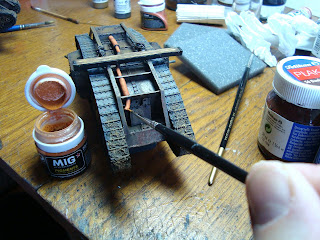 ....and dry-brushed the chains on the ditching bar with first dark brown, then a Vallejo gunmetal/ black mix, adding some rust weathering powder as well mixed with a water based fixative from Plaka. 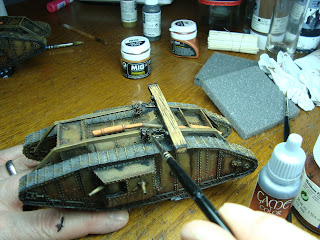 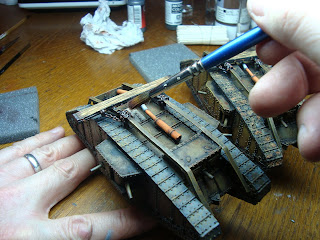 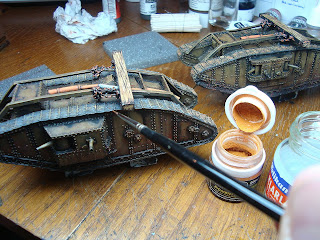 I used some Archer Dry Transfers for the battalion numbers on the tanks, rubbing them on with a soft pencil, then buffing with a Q-Tip. 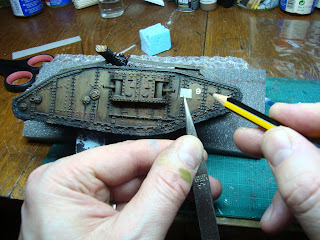 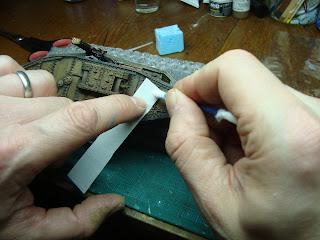 So that the transfers did not look too pristine, I weathered them as well with some more of the red brown/brown turpentine splatter, and some more oil/ grease streaks.

Although I found the Archer Dry Transfers very easy to apply to the flat surfaces of the sides of the tanks, I found it really, really difficult to work the Archer Dry Transfer lettering for the tanks’ names onto the front armour of the tanks just under the viewing portholes. In the end I gave up and painted freehand, reasoning that quite a few of the names painted on the tanks were done free-hand by the tank crews in a variety of lettering anyway. I weathered the tanks’ names like the numbering using the same methods as above. 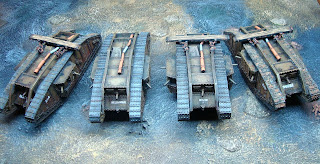 I added a Webley .455 pistol being brandished out of a pistol loophole by one of the tank crew. I was quite intrigued to read that tank crews could, and did, fairly frequently deploy revolvers through pistol loopholes, particularly against an enemy close assaulting a tank. There’s one chilling extract from Captain Daniel Hickey’s autobiographical account of his service in the Tank Corps which deals with the use of a pistol loophole to deal with a German solder near the tank and suspect of feigning death: “I took a look through the front revolver loophole in the left sponson. The man was elderly, short and thickly set. He was lying in front of the tank and almost on his face. His short, thick neck was wrinkled and weather beaten. I closed the flap and the report of Hardy’s revolver ended the incident.”(Daniel Hickey, “Rolling into Action” page 106) 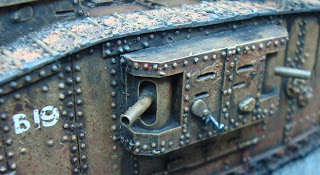 The tanks also carried carrier pigeons but “only to be used in an emergency”. Here’s one flying off from “Belladonna” (B8). 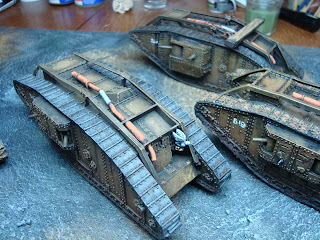 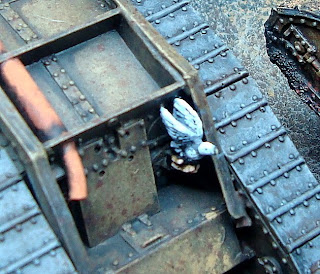 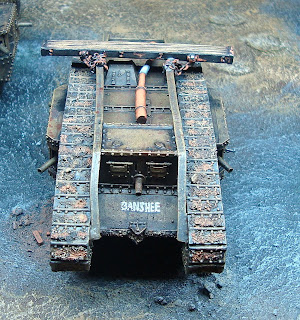 and the male “Black Prince II”, both of which fought at Cambrai. 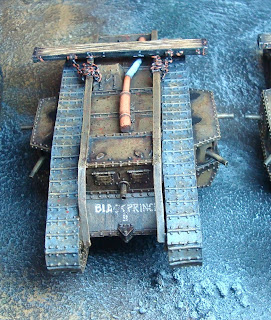 And here's the completed “band of Brigands” from “B” Battalion, 1st Tank Brigade, Tank Corps, 1917, together with some photos from the tanks in action in a game this weekend. 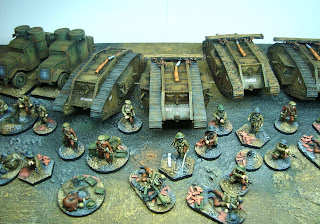 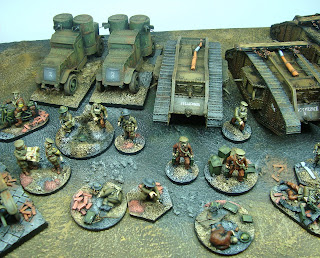 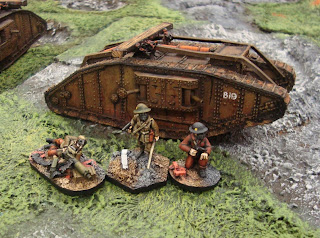 And, finally, the image of a section commander leading his "diamond" of four tanks forward under enemy fire through the battlefields of France and Flanders will be a memory from my reading about the Tank Corps which will stay with me for a long time... 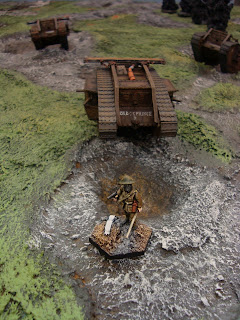 Posted by Sidney Roundwood at 16:02