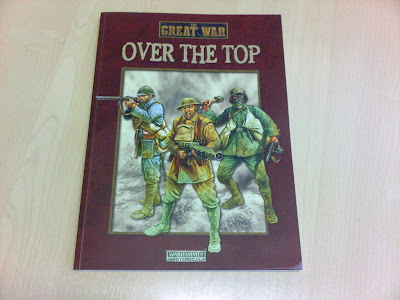 Nevertheless, I was excited to see that the chaps at Forgeworld had decided to publish the “Over the Top” supplement. While I have some favourite rule-sets for wargaming the First World War, I’m always open to new ideas and on the look out for inspiration.

So what follows is not an analysis of the detailed rules in the book or a guide of how to win with certain armies. I’ll leave that for people who are more familiar with the intricacies of “The Great War” rules. What I thought might be of interest is a quick run through of what’s in the book, the new armies presented and some of the very nice features which are included.

“Over the Top” weighs in at a very respectable 176 pages, costing £20 (plus £3 shipping if you get it from Forgeworld in the UK). It’s a handsomely produced volume, standing the same size and in the same paperback format at “The Great War”. The two books look very well side-by-side on a bookshelf. 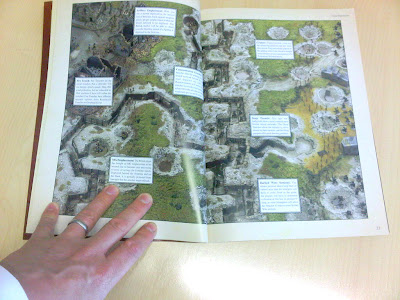 “Over the Top” is profusely illustrated, featuring a fine Peter Dennis front and back cover, numerous photos of wargames figures and tanks (eye-candy of the highest order) and quite a few photos of authentic or high quality replica Great War soldier’s equipment, weapons and kit.

In all, “Over the Top” is a splendid looking book, which will give a lot of pleasure (as with other Warhammer Historical books) from just flicking through the pages.

There are a wealth of contents in the book, enough to keep any gamer happy for a considerable time. The book starts with a contents page and fine foreword by the author, Alex Buchel. One thing which comes through the book at all times is the depth of knowledge, interest and sheer passion for the period which Alex has.

After the contents, there’s an “Overview of the Trench Wars” and excellent section of additional rules entitled “A Symphony of Hell”, covering heavy artillery barrages. Following (creeping?) close behind there is a section entitled “Grand Manoeuvres”, which covers the anatomy of No–Mans Land, trench fortifications, trench fighting stratagems, and tactics. 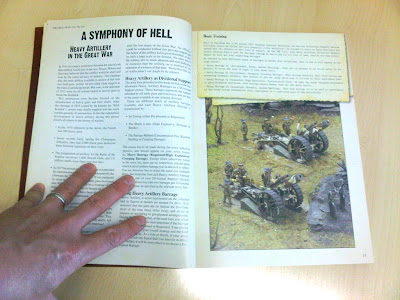 This is a really excellent section, building on the excellent work done in some of the Games Workshop 40K special releases like “Cities of Death” (for the stratagems). Indeed, for a 40K player looking for more than the rather dull trench fighting scenario in last year’s 40K “Battle Missions” book, there’s a huge amount of useful information in “Over the Top” which could be imported into the 41st Millennium. There are also six new missions included in “Over the Top” (Village Assault, Stalemate, Fighting Retreat, Conquest, Meat Grinder and The Assault), plus a larger scaled game entitled “The Big Show”.

Reading through these various fortifications, stratagems and game tweaks made me think that “Over the Top” is very likely to really open up wargaming using “The Great War” rules. While it preserves the adversarial, non-umpired, point-system approach, the “Over the Top” rules for fortifications and stratagems seem likely to create a really finely balanced game in which both sides have a range of game options.

The book carries on with a section called “Battlefield Operations”, listing 12 notable offensives and battles of the War and suggestions on playing these. I liked this section as it places the context of games using “Over the Top” squarely into a historical context.

Following on are new army lists for American, British and Imperial, French and German forces, each of which adding something new beyond what was in the army lists in “the Great War”. Although I’ve only given these a quick read through, the lists look interesting, with the German Sturmpioniere, Landsturm and Musketen-Battalion options for some of the 1915 and 1916 units looking particularly fun. 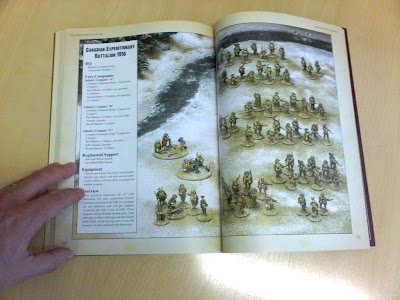 There’s also a fearsome photograph of a French tank company featuring no less than nineteen FT-17s which no doubt kept someone very busy painting for a while. I am sure that there is some room for discussion on some of the historical formations and weaponry used (a very minor example being that German infantry suffer Tank Terror in 1917 including at Cambrai, despite German forces having seen tanks being used extensively earlier in 1917 at Arras, in Flanders and on the Champagne front), but the same is certainly true of most historical rules and supplements, including anything written by myself!

Finally, there is an “Army Intelligence” section in which there’s a set of rules for Trench Raiding with small forces, some painting information and a Resources section.

“Over the Top” is another of the very respectable stable of wargaming books featuring sumptuous photography and very high production quality. There have been some very interesting discussions on TMP about whether people look for this in a book, or whether they prefer something which is plainer.

Personally, I like photos in the rulesets which I purchase. I generally think that for every time I play one of the “glossy” rulesets, I probably end up looking through the pages at the photos half a dozen times. My copy of the Warlord Games “Black Powder” rules is a case in point – played once, but looked through dozens of times in awe and admiration.

In the same way, “Over the Top” features some great photos of Western Front wargames, with the wonderful Partizan 2008 display table by Dave Andrews and Ally Morrison (which inspired my own terrain back in early 2009) featuring prominently. I would be very surprised if anyone enjoying the photos in “The Great War” would be in any way disappointed with the photos in “Over the Top”. 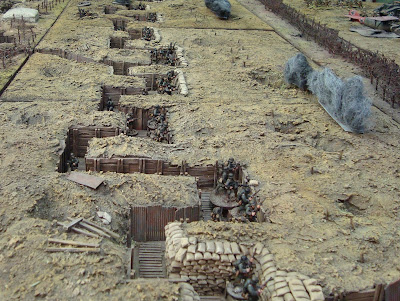 One very minor disappointment is that the terrific table built by the Gripping Beast/ Woodbine Design team for “Over the Top” doesn’t feature more prominently. I had the pleasure of seeing this at the Scarab/ Gripping Beast games day in December 2009, and it really was fantastic. So, I thought I would post my own pictures of that table as a bit of “Over the Top” eye-candy on this Blog post, with all the credit to the table builder Wynn Rogers and the Gripping Beast team who helped. 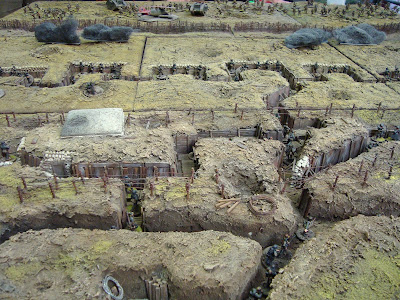 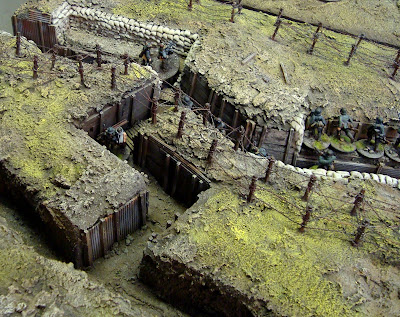 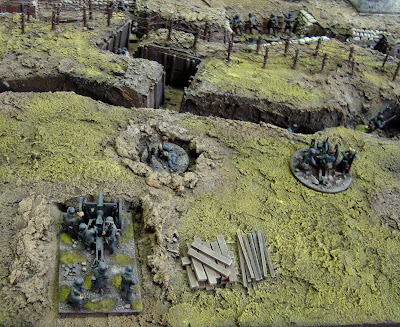 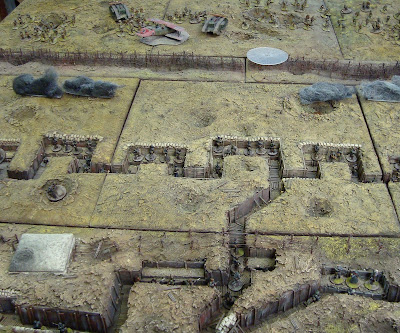 I enjoyed reading through “Over the Top” this weekend. It is a handsomely produced, visually stunning supplement in the fine tradition of Warhammer Historical supplements. On first impressions, it sits very well alongside other Warhammer Historical classics such as "Age of Arthur" and "Shieldwall". I am sure anyone enjoying “The Great War” will get a lot of use out of it, but there is more than enough of interest for gamers using other rules to enjoy.

At the heart of the book is a really interesting approach to creating historically accurate, interesting, respectful and fun wargames set on the Western Front. If that was the author’s intention, then I’d say he has succeeded in full.

Posted by Sidney Roundwood at 13:31