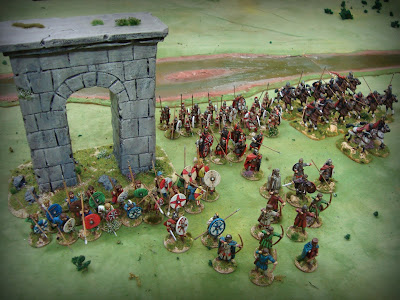 In the Year of Our Lord 452 A.D. there came a terrible host of Saxons from their lands to the south, sailing up the River Colne from the Great River. They were led by a leader, Sidic, the wolf of the southern strands and notorious seafarer of the Grey Waters.

In Sidic’s host was a champion, Wulfstan, who the men of Verulamium greatly feared for he was cruel and mighty. Sooner would his flesh become food for ravens than he would approach an altar and bow before our True Lord. 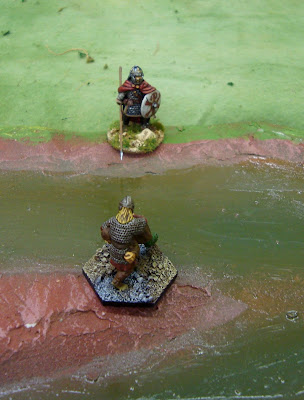 Before the gates of Verulamium the host of Sidic stopped. The walls remained after the Romans had left. This masonry was still wondrous; fates had not yet broken it. The works of giants had not yet decayed. Under the columns stood the leader of Verulamium, Maxim Boice. Armed he was in the noisy combat. Amber wreaths encircled his brow and a purple cloak comforted his shoulders. Large was his retinue, the men of Verulamium, laughing as they moved, although fearful of a gloomy disaster before the Saxon foes. 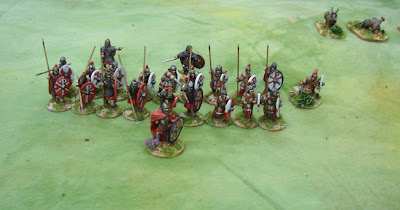 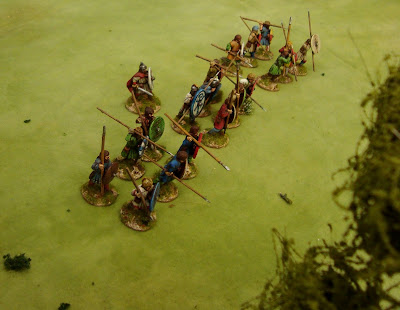 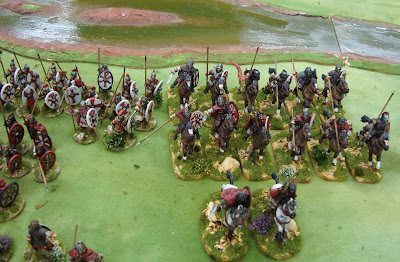 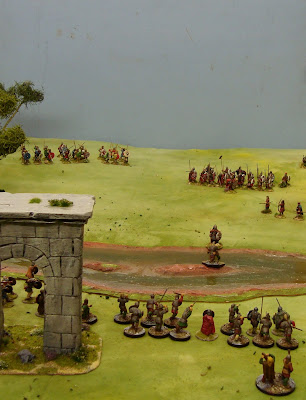 Great was the quantity of spears who watched Wulfstan ford the dark waters of the Colne, preparing food for the ravens, slaughtering as he stalked. Splintering the shield of his enemies, women wept as he passed. None in the Verulamium host could stop him until a soldier of Britain, Mullard ap Artur shattered his shield. 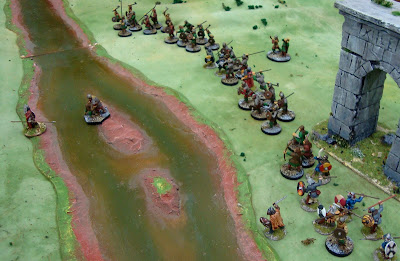 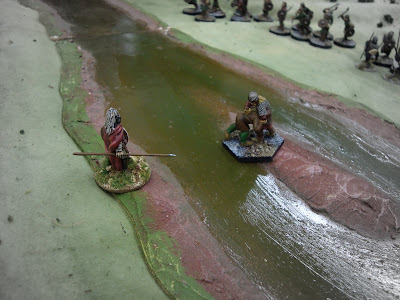 There was food for ravens, and for the raven there was profit as Wulfstan fell in the Colne, his head severed by Mullard ap Artur’s sword. Furious were the Saxons. To drinking of mead they fell in gloomy despair. Black fury became anger as the words of their fell priest came to their ears 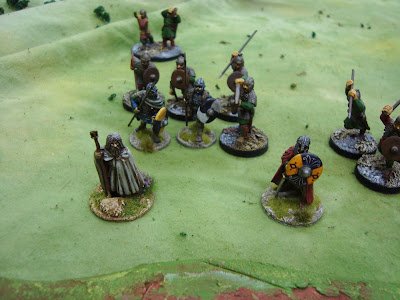 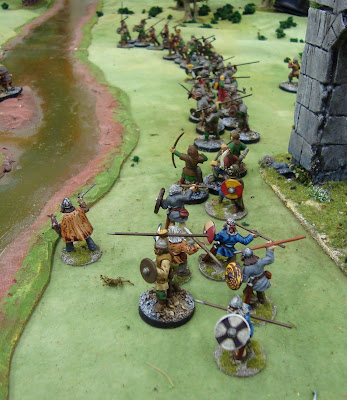 Silent the men of Verulamium watched. Of their leader, Maxim Boice came little but words of high pitch, reedy and soft. His words of battle were lost as the sound of Saxon arrows filled the air on eagles feathers, keening for prey. 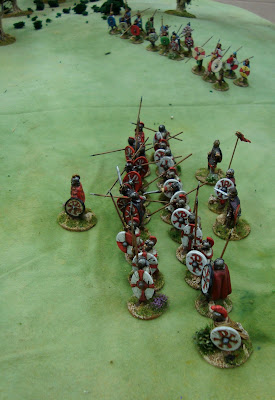 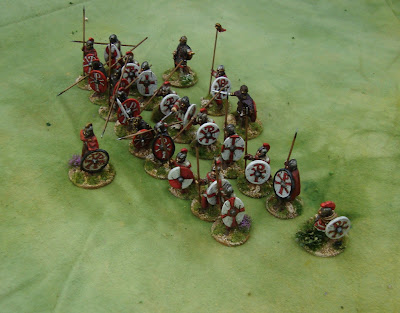 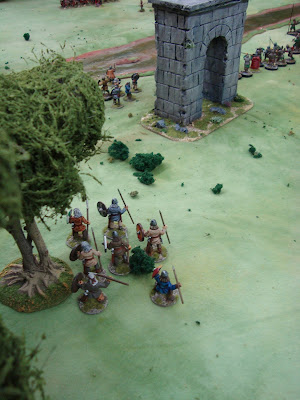 Battle-mad with the death of Wulfstan burning their eyes, Sidic’s host marched with speed, regaled with mead; great was their design. Retreat was their poison, battle their desire. No mother’s son nurses them. 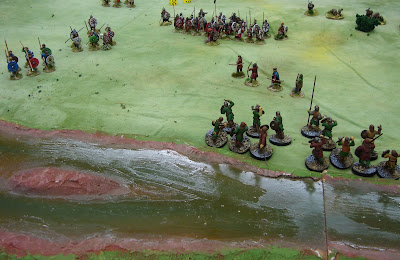 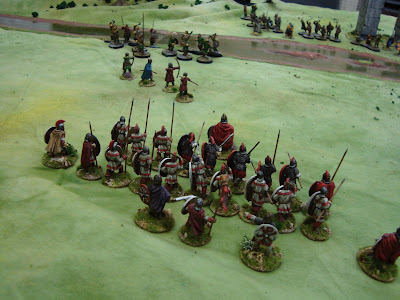 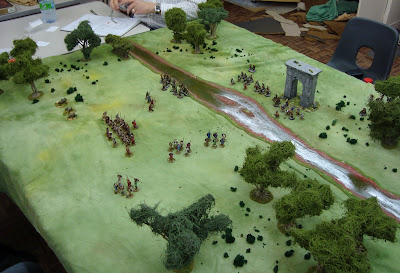 A conflict on all sides befell the bitter field. Saxon and Briton fell together in violent slaughter. Punishment the Saxons sought on their enemies, but the wall of shields of Maxim Boice stood fast. Sword and spear shattered upon wood and iron. 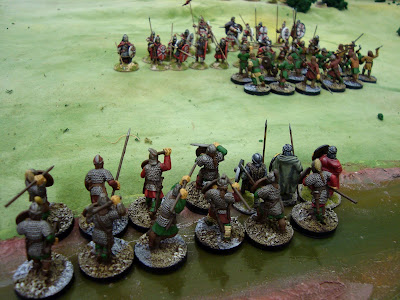 A violent thane, Brytnoth the Saxon, led his men first, eager in battle with eyes of a serpent. Under the helmet of his terror, his men died impaled on bright spears. 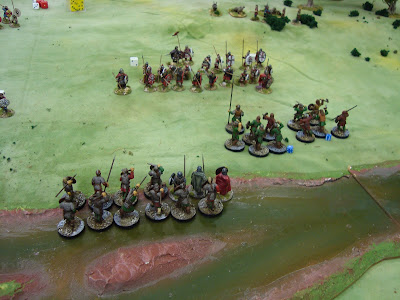 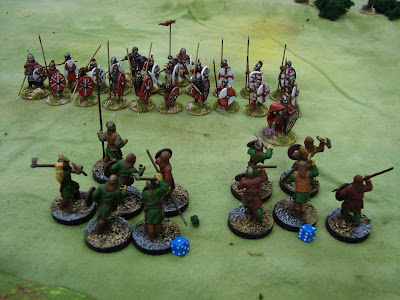 Sidic came to his aid, blood draped his cloak from many winters of fighting. With a bold shout he pierced the wall of Maxim Boice, the lion of Verulamium. 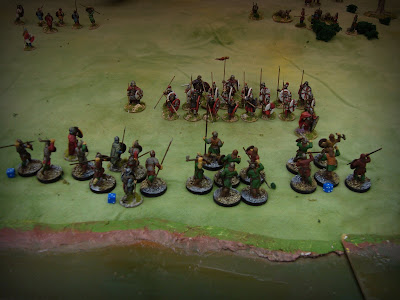 Blessed conqueror, Maxim Boice, of temper mild, the bone of the people, with his battle streamer displayed was victorious. There was grief and sorrow upon the Saxons as they went back to their boats. Those boat pirates who meddled with the mane of a lion did not return until the next summer.

So, there you have it. One of the forgotten battles of the Anglo-Saxon Chronicle recreated in all its glory at the Fleetville Community Centre, St Albans, England last night. It was the first game my local wargames club has done set in the Dark Ages and it was really entertaining. Especially fun was the way in which each side's forces had to be inspired to take the field through a mixture of excessive alcohol, the revealing of good (or bad) omens and through encouraging (or, as proved to be the case from Maxim Boice, downright awful) speeches.

It’s much too early to say much about the rules we were using ... writing as we went along ... , but the Venerable Bede would have no doubt been rather bemused.

Lard-Thane, Richard Clarke, has also posted a far more erudite look at the challenges and rewards of wargaming Dark Age England at Lard Island News. For those interested in the period, I highly recommend you have a read at Richard's blogpost here.

We’ve scheduled a follow up game for next week in 453 A.D., so stay tuned!
Posted by Sidney Roundwood at 09:22