Like all play-tests, we spent a little too long trying to remember some of the less used rules in "Through the Mud and the Blood".  It's funny what you forget when you haven't played a set of rules for a few months!  I chatted for some time with the other players about how they found the balance between the sides, the precise force compositions needed for the games and the victory conditions.  A couple of the players kindly agreed to pretend to be completely new to the wargaming hobby and ask difficult question (bless 'em!) - all very useful preparation for the weekend!

All in all, I was pleased that we'd run through the game as it's highlighted some things Richard and I need to remember when umpiring, and has allowed us to make a few small tweaks to the forces available. 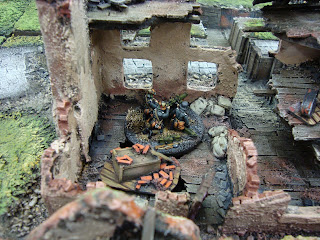 Here's a few snaps which I managed to take of the very early stages of the game.  I'm deliberately trying to give nothing about what happens next!  First, the initial British force from 9th Battalion of the Duke of Wellington's Regiment, and their Big Man "character cards". 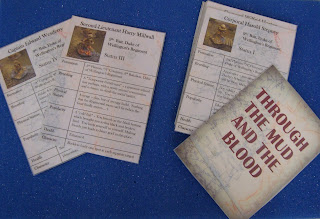 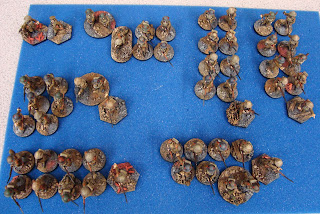 Then the table viewed from the British side … 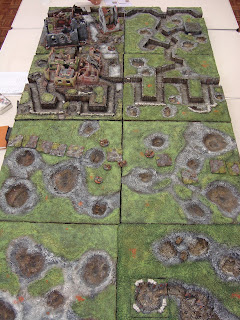 … and the German side 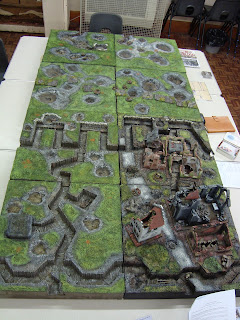 A picture of a British infantry section cautiously advancing, and then the view from the perspective of No. 4 Section, 1st Company, "B" Battalion of the Tank Corps 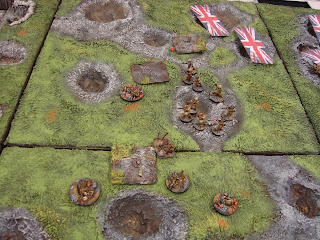 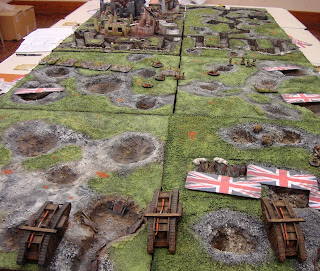 And finally, just one of the things which just might be waiting for the British assault battalion in the German fortified village of Etaing - amidst the rusting bath-tubs and broken furniture a German MG08 heavy machine gun. 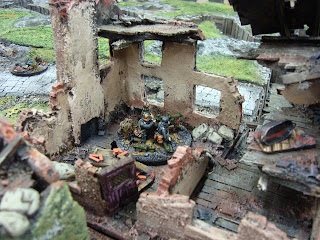 I've not much to do to the game before the weekend, just finishing a couple of figures and a couple of finishing touches to one of the buildings.  One thing I thought you may enjoy is the background hand-out for the game, which I've posted as a document on the right hand side of this blog under "Playtest Scenarios and Campaign Dairies".  It's nothing very grand, but it gives a bit of context for the participation game.  I'll post the full scenario, briefing notes, OOBs, special rules and victory conditions after Sunday.

Hope to see some of you over the weekend!
Posted by Sidney Roundwood at 21:32