Second Lieutenant Sandy St Clair looked at his watch. He’d given up believing the time shown on the watch-face two days after D-Day. It was his nerves making him look. He knew that. But he couldn’t stop twisting his wrist and staring at the monochrome dial he’d bought in Bow Lane a lifetime ago. Each time he looked, he felt as if it was more of a wrench to look away and remind himself where he was.

He could taste the battle in his mouth. His face was inches away from the dry earth, body flattened hard against the Normandy ground. His tongue registered the dirt and soil on his lips, mixed with the smoke and stench of a day old battle. Somewhere in his mouth was the tang of burnt scorched metal from the German tank left in flames half a mile back. It mixed in an unholy cocktail at the back of his throat with the charred, blackened, half-nightmare smell of the bodies in the ditch a few yards from his side. 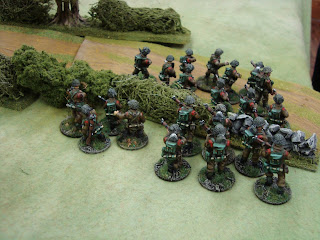 How could half a minute have passed so fast?

He felt the whisper at his side of his platoon sergeant, fingers jabbing forward up the road, the jingle-jangle of his platoon’s equipment deafening after the few minutes silence. Crouching, then moving, head down, his legs felt like stone as he rose and walked to the hill crest overlooking the Church his platoon scouts had located twenty minutes earlier. Why wasn’t it marked on the map? Where on earth was he anyway? Nothing seemed to make sense in the close hedgerow terrain. He looked at his watch again.

And he looked at it again, just one more time. 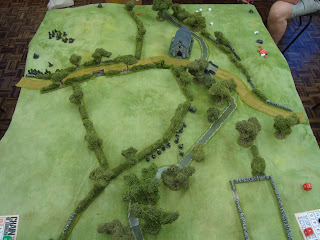 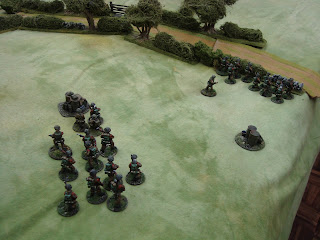 He was sweating in the dusk sunlight, now watching the church from the hill-crest through the cloud of mayflies above the ripening barley. He could see ghosts in the hedgerows. They were wearing field-grey tunics and camouflaged clothing. 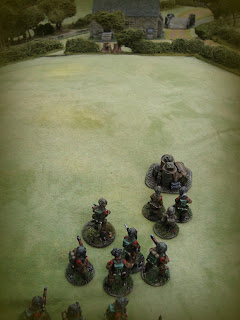 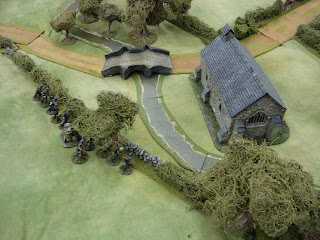 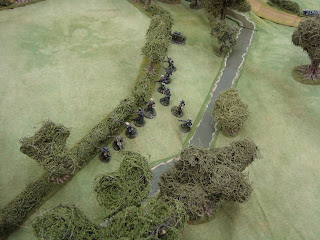 “Now in my dial of glass appears


the soldier who is going to die.


He smiles, and moves about in ways
his mother knows, habits of his.
The wires touch his face: I cry
NOW. Death, like a familiar, hears”

He watched the other section of his platoon spreading across the road, and looked back to his men, following. Looking at him. Looking to him. He waved the Bren team to the front, hands working urgently. He caught a glimpse of the time on his wrist. He felt he had to look again, quickly, and check just one last time, watching the second dial moving. He resisted the urge, crouched down and signalled to the mortar crew. He checked his watch again as the first smoke round fell in front of the Church. The second hand on the monochrome dial had hardly moved. 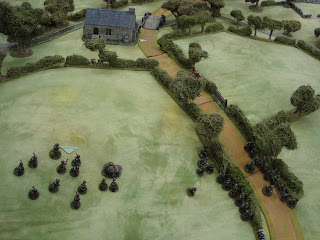 His head was screaming, filled with the evil chatter of the Bren team’s gun ripping and wickering into the stone wall of the Church, smashing the Gothic window. He saw the stained glass break but never heard it smash. He was too busy running for the hedge. He was screaming as he lunged into the thick, wiry, clawing brambles and gorse, his hand pinned almost in front of his face. The first thing he saw was his watch face. He wasn't sure of whether his watch was just there, co-incidentally, in front of his face or whether he had been frantically searching for it.  Another 15 seconds gone. 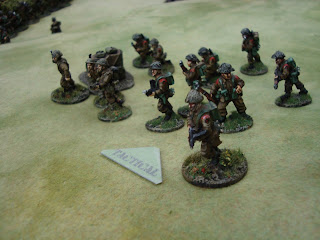 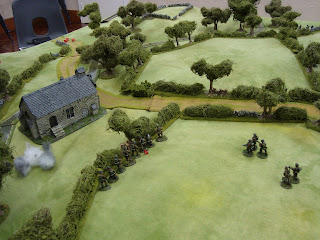 He’d shouted himself hoarse by the time he’d seen the section creeping towards the hill-crest of the neighbouring hill. Stalking, slowly, up the chalk down. 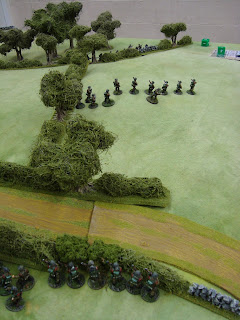 He had more to look at to his front, as he watched keenly, eyes streaming from the smoke falling all the time from the mortar around the church. Were They still in there? Were They even there at all? His head was pounding and he looked at this watch again. 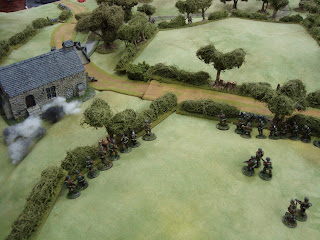 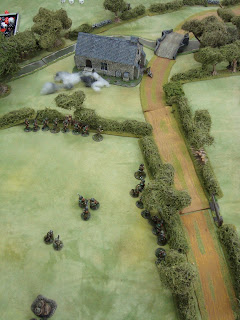 He looked at his watch again.  Something inside him squealed and wanted to tear his hand off and the watch with it. He looked up.

He saw the section still crawling, crouching, moving on the other hill. What was on the other side? The map was useless now, and he could see nothing through the field glasses. Lenses held to his eyes, a world of grey mist and chemical smoke. He wished he was there in that grey world of fog and shadow, or anywhere, rather than here. 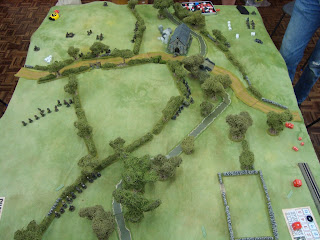 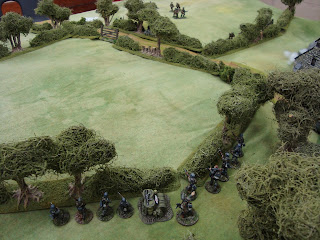 He heard the ambush on the neighbouring hill, rather than seeing it. The sound of the MG42 tearing through the hillside was almost as distinctive as the sounds of the German hand grenades. He waved frantically at his Bren team to change targets, hoping they could see the Enemy. 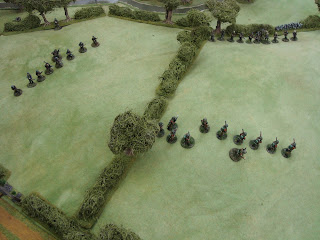 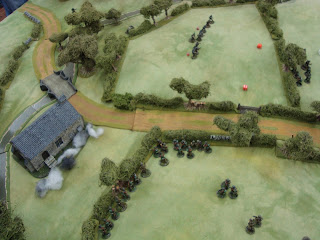 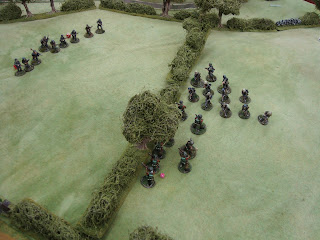 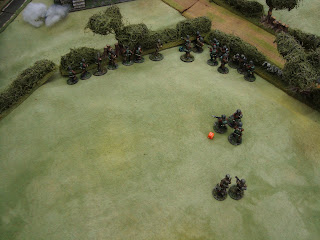 He noticed his field glasses were shaking as he watched the remnants of the broken German section running for cover before more chemical smoke drifted across the lenses and made him retch. Was it just the smoke which was making him retch? What was wrong with him? 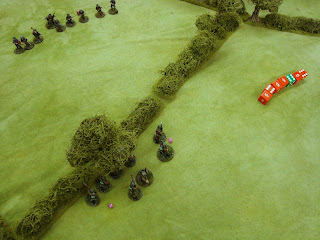 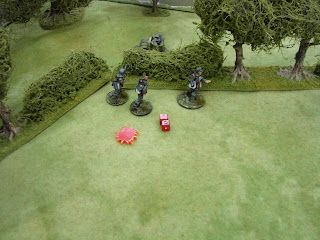 He checked his watch again. His hand was still shaking. He signalled for the Bren team to cease fire at the Church. And waited.

He watched the second hand on the monochrome dial crawl around the watch-face as the stench of battle slowly filled his mouth again.

This was the first game in our “Chain of Command” campaign set in Normandy, three weeks after D-Day. The game was taken from the Chain of Command rules, being the Patrol Scenario in which two small forces probe against each other’s front lines. it was a tight, hard game, fought cagily between the two sides. I tried, with Big Al as the other British leader, to keep in mind the fire & movement tactics of the infantry training manuals Richard had passed to me a couple of weeks ago. But sometimes, ambushes are hard to spot! We had the dice on our side in the main firefight, with the losses inflicted on Panda's German force eventually breaking their morale and pushing the Germans back to their outpost lines.

I’ll try and post a game each week as we fight through the campaign over the next month or so. It'll be interesting to see if Lieutenant St. Clair’s nerves can hold on.

The extract from the poem is from “How to Kill” from the excellent Keith Douglas, killed in action on the 9th June 1944.
Posted by Sidney Roundwood at 13:00