I travelled up to Nottingham for Blog-Con on Saturday and I thought I’d share my thoughts on a great event and a very fine day’s gaming. 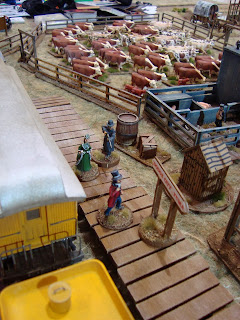 Nottingham is one of those large cities in the UK which I’ve driven past hundreds of times but which I don’t know at all well.  I had a good look at the City Centre when walking through to Foundry, where Blog Con was being staged. I came across one of those remarkable automata clocks which seemed to be an essential part of British shopping centre design in the 1970s. Slightly mad, but fun all the same. It still seemed to be drawing a big crowd, even at 9.50am on a Saturday morning. 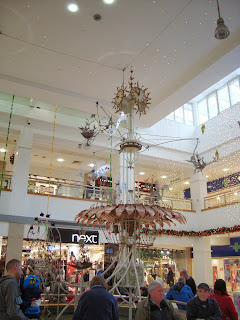 Blog-Con and Foundry turned out to be very easy to find. It was precisely as depicted on Ian’s helpful Blog-Con blog post, and only 5 minutes (if that) from the Victoria Centre. I’d estimated that about 30-35 bloggers and gamers made the journey for BLog-Con, which makes it a very respectable turn-out for a first convention.

The helpful folks at Foundry put on a great event, allowing us to make use of their great venue and fine tables, some of which were slightly insanely contoured. One chap mentioned that their photogenic properties looked great on “Midsummer Murders”, for which they were originally built, even if standing troops on them was a real challenge.

I ended up playing three very fine games on the day. One game of “Chain of Command”, and a couple of games of “Blazing Saddles”. “Chain of Command” is fast becoming one of my favourite rule-sets, and the excellent game staged by great chum and Friend-of-Lard Mike Whittaker on Saturday was no exception. 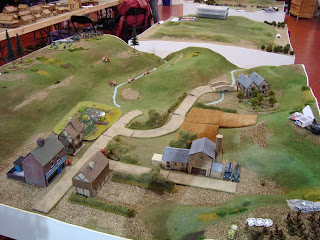 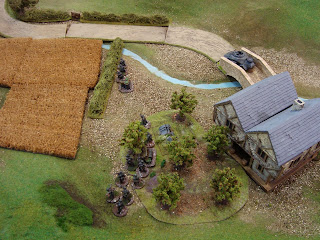 Set in a “small village on the South Downs”, it featured the Home Guard defending against a German assault from the “Crooked Billet” public house in the direction of Walmington-on-Sea. (Yes, THAT Home Guard). The German forces (commanded by yours truly) had to fight their way into the fringes of Walmington against a stout defence mounted by England’s finest (commanded by Glenn).

True to form, if not to history and accurate battlefield tactics, I decided to recce forward with my German armoured car, probing against the Home Guard and hopefully exposing their weak spots. Oh yes, it was one of those games, with more laughter, double-entendres and BBC light comedy jokes than you could shake a stick of Walmington-On-Sea pink and orange twirly rock at. 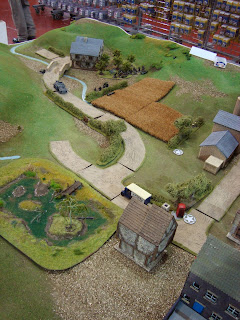 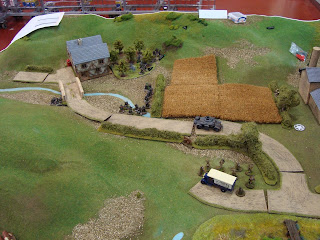 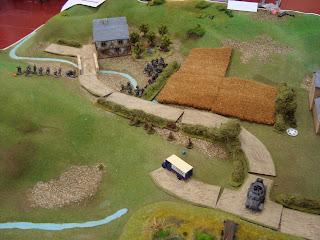 We played for well over a couple of hours, with the result being very much in the hands of the valiant Home Guard. I managed to get my armoured car destroyed in a characteristically brave assault by Sergeant Wilson, wielding his “stocky bombs” with panache. 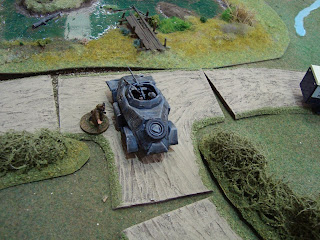 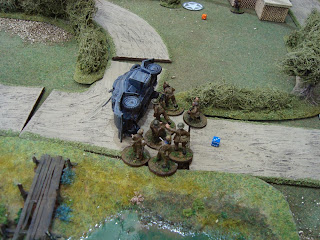 Corporal Jones died a hero’s death, defending his butcher’s van to the last. Captain Mainwaring stayed out of the thick of the action at first – clearly playing the role of orchestrating defences instead of wielding his Webley – but came good in the end with an inspired piece of loop-holing which involved exploding a cluster of hand-grenades on the south wall of Warden Hodges’ “Fruit and Vegetable Emporium”. A wonderful game, umpired with great skill by Mike, and one which saw Glenn being a very worthy winner. Great entertainment, and proof that “Chain of Command” is as a lot of fun in a wide variety of settings. 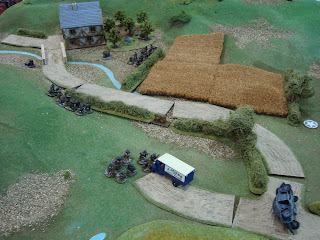 The other two games featured Dave "One Man and his Brushes" Docherty’s fantastic western town, Serenity. I spent a good half an hour soaking up the atmosphere before playing a couple of games. The details were amazing – from prospectors’ camp sites, to funeral arrangers, to a saloon (complete with card sharps and “soiled doves”, to a gun store at which you could swap your ancient single-shot rifle for a Winchester repeater. Dave had thought through everything you needed for a perfect recreation of a Western town. 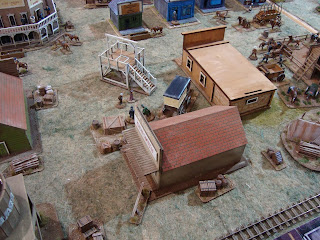 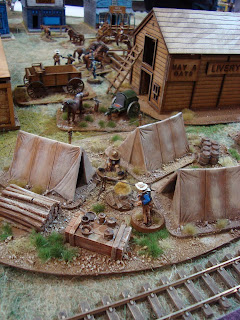 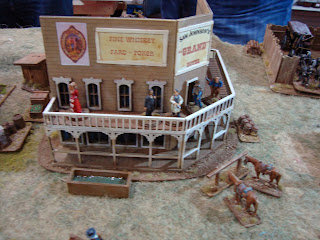 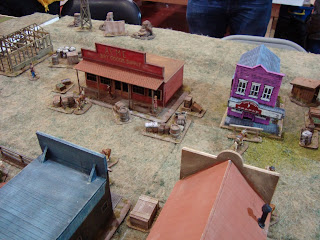 But the most wonderful of all the additions was a 28mm scale train, which in each of the games would slowly leave Serenity station on the turn of a card (after signalling departure by a couple of blasts from Engineer Jones’ whistle). I think there are two things which immeasurably improve any wargames table – boats, and a train. So, I was kind of in heaven before the first game even started. 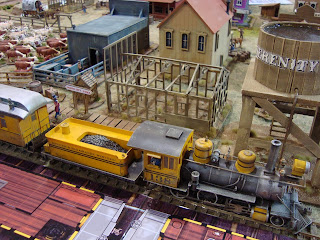 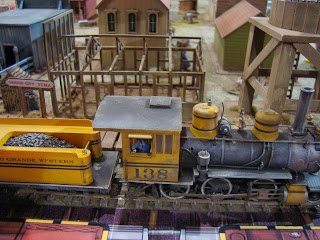 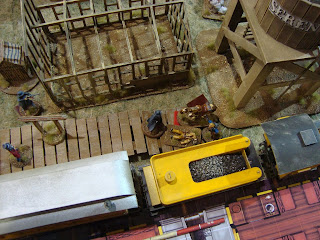 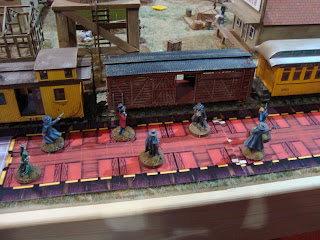 The scenario was broadly the same in both games – the villains have to rescue Johnny Ringo and get him out of Serenity on the Yuma express. Leaving at 3.10pm, no doubt. The Sherriff and his shotgun wielding deputy, Stumpy, have to stop the villains. A mob of Pinkerton Men is on hand to take Johnny Ringo into their own kind of custody in Tombstone for a fat ransom. And, of course, Billy the Kid is riding through Serenity just in time to add his own brand of teenage insanity to the mix. 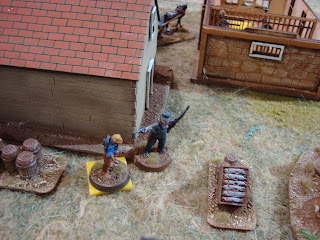 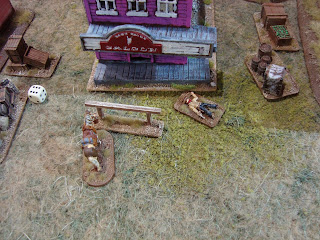 Both games were simply terrific. I played the Sherriff in one, and the Pinkerton Men in another. Suffice to say that the first game ended with me arranging a lynching – that should persuade the Townsfolk that the Sherriff should get elected again next year – and the second involved one of my Pinkertons running down the track after a disappearing Johnny Ringo on the train, leaving for Yuma scot-free. 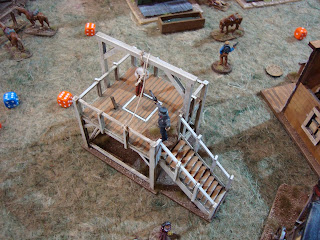 The rules, “Blazing Dice”, very generously available on Dave’s site, were perfect for a participation game. You could literally learn them in five minutes. They were card driven, with endless ability to build them out to add in new events and characters. Dave is a great umpire, and I can honestly say that if you ever get the chance to visit Serenity, you should most definitely not hesitate to give it a try.

Last, but never least, I want to say a big thank you to James, Ian, Andrew and Dave who organised Blog-Con, to Bryan and Diane for letting us play at the Foundry location, and of course to everyone else for coming (particularly to Fran and Ray for keeping me company in "The Forresters" until my own train rolled in to Nottingham).  Thanks so much to all of you! 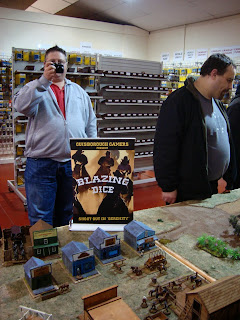 I very much hope this will be an annual event. I’ll certainly be coming next year if it is. 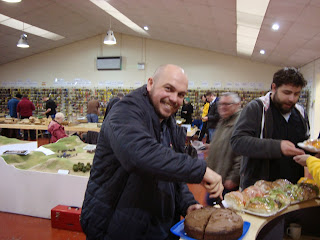 Posted by Sidney Roundwood at 16:54