The Disciples and Acolytes of "The Celestial Path" 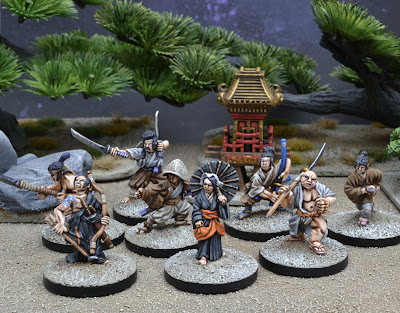 ********
The monk, Makoto, looked at both Lord and Lady Fuchida. Makotos's company of poor ronin, former retainers and impoverished tradesmen had been travelling for several days. The information that Makoto had been given was that both Lord and Lady Fuchida were keen acolytes of "The Celestial Path". Quite the fervent believers, Makoto had been told. Which was good news - as the long journey from Takasaki had sapped some of the high spirits of Makoto's company as they trudged through rain squalls and difficult terrain.
All that Makoto needed now was additional funds for food and lodging - enough to cross the palms of ferrymen, innkeepers and friendly farmers along the rest of the journey. Of course, a few extra coins would be more than helpful to persuade additional disciples to join the pilgrimage.
Makoto's eyes widened when Lord Fuchida greeted them and passed the heavy coin purse to the monk. "Thank you, my Lord. I can see you are a true believer in The Celestial Path", the monk replied gracefully.
Lord Fuchida Ichiro almost blushed, and bowed, introducing his wife. "This was very much my wife's idea. There are these fishing rights, downstream, which we have long contested are ours.." Lord Fuchida waved a hand vaguely in the direction of the dusty, earthen road leading down the valley. "Maybe", Lord Fuchida added, "..... maybe The Celestial Path can be followed in a direction which guarantees those fishing rights will be returned to the House of Fuchida?"
Lady Fuchida took one small step to her husband's side, smiled politely, and counted the swords of the disciples of The Celestial Path. There were more than enough weapons in the company to secure the fishing rights that had been stolen from the Fuchida.  And maybe 'recover' the woodlands in the valley as well....
******** 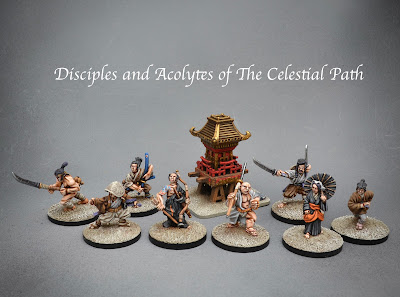 I’m very much a historical wargamer. That probably comes through loud and strong on this Blog. In recent years, I’ve loved weaving history together with a narrative which is historically plausible but also allows some creativity. The characters, timeline and precise locations are fictional, but the engagements, skirmishes and battles which the characters fight are consistent with those of their historical contemporaries.
I freely admit that might not be everyone’s cup of green tea, but it works for me - and, I hope, for you. A very good friend of mine said to me the other week that the historical reality Japan of the 16th and 17th centuries was quite different to what we, as wargamers and roleplayers, might understand it to have been. But in a moment of great insight, my friend then also said that it is the “otherness” of Japan which has attracted many roleplayers and wargamers to create that Japan on the tabletop.
The legend, the colour and the “otherness” of what we might understand to be Japanese culture and warfare has been the magnet which has drawn people to wargame that setting. For me, as well.  I hope that's not disrespectful of the authentic reality of historical Japan.  It's certainly not meant to be.  If anything, it hopefully has much in common with the Kabuki dramas and Ukiyo-e art of the nineteenth centuries, and the work of authors such as Lafcadio Hearn at the turn of the nineteenth century. And this Blog post fits into that dynamic - drawn and entranced by the “otherness” of Japan for a wargamer and roleplayer.
The figures are - with the exception of the female noblewoman - all Dixon Miniatures from Mark Copplestone’s Legends of Japan” range. These were sculpted in the late 1980s, but are still a pleasure to paint.  Lady Fuchida is an equally-lovely Perry Miniatures sculpt.  They’ll be used in our Japanese skirmish games of “When the Last Sword is Drawn’, set loosely in Tokugawa Japan. 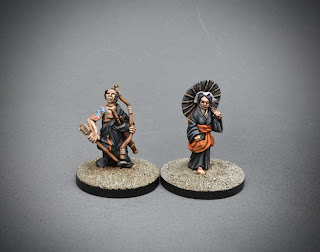 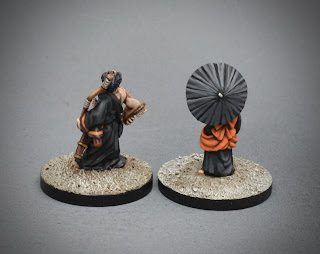 I wanted to create a company of adventurers for our skirmish games, themed around a religious purpose. So here we have seven adventurers, including a rural samurai nobleman and a monk and their portable shrine. They are adherents of “The Celestial Path”, a fictional religious group themed around the various collections of religious fanatics wandering Japan both in the Sengoku Jidai (the Age of the Country at War), and afterwards.
I painted the figures with a limited palate. I used Vallejo Sky Grey, Dark Grey, Medium Grey and US Field Drab as the base colours. These themed well together, and were complimentary. I tried to add a splash of suitably-Buddhist orange - even if just an emblem, sash or set of prayer beads - onto each figure. This hopefully brings the company together, along with the colour scheme. I painted the samurai in black - no doubt an expensive cloth, but a sombre colour as befits members of the samurai class following The Celestial Path. I did make sure to add some item of orange clothing or pattern on both of the nobles, just to keep the theme going. 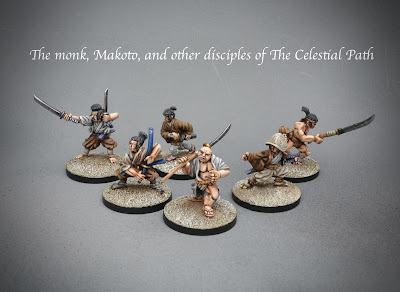 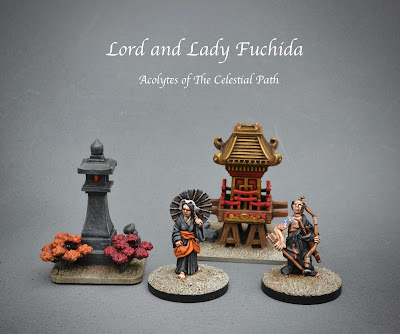 But what is The Celestial Path I hear you ask? In game background terms, it's a good background for an unusual religious group. Historically, religious groups such as the Ikko-ikki were the inspiration for The Celestial Pat. The Ikko-ikki were the product of various populist movements arising in and around the Oni Rebellion. The principles of self-determination taught by the Oni spread widely among the population of central Japan, with the most extreme members of the group insisting that each individual had the right to their own expression of reality. In that regard, maybe the acolytes and disciples of the Celestial Path are seeking their expression of reality in following the stars in the heavens, from adventure to adventure. 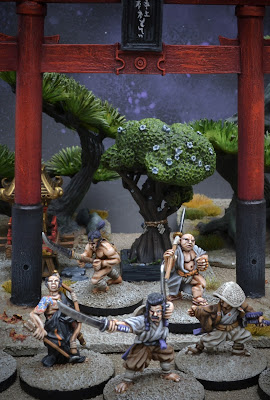 And to do this, I needed a ‘Path’ for the acolytes and disciples to follow. In wargaming terms, I wanted this to be a map, with various destinations for the players to follow in a small mini-campaign. Tracing the campaign along a heavily wooded valley - complete with hamlets, a small monastery, several shrines and culminating in a fortified samurai’s house - gave me the ‘Path’ I was looking for. I prepared the map earlier this month and finished it with some watercolours last weekend. 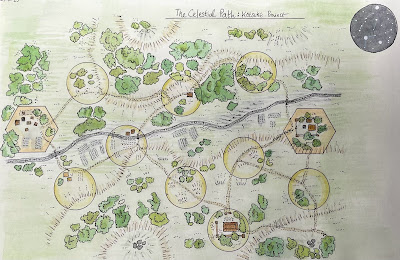 The circles on the map can serve as encounters for the acolytes and disciples to survive and endure. For those successfully completing the Path, a suitable reward can await them. 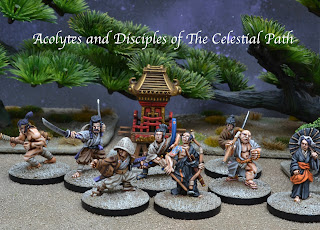 I hope to add destinations from The Celestial Path in future posts.  So... stay tuned and watch the stars, Dear Readers.
********
Posted by Sidney Roundwood at 12:14

Email ThisBlogThis!Share to TwitterShare to FacebookShare to Pinterest
Labels: Japanese wargames, The Celestial Path, When the Last Sword is Drawn, With Flashing Blades