I finished off the "Winter Sports"/ No Man's Land free-standing trench terrain board late last night, after what seemed like an eternity of dry-brushing! I found it very difficult to get the board finished quite as I wanted, and I thought I’d pass on a few of the (hard and bitter) lessons I have learnt!

To start off with, here’s the finished board... 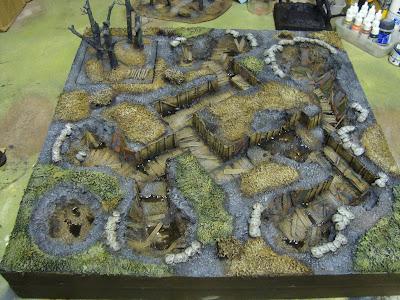 That doesn’t seem too difficult, does it – “how on earth was that so difficult”, I hear you ask. Well, I don’t quite know what went wrong, but here’s some clues.

1. Don’t just have a starting Plan – remember to make notes as you go along.

One of my big problems in painting the free-standing trench board was that I’d finished the Glasgow Copse/ Wood board the weekend before without making any notes about which paints I’d used. This shouldn’t have been a problem, except that I had about three different grey paints and two different brown paints and I tend to mix them all together to get the right shade. I thought the Wood looked about right, but (DOH!) I had forgotten to note down how I had got the colours I aws happy with. For a good couple of hours on Friday evening and yesterday morning, nothing I mixed was looking right.

I’d started from this point... 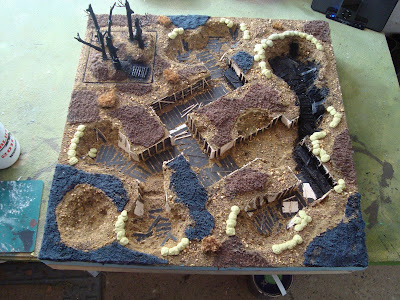 ..and finally got to about this point after much bad language, bitter regret and bashing of my head against an invisible wall. 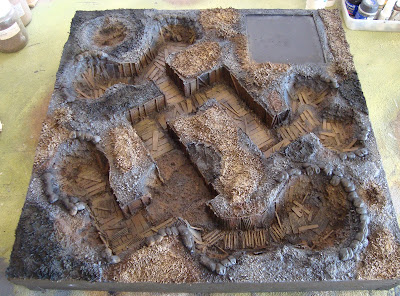 So, Lesson Number 1 for me to take away is – don’t just make a starting plan – remember to make a few notes as I go along.

2. Try something different now and again

These were the 17th and 18th terrain boards I’ve done for the St Albans TooFatLardies’ Great War project. So I should have a clue what I am doing by now. However, I’d noticed in some of the other trench boards that the corners of the trenches and the base of the trench walls were not – how can I say this – grubby enough. They looked a bit clean. I’d had no success trying to paint a water-based dark brown or black into the nooks, crannies, crevises, gaps of the trenches. The paint just didn’t seem to flow into the spaces until I switched to a very dark brown enamel paint/ white spirit mix, which flowed in nicely. 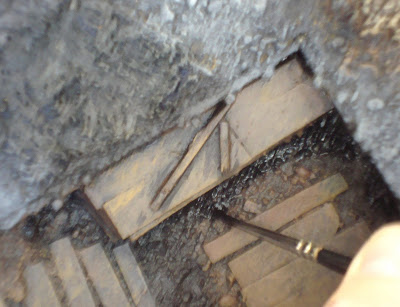 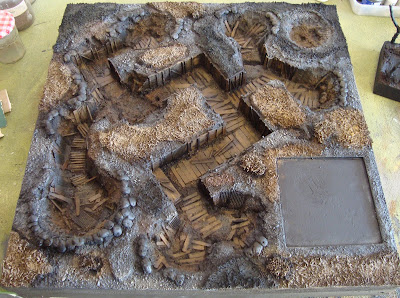 It’s the first time I’ve used spirit based paints on a terrain board and I liked the result. Lesson Number 2 for me to try and remember - Try something different now and again: Don’t just stick to what’s worked before.

3. See the world from a different angle

After what seemed like hours of dry-brushing of the trenches and surrounding ground, I wanted to try and paint some of the detail in the trenches like the corrugated iron (made out of corrugated card), broken duckboards (made out of artists mounting boards) and old ammunition boxes. This called for a much more delicate approach than I like to use for terrain, and was well-nigh impossible until I tilted the base completely on it’s side allowing me to get to the details I wanted. Lesson Number 3 – I need to remember to see the terrain from a different angle if I get stuck.

Here’s a picture, taken from one of those odd angles made possible by the terrain board being at a 90 degree angle. 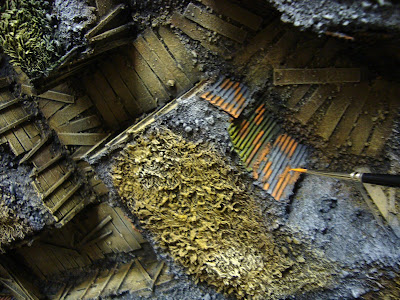 Finally, late last night (and after three bottles of Hoegaarden and a pretty good episode of Wallander on BBC3), I decided to add in some water effects. The product I like to use is called Solid Water, a two part clear exopy (two parts resin, one part hardener) which dries rock hard and is very durable. It looks good when it’s dried, although it does take a considerable time to dry or “cure” – I’m not sure what the right phrase is. 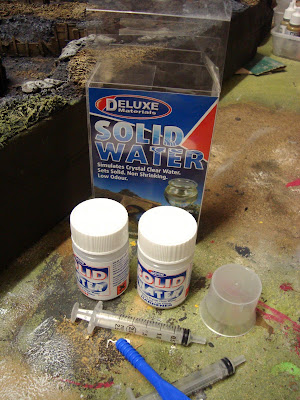 I’ve used it before, no problem, but last night it just seemed to be a lot more tricky to use. I blame the Hoegaarden! The Solid Water has to be mixed, and the syringes which come with the product only allow you mix quite small amounts. I seemed to managed to get as much of the resin and hardener on my hands as in the tiny mixing dish which comes in the box. When I finally got the resin and hardener mixed, I dropped and lost the syringe with which the water can be placed precisely on the terrain - and had to hunt for an old one.

Anyway, I finally got to the point of mixing the “water” with some dark, smoky Vallejo paint (Vallejo Black/Russian Green/ Green-Brown mix), stirring the paint slowly into the mixed “water”. Another helpful tip for me to remember – never, never, never use a brush for this which you love and treasure, as the mixed “water” will utterly destroy it. How many decent brushes did I ruin last night thinking I could clean them perfectly later? Only three, thanks for asking!

The mixture, looking suitably dark and muddy with the Vallejo paint added, is then slowly injected (trying to avoid air bubbles) into anywhere you want the water to be on the terrain board – shell craters, broken parts of the trench where the duckboards have come away, or by the side of the duckboards. This was actually a fun part of the terrain finishing, working out where the “water” looked best. 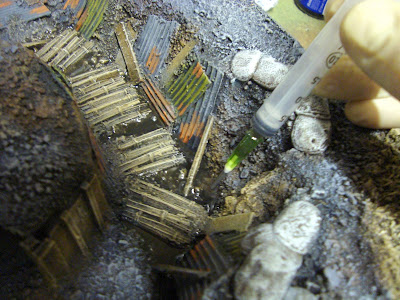 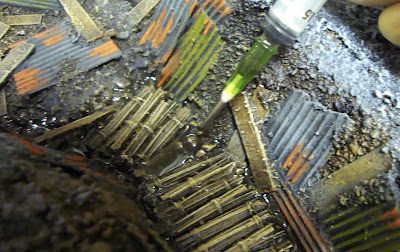 Each packet of Solid Water gives you enough for about 80-100ml of mixed “water”, so there should be more than enough for a 2 x 2 foot terrain board, unless you’re trying to model the Pripet Marshes or the Grimpen Mire. One handy tip to remember is to keep a spirit measure handy. My guess was that the table I use for modelling was dead level, but it was good to have a spirit measure to hand to prove this. When the Solid Water dries/ cures, it really isn’t coming off, so its best to check everything is level first. It’s then best left for 24 – 48 hours to set hard. 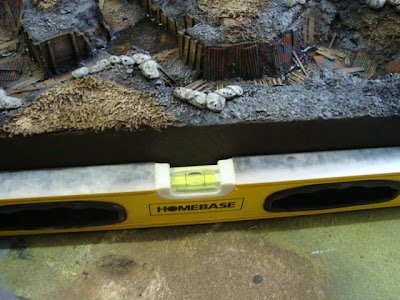 So, here’s the final free-standing terrain base taken from directly above so you can see the trench layout, with another photo of the Glasgow Copse base along-side. In the end, I thought that the bases when placed together looked OK – not ideal, but passable. 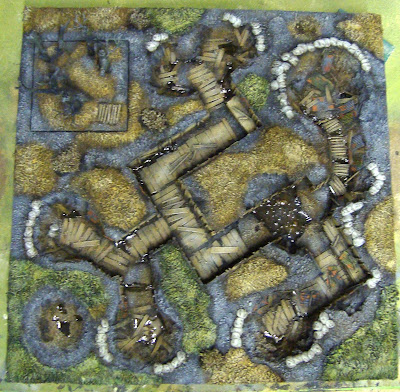 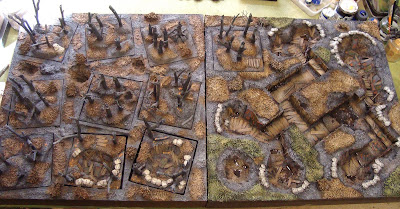 All that’s left is to finish the inserts for Glasgow Copse and paint up some of the detritus and paraphernalia for the trenches generally. Oh, and of course to take them to the club for a game on Tuesday night! 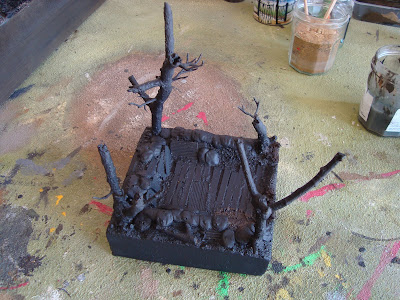 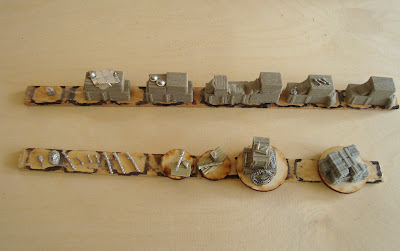 Posted by Sidney Roundwood at 14:34