We’re in the finishing straight now. I spent an hour yesterday and about another 90 minutes this morning finishing the figures off. They’re now done apart from varnishing and basing the company command group. Which is a relief as I want to use them in a game on this coming Tuesday, 6th December. 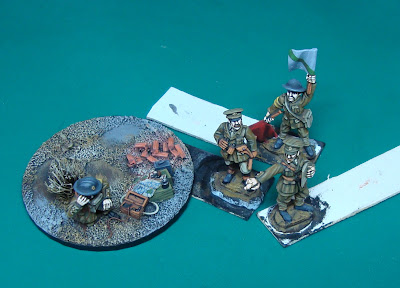 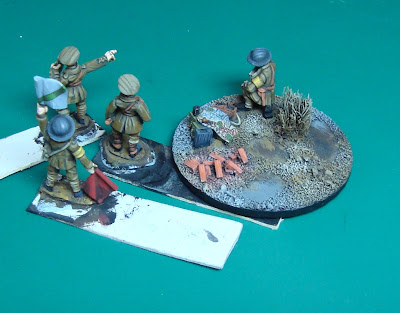 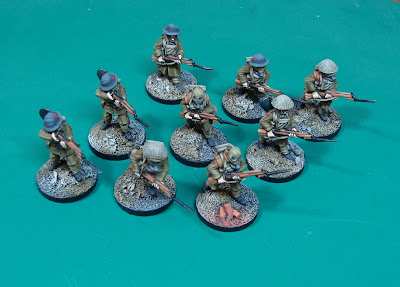 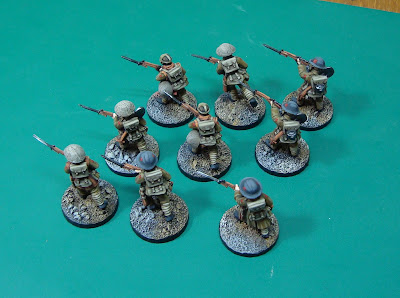 I added some miscellaneous Vallejo browns for the hair where this was visible under the helmet. And I painted a pair of eyes on the Artillery Liaison officer, as well as finishing off his compass, field telephone and boxes of spares. 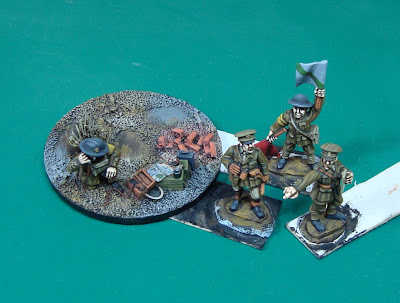 I like to paint a black edge around the wooden base of the figures. I think that finishes them off, and forms a break between the figure and the terrain. I know some people prefer to simply paint the bases brown, and I’ve tried that in the past although my preference is for the black. Either way, I like to use a different paint which is a hard wearing acrylic paint for the base edge. I like the excellent Louvre series of artists acrylics for this. They’re very reasonably priced, work well for terrain as well as base edges, and they’re very hard working even if not varnished afterwards. They also have a great “double-cream” consistency, and never seem to separate as some of the Vallejo and Plaka colours can sometimes do. I bought mine at Cornellison’s in London, but you can find them at quite a few artists’ suppliers on line. Well worth checking out for large projects or base edges.

Well, that’s just about it. I’ll post a quick photo of the finished command group over the next few days. Next up will hopefully be the introduction to a club project we’re running through December. I hope you’ll like this, not least as it should give me the chance to talk through pre-game campaigning and the cross-over with running RPG games.

Hope you can join me for that.
Posted by Sidney Roundwood at 10:57