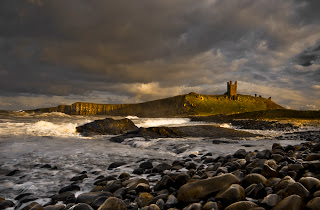 First, many apologies for the shortage of posts over the last couple of weeks after our trip to Bovington 2012. Life caught up with me, my work became frantic and I went on holiday for two weeks! While I’ve tried to keep up with everyone else’s activities in the Blogosphere, I’ve been neglecting my own contribution – which I hope will be only a temporary lapse!

Following the fine examples of many of you, I took a modelling toolkit on holiday with me and a couple of dozen figures. However, the cottage we were staying in was rather smart and I was a little nervous that the owners may not take too kindly to me gouging holes in their table with a mis-deployed scalpel blade. This disincentivised me somewhat from doing much modelling. Not that I really needed an excuse, as the fantastic views over the Northumbrian coastline where we were staying and some good bottles of wine in the evening were the kiss of death for the holiday modelling project!

It was therefore good to be back home from a hobby perspective at least and I’ve something planned for the rest of the summer which I hope to post soon.

Until then, let me leave you with some shots of some flammenwerfer flames which I put together in the week before I went on holiday These are certainly not new – I’m sure you’ve seen this sort of thing before. They were a lot of fun to do and making them was very simple and inexpensive.

Simply use some “hot glue” from a hot glue gun to stick a selection of clump foliage on some wire. The length of wire can vary with the length of the flame you’re trying to recreate. You can opt for dark green foliage and then spray it black, but I wanted something a bit more fiery – flames, remember? So I opted for autumn clump foliage in a variety of yellow, orange, brown and red. 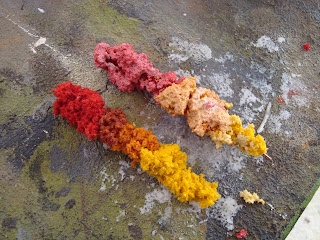 Once the “hot glue” has dried, simply dip the whole of the wire “flame” into a pot of PVA white glue. This is messy, so be warned - the glue seems to get everywhere. Don’t dilute the PVA – keep it neat. At first you think it’s a disaster and there’s too much glue and the flame is ruined. But persevere, mes braves, as the glue will dry clear and hard, making the delicate clump foliage hard and tough – ideal for clumsy fingered wargamers to use, in other words. 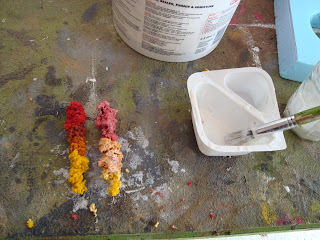 You’ll see I first tried to paint on the PVA, but it’s an even messier and less successful way of doing it. So I’d advocate the dunking method and give the paintbrush a rest for the PVA stage.

When dry, I touched up the flames with some suitably coloured paints, trying to blend the different explosive colours into each other and take away some of the “clumpiness” of the flame. I also highlighted the red foliage to make it a little less, well, electric red! 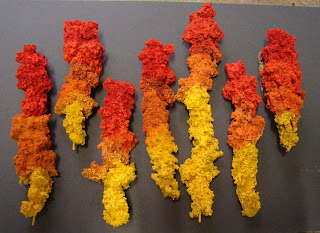 Then, I sprayed the whole of each flame with a matt varnish spray (the PVA glue tends to dry to a sheen). Once done, add some black spray paint at one end and….hey presto….you’re done. 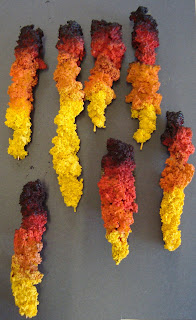 In an attempt to be dramatic, I did have visions of keeping the flames in an old black cardboard box which had been lying around the garage for a while. It seemed somehow more appropriate than a zip lock plastic bag, but that’s just me! 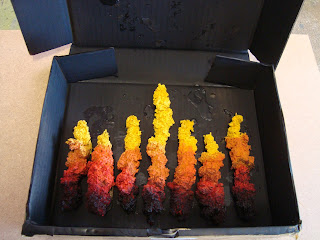 It’s easy to make a few of these at the same time and no doubt the same technique can be used for a whole host of explosions. Inspired by this tremendous post by Airhead at Take The High Ground, I’ve got a burning desire to try and create some shrapnel explosions, “Jack Johnsons”, “Coalboxes” and “Woolly Bears”.

Posted by Sidney Roundwood at 10:17