Sometimes the battlefield seemed empty to Second Lieutenant Sandy St Clair. If not silent, or still, then waiting. Like a cold, dark river on an early autumn morning in Perthshire, a lifetime ago. Before. The. War. A different life, a different world. 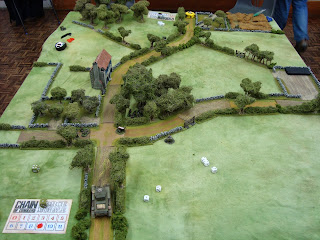 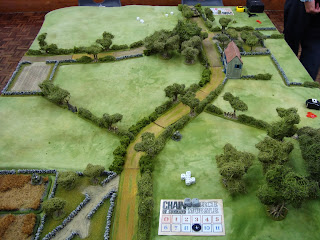 Unlike the heather clad glen and nearby pine woods of his Uncle's estate in Scotland, the hill before him stank. A crop of bloated dead cattle filled the fields, a harvest of splintered iron shells having scythed them down before his platoon arrived.

The smell of their carcasses made him retch. It was all he could do to train his field glasses on the stone walls which led to the Enemy's main defence line. Not silent, not still, but waiting.

He was holding his nerve. People were pleased with him. His platoon had been fighting well. The scrappy, yellow paper scrawled with his Colonel's commendation was fast turning a smudged, mottled black as he fingered it repeatedly in his pocket. Words on a paper letter. Not much to cling to, but better than a vague, random hope he'd pull through.

He could feel the sweat leeching slowly around his thick woollen collar. He checked his watch. He'd been in the farmhouse with a section for five minutes now. Nothing to see in the fields. He'd tried. His eyes ached. He couldn't even see the swarms of flies glutting themselves on the slaughtered cattle. He could tell the Bren gunners were edgy as well, one of them rubbing the edge of the spare magazine like a child's toy. 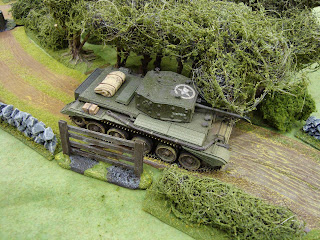 He felt the rumble of the Cromwell before he saw or heard it. He'd waved it along the side road as he'd approached the house, hoping that it would have a decent field of fire to the north of the farm.

Sergeant McKie's section was moving up to the south. Pin, Pivot, Punch. Concentrate. Try and remember, just try and remember. They're all counting on you. He searched his watch's face, suddenly nervous.  He thought it had stopped and then watched the hands slowly moving.  Playing tricks again.  He always knew that some seconds lasted longer than others. Another ten seconds nearer The End. 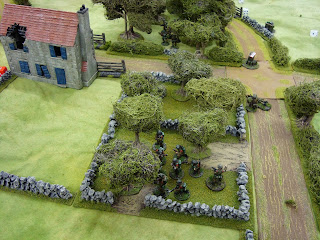 Then it started. Automatic weapons, machine guns, mortars, the rasp of chemical smoke in the back of his throat, the brick splinters spraying from the walls under fire, the screams and the shouting, the thud of artillery support strolling closer, killing almost casually. Obliteration at less than 2 feet away. 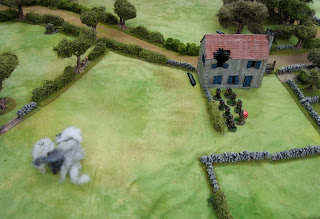 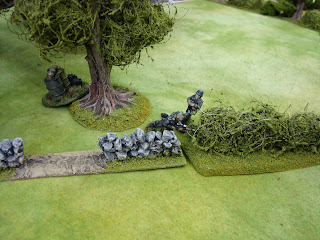 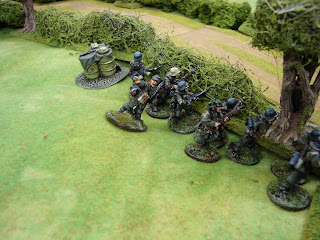 The Bren gunner almost growled as he was shot. The upstairs window had given a perfect field of fire, and offered a perfect target. Before he could grab the gun, a second man was shot, the stock now slick scarlet with their conjoined blood. He was waving for McKie's section to leave the field, find cover. The enemy fire was ferocious. Somehow he still managed to shout orders, his feet unable to move, his hand slashed by a brick splinter from the window. He knew he was shouting as much out of anger as fear. 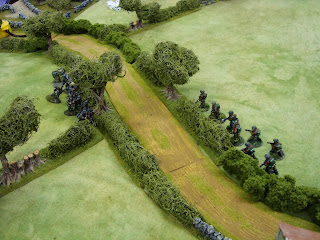 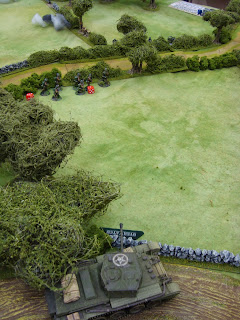 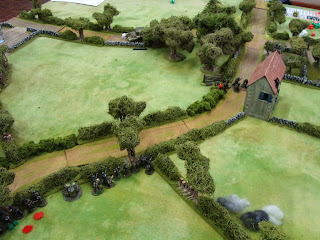 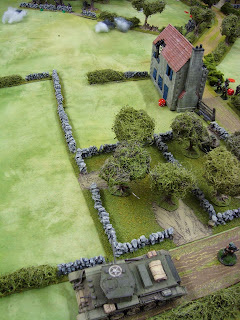 The rumble got louder. At first he thought that Evans had ploughed the tank into the farm. Everything shook. A picture fell from the wall and he realised for a half-second someone had lived here. A bedroom overlooking a field, by an orchard. Someone had slept, been happy here. Now it was a morgue. 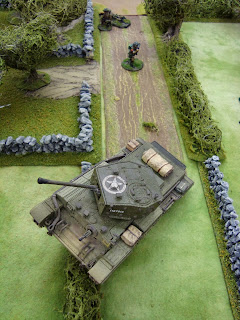 He heard the crash as the Cromwell ploughed a furrow through the stone wall to the south of the farm, the sound of wrenched, scraped, metal screeched insistently in his head and refused to stop. The tank had bogged. The Enemy had gone. It was suddenly over. The ghosts of their feldgrau and camouflaged smocks vanishing in the smoke, leaving him with the dead, the blood and the finally silent room.

The third game in out Chain of Command campaign saw the British assault on Hill 113 bog down as miserably as Sergeant Evans' attempt to cross the Normandy stone wall into "Les Trois Vaches" farm.

Although the British has a full platoon and a Cromwell tank in support, making progress against a German platoon and a fine defensive position can still be hard work.  The luck favoured both sides fairly easily, but the British assault was broken eventually by the inability of the Cromwell to effectively fire on the German defenders on account of the smoke liberally peppering the battlefield from the British 2" mortars!  A salutary lesson for any would-be Royal Engineers on a wargames table!

The game was a lot of fun, and as we're playing through Richard's campaign supplement we're finding quite a few things developing.  First, both sides are more cautious in approaching defensive positions, mainly out of respect for the effect of bi-pod mounted machine guns in strong positions.  Second, both sides are probing first and hitting once the enemy are discovered - we're trying to follow the tactics laid down in the military manuals of the time (thoughtfully supplied by Richard to the players).  Third, some of the characters formerly thought of as utter duds are coming good.  To my amazement, Second Lieutenant St Clair is finding his feet in the campaign - which is a great pleasure considering he was first rolled up to test the effect of a "shell-shock rule"!

The campaign supplement is developing well.  The initial focus on trying to create a combat stress, or "shell-shock" effect is evolving into a much more interesting character development track.  more of that on Lard Island News HERE.

At the same time, there are, of course, inevitable twists of fate.  Panda's dice rolling continues top be a thing of wonderment, as you can see here. 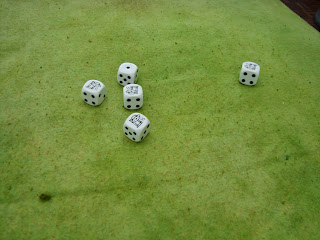 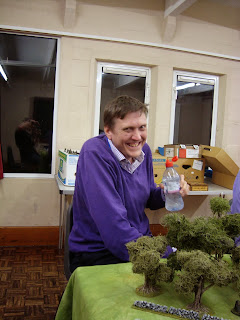 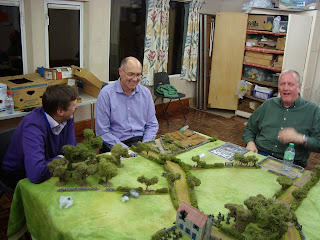 Even the best laid schemes can "gang aft agley", no doubt as Second Lieutenant's Uncle would have told him in that cold, dark salmon-empty Perthshire river in that lifetime before the War.
Posted by Sidney Roundwood at 11:34