"...nothing but going hunting and dancing in ballets": French Commanders and Royal Favourites from 1688

Upon the dancing banners of the French" 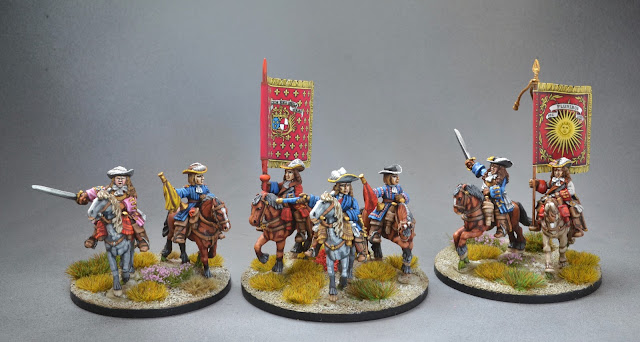 During September last year, I painted up some of the command figures for my French army which will, eventually, take the Field against their Flemish and Spanish adversaries in the 1688 campaign for the (fictional, and deeply self-indulgent) Free-City of Laarden.
Command figures are, frankly, a bit of an indulgence.  They take up a disproportionate amount of space on the wargaming battlefield for the commanders concerned - who in the late seventeenth century rarely had a "staff" in a modern sense.  Commanders such as these might also be an eye-catching addition on the tabletop - but perhaps they distract from the more prosaic, and perhaps more professional, business of logistics, war finance and the physical geography of the battlefield.
But .... who cares, mes braves?  They're French, and fashionable, and ludicrously indulgent.  So here, on Roundwood's World, we're spending a Blog post concentrating on pink satin jackets and ostrich feathers.  Somehow, I doubt you'll surprised, dear readers. 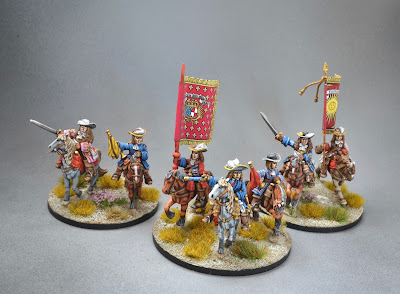 In the centre of the above photograph is the personage of Louis de Crévant, Duke of Humières and Marshal of France.   De Crévant is a historical commander, who was granted the Marshal's baton in 1668 after the War of Devolution, and was one of the French commanders in the Nine Years War.  Prestigious, wealthy and well-connected, I thought he was an ideal choice for a tabletop commander - less well-known than his rival, the Duc de Luxembourg, but a valid historical commander for us to place into an alt-historical campaign.
As befitted any Marshal of France, de Crévant hailed from an impressive ancestral chateau (at Azay-le-Ferron, in the image below).  And tbelow is de Crévant's portrait - as aristocratic a portrait one can hope to find of any French commander, I'm sure you'll agree. 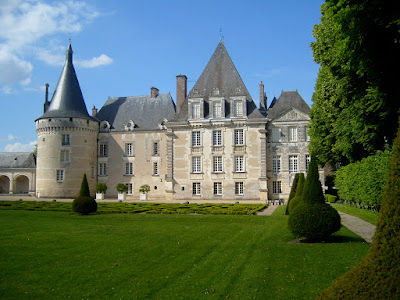 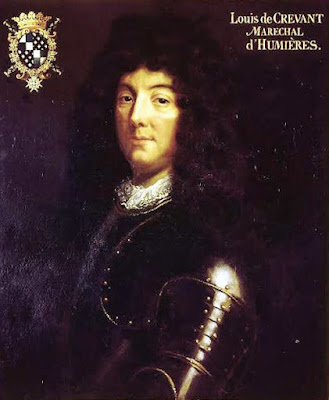 For the figures, I used Wargames Foundry command figures for all of the bases, with a Redoubt Miniatures lance for the standard (of the Gendarmerie) accompanying de Crévant.  I tried to stick to either the colours of the Gendarmerie for the troopers accompanying the commands, or the Royal livery - but in the end, I was carried away by the ease of painting more colourful clothing on a couple of the figures. 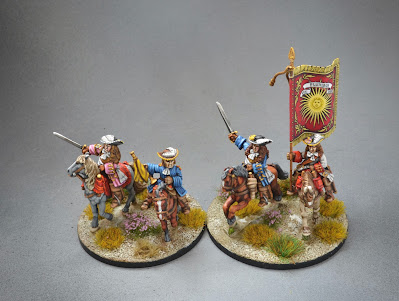 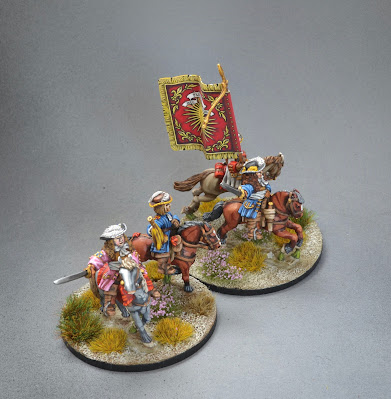 The standards are from GMB Designs, and they're printed with great clarity and a joy to use.  All I needed to do was glue them (with Bostik, a tack-y but flexible glue), and paint the edges to finish them off.  The finials are from Bicorne Miniatures, and the bases were from Warbases. 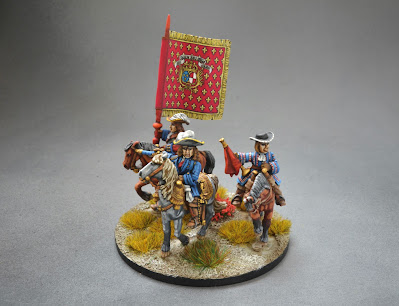 I particularly enjoyed converting and painting one of the brigade commanders. Adding a new arm, and reams of green-stuff lace, ribbons and feathers gets strangely addictive - as you might know from other Blog posts.  I intended the figure in pink to be a young, ambitious and arrogant chevalier - the Marquis of Rouen.  A fictional character to accompany de Crévant, but one who I thought looked the part and who I could have fun with in creating tabletop scenarios.
While the Marquis de Rouen may be fictional, his pedigree is most definitely historical. As a historical aside, I enjoyed reading the list of court favourites of Louis XIII in just the years between 1614 and 1617.  These favourites are listed in Sharon Kettering's book "Power and Reputation at the Court of Louis XIII", with Dr. Kettering stating that the King often engaged with several court favourites at once.  The list of the favourites' names is almost impossible to read without imagining rich velvets, excessive lace and the fine steel rapiers possessed by the highest level of the French nobility: Luynes, Bassompierre, Montpouillan, Courtenvaux, Le Rochefoucauld, La Rocheguyon, La Coudrelle, La Curée, Termes, Vitry and Liancourt.
Those names were behind the type of character I was trying to create in the form of the Marquis de Rouen.  Dr. Kettering mentioned in her book that one of the favourites, the important duc de Luynes, was said, according to a contemporary, to have "thought of nothing but going hunting and dancing in ballets".  Typically French, I thought when reading that line.
But the joke was on me.  Dr Kettering's brilliant book masterfully describes how important such activities were, alongside martial exploits, in the life of a royal favourite of the seventeenth century.  I'll try and review Dr Kettering's book in a future blog post - it's a great read if you enjoy fathoming out how royal politics worked in seventeenth century France. 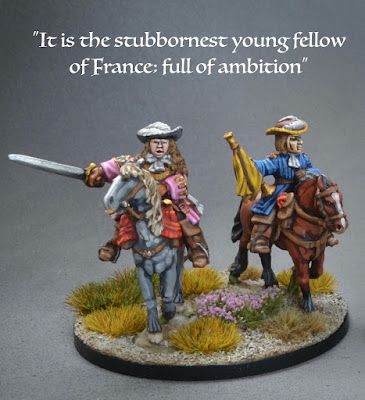 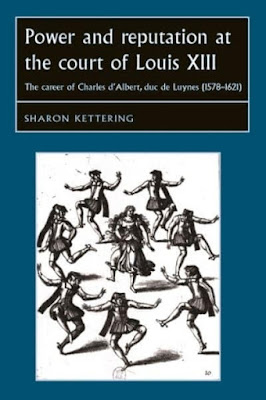 So, they're indulgent, fashionable and French.... and (quite possibly) a stereotypical misrepresentation of the skill and forcefulness of the army of Louis XIV.
All I would say, in my defence, is that in the miniature wargames hobby, sometimes you just have to treat yourself!
*******
Posted by Sidney Roundwood (Admin) at 20:08

Email ThisBlogThis!Share to TwitterShare to FacebookShare to Pinterest
Labels: 17th Century, Laarden 1688, Wargaming with the French