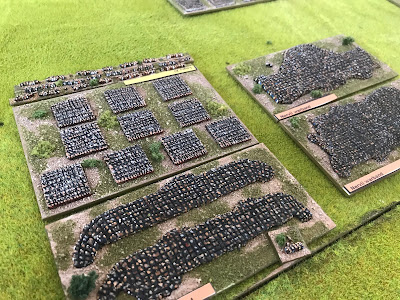 One of the sets of wargaming rules I have been enjoying during lockdown - from a reading and playing perspective - has been "Strength & Honour", a ruleset written by my good friend Mark Backhouse and focusing on HUGE ancient battles.
Mark's rules use very beautifully created 2mm armies - all hand-crafted - to recreate iconic classical battles.  In that micro-scale, famous battles such as Pharsalus, Watling Street or Carrhae are well within the space and expense of any wargamer.  I therefore felt very privileged when Mark offered to stage an online battle for me, from one of Julius Caesar's battles in Gaul, over the Bank Holiday weekend in the UK. 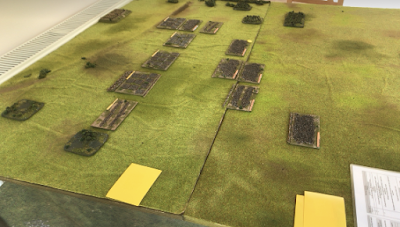 Here's the wargames table before the opposing armies clashed in the main engagement.  On the left is the Roman army, of four Legions and a strong force of allied cavalry, which were under my command. On the right are the tribes of the Nervii, the Viromandui and the Atrebates - all Belgic tribes or varying qualities and experience, which Mark took leadership of.

The "Strength & Honour" rules have many elements to create the 'feel' of an ancient battle, including the need to deploy your forces carefully, and think about how to match those forces against your adversaries.  The deployment phase involves thinking through which units could offer flank and rear support to the front line formations, how they advance on their enemy, which preferred line of march they would take, and where your force would best be concentrated.  All of these aspects of the rules felt perfect for the challenge of manoeuvering huge bodies of troops on an battlefield.

And yes, "Strength & Honour" is the world of massed engagements, not skirmishes.  And, as such, I think I am allowed at least one reference (.... and maybe more... ) to one of the films every wargamer should have in his or her movie collection, which also involves a huge ancient battle between massed armies.  If you've ever imagined yourself commanding the armies in the opening scene of the Ridley Scott film "Gladiator", then "Strength & Honour" might be for you.... 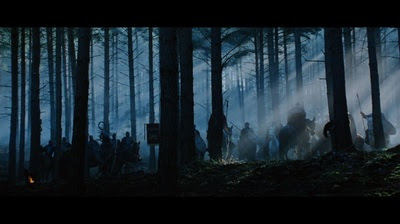 As the commander in "Strength & Honour" - whether King, Emperor or Consul - you're commanding a very large force of anywhere between 10,000 and 100,000 combatants.  The rules force you to think about where, and when, your army is best to be placed to make the all-important melee contacts.  There's a very fun mechanism in which 'reversal of fortunes' can take place when your luck fails (and the dice-Gods do not smile upon you).  Again, all very classically themed, and well thought through.

Mark mentioned to me that some discussions are on-going regarding 2mm figure blocks being commercially produced for the forces on the tabletop.  I think this is a welcome accompaniment to the new rules, but seeing Mark's figure blocks on the table was certainly inspirational.
I've made a few similar bases in 2mm for my Thirty Years War collection and I don't think they are too difficult to produce.  They take a little bit of practice, but anyone who can paint formation numbers of a 28mm miniatures water-bottle would certainly be able to create the army of Pompey or Crassus given a roll of green-stuff putty and a decent sculpting tool.  Parthia, Britannia and Germania, here we come! 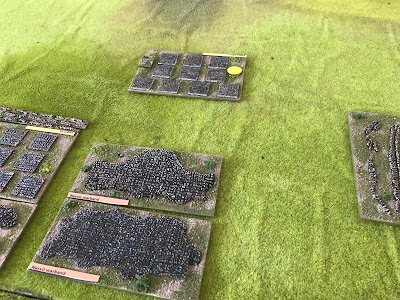 One very good idea is placing unit designations on the various bases.  Perhaps unsurprisingly, one group of 5,000 tribesmen, or Roman Legion, looks pretty much like another.  I've had the same problem in the 2mm scale, and I think the best way to get over the challenge is - as Mark has done - creating small labels for each base.  That makes it easy to swap labels to denote units in different ways (different tribes, commanders, and so on), to help you get the best use of the figure blocks once created. 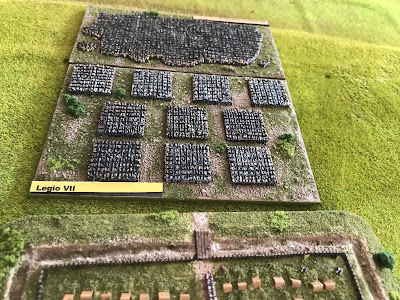 The "Strength & Honour" rules also feature a role for the camps of the opposing armies.  Our game had two fortified camps - one for each side - with additional attractions and challenges for looting and defending.  Again, this seemed perfectly in keeping with the ancients theme.  During the battle each side accumulates 'set backs' (minor retreats and push-backs) and 'disasters' (units routing, commanders being killed, etc.) - and having your camp raided would certainly fall within the more severe of those events.
A particularly fun rules mechanism is that the 'set backs' and 'disasters' in the wargame are delivered on a set of "Strength & Honour" cards, the value of which is not revealed until one side forces their opponent to total up the various values on the back of the cards.  I thought this was a great way of keeping the game unpredictable right until the end of the game.

Mark has a very active Facebook page where you can find out a lot more of the detail in "Strength & Honour".  You can find the Facebook page HERE.
The rules are scheduled for publication later in 2021 from Von Reisswitz Press, the publishing arm of TooFatLardies.  I admit openly that Mark is a great friend and long standing chum of mine - so I am totally biased - but that being said, "Strength & Honour" is a really well thought-through set of large-battle ancients wargames rules, which I'd very much recommend.  Have a look for them and join in the fun.
And remember, Brothers (and Sisters) - what you do on the wargames table in life, echoes for eternity!
Posted by Sidney Roundwood (Admin) at 20:19

Email ThisBlogThis!Share to TwitterShare to FacebookShare to Pinterest
Labels: Wargames;