With apologies for not driving my Tank Corps project on with as much force as I’d like owing to work and family life, here’s the next few parts of “B” Battalion from 1917 completed.

First, there’s the command group consisting of the Prince Henry Vauxhall car, the Battalion Commander and a despatch rider. I was fairly pleased with the way that the Prince Henry Vauxhall, a Matchbox Models of Yesteryear purchase for a couple of quid on EBay, painted up. It really was a joy to dry brush and weather. It’s perhaps slightly out of scale and a little on the large side, although the Sloppy Jalopy chauffeur looks the part. The motorcycle despatch rider from Great War Miniatures was a real joy to paint. 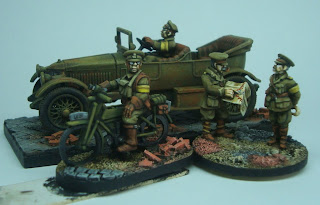 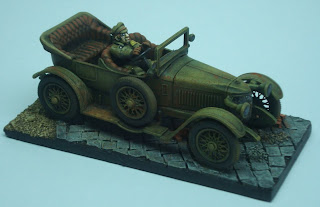 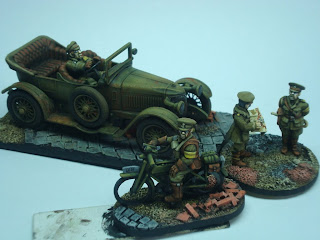 I managed to finish the Austin armoured cars this weekend, working either side of my daughter’s birthday party. I was pretty pleased by how both cars came out in the end. I used the same painting and weathering techniques as I used on the Prince Henry Vauxhall to try and keep the project fairly consistent in its appearance. Just as a reminder of how I started, after thoroughly washing the cars in soapy water I primed and undercoated the cars in Humbrol matt black enamel. 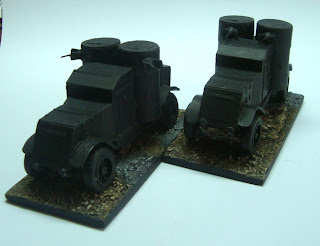 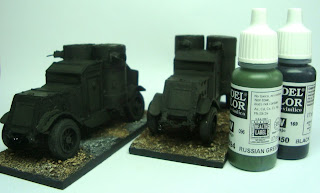 I dry-brushed the cars next with a mix of Vallejo Russian Green and Vallejo German Camo Ochre. I did about four of five dry-brushes, adding progressively more of the ochre each time, trying to get a scrubby, weathered appearance on the exposed parts. 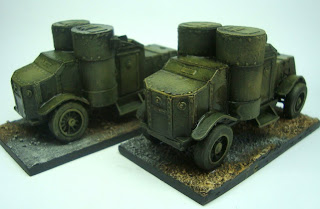 I then tried a weathering technique from the Forgeworld “Imperial Armour Modelling Masterclass, Volume 1”. I loaded up an old brush with a very heavily diluted wash of white spirit/ turpentine thinners with burnt umber oil colour and dark rust weathering powders. I then gently flicked the paint onto the model, trying to focus on areas where rusting would naturally take place. I tried the technique on a spare piece of paper first to make sure the brush wasn’t overloaded. I thought this was a very simple technique, but it did look (at least to my eye) good on the cars. I varied the colour a little by adding progressively less, then more of the weathering pigment in the thinned mix. 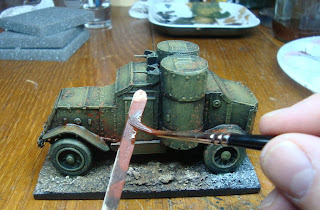 Then, before the paint was fully dry I washed clean thinners over the flicked on paint. Some of the flicked on paint simply disappears, other spots start to seep naturally over the dry-brushed paint work, and the larger spots of the rus/brown umber mix blur on the sides of the car. When you’ve worked about 15 minutes on this process, the result looks a little like this. 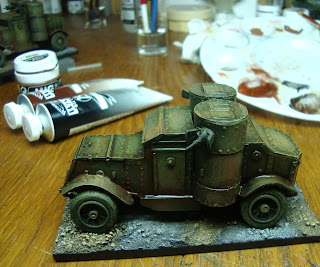 Then I heavily diluted some black oil paint with thinners and washed the mix around all the nooks, crannies, hatches, rivets, engine filters and engineering pits on the cars, watching the mixture slowly pool into the darker areas. Using a fine brush this took about 5-10 minutes per car, although I repeated the process a couple of times to make sure that some of the areas between the armoured turrets were a little darker. 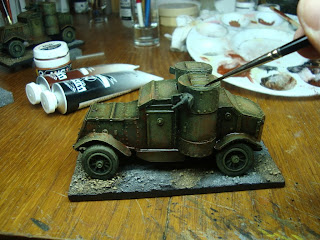 After the thinned black oil paint had dried, I dry-brushed a mixture of Plaka Gelb-braun paint mixed with some weathering pigment from MIG onto the model to simulate mud and dirt accumulated on the steps of the car, and the lower running gear. I love the Plaka range of water based acrylics for this sort of weathering as they are slightly “grainy” in texture and mix beautifully with the weathering powder.

Finally, I painted the tow chains I’d glued on the front of one of the Austins and added the unit identifications on the front engine plate. 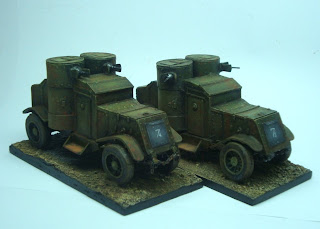 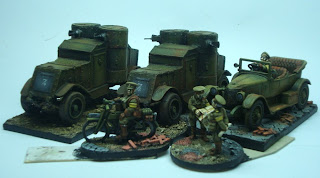 I really enjoyed the painting and weathering of the vehicles, not least because the weathering helped to mask a couple of slight imperfections in the resin cast of the cars. Next up, I need to varnish what I've finished so far, finish off the bases of the vehicles and tank crewmen, paint the remaining converted 6 tank crewmen and then finally paint the four mark IV tanks from the Battalion. I'm hoping to blog a little later this week on how I'm getting on.

Finally, I've arranged last week for the trench terrain to be making a trip to Burton-Upon-Trent in November for a TooFatLardies games day with some friends in the Midlands and North of England. I'll taking up the "Copse 125" terrain boards which shoudl allow for a decent sized (and hopefulyl fairly dramatic) game, so watch out for those in future blogs in October together with some shots of the game being tested.

Posted by Sidney Roundwood at 12:39