I’ve spent a fair part of this year finishing my British and German infantry forces for “Through the Mud and the Blood” and finishing bits and pieces of terrain for my Great War gaming table. Until about a fortnight ago, however, I had done nothing regarding building up a force from the British Tank Corps (formerly the grandly named “Heavy Branch of the Machine Gun Corps”) despite having both the models and figures buried deep in the “Projects Pending” cupboard for almost a year.

About two weeks ago I somehow remembered this, and felt that September was a good time to take this part of my Great War project in hand. I’ve not done a huge amount of AFV modelling before. I have seen the incredible skills of many modellers and wargamers on the internet, so I am approaching the project with a certain amount of nervousness!

I’m also hoping to blog “as I go along” rather than finishing the project, then posting the results from the point of view of having completed everything. I certainly enjoy reading those kind of blogs, so I felt I would give that a go. Again, this makes me feel a little nervous, not least in case it all goes wrong in the second week!

So, with a large number of crossed fingers, here’s where I have got to so far with modelling a section of four tanks from “B” Battalion of the Tank Corps as they might have appeared during the Third Battle of Ypres in the second half of 1917.

Why four tanks, why “B” Battalion and why Passchendaele? Well, I chose this unit because of the really excellent recent account of “B” Battalion in Ian Verrinder’s book “Tank Action in the Great War” (Pen & Sword, 2009). I can thoroughly recommend the book as a well-written and interesting read, with new photographs of the tanks and a very moving piece of Ian’s family history wrapped into the text. I chose the Third Battle of Ypres, Passchendaele, simply because it gave me the chance to field a section of four Mark IV tanks, three of which will “male” (armed with a pair of 6-pounder sponson mounted guns, two sponson- mounted Lewis guns and a forward facing machine gun between the driver and the tank commander) and one “female” (armed with four Lewis machine guns mounted in the sponsons, and a forward facing machine gun). The four-tank section gave me the chance to game the actions around Ypres, as well as the actions in the Battle of Cambrai in which “B” Battalion participated, but where sections of three tanks seemed to have been used more.

I thought I would start with a couple of shots of the inspiration for the project. First, the historical books which I’ve been reading over the past year on the Tank Corps. I’m hardly an erudite historian of the great War. Again, there are so many people out there who are. All I can wish is that, when I inevitably go wrong with the history, please let me know and I promise to learn from my mistakes!! And now some more modern inspiration, which I possibly feel on slightly safer ground with.... 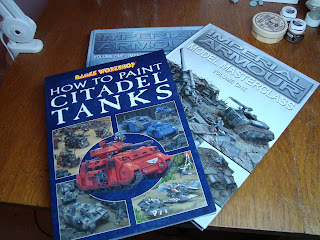 By way of introduction, there were eight crewmen in each of the Mark IV tanks. Control of each tank was by 4 men: a commander, a driver and two secondary gearsmen. Each tank also had four gunners. While I don’t envisage all 32 crewmen from the four tanks being out on the table at the same time (heaven forbid all the tanks “ditch” at once), I wanted to make sure that I had sufficient figures to cover at least a couple of the tanks breaking down and the crews leaving the tanks to return to their own lines, or forming ad-hoc Lewis gun parties. The figures are Great War Miniatures, with Litko bases (with hexagonal bases denoting "Big Men" in the "Through the Mud and the Blood" rules). The Great War Miniatures figures to need a little time to clean and prepare, but I feel they repay the attention. You’ll also spot I’ve added a company commander (a Major) and a battalion staff officer, as well as a motorcycle despatch rider. Like the Prince Henry Vauxhall staff car which comes later in this post, these additional non-crew figures are really for “fluff”, but there may be a scenario I can use them in somewhere. They’re lovely figures, anyway. Here’s the shots of the undercoated figures (and yes, that is a stray German anti-tank rifleman in the background)..... 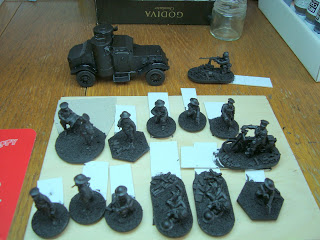 Here’s the figures with their faces done and base coats of some of the uniforms. I wanted to paint a mixture of overalls and uniforms on the tank crew, both being evident in quite a few photos in the books. My first thought was that the Tank Corps crewmen wore black overalls, but I seem to have gone wrong in my research. I found out this weekend that the overalls were a mixture of khaki, tan and dark tan. How long they may have stayed this way is another matter. Lieutenant A.A. Dalby of “B” Battalion wrote home in January 1917 that “I wish you could see me come in from my present course. Clad in overalls (khaki) and absolutely one mass of grease, oil and dirt” (“Tank Action in the Great War”, page 26). There is also a magnificent photograph of Second-Lieutenant Reginald Lyles at the Tank Museum at Bovington wearing what appears to be a pair of leather overalls, suggesting that officers might well have supplemented standard overalls from time to time. 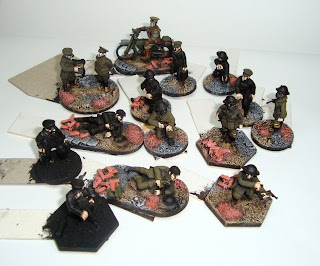 I also wanted to add a couple of casualty bases to place besides the tank crews to signify “shock” in the "Through the Mud and the Blood" rules. “Shock” could be inflicted on the crews if they are unfortunate enough to be outside the tanks once the tanks “ditch” in rough terrain, break down or are disabled by the enemy. There are some very disturbing images of dead tank crews in contemporary photographs, particularly of badly burnt crewmen (photograph page 14 in “Tank Action in the Great War”). I would never want to model such grim material, but didn’t want to leave out a reminder of the horrific casualties the early tank crews suffered. So, here’s some generic casualty figures which I purchased from Steve (“Silent Invader”) on Lead Adventure Forum, with some suitably “tank focused” bits of battlefield debris manufactured from plasticard, plastic strip, bricks (matchsticks cut up), picture wire, Styrofoam (petrol cans) and a selection of resin and metal bits (revolver, ammunition box). 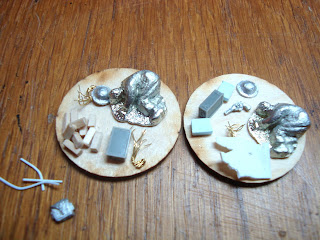 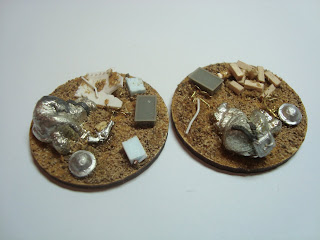 Now on to the four tanks themselves, which you can see I have not even started. I've put two in the picture, a Mark IV female on the left and a male Mark IV on the right. They’re both resin models from Great War Miniatures, being well detailed and finely cast. 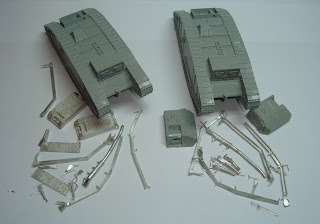 I also wanted to paint a couple of Austin armoured cars at the same time. These were not part of “B” Battalion, but these cars were operated by one of the Tank Corps battalions in 1918. I think adding the armoured cars to my British forces should give some interesting scenarios. 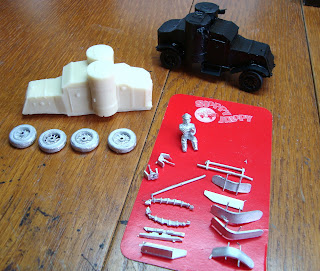 Both are from Sloppy Jalopy in the UK. I managed to assemble both in about a couple of hours, the second one being quicker than the first. I found the suspension on the Austins a little tricky at first to glue on, having to balance the model carefully upside down. 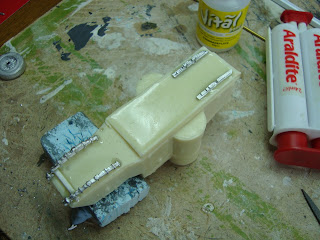 Once the model is stable, however, the suspension, the axle and the wheels glue on pretty easily. 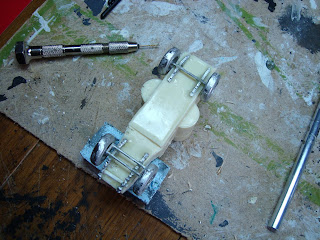 I tend to use an epoxy resin for modelling resin/metal kits. Perhaps this is force of habit, but it also seems to me to give a better, slightly less brittle join than superglue. Perhaps this is just another of my legacies form the 1980s!

The door-shelf on the Austin glues on quite well, as does the plate below the door on the other side of the car. Unfortunately, the Sloppy Jalopy models don’t come with instructions, so searching some images on the internet to try and find the exact configuration of the kit components is time well spent. I wanted to ensure that the shelf and metal side plate stayed in place and I supported both with a wadge of green-stuff as well as gluing both the metal shelf and plate to the resin car with the expoy. 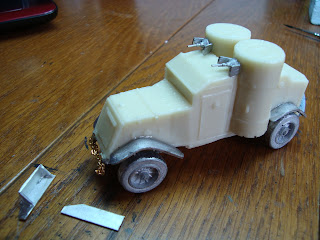 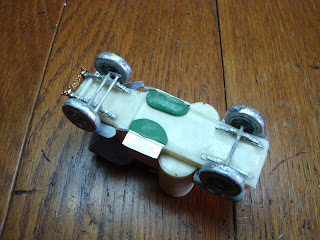 All in all, I thought that the Sloppy Jalopy Austin armoured car kit was good value for money and went together reasonably well. I did need to some work on it to make it robust for the tabletop, and its perhaps fair to say that it’s not a ideal starting resin model for beginners. By contrast, (on the plus side) there are very few parts to go badly wrong. I also got great service from Richard at Sloppy Jalopy, and I think that always sets you in a good frame of mind to make a model.

I also added a 1914 Prince Henry Vauxhall to the force, this really being a little “fluff” for the back rank of the wargames table. My idea was to possibly use this in a scenario to signify a company headquarters, especially with the two senior officers and the motorcycle despatch rider. The model was “Y-02-3” in the Matchbox Models of Yesteryear range, picked up on Ebay. 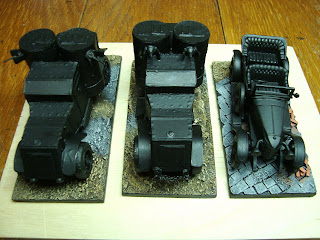 The bases of the cars are all marine plywood, and then textured using fine gravel and cardboard. The random bricks dotted around all the bases are cut matchsticks. I like the idea of a more “industrial” feel to my Great War terrain, and have been adding a few ruined factories and commercial buildings over the past few months for a contrast to the more open terrain boards we built last year. I painted the bases completely before pinning and gluing the primed and undercoated vehicles to the bases.

Well, that’s my Tank Corps work-in-progress started. I’ve done some more work over this weekend on the figures, and I’ll hopefully post later this week to let you see things moving along a little further. For anyone wanting to see additional work-in-progress pictures, I’ve posted some more on my Flickr page – just follow the link on the blog.
Posted by Sidney Roundwood at 11:04