After this weekend and last night, the Tank Corps crewmen are about 90% of the way there. The photographs didn't really come out as well as I would have liked, but I have posted them in the interests of giving a quick “work in progress” set of pictures. I promise I shall take a proper, “in theme” set of photographs when the Tank Corps project is finished. Anyway, here's 12 Tank Corps crewmen (with another 6 awaiting completion), all from Great War Miniatures. Only one has been slightly converted in the group below (the officer with the tan overalls, of which more below). 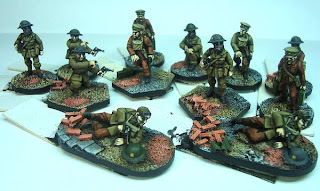 You’ll see that I painted one of the officers in a darker coloured set of overalls, trying to replicate a well known photograph of Second-Lieutenant Reginald Lyles, MC at the Tank Museum at Bovington wearing what appears to be a pair of leather overalls. 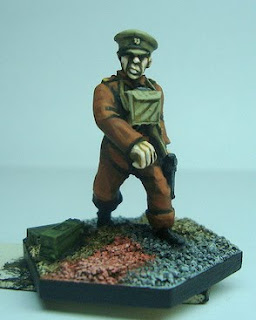 I’m guessing that officers with a bit of cash to spare might well have supplemented their standard uniform with such items when on leave. Certainly there are many adverts in Peter Doyles’ splendid (and reasonably priced) book “Tommy's War: British Military Memorabilia, 1914-1918” for items such as trench periscopes, raincoats and revolvers. It seems fairly reasonably that an officer recently transferred to the Tank Corps might have wanted to personalise his kit with the addition of privately purchased overalls. I’m hoping to get a “leathery” look for the officer’s overalls with the help of some satin varnish.

I also finished up the casualty bases. I’ve no idea if the wiring used in the Mark IV tanks was coloured. I’m guessing probably not, but I felt it made a nice touch to try and colour the wiring (green and red stripes) which is scattered on the ground from a destroyed or badly damaged tank, even if just to distinguish the wiring (made from picture hanging wire) from grass scatter on other bases! 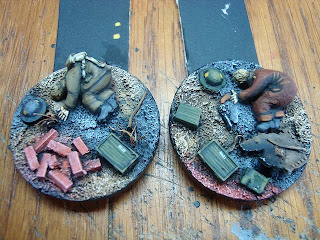 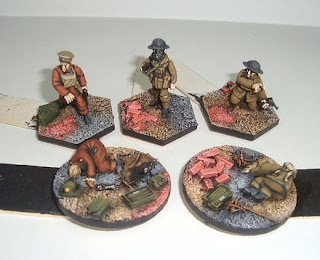 Posted by Sidney Roundwood at 14:59