There’s not actually much painting in the third, and final, part of my series on painting Great War German Infantry.  As you’ll remember from last time, the Stellungsbattalionkämpfer figures were at least 95% finished at the middle of last week.
I did, however, get the chance to add a German command group, and finish some casualty figures which have been on the painting table for a while. 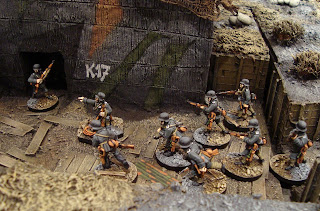 So, what changes did I actually make to the Stellungsbattalionkämpfer?


Not much.  All I added to the figures were the painting for the medal ribbon on the NCO, some Vallejo German Uniform Green piping on a couple of the figures’ cuffs and some stubble on the faces of the troops. I wanted them to look a little grimy, perhaps even worn-down, through being in the front line.  This was pretty simple – just heavily dilute Vallejo black or German Grey (I prefer the latter) with water.  When I mention diluted, I mean very, very diluted. 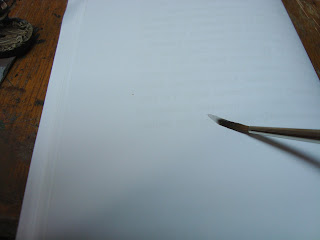 You want to almost get to the point that there’s hardly any pigment in the water.  Then, wash that over the jaw of the figures a few times.  The grimy stubble look eventually builds up.  As ever, use in moderation as a little of this sort of effect tends to go a long way – unless, of course, you want your frontschwein looking as if they’ve not shaved for several days!


I then finished off a couple of casualty bases, one with a “shock” or casualty dice in the rear, and one without. 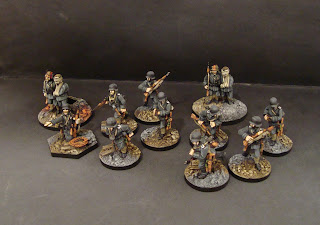 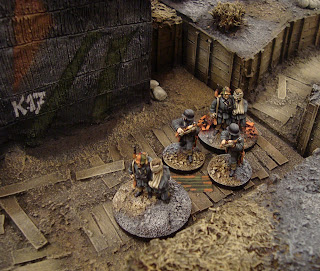 And then I painted through a Great War Miniatures German Command Set. This is really a lovely piece, and was really fun to do. The rather jazzy German officers are taken from the German Army 1914-1918 Part 2 Osprey Man At Arms book. I thought the base could serve as a battalion command, or Kämpftruppenkommandeur figure for larger games and I’d planned to do it as part of the figures to accompany the large bunker, das Rattenkeller, I painted in the early summer. Then, just for your enjoyment dear readers, I took a few snaps on the terrain that the figures were always intended to inhabit. 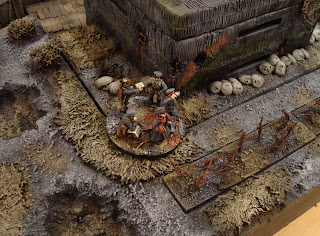 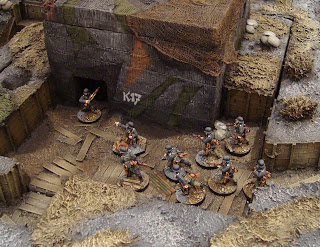 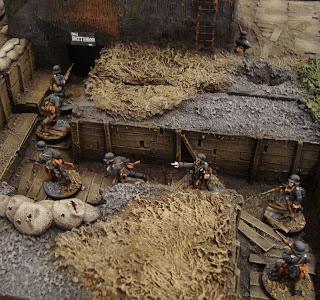 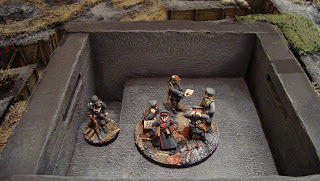 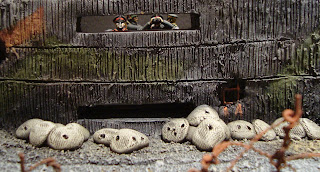 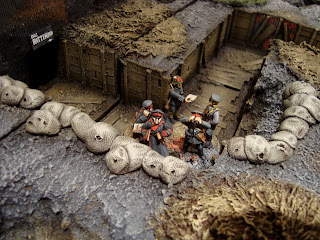 Posted by Sidney Roundwood at 20:56